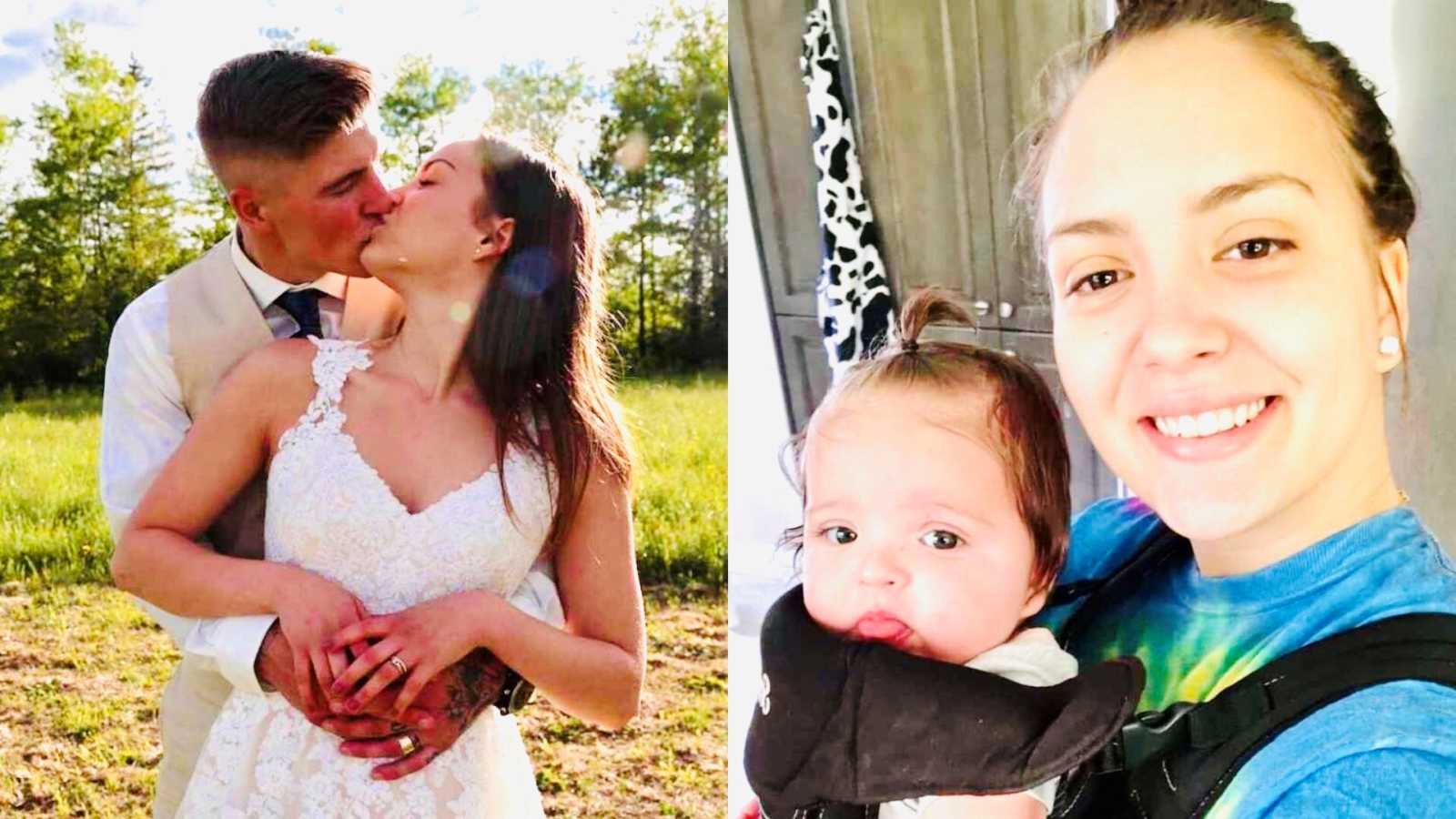 “Three months prior to finding out I was pregnant, I was healthy, fit, and mentally stable. I was loving my life and learning so much about myself! My husband is in the military and in 2017, we were posted from Fredericton, NB (the town we met in and adore so much) to Petawawa, ON (an even smaller town that we would soon make our very first home).

We had been living in Petawawa for about a year when my husband received his deployment message. He was to go to Latvia in June of 2019 for six months. His trip was split up as follows: he would leave for three months, come home and rest for two weeks, and go back for another three months. Distance wasn’t new to our relationship, and in the past had only served us in positive ways, so this wasn’t something we were overly concerned about. Besides, I’ve always found being by myself therapeutic and essential for my growth.

June came around and Hayden, my husband, went overseas. I adapted to my new lifestyle quickly and learned independence, how to care for myself, and how to have healthy and happy friendships as an adult. These same three months looked very different for Hayden. He was living through a major reshape and milestone in his career and life. One of the things I’ve learned from our four years of him being in the military is that when something happens in his job, it has a massive impact on every part of our personal lives. Finally, when his two-week break arrived, our mental states couldn’t have been more different. We were not at all the same people as when we had said goodbye.

The first day he came home was when we got pregnant. We’d been apart for three months straight–can you really blame us? It seemed like I blinked and our time together had come to an end. It was now time to get ready for the next three months of tour. It was early morning and the sun was just coming up. We were beginning to pack our car for the airport to say our goodbyes and I remember thinking how odd it was that I woke up feeling so nauseous. Coincidentally, months prior, Hayden and I had bought a pregnancy test as a joke between the two of us and for some reason, it was the first thing I thought to look for when I woke up that morning.

We decided we might as well take the test. I peed on the stick, set it up upside down on our sink, and walked circles around our tiny living room for what seemed like an hour. After an eternity (or 10 minutes), we decided it was time to look at the results. I looked down and saw two lines staring back into my soul. At that moment my first three thoughts, in order, were, ‘What the f*ck?’ ‘I’m not ready,’ and ‘I was not expecting this.’ It was a good thing I was sitting down because I immediately felt lightheaded and fell on my cold bathroom floor, bawling. Hayden sat down next to me, wrapped his arms around me and asked, ‘What do you want to do?,’ while repeatedly saying, ‘It’s going to be okay.’ I don’t remember much of what came after that, but we had to get on the road to make it for Hayden’s flight. There wasn’t much time to dwell on our thoughts. The two-hour car ride to Ottawa felt like 5 minutes and 20 years all at once. Our life had taken a major shift. Before I knew it, Hayden was gone and I was on my way back home.

Like I said, distance wasn’t new to our relationship. Even in our short two years in Petawawa, Hayden was gone so, so, much. This forced me to grow really close to a couple of women that greatly impacted my life, and would teach me a lot about friendships. During our time there I met one of my very best friends, Marlee. Anytime Hayden would have to leave for work, I would pick her up and she would stay over. Likewise, we had already planned for her to stay at my house when Hayden went back overseas.

Marlee and I got together the next day and I told her I was pregnant. She was over-the-moon excited and extremely supportive. We spent that whole day together talking about what I had to do and about the future. The next morning with her by my side, I went to the hospital to confirm my pregnancy. As I sat in the waiting room waiting for my name to be called, Jess and Aaron, a couple I had briefly met months earlier, walked in. As we exchanged hellos, I learned that they too were there to confirm their pregnancy. Crazy how life works, isn’t it? In the coming months, Jess would introduce me to a pregnancy group that would be my saving grace. Being around women who were experiencing pregnancy at the same time I was, was so powerful. As I write this now, I see how God placed everything into my life when I needed it most.

That first hospital visit left me feeling alienated and empty. I soon found out this would be a recurring feeling throughout my pregnancy. The first doctor I spoke with was simply an a**hole. After I informed him (multiple times) that I had already made the decision to continue with the pregnancy, he proceeded to give me his personal opinion, which was complete disapproval and shame in my decision. He thought I was too young and wanted us out of his office as fast as possible. I don’t know how I would have made it through that day without my friend.

The following months were rough. The mental stability I’d fought so hard for after living the past two years of my life depressed, crumbled in front of my very own eyes. I decided to quit my job and drive my pregnant self, along with my two dogs, 15 hours to be with my parents. Pregnancy made me feel so vulnerable and I couldn’t handle going through it alone. I lived with my mom and dad until Hayden came back. During this time, depression crept back into my life without me realizing it. This, along with the emotional roller coaster that is pregnancy hormones, made me completely and utterly unrecognizable to myself.

When Hayden came back for good and we began to settle in, we realized that being apart for six months had really taken a toll on our relationship and was a lot tougher than we had anticipated. We’d both been through so much, that by the end of it, it felt like we were entirely different people.

Since then, we’ve been learning that love is ultimately a choice and it’s a choice you have to make every single day. As young adults, we are bound to change. Our experiences are constantly re-shaping us and we are continuously evolving, choosing different paths with each new chapter. We had to decide whether we wanted to grow together or grow apart.

We decided to marry on the afternoon of June 3, 2017. It was the best day of my life. I was 19 years old and he was 20 and we had never been so sure about our decision. We moved away from our hometown two days after our wedding, became pregnant in the middle of him being overseas, moved back home to Fredericton while I was 8 months pregnant, and gave birth four weeks earlier than expected. We hadn’t even unpacked anything in our new home! I’m proud of my journey into womanhood and marriage. The last couple of years have been filled with a multitude of life-defining moments for both of us, but becoming parents definitely takes the cake.

Being pregnant and birthing our child was an experience like no other. It showed me the lowest of the lows, the highest of the highs, and a strength I didn’t know I had. Motherhood has made me who I am today and will continue to shape me for the rest of my life. It has brought me battles I didn’t know I would have to face and a power I would have never known.”

This story was submitted to Love What Matters by Ivana Barroeta from Oromocto, New Brunswick. You can follow their journey on Instagram and on their website. Do you have a similar experience? We’d like to hear about your important journey. Submit your own story here. Be sure to subscribe to our free email newsletter for our best stories, and YouTube for our best videos.

‘Could you be pregnant?’ I mean yeah, I guess I could be, but I’m pretty sure I’m not. I decided to put ‘Yes’ for the answer.’: Woman gets surprise pregnancy news at dentist

‘Yes, this is our daughter.’ My husband cut me off. I could hear him telling everyone, ‘I’m going to be a dad!’: Military family adopts child who was ‘always intended to be ours’