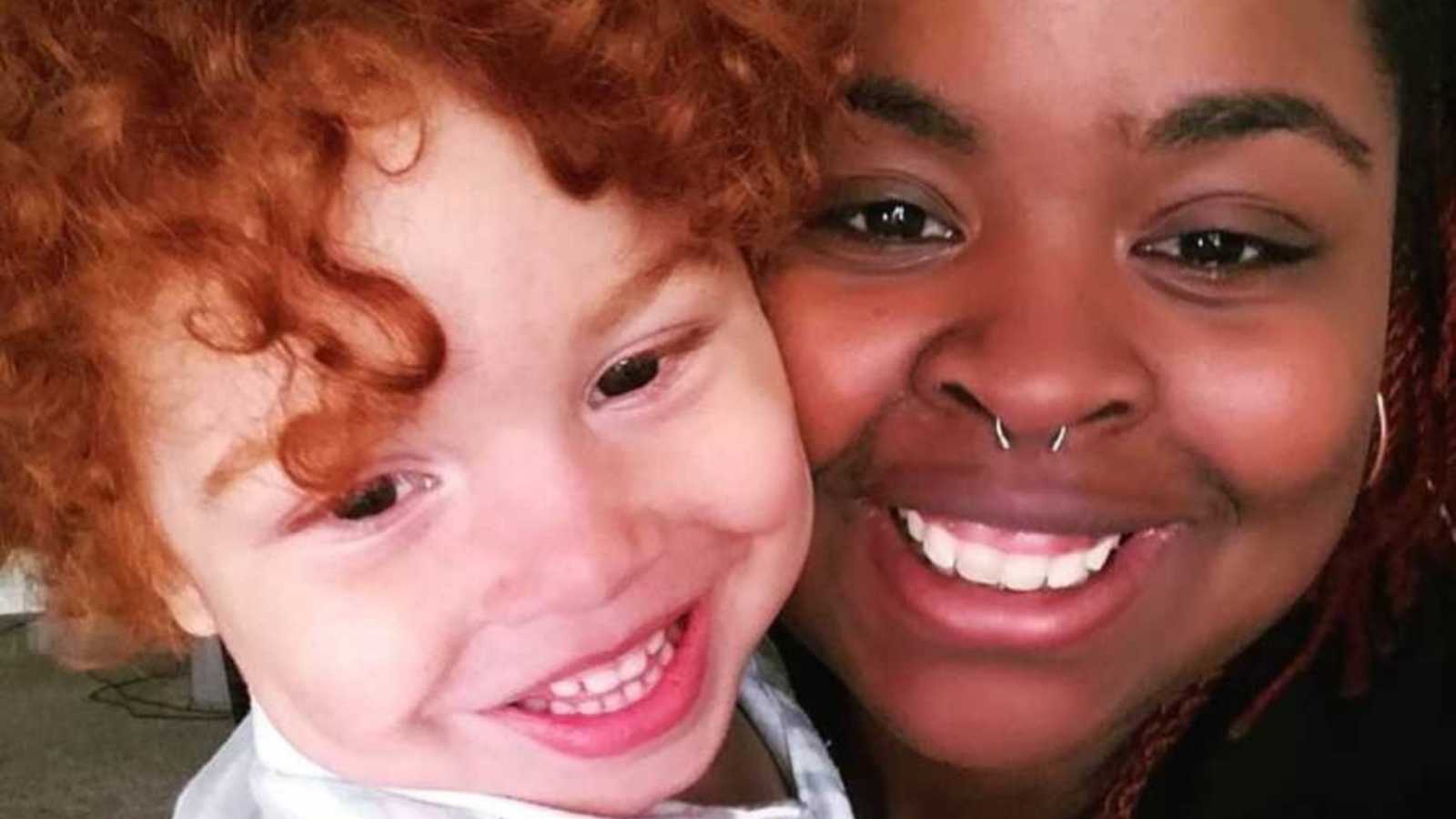 “I thought being a part of the United States Navy was the most amazing thing that had ever happened to me. Then, I became a mother. I didn’t think it could get any better. That is until my son Matthew was born. When, one became two. Everything was perfect throughout the entire pregnancy. What else could there be? My sister in law took the ultrasound pictures that showed a perfectly healthy beautiful baby boy. With lots of hair. What we didn’t know, was that hair was RED! Yes, you heard that right. Red hair. I couldn’t believe it, and neither could the nurses. As an African American woman, that was the last thing I was expecting!

The moment he was born the first thing I heard was, ‘Oh my God.’ ‘Oh my god’ is literally the last thing any woman, especially one who just spent 11 hours delivering a baby, wants to hear. I know that Naval Medical Center Portsmouth is a teaching hospital, but before I could go into a full-blown panic the nurse continued, ‘he has RED HAIR!’ I paused for a solid 10 seconds before I responded, ‘no, just wash him a few times.’ The nurse washed him 3 times before she came back over and said, ‘No mama, you’ve got a little ginger.’

Everyone was in awe of him. Partly because he was absolutely stunning, but mostly because a white red-headed baby just came out of an African American woman. Trust me, I was shocked too. Once they put him in my arms, I’d forgotten all about the hair color until someone brought it up. I still do and he’s 6 now. Nurses and doctors from all over the OB floor came to see him. They had never seen anything like it.

Of course there was speculation. I can’t count how many times I had to explain that he wasn’t adopted, wasn’t my stepson, and wasn’t albino. That I was his mom and not the aunt, Godmother, or the nanny. No one ever believes he’s mine. Or if they do, the next assumption is, ‘Oh he must get his red hair from his father.’ Actually both parents have to carry the MC1R gene for the child to have it.

There has been mostly positive feedback. People are always shocked by his hair, especially when we are together. Usually I hear all about the redheaded family tree from every stranger I meet. Their friends, sisters, uncles, cousins, brother had red hair. I just smile and listen. I don’t usually mind, except when I’m in a hurry or I get stopped going down every aisle of the grocery store. Everyone likes to touch his hair. It used to bother me, because who just walks up and randomly touches someone’s child? But I’ve gotten to where I politely ask them not to. Most of them ‘just can’t help themselves’. And truthfully Matthew loves the attention.

But there will always be people who are negative and rude. My two boys and I were waiting in line to get a pizza one day when a lady asked if I liked being the nanny. It didn’t really register with me what she said at first, so I replied, ‘I don’t know ,I’ve never thought about it before.’ She said, ‘Well aren’t you their nanny?’ I told her, ‘No, they’re my boys.’ She looked at Adam with his olive skin and dark brown hair and said, ‘Maybe him, but not the little white boy.’ It made me so angry. I took a deep breath and said, ‘I don’t have to explain myself to you ma’am,’ and ordered my pizza. She got mad, took her pizza, and stormed out. After she left, I got an applause from the people sitting in the lobby. One woman came up to me and said, ‘I wouldn’t have handled it like that. Good on you.’

There was one time though where I was discriminated against. I was taking Matthew out of the front of the cart at Walmart when his shoe fell off. I tried putting it back on, but as little boys do, he thought it was a game. He started kicking his feet so I couldn’t get it back on. Another girl my age saw and came to help. I was of course thankful. After we managed to get his shoe back on I thanked her. She turned around to talk to her friend and I walked off with my son. An older white woman saw me walk away with him and called the police on me. She thought I was stealing that woman’s child. I was questioned by the police. I just came from the doctor’s office so I had his birth certificate with me. The police officer didn’t believe me. He was about to call child services and arrest me when the young lady who had helped me saw what was happening. If she wasn’t there to help, I don’t know what would have happened! It was the most terrifying thing I’ve ever experienced.

The moment that hurt the most was when Matthew came home crying because the kids on his bus said I wasn’t his real mother because I was black and I didn’t have red hair. To a 5-year-old! For about a week he asked every red-haired woman if she was his mother. It was the most hurtful and embarrassing moment of my life. I didn’t know what to do. My mom told me to be patient and pray. Also, to sit him down and explain it the best I could. Not to get mad. To just breathe. So that’s what I did. While it worked, it still hurt. My oldest son came up with a great idea. ‘Why don’t we dye our hair red like Matthew’s?!’ It really touched my heart that instead of saying, ‘let’s change Matthew’s hair to be like ours,’ he said ‘let’s change our hair to be like his!’ That was such a selfless act coming from a 7-year-old! As soon as Matthew saw the reveal, he immediately said, ‘Now you look like me!’ It made me the happiest I’d been in such a long time. For something so small to make him so happy was one of the greatest joys in my life!

We have tried to trace back the lineage on both sides of our family 5 generations and we have found nothing. Not a single person on either side of our family has had red hair. Not one. My next step is to do an official Ancestry and a 23andMe test for both the boys and me. I am very determined to find out so I can actually have an answer for when people ask, ‘where did he get his red hair?!’

It is hard having interracial children. When people question you at every turn. Look twice. Whisper. I wonder if my oldest son will have a harder life than his brother because of the color of his skin. Also, because of his red hair, Matthew tends to get majority of the attention. Adam has gotten really good at making himself known. When a stranger goes, ‘Oh my God you have beautiful red hair!,’ he makes sure to abruptly announce, ‘Yep! And mine is black!,’ while pointing at his curls. Gets them every time.

I try and think of all the positive things and all the blessings that have happened in our lives. I made them an Instagram page and I’m working hard to get them into modeling. They have just started cub scouts and will be joining gymnastics in the spring.

I was nervous about having two children within a year of each other, but it is the best thing I’ve ever done. They’re glued at the hip. Best friends. My best friends.”

This story was submitted to Love What Matters by Ebony Lumpkin, 29, of Virginia Beach, Virginia. You can follow their family’s journey on TikTok. Submit your own story here, and subscribe to our best stories in our free newsletter here.

‘Our baby had a head full of hair — WHITE AS SNOW’: Mom’s shocked reaction to albino newborn