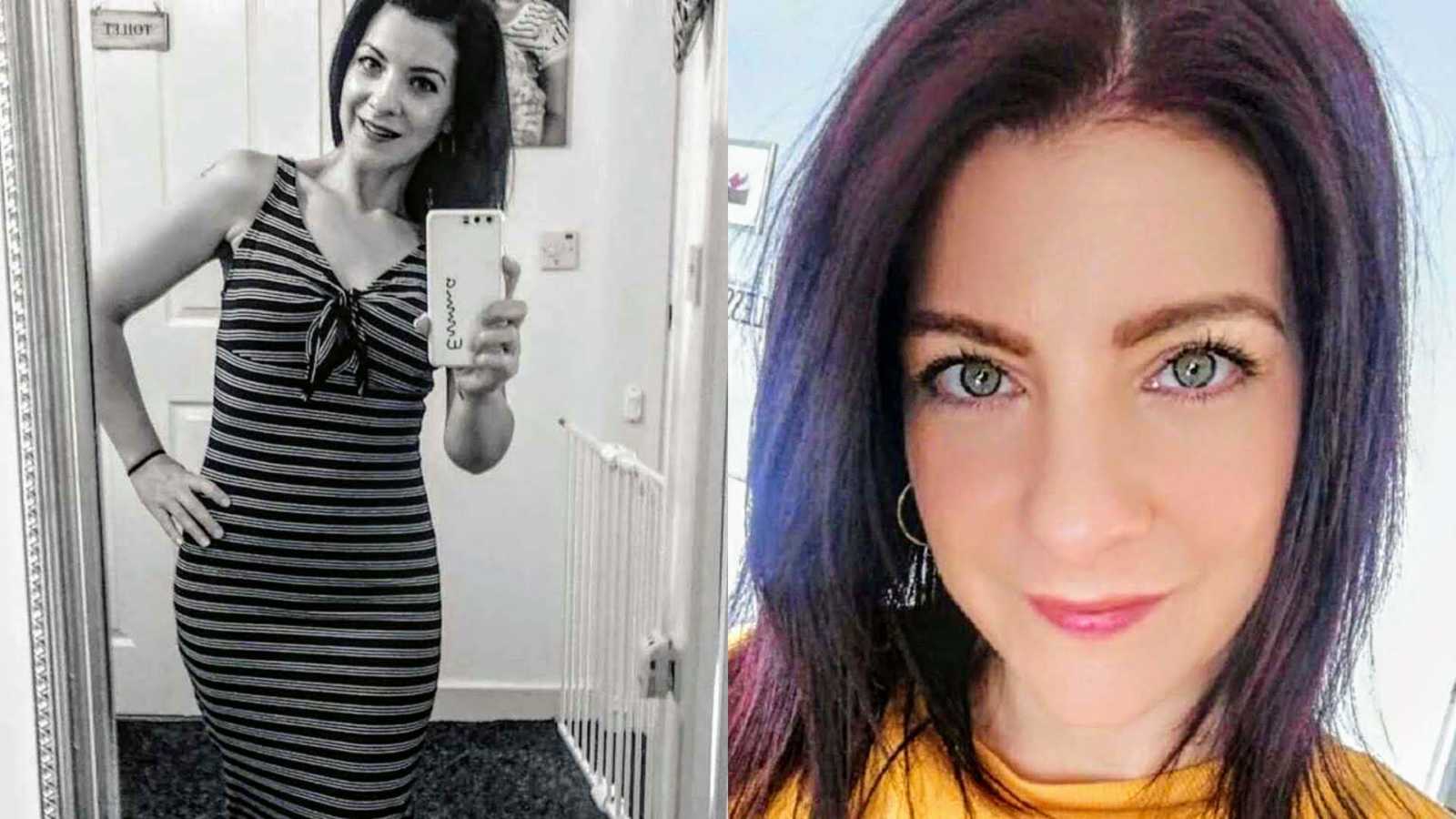 “I was dozing in bed when I felt my boyfriend unwrap his arms from my waist to grab something from the bedside table. Turning over, I saw Dave, 34, was smiling, holding a ring box. ‘Will you marry me?,’ he said.

From the moment we’d met months earlier, I’d suspected Dave might be The One. He was cute, charming, funny, and swept me off my feet. Now, we were getting married! ‘Let’s do it,’ I squealed.

The following year, we tied the knot in a lovely intimate ceremony, and just nine months later, I gave birth to our daughter, Maddy. Dave was a doting dad and I loved my little family. I thought to myself, ‘Could life get better?’ But after years of trying for another baby without success, I was starting to believe we’d always be a family of three. ‘It’s alright, babe,’ Dave said. ‘We’ll just keep trying.’ I felt so lucky to be married to such a supportive man.

One day, I heard that new neighbors had moved into our block of apartments. When I spotted a new face in the corridor, I said hello and introduced myself. ‘I’m Kayleigh,’ she replied, smiling. She explained she and her boyfriend Ben, both 26, had moved in with their little girl, Angel.

After that, we all got on so well that most weekends we’d hang out as a group. Kayleigh and I became inseparable. Just when I thought life couldn’t get any better, I found out I was pregnant. Dave and I were over the moon. Kayleigh was the very first person I told.

‘That’s great, babe!’ She squealed when I told her. ‘I know how much you guys wanted this.’ She was such a support, dragging me off to go baby shopping on weekends.

Anaiya was born later that year and she was gorgeous. ‘Anytime you want Ben and I to babysit, we’d be happy to,’ Kayleigh grinned. But just one month later, she dropped a bombshell. She and Ben had split up. ‘He’s moved out,’ she said, tearfully. I felt so sorry for her. ‘You don’t need him,’ I said, hugging her. ‘You’ve got Dave and me.’

Kayleigh went to stay with her mom for a while. When she returned it was as if Ben had never existed. Dave would help her with a few odd jobs now and then. There always seemed to be something she needed him to fix. Oftentimes, he’d be too busy to help me out at home. But when I complained, he rolled his eyes. ‘She needs me to help put up her new bed,’ he said. ‘I’m only down the corridor. What’s the problem?’

‘Again?!’ I said. ‘You’re always down there. Has she really got no one else who can help?’ Dave looked at me like I was crazy. ‘You’re not really thinking that, are you?’ He laughed. ‘You’ve got nothing to worry about.’ Then, he pecked me on the cheek and left.

If Dave wasn’t over at Kayleigh’s, she was over at our place. I’d often walk in from work and find them giggling together in the kitchen. ‘Hope I’m not interrupting,’ I’d say sarcastically. ‘Course not,’ Kayleigh would smile. ‘Come join us!’ I thought to myself, ‘Yes, I will. This is my house, remember?’

It came to a point where my suspicions just got too strong and I asked her if she was sleeping with my husband.  She looked me straight in the eye and confidently said, ‘No. But he’d be all mine if I wanted him.’ I was totally shocked by her response. I told Dave and he went crazy! He asked her why she would say something like that and reassured me nothing was going on between them.

A few days later, Dave was at Kayleigh’s house doing some odd job, yet again. That day, Kayleigh’s sister Shannon called me. ‘I thought you should know…’ she began. ‘It’s Kayleigh and Dave…they’re sleeping together.’ Her words hung in the air for what felt like eternity. Two of the people I trusted most had betrayed me so cruelly.

I hung up and shakily dialed Dave’s number. ‘I know everything,’ I seethed. ‘You tried to make out like I was crazy, but I know you’ve slept with her!’ At first he denied it, but I explained that Shannon called me and the truth came out. ‘It’s true, we’ve been having a relationship,’ he said. ‘I’m sorry, Em.’

Their affair had been going on for over a month. He said sorry over and over, but it was clear it was Kayleigh he wanted. I felt sick remembering how he’d put up her bed, how he’d made an excuse a bit later to go and get his keys that he’d coincidentally left there. My baby was just four months old and she needed her daddy – but he was too busy with the woman four doors down.

I kicked Dave out until I found somewhere else for me and the kids to live. Kayleigh immediately updated her relationship status on Facebook, saying she and Dave had been in a relationship since a month before I’d found out.

As soon as the kids and I moved out, Dave and Kayleigh moved in. Somehow, they literally ended up in the news. Dave said, ‘Of course I regret the way it happened. What do you want me to say?’ Kayleigh said, ‘Yes, the way it happened was wrong, but we’re happy and want to get on with things! I’m finding it funny to be honest. Tell her well done for me.’ I couldn’t wait for a divorce.

It’s been 3 years since I found out about Dave and Kayleigh’s affair. We are now divorced. They stayed together for two years but are no longer in a relationship. It took me a very long time to even remotely come to terms with what they did to me, to my family. Every single day I would cry, feel anger and hate towards them. But mostly I hated myself. Hated myself for not being a better wife. I felt ugly, fat, and not good enough to keep him interested. I thought it was my fault.

I had many ‘run-ins’ with them and some horrible things were said, particularly by Kayleigh. As time went on, I began to realize HE was the one with the problems, not me! Normal people don’t exactly go around destroying other people’s lives. The more I look back on our 11 years together, the more it dawned on me that I was actually his rock.  I was always there when he needed me, forgave every mistake he made, loved him unconditionally. And he repaid me by doing this. By this point, I couldn’t help but think, ‘Yep! Definitely him who has the issues.’

However, it still took its toll on my self-confidence. I lost weight through the stress of it all, but I still hated the way I looked. I joined a local slimming club which also did wonders for the social aspect of my life, and I lost a few more pounds.

I have recently joined a gym and have personal training sessions. I found a new love for fitness and have met some wonderful people at the gym. My confidence is at the best it’s ever been!

Ultimately, my beautiful daughters are what pulled me through all of this. Before anything else, I am a mommy. Giving up was not an option. I want my children to grow up to be strong, independent women. So, I had to show them that no one has the right to make them feel any less than the wonderful girls that they are.

Today, I still get flashbacks every now and then. Her words still ring in my head, but I really do believe they did me a favor. I know now that I deserve to be loved and to be ‘enough’ for someone. To anyone who has had to face the pain of heartbreak such as mine, my advice would be to cry. Cry as much as you need to and don’t be ashamed of it! Then, remember YOU ARE NOT THE PROBLEM and there is nothing wrong with you.

Keep going. You are stronger than you think. Find an end goal and focus yourself on that. Don’t lock yourself away. Spend time with your family and friends. It will take time and it won’t always be easy, but before you know it life will be good again, and you’ll be healed.”

This story was submitted to Love What Matters by Emma S. Submit your own story here and be sure to subscribe to our free email newsletter for our best stories.

‘The text was simple: ‘Later 2nite.’ He was my husband. She was my great friend. All he could muster was, ‘At least I come home to the family.’

‘I’ve loved my ex for 5 years.’ I was in the toilet, vomiting. I watched the father of my 3 kids die right in front of me.’: 40-year-old woman finds happy ending after infidelity, ‘Love will find you in the hardest of times’