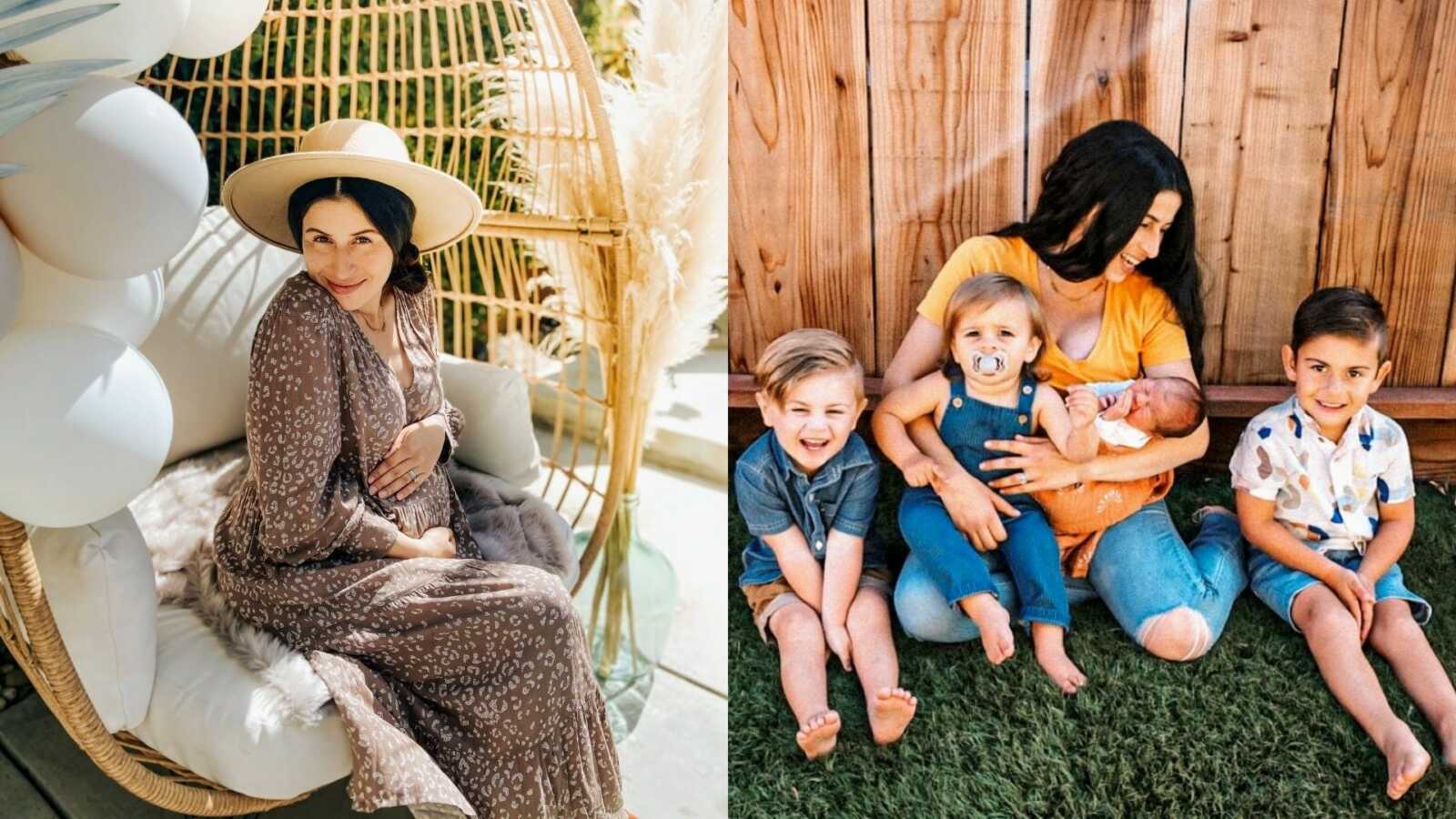 “In the fall of 2019, my husband and I were expecting our third baby boy in just over three years. While just imagining a life with three boys so close in age would be enough to send anyone into a state of fear complete with heart palpitations, we were over the moon. BUT at the same time, we agreed our family would be complete once he arrived, so we scheduled my husband’s vasectomy to take place a couple months after his due date.

Our third son’s big arrival came and went and shortly after my husband went in for his big procedure. We tended his wounds and carried on with our lives, counting down the months until our last baby was no longer a baby and we would never again be the parents of an infant…or so we thought.

A little over 9 months after my husband’s vasectomy, I went to visit my best friend out of state. While I was there, I began noticing something just felt off. And while I had not yet missed my period, I couldn’t shake the gut feeling I was pregnant. Before the weekend was through I told my friend of my suspicions to which she replied, ‘That’s impossible!’

Upon returning home from my trip I told my husband that while I know it sounded crazy, I thought I was pregnant. He too reminded me, ‘That’s impossible,’ but suggested I get a test to make me feel better. So the next morning, without warning him I was doing so, I tucked away into the bathroom and peed on the destiny stick. The + sign appeared almost instantly, as did the sick feeling in my stomach and the pounding in my chest.

I walked to the kitchen with the test in hand as if I was walking a plank. Once I turned the corner, my husband saw my face and asked, ‘What’s wrong?’ At this point I may or may not have been hyperventilating. It was after a few brief moments that he saw the test in my hand and stopped making our sons lunch. ‘Are you pregnant?’

And then came the tears. Mine, not his. As for the emotions that came next, I look back and laugh at them now. But at the time there was fear, resentment, anger, frustration, and even rage. I told myself we were done with this season of life. We were only weeks away from my son’s first birthday, the official end of the countdown I had going in my mind for when we would officially embark on the NEXT season.

As soon as the doctor’s office opened, we were on the phone, demanding to speak with the urologist, hoping for some guarantee we were in fact just being Punk’d. The doctor, on the other hand, was not amused at all and was even so confident as to say, ‘It’s probably just a chemical pregnancy.’

Five more positive tests and a semen analysis showed my husband’s active sperm count was back to ‘average’ and the reality of the situation had begun to sink in. His vasectomy had failed, and while there were only a couple hypothetical reasons this could have happened, none of them would change our current reality. We were having a fourth baby in less than five years.

Regardless of the hormones that were now surging through my body, I was feeling every negative emotion in the book: frustration, fear, resentment, paranoia, and flat out anger. I was DONE having kids. I was DONE being pregnant. I was ready for the next season of life. A season without babies.

As the first few weeks passed, I would pass my son’s bathroom and see three hooks on the wall. Every time I saw them I was sick to my stomach. They represented something more. There were three hooks. Not four. This was not my plan.

At 9 weeks, we did a blood draw for genetic testing. One of the pieces of information we got from this blood work was the baby’s gender. Even though everyone we knew was hoping for a girl, the thought filled me with more worry. A girl would mean more unknowns. More surprises. As if a fourth child wasn’t scary enough.

When the results finally came and we found out our fourth baby was a boy, something washed over me. A sense of peace. A sense of knowing. Suddenly, all the anger and resentment was gone. I don’t think I’ll ever be able to explain it, but it was as if in that moment I was overcome with calm, as if our son had reached out and said, ‘Hi mom. Everything is going to be okay.’ I could picture his face and I told my husband this was how it was meant to be. He was meant to be.

As the months passed, my pregnancy was extremely difficult and painful, but the anger didn’t come back. We couldn’t wait for our little boy to join us. Any time I had a doctor’s appointment, our older sons would ask, ‘Is the baby coming today?’ They we’re so excited to have another brother.

When the time finally came and he made his arrival, we couldn’t believe how perfect and peaceful he was. He joined our family and it was as if he had always been there. We named him Sonny and he is such a bright light in all of our lives. It has been a wild ride with four sons five and under but we wouldn’t have it any other way.”

This story was submitted to Love What Matters by Fort Barnes. Submit your own story and be sure to subscribe to our free email newsletter for our best stories, and our Youtube for our best videos.

‘THE BABY’S COMING OUT!’ My husband dies and comes back to life. I pull my pants down. He yells to pull them back up. Too late. Here’s baby’s head.’: Mom hilariously recounts giving birth in car

‘I got knocked up by the first guy I ever met from Tinder.’: Woman courageously places son for adoption after unexpected pregnancy

‘If this turns positive, it is freaking baby Jesus,’ I said to my husband as I finished peeing on a pregnancy test. He was holding our newborn baby girl we just brought home through adoption.’: Woman has unexpected pregnancy right after adoption

SHARE this story on Facebook to encourage others to cherish every moment and love what matters most!