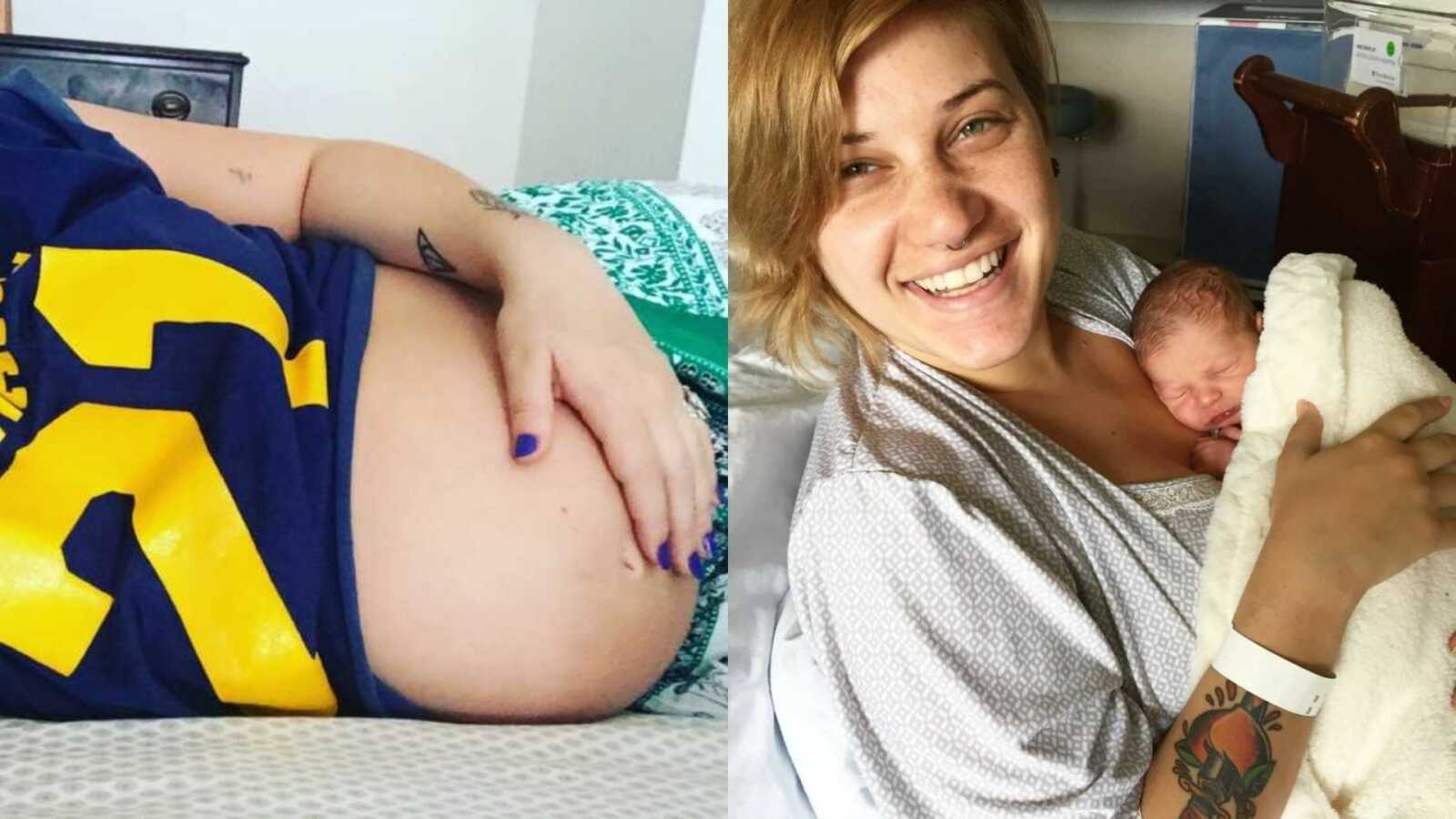 “‘My biggest fear is falling into the traps of normalcy,’ he said, stone serious.

‘Oh really? Because my biggest concern is raising a healthy human being.’

I’m sitting on my bed, in my teenage bedroom, at my mother’s house. It’s three days after I found out I got knocked up by the first guy I ever met from Tinder. I told him immediately, and his response was to go to the mountains and eat mushrooms about it. I didn’t mind that so much, but the realization he had, and was now trying to explain to me, made my blood burn in my veins.

‘I want to build us a van to live in. We can show our kid the world.’ I wish I remembered exactly what he said—I was rage-deaf by that point—but it was something like that. Show our kid the world was definitely in there. That was the moment I knew we weren’t going to raise this baby. I wanted an abortion and he agreed to help pay for it. It couldn’t be like it never happened, but this was a way out. We could move on with our lives. It would be fine.

My gyno told me by the time I took the at-home test I was already two months along. I didn’t want to have a baby, but something about that amount of time already having passed changed something in me. I decided against the abortion. It was a few weeks still before I decided on adoption, but the decision came quickly to me once the idea bloomed. I was adopted as an infant, and I learned when I finally met my birth mother at 18 that she was adopted at birth as well. She doesn’t know her birth family still. It feels like it’s in our blood in a weird way, this letting go. This trust. I knew I wasn’t ready to do it on my own. I also knew I could find a family who would love my child the way I was loved, it didn’t matter that we weren’t biological family.

I spent much of my second trimester wanting to die. I lived in a beautiful, two-room apartment in west Philly. It had exposed brick, built-in bookshelves in the bedroom, a bay window with a bench, and best of all, a deep bathtub. Even a pane of stained glass in the tiny window above the radiator. My loneliness was crippling, I didn’t know anyone in the city and I didn’t know how to meet people without drinking. I had struggled with depression before in life, but it was getting dark in a way I wasn’t familiar with. I started having thoughts taking off my seatbelt and driving my car into traffic, or into a tree. The only thing that kept me from it was the same reason I felt hopeless. I didn’t want to be pregnant. I felt petulant, angry. I was terrified of my body, of the small life inside of it. I didn’t want to love it. I didn’t love it. Until the doctor told me it was him. Then he was Wilder, and nothing else mattered.

The final month of my pregnancy is when I truly allowed myself to love him. I moved home from the city to my mother’s house, for comfort and to be around family. It’d been a long winter alone in that apartment, but I’d come through it. I’d pushed through. My son was growing strong and healthy in my belly. I started to feel a sense of worth and pride I’d never known before. I felt strong in some ways and incredibly tender in others. Expansive.

He came a week early, 39 hours of labor, and only 1 pushing. The only thing I remember clearly is opening my eyes to look down when the doctor told me to ease up, and seeing my son half-entered the world, half-still part of me. My head fell back, I bore down, and he was born. He was quiet, and the room was silent. I could feel their worry, the nurses, my mother, my best friend, but I wasn’t worried. I knew he was fine. When he did start to make noises, they weren’t cries, more like a chirping. High and sweet, a little like a song.

I wish I could say I’m steadfast in my decision, that I never have any regrets about it. Sometimes I do. It’s been over a year and a half since he left my body and sometimes I still feel him, fluttering in my center.  There are days when I can’t get out of bed, when missing him is like drowning but not ever truly blacking out. Just pressure and the loudest silence. There are also—more often now—days when I’m reminded constantly why I made the choice I made.

Wilder is going to be two years old in June. A little over a week ago I went to visit with them for the second time in their home with my boyfriend.

‘I’m afraid to see him because I’m afraid I won’t know him.’ I was sobbing into Tim’s shoulder the week before the visit.

His arms were around me, ‘It’s okay baby. It’s going to be okay.’

I think what I didn’t realize until I did see Wilder was that my fear was not at all about not knowing him—it was about him not knowing me. Not knowing how that would feel. Knowing that we will never know each other as mother and child even though I am his mother, and he my son. What I am continually realizing during this process is that that is okay. It’s all going to be okay. He has a mother and father and older sister, and he also has me. ‘Two mothers,’ his sister says with a smile.

I gave them to him and him to them and it’s the most important thing I’ve ever done, ever will do, because in the end it wasn’t about me or my ego. When I need strength on those darker days, I remind myself of that. I’m learning daily that it’s about perspective. Without this ritual I’m afraid I’d lose my mind with want. This is a lesson in feeling all ways at once, but most of all, the depth of power a mother’s love wields, regardless of blood.

He came a week early

long for this world,

longing for this world.

He came through me & I

I don’t know why yet.

He will spend his life

exploring that & I will have

the magic of witnessing it

of knowing I labored for it:

every single day since.”

This story was submitted to Love What Matters by Kaitlyn Buhrman, 27, of Kennett Square, Pennsylvania. Do you have a similar experience? We’d love to hear your journey. Submit your own story here, and subscribe to our best stories in our free newsletter here.

‘IT’S A BOY!,’ they said as they held him up over the sheet. She turned and looked at me. ‘That’s your baby.’ It was the most incredible moment of my life.’

‘Eli and his biological brother who went to another family have lived 45 minutes from each other for their entire lives, and have never met. Until now.’