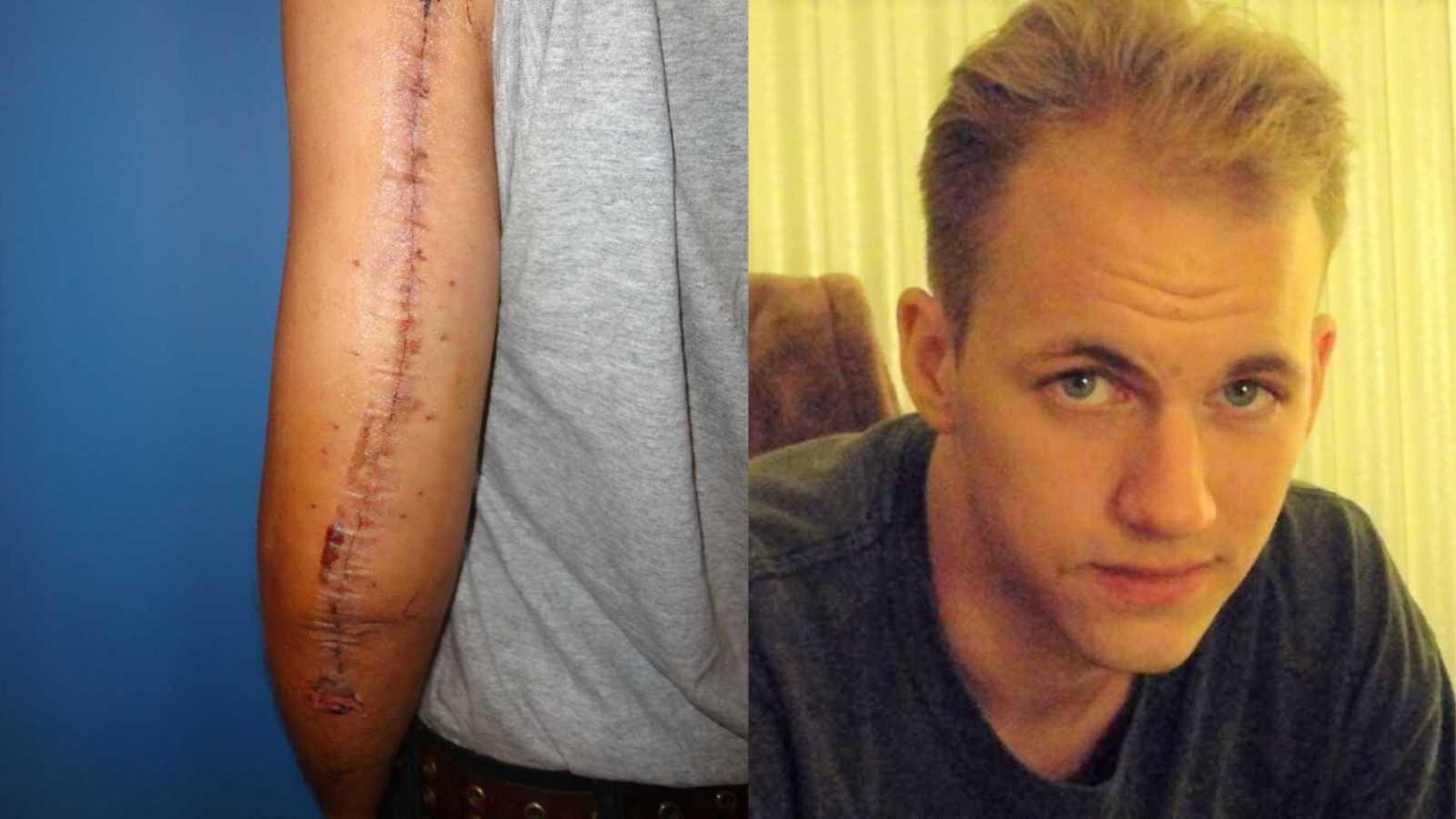 “‘God, be with my son!’ was all I could manage as I ran out the door to my car. I had just gotten ‘the phone call.’ The call no parent ever wants to get. ‘Get to the emergency room! Now!’ was all my husband blurted out. So I flew out the door, not knowing what happened, how bad it was, or even if my son was alive.

My 21-year-old son, Josh, had moved out the year before, had a job he worked hard at, was enrolled in college, and was starting to find his way in life. He had always wanted a motorcycle since he was little, and one day, mentioned in a conversation he was going to buy one. My husband (a former motorcycle owner) and I advised against it: ‘You can do everything right,’ we said to him, ‘But all it takes is for someone else to do something wrong and you’ll wind up in trouble.’ He went ahead and bought it anyway and was really excited about doing so. It was a nice bike and I was happy for him, all the while still obviously very concerned for his safety.

He used the bike through the spring, summer, and into the fall, driving to and from work or classes, and going for rides with fellow bikers. Everything was good. Until that night when I got the call.

We found out later that Josh had been on his way home from work when a car approaching from the opposite direction made a turn right in front of him. It happened so fast. He had nowhere to go but into the side of her. He was thrown from the motorcycle and lay crumpled on the side of the road. A few passing motorists stopped, called first responders, offered aid, and blocked off the road so Josh wouldn’t unintentionally get run over by other unaware motorists. Thank God for those people!

My unconscious son was airlifted to the hospital while my husband and I rushed there from our separate locations. As I frantically drove to the hospital, so many thoughts raced through my mind. I tried to remain calm and keep my wits about me. But the unknowing was getting to me. I tried to prepare myself for when I saw him–he would probably be connected to wires and not be looking too great. ‘But wait, is he even alive?’ I didn’t know. ‘What are the extents of his injuries?’ How bad WOULD he look when I finally saw him? I felt nauseous.

I arrived at the hospital first and paced and paced as I anxiously waited to be able to see Josh. My husband arrived shortly after, and soon we were ushered into the ER. What a sight. There were wires, tubes, a neck brace. Josh’s face was bloodied from breaking the car window with it, both arms looked contorted, and he had gashes on his leg. He was messed up, but he was alive. God had spared his life!

He was in and out of consciousness. When the doctors were able to question him, he could remember his first name but not his middle or last. He didn’t know where he was or what had happened. Josh was quite frustrated by this. Also, he said things that were out of character for him, and other things that didn’t make sense at all. And he spoke in a voice that wasn’t even his. That really freaked me out. I thought, ‘Well, God spared him, but who is he?’

After CT scans, x-rays, and evaluations from various doctors, it was determined he had broken his left arm in eight places. He also broke his right wrist, had a fractured hip, a concussion, and needed stitches on his nose and chin. Thankfully, he had been wearing his motorcycle helmet and leather jacket, which definitely protected him from the damage being any worse.

Josh’s hospital stay was just beginning, and that first night was the longest night of my life. Sitting there, seeing my son laying in that bed, broken, in so much pain, incoherent, with an unknown future ahead was apparently a bit much for this mom to handle. Before I knew what was taking place, I started hyperventilating. I couldn’t move my arms or legs. Talk about panic! It came out of nowhere and I tried to make it stop, but I couldn’t. What was going on? My husband got a wheelchair from a nurse and wheeled me out to the lobby for some ‘fresh air.’ It took a whole 45 minutes for my breathing to return to somewhat normal and to be able to move my extremities again. The nurse said it was probably a panic attack. I hadn’t realized how much the seriousness of Josh’s condition had gotten to me.

Once I was back bedside, Josh complained about something sharp in his mouth. Since he couldn’t use his arms, I fetched the object out. It was glass, most likely from the car’s broken window. I thought I had it all, but then the next day there was more. I kept taking small pieces of glass out of his mouth. This would go on for three days.

That first night in the ER dragged on as we waited for any updates from doctors, and hoped to see some progress from Josh. Close friends from church came to offer support and pray with us. Then slowly, as the hours passed, Josh’s mental state improved and he was regaining his personality. ‘He’s coming back! My son is returning to us!’

The doctors informed us that Josh needed surgery on his left arm, but that it, and the casting of his right wrist, couldn’t happen until the swelling went down. That could be days. Well, it turned out to be eight days. He was in pain. A lot of pain. The surgery took six hours as they pieced his bone back together with plates and screws. The post-op was pretty tough and painful, but the surgery was a success. Casting his wrist was easy in comparison.

He still couldn’t use his left arm and had to figure out how to use his casted right arm to eat and such. After he had recovered enough from the surgery, physical therapists got him up out of bed for the first time in over a week to sit in a chair. He almost passed out. Little by little, day by day, they worked with him. Taking some steps. Working up to walking a slow lap around the hospital floor. Attempting some stairs. Josh was completely wiped out after each session.

All totaled, Josh spent 16 long days and nights in the hospital. We were all so glad and relieved when he was finally discharged. He still had a long recovery ahead of him, but recover he would! He moved back with us for a couple of months so he could get stronger, more mobile, and be driven to doctor appointments and physical therapy sessions. He got more use from his arms, especially after the cast came off. His hip was still sore for a while and he walked slowly, but the prognosis was that it and both arms would fully heal in time. Josh, unfortunately, had to drop out of school–but only for one semester. He felt well enough to get back at it the following spring.

As we approached Josh’s birthday that year (a day I wasn’t sure we’d be celebrating), I was filled with much gratefulness to God. He not only spared my son, but He placed him on the road towards a full recovery. Instead of the traditional birthday cake, Josh requested a birthday pie. Yep, that sounds like my son! It’s a blessing to have him back. A special birthday PIE is what he got, and celebrate is what we did.”

This story was submitted to Love What Matters by Dawn Kay of Queens, NY. Do you have a similar experience? We’d like to hear your important journey. Submit your own story here. Be sure to subscribe to our free email newsletter for our best stories, and YouTube for our best videos.

‘Karen didn’t make it.’ My heart dropped. The day I planned to kill myself, I lost my friend to a motorcycle wreck.’: Man battling suicide vows to ‘keep going’ after friend’s unexpected death

‘They’re calling rain today.’ My husband starts his motorcycle. ‘I love you. I’ll be fine!’ He walks out for the last time.’: Woman’s husband ‘paralyzed from the armpit down,’ learns to appreciate ‘the beautiful moments’

Do you know someone who could benefit from this story? SHARE on Facebook with family and friends. 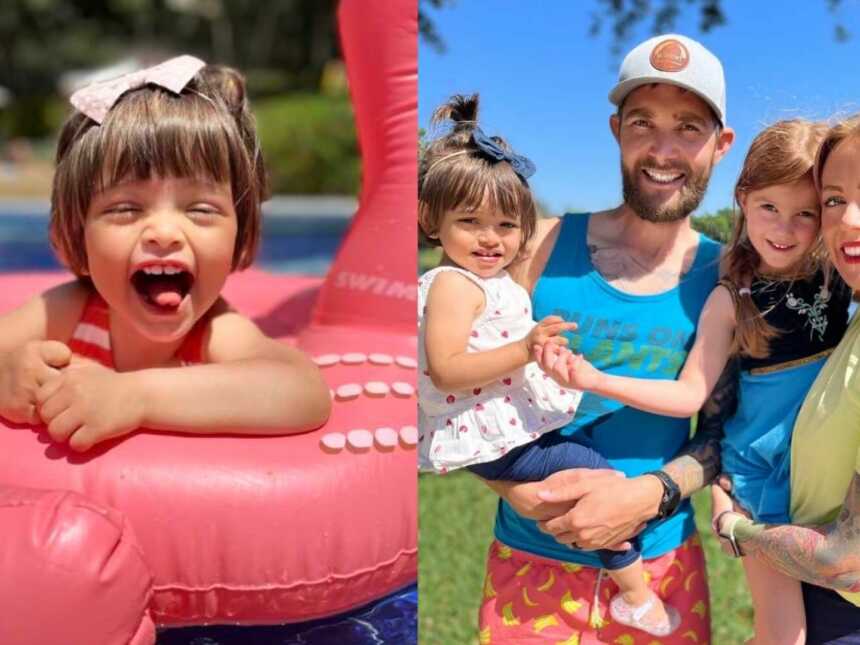