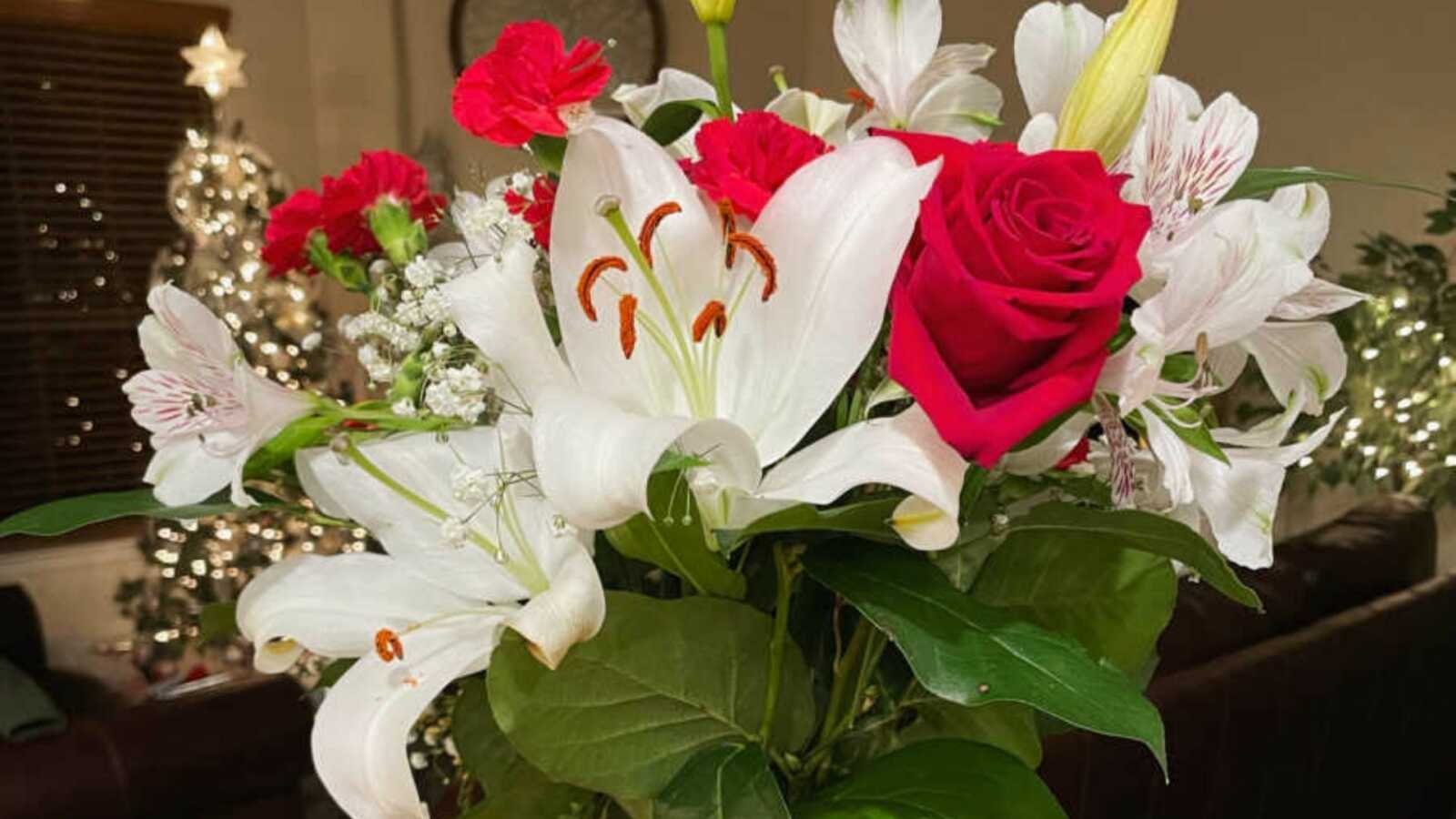 “I can’t tell you how many flowers I’ve been given in the past year. ⁣

It all started last Christmas. On December 12, 2020, my sister’s long battle with cancer finally reached its end.

She was finally at rest, but those of us left behind were devastated.

I remember the week between Rachel’s death and funeral as the absolute worst week of my life.

All the arrangements intermixed beautifully with the Christmas decor.

My home looked and smelled amazing that week.

It was a sweet, small victory during that terrible time.

This four-footed guy wasn’t our blood relative, but after 12 years in our home, it sure felt like it.

The veterinarian confirmed our fears,

So we made the difficult decision to end his suffering.

But then, we suffered.

And as we grieved, more flowers came.

That my broken heart would still be lifted up in thoughts and prayers.

Another month passed, and I welcomed my baby boy.

‘We don’t know what’s wrong with him,’ was all the NICU doctor could say.

The devastation and shock cut through us like a knife.

We weren’t the only ones that were shocked.

I know, because once again flowers flooded our home.

And though I felt so alone, I was once again reminded that I wasn’t forgotten.

So at this point, thousands of dollars have probably been spent to comfort me. ⁣

But to me, it’s thousands of dollars so well-spent. ⁣

Each and every arrangement is precious to me.

It’s a needed reminder that someone is thinking about me, and praying for me. ⁣

That my sadness isn’t forgotten. ⁣

‘I wish I could do more,’ friends have said, knowing full well there was nothing more they could do.

Well, nothing more than sending these gorgeous lilies.

Nothing more than giving me a physical reminder of their thoughts and prayers. ⁣

Reminding me they were praying for me when I was too weak to. ⁣

Recently marked the first anniversary of my sister’s passing.

I dreaded the day and prayed that God would give me the strength to get through it.

That prayer was answered, in the form of florals.

A full 365 days later, my grief still mattered to those who love me.

I pray that none of my loved ones ever have to live through a year as I had.

But I do know that whenever tragedy strikes their lives, you better believe I’ll have a florist on speed-dial.

So they’ll know I’ll be praying for them, and thinking of them.

I won’t allow their sadness to be forgotten either. ”

This story was submitted to Love What Matters by Katy Dodds. You can follow her journey on Facebook and Instagram. Submit your own story here, and be sure to subscribe to our free email newsletter for our best stories, and YouTube for our best videos.

‘Just 10 months after our divorce was finalized, AJ took his own life.’: Divorced widow navigates grief with rare identity

‘The Mr. in my Mr. and Mrs. wasn’t there at the wedding. And today it hit me hard. Six stupid years later.’: Widow shares brave moment of grief