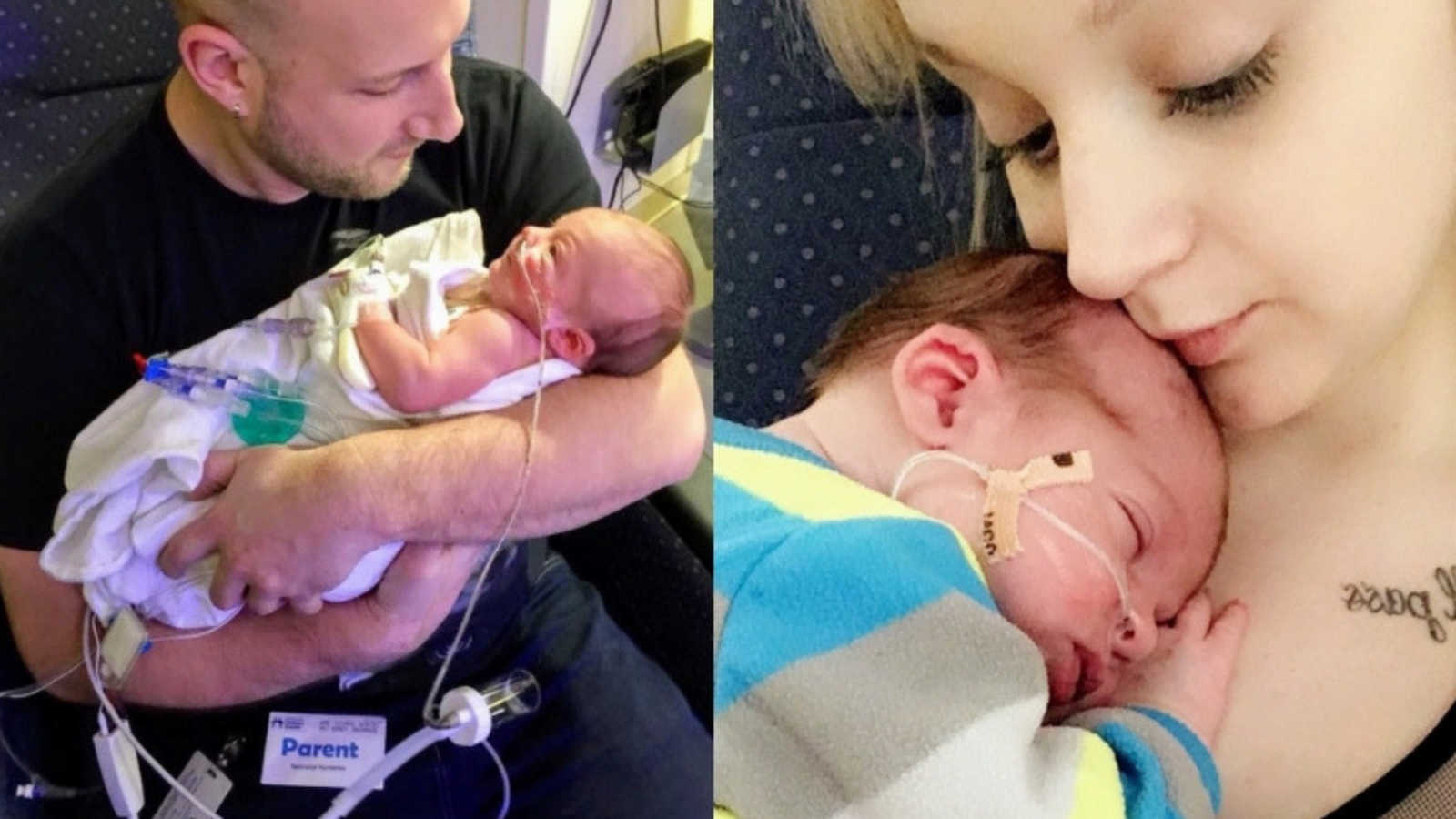 “You’ve most likely heard someone say, ‘nothing will prepare you for motherhood.’ Of course, that is true. There are things that I’m not denying will help, like parenting classes and books. However, there are some parts that are much too raw. Nothing will emotionally prepare you for that moment you first lay eyes on your baby, or lay eyes on yourself when you get that first glimpse of your body in the mirror. Yikes! Nothing will prepare you for the postpartum hormones, how to react to parenting advice you never asked for, sleep deprivation, or even the abundance of anxiety you suddenly have about everything. Furthermore, there is definitely no mental preparation available for when it’s 48 hours into your child’s existence, and your precious baby who was doing so perfectly… is suddenly not.

Your innocent, beautiful baby that you just carried for 9 months, dreaming and craving to know who they will be. This baby that you finally held in your arms for 2 days, nourished from your body, celebrated, wept over, and fell in absolute awe of, is now being taken away from you, to a Children’s hospital. And you? Now you’re headed up there in a different vehicle, not knowing.

A little back story: The second day of Charlie’s life, he became a lot less interested in feeding. He started to vomit a green color and was still without his first bowel movement. Nurse after nurse continued to say everything was ‘normal’. Even this green bile? ‘Yeah that’s normal.’ (Why did they all insist on using that word?) As his parents, we knew something was off. We were scared, and it was just not being validated by anyone. For quite some time. We would call another nurse into the room and she would tell us through the speaker that it’s normal. And to make sure to keep feeding him even though he keeps getting sick, because that’s the best thing for him. Also, that we could find more linen two hallways down if he was spitting up on everything. (I JUST gave birth and had to waddle around the ward looking for clean things while Charlie was getting sick. When I walked back, about 5 nurses were watching Grey’s Anatomy at the desk. Thanks). Finally, though, after quite a few shift changes, there was a nurse who was extremely attentive, and said ,’I don’t like what I’m seeing, I’m going to call a pediatrician’. She got the ball rolling, and quickly. Fast forward a little, and the doctor (who is Charlie’s doctor to this day) is sending him to a Children’s Hospital about an hour away. They rolled him away from us to the special care nursery. When we were ‘allowed’ to see him before he was transferred he was attached to so many wires, and part of the front of his head was shaved. They explained calmly, ‘His head was shaved because we were trying to get an IV into his scalp, but we couldn’t.’ I was distraught. They deal with this on a daily basis, but that was my world laying there, so vulnerable and pure.

When we arrived, he was to be in the NICU. It was obvious right away that we were in an amazing place; the best possible hospital for Charlie. The NICU journey was an emotional rollercoaster (Insert no sleep and the hormones following child birth here). I am unbelievably lucky to have the partner I do, as well as the family we both do. It was only two weeks, but I promise you it felt like a whole century. Poor babe had a rough go in the beginning, constantly being poked and prodded from tests and those IV’s (yep, more head shaving) to nose tubes that he enjoyed pulling out and needed to be put back in through his nostril, down his throat. That sucked. We definitely missed out on some serious cuddles, too. Being away from his incubator at any point, whether it was trying to sleep at night or scarfing down a meal, was sickening. Sometimes I’d have breakdowns, whether it was right in front of his bed, or a random one in the parking lot. Thankfully, Charlie won’t remember any of that. He was in an outstanding hospital, getting all fixed up. Perhaps he was just wondering why the hell he had to exit the womb for all this. He had it just fine floating in there! 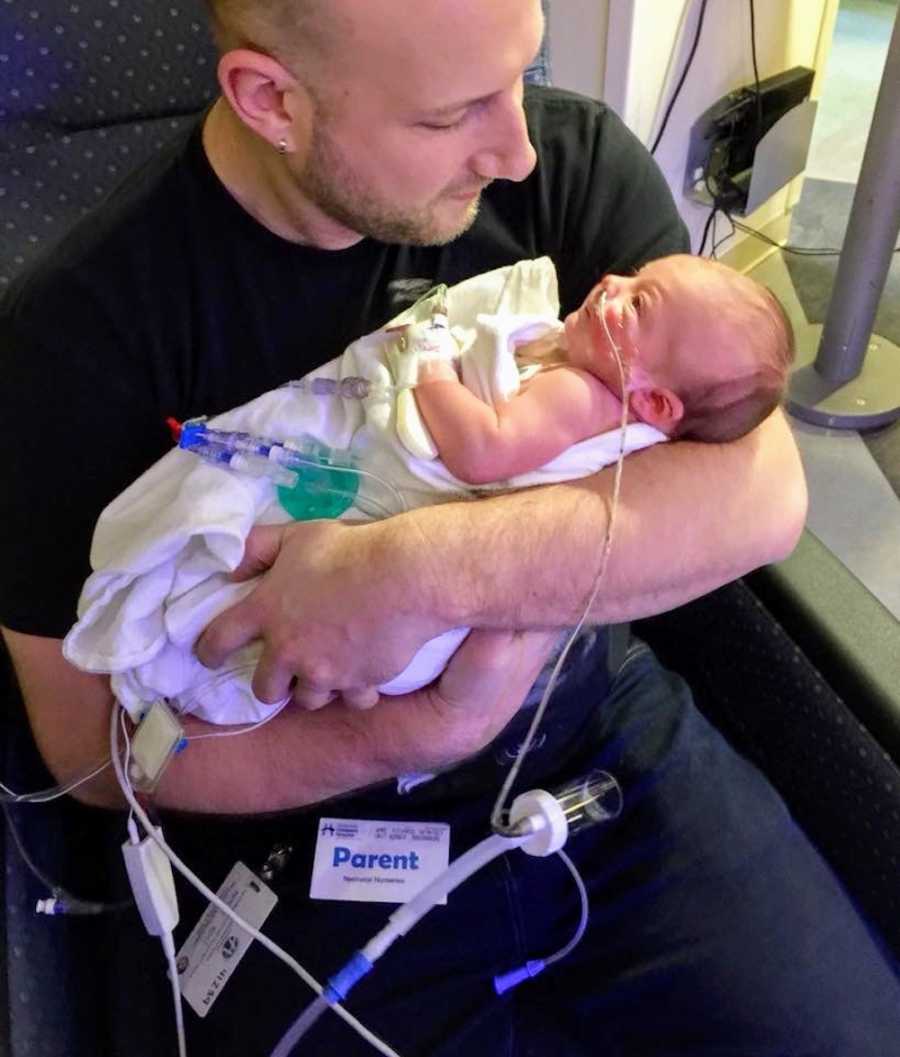 Fast forward a little, and we’ll make an extremely long story short. We ended up finding out that our sweet boy has Hirschsprung Disease. His large intestine was missing nerve cells, (ganglion cells) and because of this, he was unable to go ‘number two’ if you will. (Coincidentally, I’ve always despised every word for that act, i.e. ‘poo.’ It has now become our life).

Hirschsprung Disease is 1 in every 5000 babies (frequently male). There is no ‘cure’ for this congenital disease, nor will we ever know the exact reasoning as to why Charlie, or any baby thus far, is born with it. I’ve racked my brain thousands of times before. Was it something I ate? Something I said…?

Before we were allowed to take Charlie home, we had to be trained by medical staff how to perform a ‘rectal irrigation’. Without being too graphic, a rectal irrigation includes inserting sixteen inches worth of a rubber catheter into his rectum, filling it with saline solution, and having his bowel movements come back through the catheter. This was what we performed every 6 hours in order for Charlie to be alive and healthy. Side-note: it didn’t seem to bother him, and he enjoyed spraying daddy with the only weapon he had available at the time. Needless to say, it was a mess! Between this, and myself being hooked up to a breast pump every 2 hours, you can imagine that we didn’t get out much.

This was what life consisted of until our brave boy was 2 months old, and had a major, four-hour surgery, ‘The Pull Through’. It was performed by a remarkable surgeon (who essentially invented said procedure) alongside his team. Charlie had 6 inches of his large intestine removed. We were over the moon that very night post-op when he began going!

With only a couple bumps in the road since then, Charlie is currently 6 months old and doing great.

This condition will be something that has an effect on Charlie’s life. With a special diet, an active lifestyle, the amazing medical team that Charlie follows up with which includes the very man that saved his life, as well as the skills that we as parents have acquired here on out, I have all the faith in the world regarding his future. Of course, there is an abundance of details and stories that aren’t included in this blog, as it’s a complicated condition.

Charlie is quite the little spitfire. For a baby his age, he has quite the range of emotions. He goes from grunting at you when he just doesn’t feel like making eye contact, to completely ecstatic babbling and laughing. He loves hearing ‘In the Jungle’, specifically the ‘a-weema -way’ part, trees, butternut squash and peanut butter, his jolly jumper, swimming pools, baths, ecstatic screaming (I mean screaming, he’s got pipes) and of course his favorite show, ‘Little Baby Bum’.

He has blue eyes, a bald spot on the back of his noggin, long feet and toes, Hirschsprung Disease, the cutest little chunky leg rolls, and the best smile my heart has ever known. Not one of these sole factors define him, although one has admittedly been shittier than the others. Literally and figuratively.

It’s so wonderful to watch our Charlie boy progress every day. We are at the point in his journey where we are treating him like we would any baby, (although I’m sure I’d give him more kisses). If and when we hit another bump in the road, I know that our little warrior has got this. (His dad never slows down for speed bumps anyway. Perhaps it was a metaphor all along).”

This story was submitted to Love What Matters by Melissa Richards, 24, of Ontario, Canada. Submit your own story here, and subscribe to our best stories in our free newsletter here.