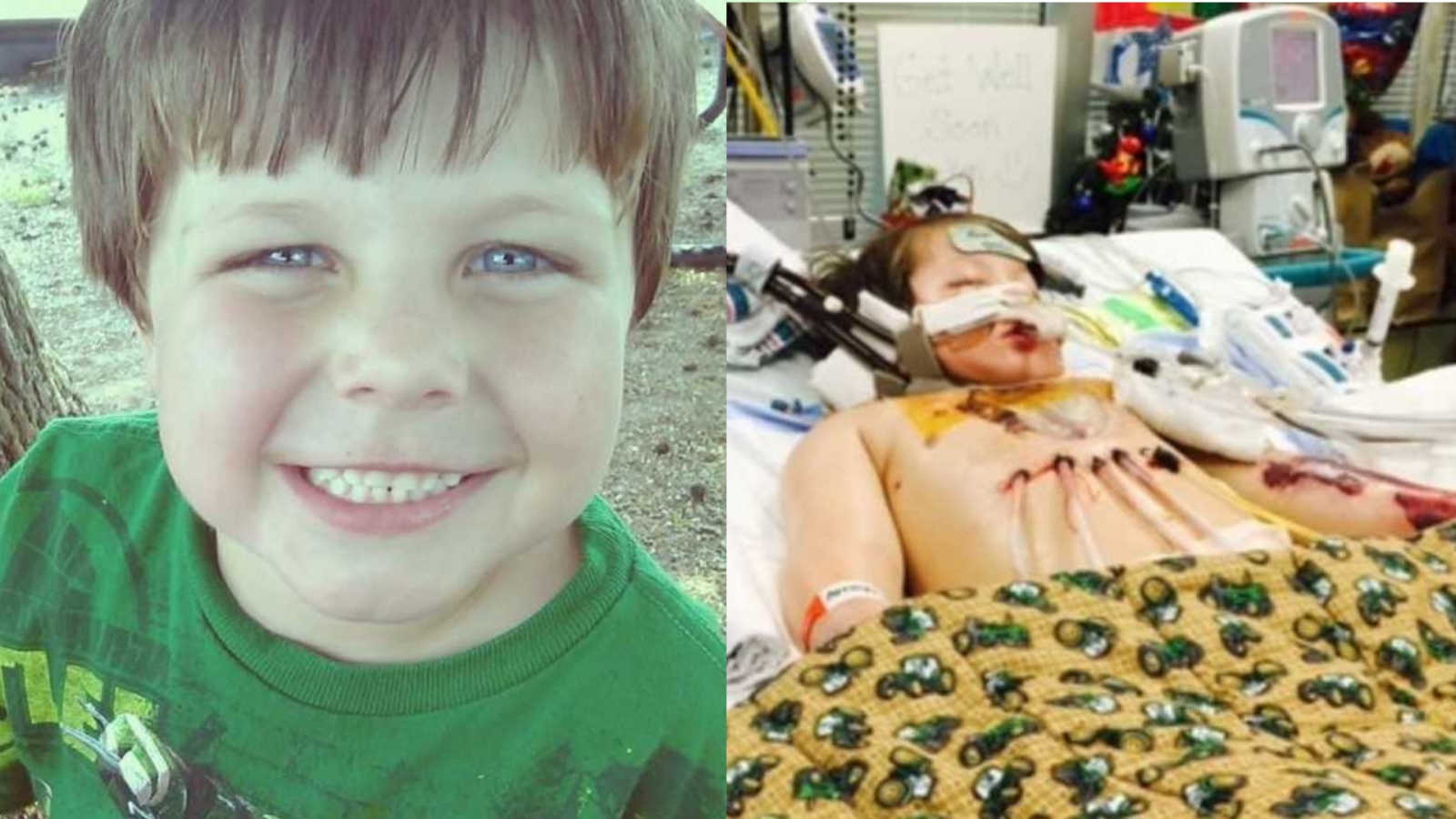 “On Thursday, Kierken (who was 4 at the time) woke up with what we thought was croup, which he has had before. We made him a doctor appointment that morning, they gave him a steroid and sent us on our way. By around 4 p.m. Kierken was still coughing really badly and crying about his head hurting. We planned on heading back to the doctor, but he fell asleep and I decided to take a quick shower before we left. About 10 minutes later, my husband started yelling that Kierken wasn’t breathing right. His lungs had collapsed! We called an ambulance and they took him to the closest hospital while we waited for Arkansas Children’s Hospital (ACH) to come pick him up. When ACH got there, we were admitted directly into the PICU where Kierken was intubated. My husband and I were oblivious to the days that were about to come — some of the hardest of our lives.

On Friday we thought he was doing well. We still just thought he had a really bad case of croup and that we may be there for only a week or so. By that evening they drew blood and found out his white blood cell count was extremely low. Kierken was fighting a much stronger infection than we thought. Around 8 p.m. that evening, Kierken’s blood pressure started dropping. Kevin and I sat there watching them try every single thing they could to bring it up, then he coded… twice! We couldn’t believe our eyes. We were in shock.

They were giving Kierken CPR and doses of epinephrine every 2 minutes to keep his heart beating. I honestly don’t know how long this was going on; it felt like forever. The doctor told us they were going to hook him up to a machine called ECMO. (The best way I can describe it is like a heart and lung bypass machine). The surgeons arrived and they finally got him hooked up. He was so bruised and swollen, his heart didn’t beat for the next 4 days, but he was stable thanks to the ECMO machine.

On Saturday morning we were informed they found out what Kierken’s infection was: he had Group A Strep, and it was in his bloodstream. Kierken was very sick and his chances of survival were low, but we never gave up hope. As Saturday went on, it got worse. The ECMO machine wasn’t giving him the support he needed. The doctor came to us and told us they had to open his chest and connect the ECMO directly to his heart. A very risky surgery — they gave him a 5% chance to make it through the surgery. But we were told he wouldn’t survive the next 3 hours without it. By the grace of God and the wonderful team working on Kierken, he did amazing and the surgery was a success! Afterward, we were told they had never tried this surgery on someone with his infection before; he was the first.

Kierken ended up being on ECMO for 74 days. His chest was open most of that time. He went through many more complications and contracted two more infections during his PICU stay. He did many ECMO trial offs which were unsuccessful because he couldn’t control his CO2. After so long, his veins/artery that the ECMO was connected to got very weak. Because of this, his chest cavity filled up with a lot of blood and they had to go clean it out several times. He had to come off ECMO and it had to be soon.

After a lot of research, the doctors, ECMO team and surgeons came up with a plan. They were going to try something that’s never been done before. They took off the ECMO machine and just connected the membrane (the part the helps control his CO2) to the vein/artery in his inner thigh with grafts, and instead of the ECMO acting like a pump, his heart would be the pump (Kind of like an artificial lung). By doing this, they were finally able to close his chest. After about 2 weeks, Kierken was able to control his CO2 himself and was able to come off the membrane. It was a success! Thank God!

He was still intubated, and we needed to start waking him up. Kierken had been sedated and on such high doses of pain medication for such a long time, they had no idea what kind of damage there would be from everything he went through. There was talk about Kierken possibly needing a trach because of the damage to his lungs from all the trauma. On Easter (April 5, 2015) they extubated him to see if he would be successful without one. He was able to oxygenate himself but was wearing himself out doing so. His lungs were still too weak.

He was on high flow oxygen for about a month before it was decided a trach was needed so he could still be on a ventilator to help recondition his lungs. He received a trach and a Mickey button (feeding tube) at the end of April. Him getting a trach was the best decision we could’ve ever made for him. Within a week or so you could already tell he was getting more energy and was able to wake up more.

We stayed in the PICU about 2 to 3 more weeks and then we were moved to rehab. Not only did Kierken have to wean off of all his medication, he had to learn how to sit up, stand, walk, eat, and drink again. Our total stay at ACH was 7 and-a-half months. We got to go home July 28th, 2015!

I’m happy to report that Kierken has had a beyond amazing recovery, but he is now scheduled in  for a surgery to cut apart his vocal cords. We found out in December that they had grown together while he was on the ventilator. His voice has been a whisper since he got sick and this surgery should give him his voice back. He’s very excited!

I honestly can say that what we went through with Kierken has saved me: my love for life, having a grateful heart, and learning to enjoy the little things more. I learned to find thanks in every day, in every situation. Bad or good, there’s always something to rejoice for. We got the absolute greatest outcome in Kierken’s situation. He is a living breathing miracle in every way, and I can’t wait to see what’s in store for his future. The things they were able to do at the hospital for the first time because of Kierken will save others’ lives, his story gives hope, I couldn’t ask for more. We also want to always pay it forward. We were shown so much kindness and love, we had the most amazing amount of support. I want to be a light in someone else’s darkness like people were for me.

My warning to other parents is to research and understand more about sepsis. It is more common than people realize. Kierken’s happened from strep… strep is a common illness with kids and people don’t understand what it can do if not caught, and strep is just one of the common illnesses it could start from. I honestly had no idea. Septic shock is a very real thing and takes more lives than you know. If you feel like something isn’t right, speak up, push for tests, take control, and be more aware. It could save your child’s life. Nobody thinks it’ll happen to them, but it can, and unfortunately it does.”

This story was submitted to Love What Matters by Amanda McNeely of Arkansas. Submit your story here, and be sure to subscribe to our best love stories here.

‘She said, ‘Would you rather not be here, or have your daughter eat formula if necessary? She needs mama here.’: Mom’s near-death experience with sepsis

Please SHARE this article with your friends and family to raise awareness about Group A streptococcal bacteria!