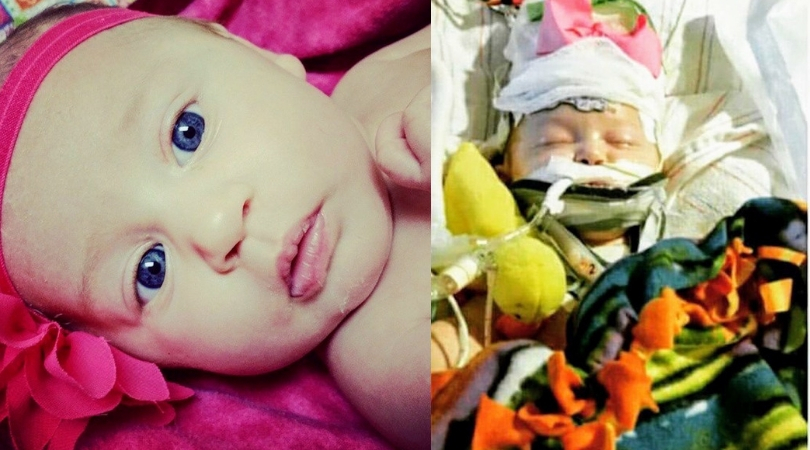 My husband and I had been separated and had gone through a lot of ups and downs, but we were back together, and I finally felt like we might make it.

I didn’t know how wrong I was.

On March 11, my daughter Emmalynn wasn’t acting like her usual self. She was sleeping a lot and she had what I thought was a seizure. We took her to the hospital and after a few minutes with the doctor, they almost sent us home. Until her heart rate dropped. The doctor rushed her to have an MRI and I can still remember the panic I felt when the tech said, ‘Oh crap’. I remember looking at him and asking what was wrong. He wasn’t allowed to tell us. From the MRI they rushed us to trauma where everyone was rushing around trying to get her ready to be flown to PCH. She had multiple brain bleeds. I called my mom and grandma and asked them to come. I knew something was very wrong by the way the doctor and nurses were acting.

The police came, and I couldn’t understand what was going on. Why were they there?

They interviewed us and all I wanted was to be with my daughter. They wouldn’t let me fly with her and looking back I now know it’s because they didn’t know who had hurt her.

I barely remember the drive there. I was running on a few hours of sleep for the last 3 days as I was the only one working at the time and I worked night shift. I remember thinking someone must have hurt her and suspecting my husband, but I didn’t want to believe it. I asked him over and over if he’d hurt her in any way and he just kept saying no.

When we got to the hospital, my baby looked so little and fragile in her hospital bed. There were so many tubes and wires hooked up for the pain meds, seizure meds and EEG machine.

The days in the hospital blur together. On March 13 my husband was arrested. I was told he confessed to shaking her violently multiple times. Those days I had to spend with him were some of the worst days of my life. I knew I hadn’t hurt her, and he was the one who had been with her while I was working. I remember feeling so angry and just wanting him to be hurt as badly as my baby was. The police came, and I felt so relieved because I could finally tell them what I thought, and I wanted him away from me and away from my daughter.

She spent 9 days in a coma, having seizures. She was intubated. She had to have spinal surgery for a spinal hematoma that was the length of her spine. She had multiple brain bleeds and areas of her brain didn’t get oxygen for some time. She had a broken ankle. She had retinal bleeding. They told me she would be blind. That she wouldn’t walk or talk or be able to do anything on her own. The palliative care people came in and told me she would most likely spend her life in a rehab center.

My baby was assaulted. At 11 weeks old my daughter was almost murdered.

Those days she was intubated, I couldn’t hold her and that’s all I wanted to do. So, when they finally let me, I didn’t want to put her down. I remember her looking at me and I just knew they had to be wrong. There was no way she was blind. She held my fingers tightly and when she took her pacifier for the first time my mom and I cried with the nurse.

They said that she was blind.

They said that she wouldn’t walk.

They said she wouldn’t talk.

They said she wouldn’t do anything normal.

But she has met most of her milestones.

She’s a miracle and the only reason she is alive and doing so well is because of God. I always knew he was big, but I didn’t know how big until he saved her.

My now ex-husband took a plea deal for 10 to 15 years and he got 13. It’s not enough for what he did but it’s a little bit of justice for Emma.

Never shake a baby. Call for help or walk away. It’s never okay to hurt a child.”

This story was submitted to Love What Matters by Brittany Trznadel. Submit your own story here, and subscribe to our best stories in our free newsletter here.