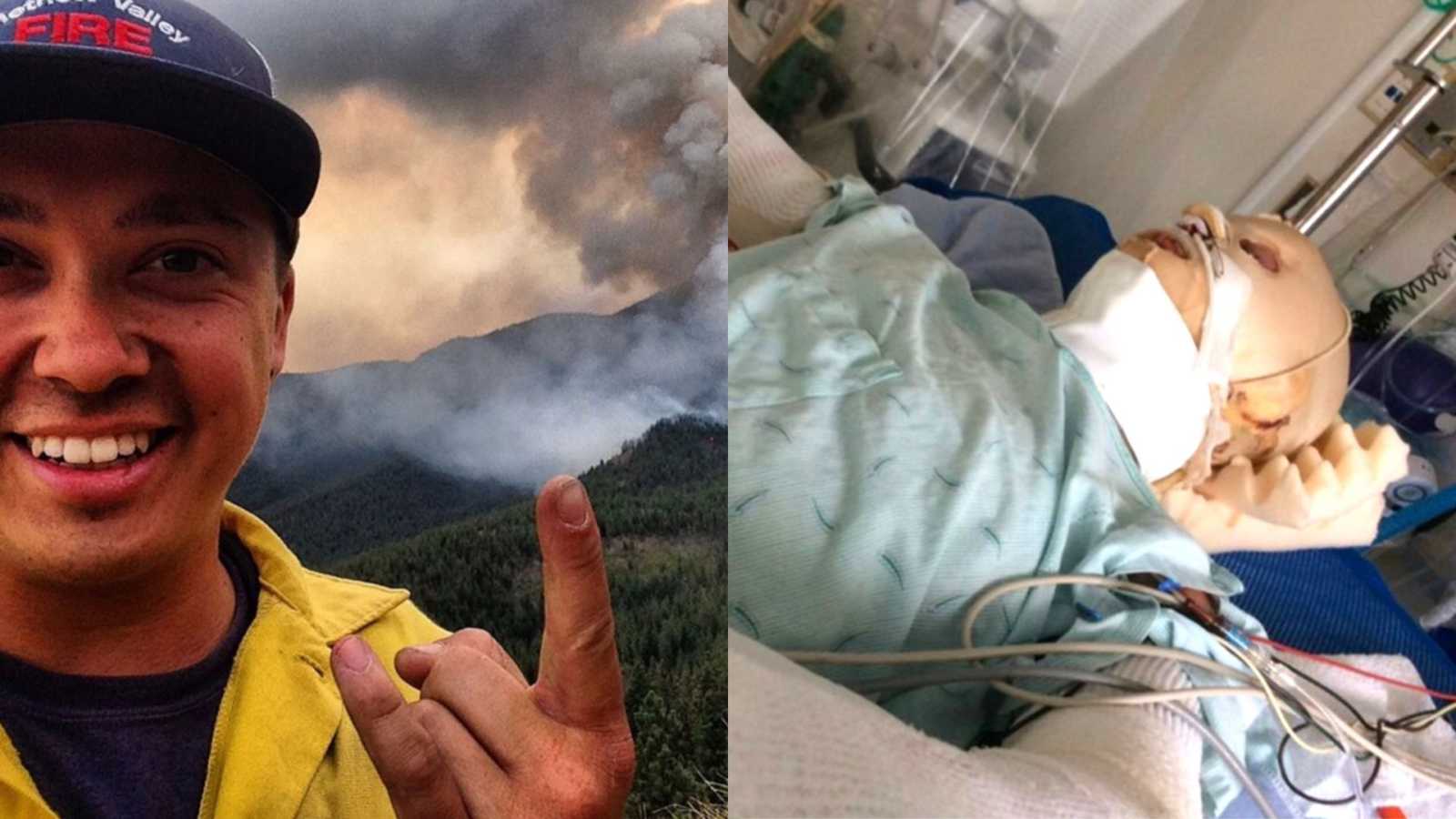 “My name is Daniel Lyon and I want to share my story with you of how I became forged by fire. In my early twenties, I graduated from the University of Washington. During my time in college is when I gained a passion for serving my community. I wanted to make a real difference and started a path towards law enforcement. Fresh out of college I was picked up by a local police department as a reserve officer. A reserve officer is essentially a volunteer officer fully commissioned but does not receive any pay. It’s a great steppingstone into a full-time career. I really enjoyed my time in the police academy and then working as an officer. But since this was a non-paid position, I needed to still make money. So, I applied to be a wildland firefighter for the U.S. Forest Service and was picked up rather quickly. I finally felt like I was living the dream. I would typically work the weekdays as a firefighter and then as a police officer on the weekend. It was the best of both worlds and for someone like me who loved a fast-paced life, it was perfect.

Sadly, all of that soon came crashing down. On August 19, I was working my shift as a firefighter. My crew and I got dispatched to the report of a fire right outside of a small town called Twisp in Washington state. This fire would later become known as the Twisp River Fire. There was four of us working to provide structure protection to some houses that were at risk. Suddenly the wind drastically increased causing the fire to explode into an inferno and it came straight towards us. The four of us jumped into the fire engine to get out of the area. The driver had no choice but to drive back down the dead-end road that was now overtaken by fire in order to get to our safety zone.

The flames caused an intense amount of heat and smoke to the point we could barely see the road at all. The visibility was so bad the driver accidentally veered the fire engine off the roadway, and we crashed into a steep ravine. The fire engine came to an abrupt stop and was immediately engulfed in flames as well as everything around us. I immediately knew I would either have to run through the fire and get burned alive but possibly still live or die right there in the truck. I chose to run. I crawled up out of the ravine and ran as fast as I could all while being burned alive and screaming for help not only for myself but my buddies as well. I simply remember screaming to other firefighters ‘We have guys entrapped!’ while pointing to where I came from and covered in flames. Believe it or not, in the moment of being on fire I don’t remember feeling pain. It’s amazing how your body reacts to life threatening situations. It’s like the adrenaline takes over and you don’t even think of the pain. Eventually I broke out of the fire but sadly my buddies never made it.

I woke up about a month later in a burn center in Seattle, Washington. I remember looking at myself thinking I looked like a mummy bandaged from head to toe. It didn’t freak me out until the first day I saw my face in a mirror with no bandages. I was overwhelmed with crushing sadness. All of my fingertips had been amputated and I had already undergone several surgeries. I had thought the hard part was over, but little did I know, it was only the beginning. I would still need tons of grafting and dozens of surgeries and not to mention countless hours of rehabilitative therapy. I began hating life. The pain of burns is truly indescribable. It’s misery. I never wanted to actually kill myself but there were several times I thought ‘If I can just pass away in my sleep it won’t be the worst thing.’ Adding to that pain was the constant nagging of the doctors and nurses for me to walk and move. I originally hated it but quickly realized they were only looking out for my best interest. I ended up creating true friendships with several of the nurses. They were my motivators and encouraged me to always be better. They’d say ‘life will get better. We promise we will still be friends with you even after you leave this hospital.’ I can happily say this has held true to this day.

There came a point where I finally got moved to the rehab floor of the hospital. It was the beginning of my third month at the burn center. This floor was where everyone who had a traumatic injury went before being released. There was every kind of patient imaginable from brain injuries, burns and gunshot wounds. At the end of a very long haul was a gym where a therapist would help us work out each day. My room was positioned in what seemed like a very long ways away from the gym. Each day a therapist would come and wake me up and make me walk to the other end of the hall to where the gym was. To walk was excruciatingly painful and took all my energy. I begged for a wheelchair, but they always said I needed to walk. I’d constantly say, ‘Please, please just wheel me there. Walking is miserable!’ After a couple of times of making this trek I noticed everyone’s room had a wheelchair outside of it except for mine. I began to get angry that everyone else could use a wheelchair except for me. After a week or so I finally snapped at the nurse. I raised my voice and said ‘I want a wheelchair right now. It’s extremely unfair that everyone else can have a wheelchair except for me!’ Looking back at that statement, it was probably the most selfish thing I have ever said during my stay there. The nurse turned to me and calmly said, ‘Daniel, you have to understand that the only reason these people have wheelchairs is because they may never walk again. A lot of them are paralyzed. But you can still walk. Even though you are burned, and walking is painful, you can still do it. You still have your legs. You are lucky.’ That statement changed me. It didn’t just change my outlook on being burned, it changed my life. At that point I realized what was limiting me most was my mindset.

From that day on I have made sure to never take any day for granted and to feel blessed for everything I have. Fast forward to today, just a little over 4 years later and I’m happy, healthy, and living a great life. I can walk again, I can run again, and last month I even submitted Mount Ranier in honor of my brothers who passed away. I won’t lie and tell you life is perfect. I still have my rough days. The injuries aren’t just physical, they’re mental. Sometimes the mental pain of losing my buddies is worse than my physical injuries.

On social media there have been a few people who have said some rude things about my appearance. Those are just the keyboard warriors I have to ignore. In the real world I can honestly say 99.9% of people have treated me with respect. I’ve definitely had people ask what happened to me. Some may feel uncomfortable with this, but I actually appreciate it. We live in a society where we train our minds to look away from people with disabilities rather than get to know them. As long as someone asks in a respectful way, I’m happy to share my story. It shows they are taking a genuine interest in me.

Here is my advice to everyone. Never, ever, EVER give up. When people tell you, you ‘can’t do it’, use that as motivation to prove them wrong. Believe it or not, when people tell me ‘you can’t’, I actually enjoy it. It fuels the fire inside me that tells me I have the ability to do anything. I encourage all of you to find a way to think the same way and turn negative energy into something positive. As far as my future dreams, I still plan on going back to be a police officer. A lot of people have asked me why I’d go back to such a dangerous job and I always have the same answer. ‘It’s always been my dream to be a policeman and serve my community. Even though life threw me a curveball, my dreams have never changed. I’ve realized that I may be burned, but I am not broken. I am forged by fire.'”

This story was submitted to Love What Matters by Daniel Lyon. You can follow his journey on Instagram and Facebook. Do you have a similar experience? We’d like to hear your important journey. Submit your own story here. Be sure to subscribe to our free email newsletter for our best stories, and YouTube for our best videos.

‘He’d hit me in his sleep, blackout while driving on the highway and scream. ‘If you don’t get help, I’ll take our baby and leave.’: Woman’s husband suffers from PTSD, traumatic brain injury post-military, ‘never gives up’ on their love