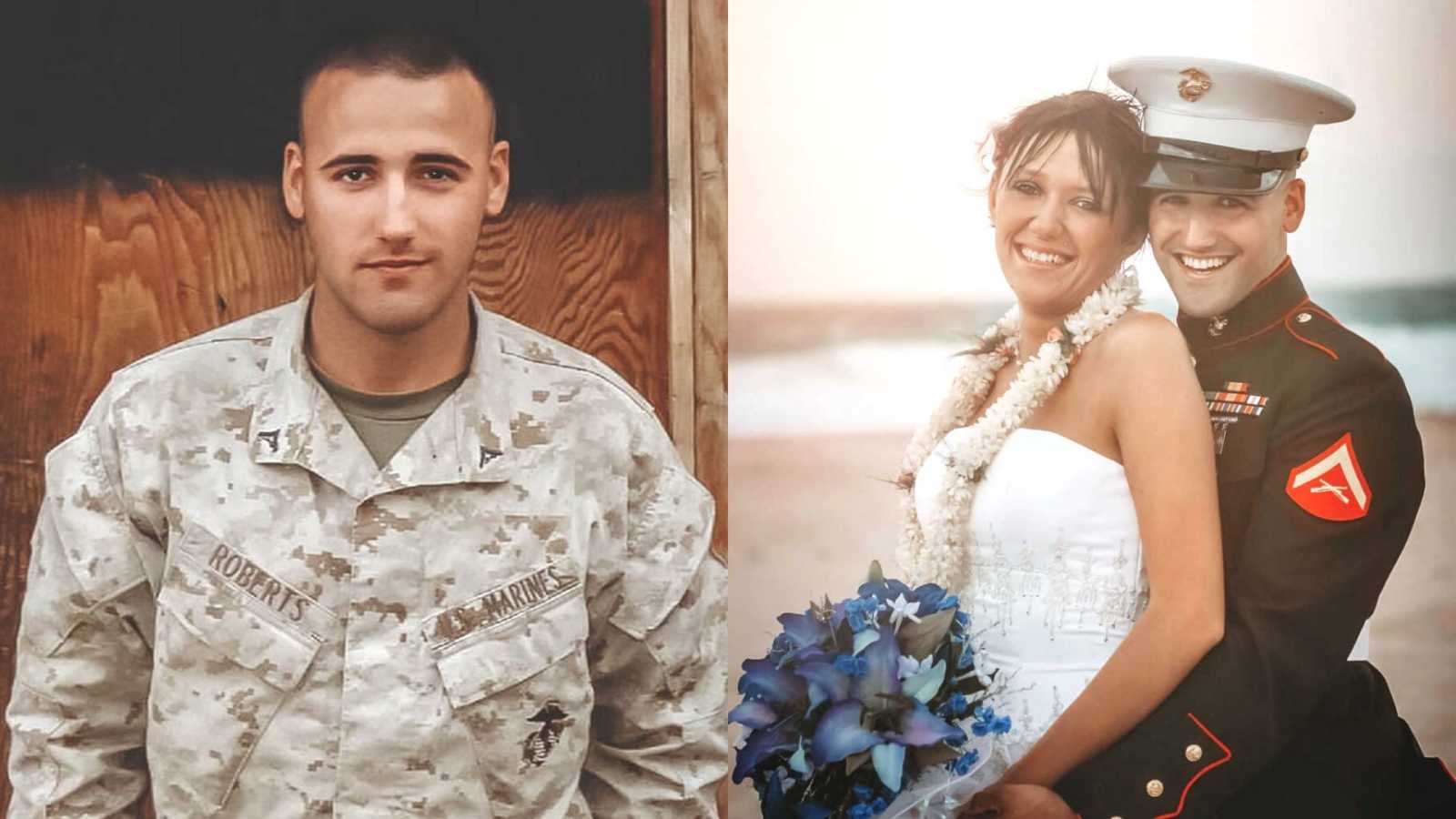 “I met my husband on good old Myspace back in December of 2006. I thought I knew him, but I didn’t. He was a marine stationed in Hawaii. I had just gotten out of the Army. We had grown up down the street from each other but never met. We fell in love instantly through messaging and phone calls. He asked me to come meet him before he deployed to Iraq in March 2007. I was terrified because, what if he were a creepy old man? I laughingly agreed because he jokingly said worst case scenario, it was a free trip to Hawaii.

That whole plane ride I felt like my heart was going to beat out of my chest. It was terrifying and wonderful. I wrote him a note telling him how scared and excited I was. This was back when everything was still done by hand. When I saw him at the airport, it was instant love at first sight. I knew we were going to be together forever. Three days later, we were engaged. It was the best 10 days of my life.

When it came time for me to return to Ohio, I felt so sick. He would be deploying and I was so scared. I actually bought him an engagement ring which is out of the ordinary, but I wanted him to know he had a reason to come home. We wrote each other love letters every single week. Mail seemed to take forever but I cherished every word I heard from him.

I remember we were set to get married in December. Halfway through his deployment his cousin, who he was more like brothers with, was killed in action. He was supposed to escort his body home but from where he was in Iraq he couldn’t get to him, so he came and met everyone home on emergency leave for the funeral. My husband David was destroyed and distraught. I no longer wanted to marry him in December, I wanted to marry him as soon as he got back from Iraq in October. To do more of an elopement rather than a big family wedding in Ohio. Understandably, our families were upset. Plane tickets were expensive and we both have large families. His grandmother grabbed me and said, ‘You marry that boy. You don’t worry about anything anyone else has to say. They will get over it. Make him happy.’ This was the beginning of the example she and her husband would set for me. We married days after he got home with a few of our family members able to make the wedding.

We have been married now for 11 years. We have had so many struggles. More deployments to Iraq left him with severe post-traumatic stress, a traumatic brain injury, depression, anxiety, and many more problems. We wanted a family but had fertility issues. We tried to go through the fertility clinic but he kept deploying or going to train every time we would start a cycle. Finally, I begged him to switch jobs, out of the infantry so we could just start a family. He agreed that the deployments were starting to wear him down. We moved to San Diego, California, after his weather training. It was there that his symptoms of PTSD began to show.

We didn’t realize what was happening at first. I thought he was just angry and stressed out. Then nightmares started to happen. He would hit me in his sleep. I would have to wear makeup to cover the bruises on my cheek. One of the scariest times was after I finally was able to give birth to a beautiful son. He blacked out while driving us down the highway and started to scream. I told him that if he didn’t get help I would take our baby and leave. The doctor’s theory was that when you’re in the infantry you are constantly training and constantly deploying. When he slowed down to a ‘desk’ job, his brain would wander and he would start to have flashbacks. After more testing they realized he also had suffered a TBI (traumatic brain injury) on one of the deployments. Because he had never lost consciousness they didn’t catch it when it had happened. He had problems with short term memory on top of the post-traumatic stress. Eventually we were transferred to the Wounded Warrior Battalion and he was medically retired. We were able to have a second child (a girl) before he was processed out which we were so grateful for.

To this day my husband struggles with depression over not completing his full 20 years and beating everyday struggles (short term memory problems) trying to get a mechanical engineering degree, and fit in as a civilian. He is trying to find his place in the world and misses the Marine Corps. It fulfilled him in a way that so far nothing else can. What they don’t tell you about being the wife of someone with PTSD and a TBI is that it’s like losing the person you fell in love with, and not being able to mourn. That person is gone. The mistake I made so much in the beginning was trying to force him to be who he was instead of just loving who he is. I’ve mourned the loss of who he was now. I’m grateful he came home when so many didn’t. He is changed. He hardly ever smiles and he’s just a different person now. Once in a while I’ll see a peek of the old him come out for a split second, but overall we take it by day and try and find joy in the small things.

Our children have been our biggest blessing. We bought a house in Ohio out in the country to be close to our families. The VA assigned me as his caregiver, something I would do as his wife anyway. The title frustrated him to no end and we had to go to marriage counseling to help. There is a fine line between mothering and wife and I hate it sometimes as it can be hard to find. I make sure he doesn’t forget to take his medications, gets to all of his appointments, and he doesn’t drive very often as his has problems with it. I’m not going to lie, our life has been complicated, but if I could go back and do all over again I’d do it. I chose him, and I’d choose him again. I love him with all of my heart and despite it all it has been worth every second.

I use photography as a creative outlet for my stress and it helps me cope through some of the hard times. My husband’s grandparents have been such an incredible example to us. They have been married for 68 years. Whenever we are struggling his grandma will pull me aside and talk to me and give me some worldly advice. How to smile, laugh, not hold on to anger. She gave me Troll Doll dangly earrings one time and told me not to ever take things too seriously. I laughed so hard and asked my husband how sexy did he find me in them? I figured if we could just keep laughing, keep those silly moments going, we’d be okay.

After her 90th birthday, I realized I should do a photo shoot capturing she and her husband’s love for each other and look at them as a reminder to always remember why my husband and I fell in love, to not give up, and that it is possible to keep going. I begged my husband’s grandparents to let me do photos of them. His grandma smiled at me gently and said she would do anything to make me happy. All she wanted in return was for me to make her grandson happy.

It was the most beautiful fall day we could have asked for. We laughed at so many things, including me trying to get grandpa to smile by telling her in his most sultry voice his favorite fast food restaurant. He whispered at her…’I like my McDonalds Hamburger…’ They did amazing! I will forever cherish these photos and everything that they stand for, including the example they have set for us.”

This story was submitted to Love What Matters by Michelle Roberts, 33, of Ohio. Submit your own story here, and subscribe to our best stories in our free newsletter here.

‘Tex? Somebody’s looking for Tex!’ My dad immediately raced to the door. Nobody ever called him that. Except for ONE person.’ Military dad surprised with war buddy after 58 years

‘I adopted a deployed soldier. I knew he’d be my husband. People thought we were nuts.’: 10 months after ‘random selection’ pairing online, couple says ‘I do’ after emotional military homecoming

Show your love for the military heroes around the world. SHARE this story on Facebook with friends and family.