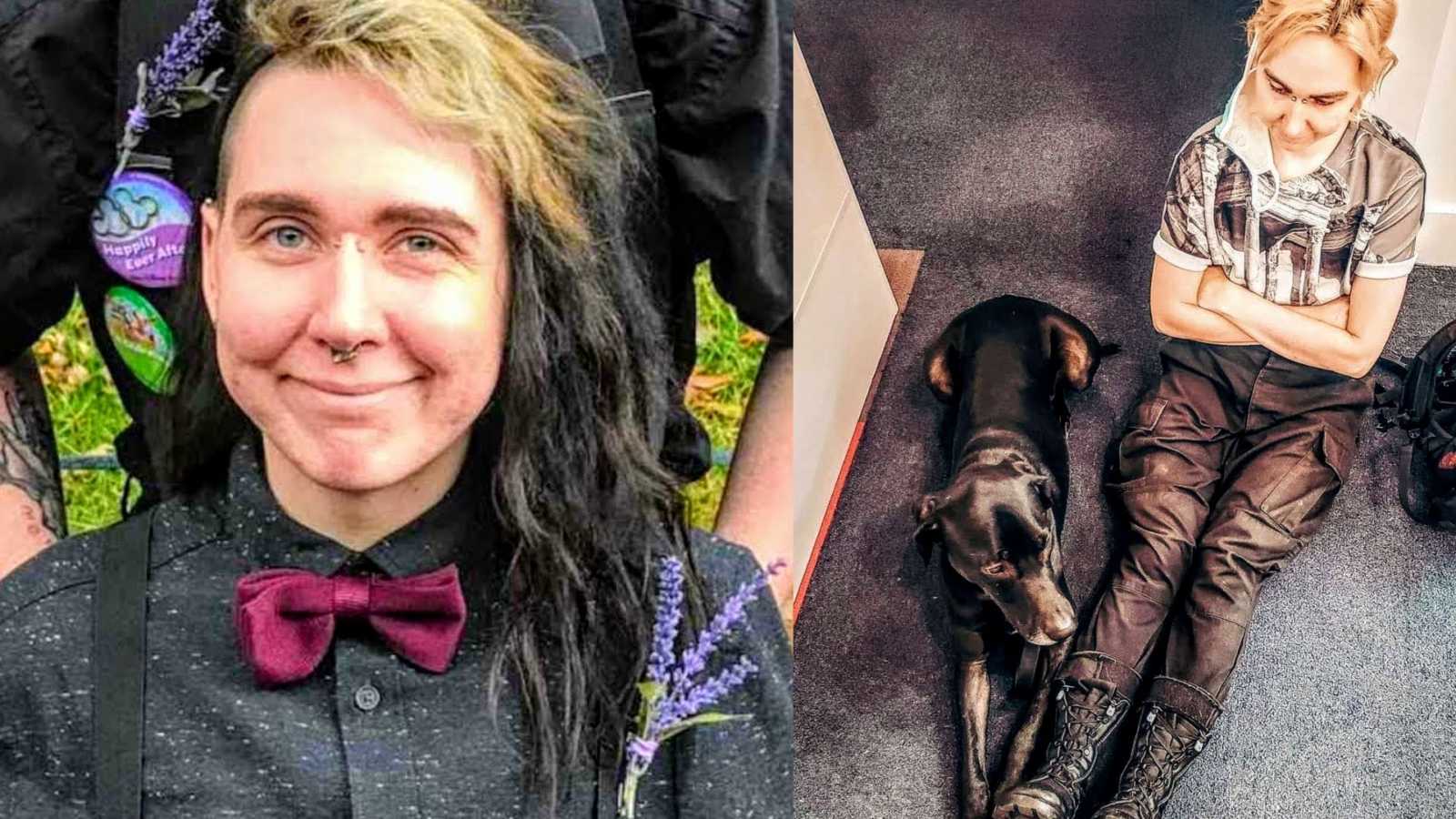 “When I was a little kid, I went to a book store where an actress portraying Miss Spider was hired to do a meet and greet. I don’t know if I was old enough to discern actor portrayals of characters from fantasy, but I know I was definitely young enough and unregulated enough that I didn’t have a handle on expressing myself appropriately.

I screamed. I cried. Several adults soothed and consoled me, including Miss Spider! They were all sure I was mortified by the sight of a giant spider whose legs sprawled for what may as well have been miles. They were 100% correct. Because at some point in the fuss, I gurgled through the snot and tears that Miss Spider was just so wonderful.

Meanwhile, I was a towheaded, gawky, fish-eyed ugly duckling. Over time, I blossomed into a goose with alopecia and facial asymmetry. I also grew in eager, crowded teeth in a tiny mouth. My hands and my feet are the envy of the Black Lagoon Creature’s fins. My face is as radiant as the full moon: shimmering, with acne craters on a spherical surface. I may not be the bee’s knees, but I sure do have knock knees!

The instinct of most people I care about who I share this knowledge with is to react in the same way as those adults who tried to soothe the younger version of me. I’ll hear words of assurance, promises everything will be okay, or even disputes that what things seem to be simply aren’t true. The only substitution is instead of telling me Miss Spider is just a beautiful human woman disguised beneath the veneer of prosthetics and makeup, they’re telling me I’m a beautiful person.

Before these kind-intentioned lavishes were gifted to me as a mid-spectrum millennial adult, I spent a lifetime absorbing negative affirmations toward my physical appearance and personality.

The first of these observations came from my peers and were very superficial. These were just your garden variety of, ‘We don’t want to play with you, because you’re ugly, a freak, weird, etc.’ Sometimes they evolved to ‘stupid’ when my peers would take my speech impediments into account.

These validations matured with my peers. I was (and still am) very emotionally and physically sensitive. I wear anguish like a statement piece. I used to cry about everything. My peers had a morbid fascination with intentionally injuring me to provoke my ugliest and most prolonged crying.

Once my first round of puberty hit, things took a dark turn; this was the mile marker of when adults felt invited to share their opinions of my body and my attitude. The base presumption from pediatricians was to skip the inquiries as to whether I was sexually active and provide educational safety advice. The consensus among my peers was I was ‘undateable’ and even ‘unrapeable’ (which provided the perfect alibi for the individuals who felt motivated to try the latter).

Some of the greatest hits of things said to me by friends/friends-of-friends, grown adults, previous partners and young children include:

‘I just can’t look at them. I’m sorry, I know they’re your friend, but they’re so ugly.’

‘Their hands are like deflated balloons. I can’t believe I let them touch me!’

‘Did they decide to transition because they were such an ugly girl?’

‘Oh, they’re transitioning in that direction? I mean, it’s hard to tell because they’re so…’

And so on and so on.

Here’s the thing: I’m ugly. I’m incredibly ugly. Emphasis on the incredible. And I’m very proud of it.

Don’t get me wrong—for the first half of my life, I definitely internalized these abuses in a self-deprecating way. I felt I understood why they hated me and I logically felt like I should hate myself, too. This meant my own eventual coming out as a queer person was slow and nervous and filled with tears and trauma, much like my initial encounter with Miss Spider. And it was just so wonderful.

I won’t insinuate all ugly kids grow up to be fabulously queer (even though Lou Reed’s ‘Smalltown’ provides compelling evidence: ‘When you’re growing up in a small town / Bad skin, bad eyes, gay and fatty / People look at you funny / When you’re in a small town’). Nor will I stand here and tell you the LGBTQ+ community is immune to the racism, the lookism, the ableism, the ageism, or the misogyny that we’ve unfortunately carried in with us from our upbringings, because that’s simply untrue. But I will tell you about how I am one of the young people who grew up to find pride in ugliness, both in a general sense and in my own personal ugliness.

I had two major breakthroughs happen at approximately the same time. Let me set the scene.

I was a tween/teen in the mid 2000’s. It was the age of Disney princesses! The rom-coms! The interchangeable couples amounting to 10 years’ worth of scriptable content for FRIENDS! These were all things my peers enjoyed and I desperately wanted to enjoy, too, but I just didn’t.

What I did enjoy was the debut season of a Bravo show about five fabulously flamboyant men who blustered through bachelor pads with the tenacity of a twister. It was everything.

Through OG Queer Eye, I began to open doors to all kinds of funhouse mirrors of monstrosity. I saw a construction paper cutout of Carson Kressley reveal himself to be a crab person on South Park in the same fell swoop as I saw John Hurt as the Elephant Man, Joseph Merrick, give his impassioned plea: ‘I am not an animal! I am a human being!’

In college, I began to dissect queer-coding through the academic lens of queer theory and aesthetics. I learned the vocabulary of Oscar Wilde’s sardonic wit. I also felt sincere validation in Edmund Burke’s treatise on the difference between what could be categorized as ‘sublime’ vs. what could be categorized as ‘beautiful’: the two poles that encompassed the whole of human feeling. According to Burke, beauty is what we like to have near us, because it is aesthetically pleasing. Beauty can be observed anywhere and everywhere.

When I wasn’t waxing on the philosophical and cultural relevance of aesthetics, I indulged myself in the drama of it. I binge-watched RuPaul’s Drag Race and fell in love with out-of-the-box personalities like TaMMie Brown, Sharon Needles, and Alaska. When I left campus housing, it was to go to my other home: Pulse Orlando. When I had to find a new home, it was Stonewall Orlando, and it just happened to be on a fateful Tuesday night (yes, THAT night), which I no longer write about.

Creature Feature Tuesdays is the first place where I have ever been approached by my peers (greeted with an enthusiastic ‘Hello, ugly!’ which is a term of endearment in monster-centered spaces) and told I looked amazing. It’s the first place where I have felt the warmth of people who genuinely meant that. It is, to date, the only place where no one, patron nor performer, has ever interrogated me about my physical differences or disabilities. Although many of my maladies and co-morbidities prevent me from stepping out, these days, I am often contacted by regulars and told I am missed and loved. Stonewall Orlando is where I learned my sublime confidence.

Agender is, plainly put, the absence of gender that falls under the transgender umbrella. My transition is a form of masculinization that’s typical of female-to-male transitions (hrt, surgeries, etc.), but my relationship to my gender (or lack of it) comes from feeling alienated by the expectations of what it means to be A Woman and also A Man.

It may have taken nearly 3 decades, but I have learned to re-tool every slur, every utterance of slander, and every hurtful observation pierced into me and relish the power of it.”

This story was submitted to Love What Matters by Ariel L. You can follow Ariel on Instagram. Submit your own story here and be sure to subscribe to our free email newsletter for our best stories.

Read more inspiring stories about those coming to terms with themselves and their sexualities here:

‘I came out during my valedictorian speech. For years, I kept my secret hidden until it ate away at my conscience. I cut everyone off, paranoid they’d notice.’