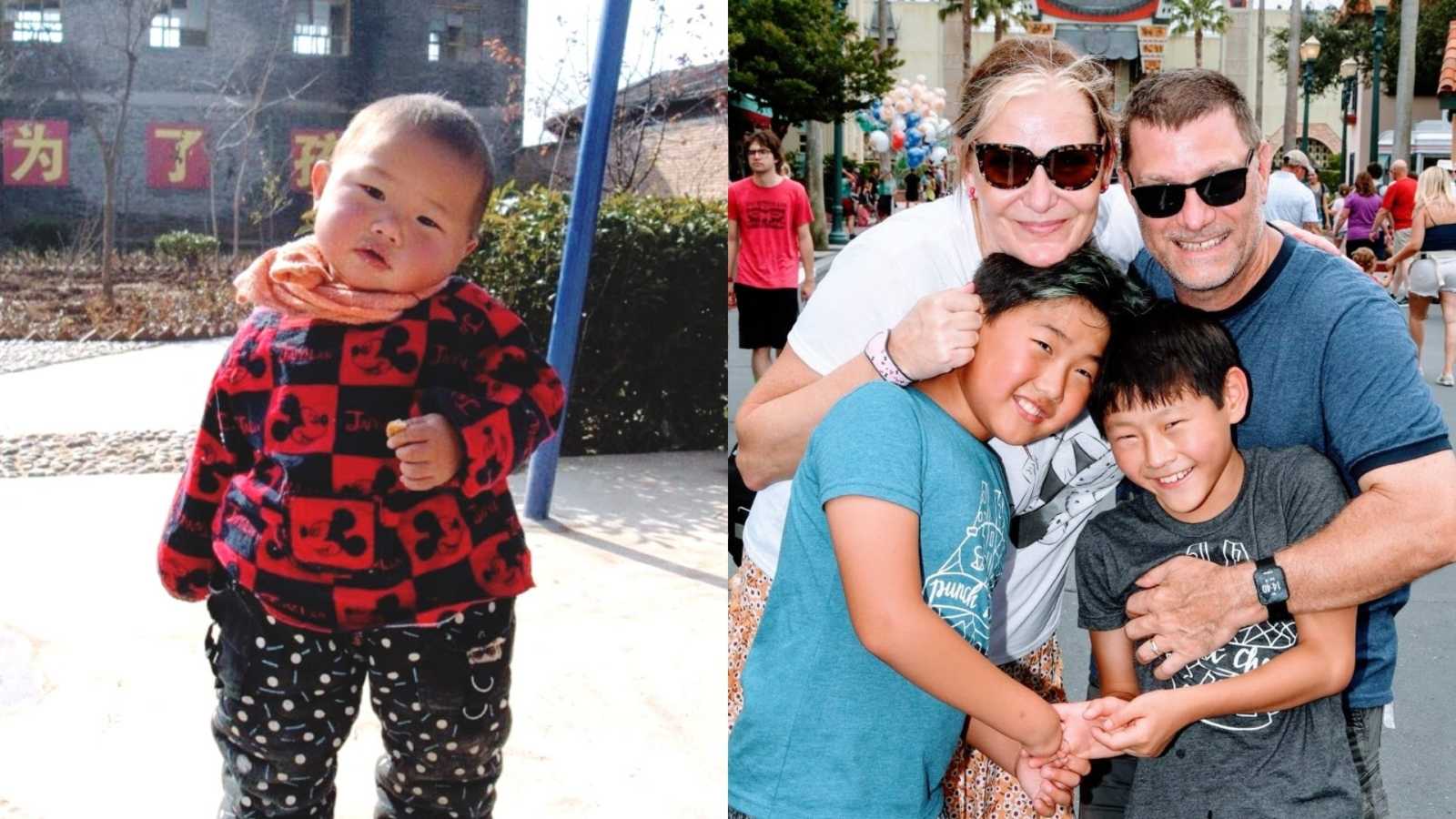 I’ll give you a sec to process that math.

For a variety of reasons, we decided China adoption was the best fit for our family. No adoption is unicorns, butterflies, and ‘hashtag blessed.’ There are definitely downsides, and one of the biggest drawbacks of China adoption is our kids came to us with virtually no pasts.

We received very limited medical and social information, which may or may not be fully accurate. I think about their birth parents and their beginnings and their lives before we entered the picture, and it’s frustrating for everyone that our answers come up so woefully short.

Today, my boys are 11, and they’re fairly typical 11-year-olds who don’t ask a lot of deep questions and have so far seemed fairly uncurious about their lives before us. That doesn’t release my responsibility to preserve what I know and to try to know more because someday, they will want to know more and want more pieces of the puzzle than I probably have.

Through the beauty of the internet and the happenstance of the stars lining up, I found a little sliver of my son Zack’s history. It may or may not be important to him someday, but it is important to me.

Things we did know: it was one of the most polluted places in China, and most of the kids in the care of the city orphanage lived in foster care.

I used to belong to an online forum (this was before the days of Facebook groups for every purpose) for China adoption called Rumor Queen. RQ is no longer online, but it was a great resource in its day.

I got a lot of great info and connected to a lot of people I consider my friends today through RQ. China adoption is a wild ride, and I appreciated having some people to relate to who were going through the same thing.

Let’s go back to 2013. We’d been home with our son Zack for about four months and were already in-process to adopt Kyle. I was still stalking the RQ website, mostly for information and connection to do with our in-process adoption. When I saw a thread or question pop up about either of my kids’ provinces, I would read and join the conversation. It felt like sort of a small club and by connecting, I’d either get information or be able to answer someone else’s question.

I saw the profile of another mom who had disclosed her family was adopting a child from the same hometown Zack was from. She had a blog listed, so I clicked on that to check out her pictures and read her story. I saw a picture of her soon-to-be son. I chuckled because her baby boy was wearing pastel ruffles. Baby attire in China is…different.

The picture stood out to me because it was taken in front of the same building as a picture I’d received of Zack prior to his adoption.

Throughout the China adoption wait, which for us was about 18 months for the first adoption and about 11 months for the second, we got the opportunity to send and receive pictures and updates, which we treasured because it provided that little piece of our kids’ histories. It’s not a lot, but we cling to what we have.

We were very fortunate to get frequent updates and pictures of Zack as we waited for our approval to go to China and complete his adoption. This was one of the pictures we got:

When I looked at the other mom’s blog and saw the picture of the boy in the ruffles with the same background as Zack’s picture—I am assuming it is the orphanage or some kind of government or school building in their town, but I’m not sure—I started looking more closely at the picture.

We adopted Zack in August of 2012. He turned two in July of 2012. We’d been hoping we could complete his adoption before he was two—I had ridiculously pinned all my hopes on this happening—and in mid-June, we realized that wasn’t going to happen. We used a service to deliver a birthday cake to Zack’s orphanage with the understanding (or hope!) that the person who delivered the cake would be allowed to snap a few pictures. If I couldn’t bake him a cake, this would be the next best thing, right?

We lived in anticipation of getting those pictures. Along with the pictures, we got an update. We learned Zack liked fruits and sweets and toys that made noise. We learned he slept with his foster mother and there were other foster children in the home, which aligned with what we saw in our precious pictures.

Anywho. I looked at the pictures of the little boy about to join his new family, and I couldn’t shake the feeling I’d seen his face before. It finally came to me, and I pulled up Zack’s birthday party pictures that were taken about a month before we’d met him.

I thought the boy in the ruffles was the same boy who was sitting in the high chair in Zack’s birthday picture.

I went back and forth. I tried to convince myself I was seeing things.

I put the pictures on my computer screen, side by side. The picture of the boy in ruffles from the other mom’s blog and the picture of Zack’s second birthday party. I called my husband to come look.

I expected a wait because I’d been bouncing back and forth between these two pictures for so long. Also because my husband is an analytical sort of guy and he’s slow to come to any kind of conclusion.

I sent the mom from Minnesota a message through the website letting her know I had a picture of her son and I believed our boys lived in the same foster home. I asked if she wanted me to send it to her, and of course, she said yes.

A connection was formed, the tiniest of threads.

For both of our families, this is a puzzle piece we’re able to give our sons. It may mean something or nothing to them later on. They may need or want a connection to their early years. Maybe they’ll be friends.

We got to unexpectedly meet our foster-in-laws a few years ago. They came to our hometown for business (without their kids), and we met them at their hotel and got to hug them. If our boys want to know each other down the line, we’ve paved the way for them to have that connection.

It’s a fluke we are connected, but it’s kind of a cool fluke.

How this puzzle piece is played out is up to two boys from a remote coal city in Northern China.

I wish we could give our kids more than these little half-nuggets that lead to the mysteries of their pasts. For now, I have a foster-in-law, and I’ll keep that connection open. Because for now, this is what we have. And we cling to them, in case it matters someday.”

This story was submitted to Love What Matters by Jill Robbins of San Antonio, Texas. You can follow her journey on Instagram, Facebook, or her blog. Do you have a similar experience? We’d love to hear your journey. Submit your own story here, and subscribe to our best stories in our free newsletter here.

‘What’s your kid’s biological mom’s name?’ Our kids’ sister had been placed with my best friend. My heart leaped.’: Couple adopts 5 siblings from foster care, ‘There was a greater purpose in it all’ 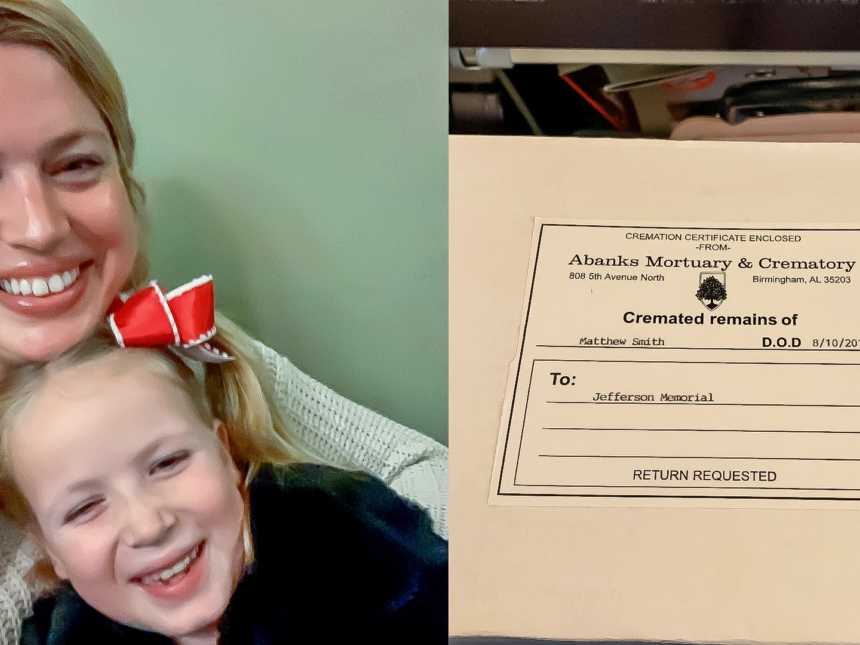 “Before we boarded our plane in Atlanta, I took his remains to the exact spot we touched when he flew into Atlanta. I laid the box down on the exact tile we stood on. The captain came by to give his condolences and let us know that he was honored to take him home and that we would get him there as fast as possible. I couldn’t even squeak out a word when he came by. I just nodded and cried.”