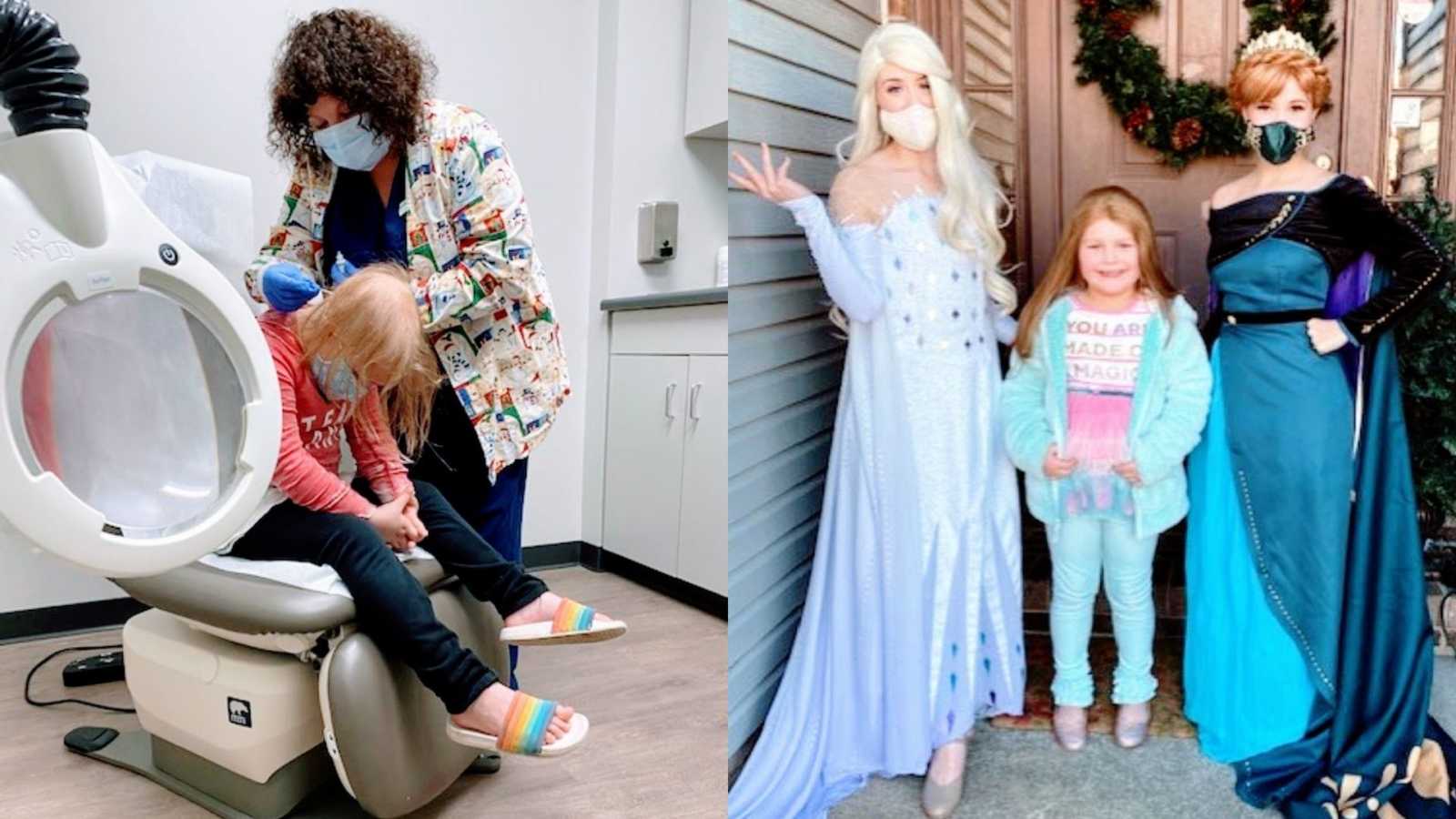 “In October of 2020, we were on a family trip to a cabin in the Ozark mountains. Our youngest child, age 6, had a small bald spot on the part line of her hair. We didn’t think much of it at first. She wears her headphones often, as she is an avid music enthusiast, and often sings songs from Hamilton. After returning home, I felt something was off because the spot had grown a bit. I looked closer at her hair and realized she was missing almost all of the hair close to the nape of her neck.

I was alarmed, but since she is our third child, I’ve learned often times when I think worst case scenario, I’m wrong. I waited a few days, but the hair loss was still bothering me. I decided it was time to seek out a physician. We were able to get an appointment at the dermatology office where we are all patients very quickly, thanks to the concern of our dermatologist.

The day of the appointment, Caroline, my mom, and I visited Dr. Courtney Tobin. Dr. Tobin examined Caroline’s scalp and finger nails. Caroline has had pitting in her fingernails for years. After considering Caroline’s constellation of symptoms, Dr. Tobin diagnosed her with Alopecia Areata. Dr. Tobin talked to Caroline as the patient and not just to me. Dr. Tobin explained that Caroline’s body was fighting her hair, which would make it fall out. That her body saw her hair as a germ. Caroline said, ‘Well that’s silly. Will all my hair fall out?’ This is a question no one can answer. In some cases of Alopecia, the hair loss is patchy, but for other individuals they can lose all of the hair on their scalp or their entire body. These conditions are known as Alopecia Areata, Alopecia Totalis, or Alopecia Universalis, respectively. As of late December, Caroline has lost about 90% of the hair on her head.

The diagnosis was scary for Caroline, and the first few days after were challenging. She worried at school all of her hair would fall out at one time, or someone would make fun of her for her bald spots. I was worried too, but also grateful she was 6 and in the first grade. I cannot imagine how challenging this condition would be for an older child, who is more concerned with their appearance.

My husband and I asked Caroline if she wanted to share her diagnosis with her classmates and friends. She very much wanted everyone to know, so they would understand why she was losing hair. I looked for an age-appropriate book to share with her class. Caroline and I ordered the book Hair in My Brush and she decided to take it to school to have her teacher read it.

Caroline attends a wonderful school with students in grades kindergarten through second grade. It was decided Caroline would share her story with her class first, but then she would go ‘on tour’ to have the book read and answer questions to all of the other first grade classes and the classes she shares recess with. Caroline’s teacher said she was a little hesitant at first when they began reading the story, but soon she jumped in to answer her classmates’ questions. There has been such a huge amount of support from her school community. Her teacher worked with the principal to give permission to children in her class to wear a head covering or hat to support Caroline. She also learned one of the teachers at her school has Alopecia, too. This teacher offered to answer any of Caroline’s questions. When the teacher told us, Caroline quickly responded, ‘Great, because I have lots!’

At her first appointment with Dr. Tobin, we asked for a letter to be written that explained Caroline’s diagnosis, so we could begin the process of applying for a wig. Caroline has stated from the beginning she wants a wig. Well, actually she wants three wigs, one of which she plans to dye the ends pink. I began to investigate charities that provide wigs to children who suffer from hair loss. I learned there are several who provide support to children with hair loss due to cancer treatment, but not as many charities that focus on any type of hair loss.

I decided to submit an application to Children With Hair Loss. The organization came highly recommended from the Alopecia parent’s groups I follow on social media. The application process was fairly simple. You submit a letter from your doctor, measurements of your child’s head, preferences for the style/color of the wig, and pictures of your child prior to their hair loss. Human hair wigs, like the ones provided by CWHL, are costly and time consuming to make. The average cost of a wig starts at close to $1,000 and can be significantly higher. CWHL provides one wig per year to a qualifying child. This is such a relief to families like ours who know their child will likely need a wig for years to come. We submitted our application on November 3rd and the wig had shipped by December 2nd.

As one might imagine, I was frantically tracking it. The tracking was not moving…at all! We had arranged for Brittain’s Princess Parties to deliver her wig on December 19th. Caroline loves all things princess, but she especially loves Frozen. Caroline has had two birthday parties with Brittain’s Princess Parties, so we thought it would add to her excitement. Anna and Elsa were going to be a part of her big surprise, but the package was just sitting in South Rockwood, MI.

On the night of December 10th, I took to Facebook in desperation, hoping to find someone who may live close to the post office in MI to check on the wig. The support and offers of help we received were unbelievable. Within 24 hours, Jodi had driven to the post office in South Rockwood, Senator Durbin’s office had been contacted, and a friend of a friend had reached out with information he had collected by calling our local post office and the one in MI. On top of this, there were so many others who offered various forms of assistance to get this wig to our girl.

Saturday morning, I woke up to see the tracking had updated and the package was in St. Louis. I was hopeful it would arrive on Saturday, so we rescheduled Anna and Elsa to Sunday. Sunday morning the tracking said it had arrived to our local post office, but it wouldn’t be delivered until Monday, December 21st. I don’t like to lose, so my mama bear took over. I tried calling the post office in town – no answer. I saw the mail truck drive down our street, and I may have chased them down in my pajamas. The carrier told me there was no one at the local office, and they only deliver for Amazon on Sunday. I was feeling defeated as I walked back inside, but then my phone rang and it said USPS Rockwood, MI.

I answered to a woman on the other end named Beth. She said, ‘I’ve had several calls about the package you are awaiting. The tracking shows it is at your local post office. We deliver on Sunday right now. I know someone is there. I’m going to call and have them hold it for you to pick up.’ About 10 minutes went by, and Beth called back to say, ‘They are holding it. Just go to the back door and ring the bell.’ My older daughter and I headed straight to the post office and picked up the wig.

After picking up the package, we called my mom to let her know we had it and wanted to wrap it before Anna and Elsa arrived. The wrapping paper she found in the basement was just perfect – silver snowflakes! Anna and Elsa arrived three hours later and delivered the wig and a Christmas miracle to us.

Two days after Caroline’s wig arrived, the local middle school cheer team came to deliver some ‘CHEER’ to her with a parade and sideline cheer. Due to the pandemic, the cheerleaders haven’t been able to practice much or compete. Their coach is focusing on building character during this challenging season. Their focus is on growing through bringing kindness to the community. I’m not often moved to tears, but to see Caroline’s eyes light up as the cars paraded by and she was showered with love, is something I will never forget. After the cheer team left, Caroline told us numerous times it was the best day of her entire life!

We know Caroline’s journey is far from over, but this experience has given us overflowing hearts, and a solid reminder people are overwhelmingly good. In a year where it is often hard to find the good, the past two months have reminded us there is always more good than bad, more helpers than whiners, and more problem solvers than instigators.”

This story was submitted to Love What Matters by Katie Robberson of Edwardsville, IL. Do you have a similar experience? We’d like to hear your important journey. Submit your own story here, and be sure to subscribe to our free email newsletter for our best stories.

‘A gentleman stopped me as I headed for the doors. ‘Go get it.’ He filled my hands with a giant palmful of cash and pointed to a huge, fancy tree.’: Woman recalls powerful act of kindness during Christmas season

‘I need a favor.’ We had nothing under our Christmas tree. ‘The only thing I was able to purchase was a nail polish. I need you to be OK with that.’: Woman pays it forward after stranger’s act of kindness on Christmas day

‘I gathered the courage to ask, ‘Would you let me paint your head?’ She’d hidden her baldness under a wig most of her life.’: Artist befriends woman with alopecia to show ‘baldness is beautiful’

‘I’m THAT girl who spent 6 months with a ring on her finger. Who planned an entire wedding, only to find out a week prior it was all a lie.’: Woman discovers fiance’s pornography addiction, ‘I felt uncontrollably numb’

‘He was in tears. ‘Baby, it’s bad news.’ It was our last conversation. He was unable to talk the very next day.’: Widowed mother ‘piecing life back together’ after tragic loss of husband

“I watched my gorgeous husband’s body betray him. I held my breath, waiting for him to take another, but it didn’t happen. The woman I was died with him.”

‘My sister is dead. Her babies… I don’t even have money to feed them.’ Their mom was murdered in front of them by their father. They had no one.’: Woman adopts brothers

“He sent me a video of his sister’s lifeless body being pulled from the river. ‘We have to save these boys.’”

‘Try to get him breathing!’ Experts said he’d remain in a semi-vegetative state for the rest of his life.’: Mom of near-drowning victim preaches water safety after ‘preventable accident’

“Leaving the bathroom remains the biggest regret of my life.”