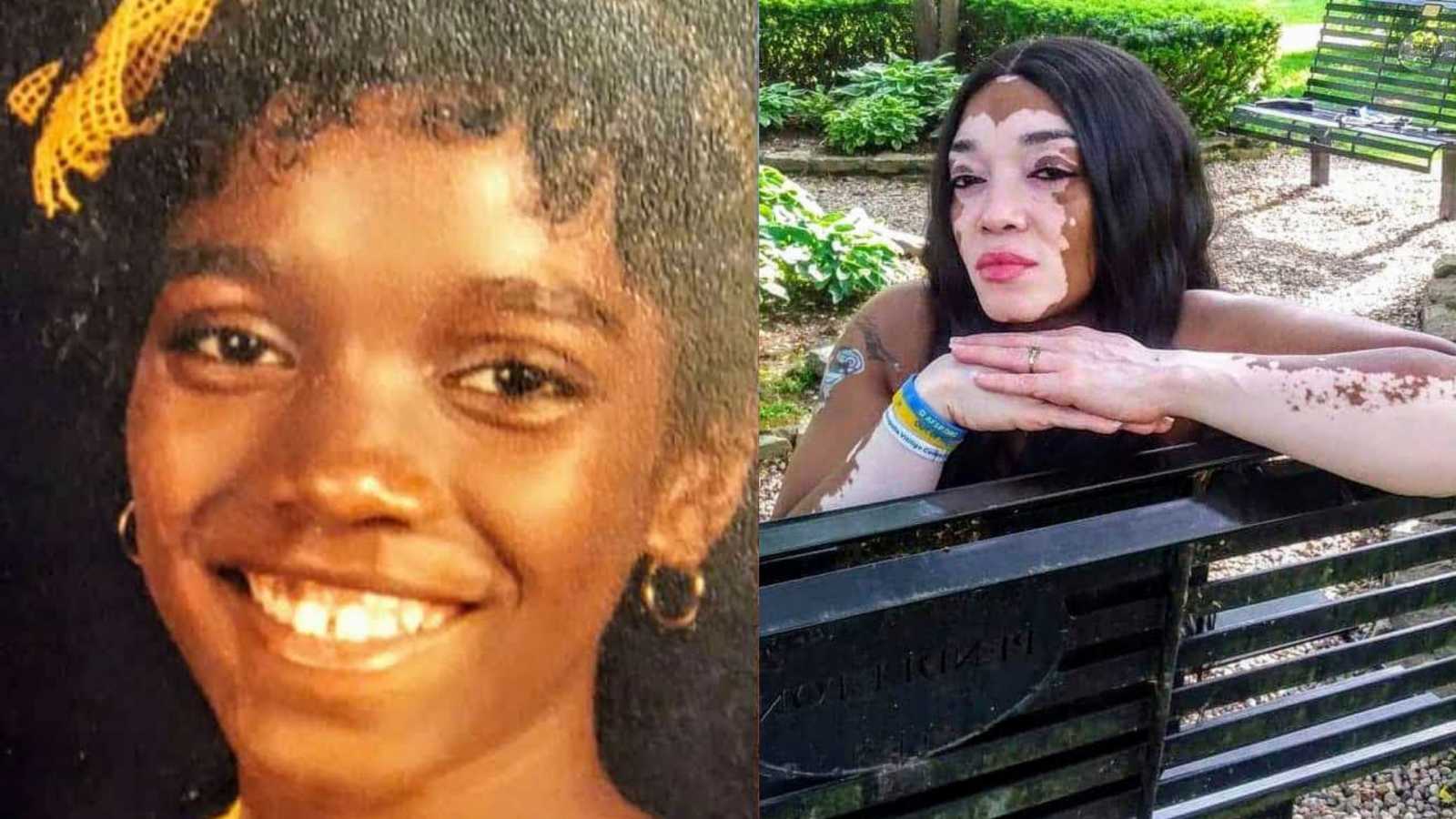 “Around the age of 10 years old, I noticed a very thin line emerging on my nail bed, around my cuticle. When it kept passing on to each finger, and quickly, I was taken to the dermatologist.

They told me I had vitiligo, a condition where patches of skin lose their pigmentation, and rushed me out of the door. At the time, doctors didn’t completely understand vitiligo or how to cure it. They still don’t.

My parents never voiced their concerns about it or asked me how I felt. We were just not that type of family, the one in tune with our emotions. My father handed me a tube of Dermablend, a full-coverage foundation, to keep it covered so no one knew. I used it on my hands and feet. On my face, I used a small circular compact and setting powder to keep the makeup from coming off.

Soon after, I got an appointment to see a dermatologist in Indianapolis. When I arrived, the doctor marinated my hands in liquids strong enough to take my nail polish off, put sunglasses on my face, and placed me under a heating lamp. It looked like a sun-tanning bed, only it stood straight up. It did nothing to help me and was a complete waste of time and money.

Now my vitiligo was spreading fast.

It was on my feet, the corners of my mouths, and my gums. My insecurities were spreading even faster. My brothers often joked I was adopted because I was the only dark-skinned one in my family. Now, I had this to worry about too. Their words stuck with me and I began to believe it.

I remember learning that Michael Jackson had vitiligo and opened up about it on The Oprah Winfrey Show. I wrote a letter to Oprah and sent it, hoping she could save me. When I never heard back, I grew more and more depressed.

In the summertime, just like any other kid, I was excited to go swimming. As I walked across the diving board, I heard a boy scream ‘Look at her feet!’ Embarrassed, I jumped off as fast as I could. I scheduled an appointment with a doctor soon after. I lied and said chlorine was an irritant for my skin. For years, I avoided the water altogether. The doctor’s note got me out of every single swimming requirement for school.

In sixth grade, it spread to the bottom of my lip. In addition to my full-coverage foundation, I began wearing ‘black orchid’ lipstick to cover it up. I was the only girl in sixth grade wearing makeup. I didn’t want to wear it, but I felt I had no choice. I wanted to cover up my secret.

In junior high school, I constantly worried about my makeup rubbing off on my clothes, school work, books, and other people’s clothing. I didn’t want to be exposed. On most of my papers, I would find brown makeup smudges.

My dreams of becoming a model came to a sharp end. I was sure that no one would ever love me, and I would be alone for the rest of my life. I was just the ugly girl with vitiligo. I was the girl turning white. For so many years, I begged God for answers.

Soon after, I met a girl named Charlotte who became my best friend. Even when it took me hours to get ready, to cover myself up completely, I was never rushed. She often hugged me and told me she loved me. Having been raised to roof, cement, and defend myself from the world, I wasn’t used to this. She accepted me unconditionally.

At this point in time, I always covered my hands, which was very hard to do. Any time I needed to wash them, I could only use water and blot them dry with a napkin to keep from taking off the makeup. I loved running track and wanted to be the next Florence Griffith Joyner. But running always made me sweat my makeup off and I would get jittery and nervous about the idea of anyone noticing.

In the end, they always noticed. They always stared. Makeup became my drug.

During this time, I fell in love with a man name Brent who would later become the father of my beautiful child. Although I hated interacting with others, I always felt comfortable around him. But it wasn’t enough to stop the pain; I was not yet comfortable in my own skin. My depression got the best of me and I began cutting my arms with a razor. I didn’t want to be alive. I started missing track practice, causing a rift between me and my father. He never understood how my vitiligo affected me.

One day, I attempted to commit suicide. My mom was in the front room, unknowing. I took a handful of pills and swallowed them. If it wasn’t for Brent, I wouldn’t be here today. I don’t know how, but he knew something was wrong and rushed over. In just thirty seconds, he helped me throw everything up. I owe my life to him.

When I gave birth to my son in 2004, my insecurities continued. On my way to watch a sports game in Indianapolis with my friends, my son pooped and it seeped out of his diaper. When cleaning him up, I accidentally rubbed off some of my makeup. I wanted so badly to fix it, but my products were at home, an hour away. I drove all the way back and we missed half of the game. My friends Charlotte and Marquita understood and never complained.

My worst experience with vitiligo occurred when I got re-married. At the age of 28, I finally found the courage to show my hands and my feet for the first time. I got married to a good-looking man that everyone wanted. I loved him unconditionally, but did not yet love myself. If I did, I wouldn’t have put up with the bullying from other adult women.

They called me ‘panda bear’, ‘monster’, ‘dalmatian’, and ‘oreo’. My husband didn’t take it seriously at all and thought they were harmless jokes. Loving someone else more than you love yourself proved to be damaging. I became suicidal again and suffered from anxiety and depression. Eventually, I found the strength to stand up for myself. In doing so, everything got better.

Attending the event was a game changer for me. I feel like a new woman living in a new and more accepting world. I can better enjoy the time I have with my friends and family, and love interacting with them. When I talk to others, I forget I even have vitiligo, which is a new feeling for me. I have also begun swimming again.

After 32 years, I can now show my real face to the world. It has taken so much weight off of my shoulders. I am a free butterfly now; the cocoon stage is long gone.

Currently, I dedicate my time to advocating for vitiligo. I use my voice to create positive change, giving speeches at schools including Liberty Christian School of Indiana. I am a member of the Live Out Loud charity dedicated to combating bullying and preventing suicide, and the Underneath We Are Women body positivity program. We have a book coming out later this winter.

Although I had the chance to be part of a research opportunity to cure my vitiligo, I turned it down. For the first time in my life, I am comfortable with my skin. Other friends I know have taken up the opportunity; both decisions are okay. Everyone deserves to be happy and live their life.

I am also a model rocking the runway. I have walked confidently for the Paul Mitchell Hair and Fashion Show, Indianapolis Black Expo: Passion4Fashion Week, and New York Fashion Week, and more.

Today, Charlotte continues to be a great friend and one of my biggest supporters.

Despite all my doubts, I have finally found love. I have someone now that loves me for who I am and treats me like a queen. He is my love. He is my hype man. We have three beautiful children: Dominique, Khalil, and Kennedy.

I am no longer hiding in the shadows. I am enjoying life from the front row.”

This story was submitted to Love What Matters by Denise Sawyer Chamberlain of Anderson, Indiana. You can follow her journey on Instagram here and Twitter here. Submit your own story here, and subscribe to our free email newsletter for our best stories.

‘A boy tapped me. ‘Why do you have a mustache? What’s that mark between your eyebrows?’ I was shocked. My face flushed with embarrassment.’

‘I was the ‘fat kid’ and my father was disgusted with me. Fat people were never the heroes or love interests. My mind became a very dark place.’