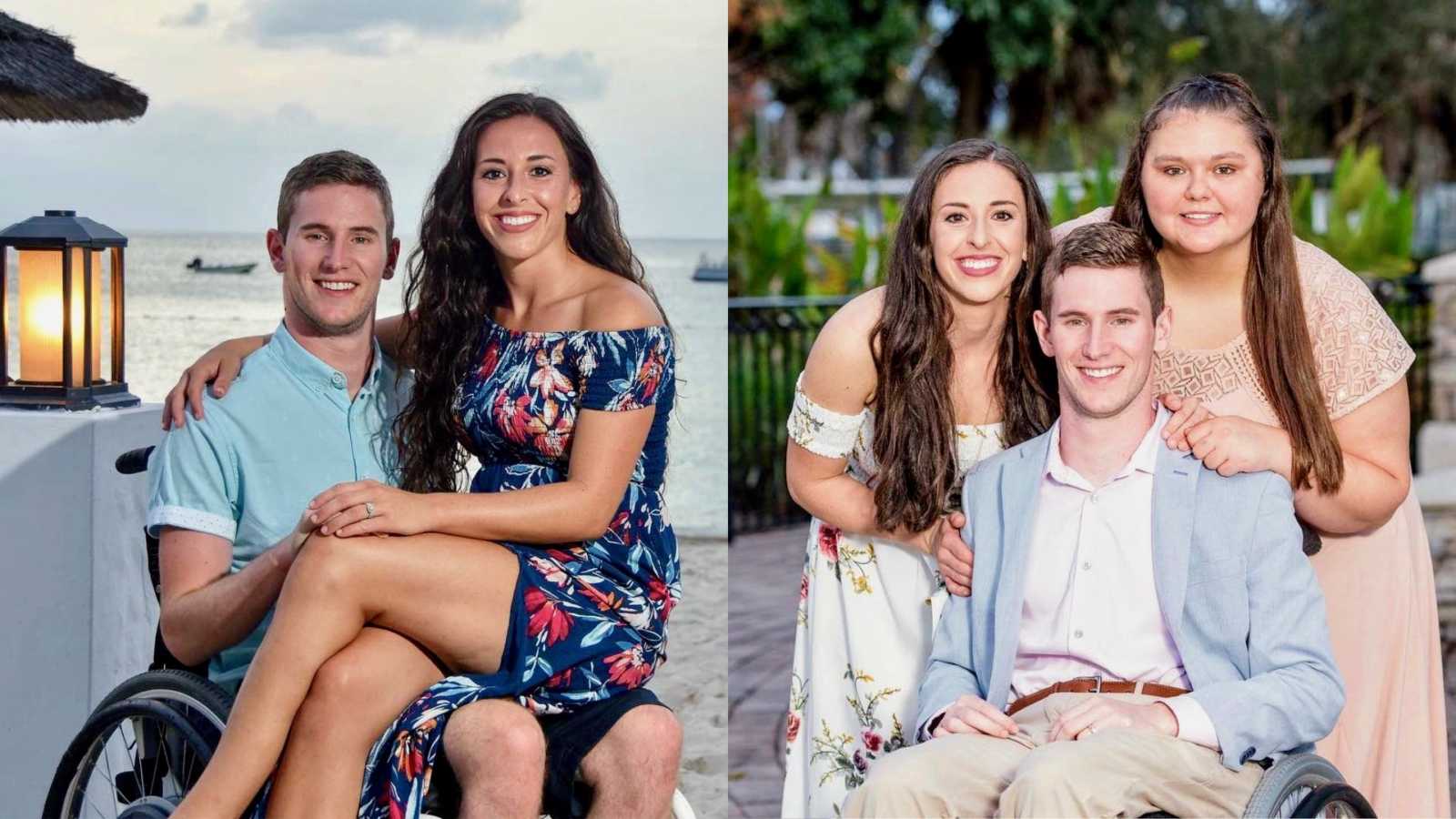 “I never imagined I would meet a guy who was just as motivated to help others as I was. I also never imagined he would be wheelchair-bound. That was, until I met Chris.

Chris suffered a severe spinal cord injury playing college football in 2010. He was running down the field to make a tackle when he mistimed his jump and broke his neck on the ballcarrier’s leg. Chris was given a 3% chance to move or feel anything below the neck. He didn’t let those odds define him.

He went on to regain movement and feeling in his legs and arms, but not enough to walk independently. I was instantly connected to Chris and his positive attitude. We very quickly fell in love. I saw Chris for who he was as a person and didn’t focus on his wheelchair.

Growing up in Muscatine, Iowa, I wouldn’t say my life was perfect, but it was about as close as you can get. My two brothers, my sister, and I grew up in a middle-class neighborhood, went to church every Sunday, and had a mom and dad who showed us that living out your faith means more than just being a good person and doing the right thing. Real faith acts. I took them seriously from an early age, beginning one night when I saw a television show about international adoption that changed my life.

A lot of the details are fuzzy, but I vividly remember seeing baby after baby lined up in small cribs stacked on racks, like some sort of human warehouse. A single light bulb hung over the bare room with a dirt floor. The sight of suffering children devastated me. ‘Mom and Dad, we have to do something!’ I cried. ‘We have to adopt them!’

My parents empathized with the situation of these children, but they didn’t phone an agency and try to adopt them. At the time I was far too young to understand the challenges of international adoption, but that didn’t make me stop asking my mom and dad to do something. I thought about kids from other countries who needed help. I didn’t realize that kids in my own country might also be living in terrible situations without families who love them—much less kids at my own school.

The more time I spent mentoring children who were struggling, the more I believed that God put me on this earth to help kids. Everywhere I went, I saw kids cutting themselves, kids being bullied, kids being abused. I saw kids who had nothing, while I had everything I ever wanted and the most loving family any girl could ever have. Sometimes I felt angry at God for letting these children suffer. Why should I have all these incredible privileges when other kids my age were struggling? I felt I had to do something to help others and made it my goal to do everything I possibly could to make an impact.

‘Emily?’ The sniffling voice on the other line was hoarse from sobbing. I sighed. A tearful call in the middle of the night could only mean one thing—Whittley, a girl I mentored in high school, was in trouble again.

‘What’s going on, Whitt?’ I asked, not sure if I wanted to know.

‘It’s really bad this time,’ she whispered. ‘I’m in big trouble. My sister kicked me out. The cops are involved. They’re putting me in a group home. They might even send me to . . . to . . . to juvie!’ Her voice broke into sobs as she choked out the dreaded J word.

I closed my eyes. This was much worse than usual. ‘Oh, honey, I’m so sorry.’

‘I can’t go to juvie, Emily. I’m so scared. You don’t know what they do to people there. I’m never going to have a normal life if I end up there.’

‘Emily?’ Whittley said, then hesitated. ‘Will you and Chris be my foster parents?’

I was caught off guard, but I wasn’t surprised because I knew Chris and I were her only good option left. We were 23 and 24 at the time and newly engaged.

This wasn’t the first time I’d considered fostering Whittley. I hated watching her bounce from house to house, group home to group home, never getting the help she needed. The idea of her aging out of the foster care system without a real family scared me. I hated to think what might happen to her if she was left to her own devices. After many discussions, we started to take the steps to make it happen.

Whittley moved into our guest room one week before the start of her senior year. We got some funny looks when we enrolled her in the local high school. Not many seniors have parents in their early twenties. From the start, Whittley made all sorts of promises about how she had turned her life around. I wanted to believe her, but I was not delusional. I expected her to fall into the wrong crowd or start making poor choices again. I prepared myself for some tough love and set boundaries right off the bat. Our biggest rule, our one deal-breaker, was simple: if she wanted to live with us, she had to stay in school.

The honeymoon period with Whittley ended quickly. The principal’s office called and called and called with one behavior problem after another. Whittley always told a completely different story than her teacher, so figuring out the truth was exhausting. I had known Whittley long enough to be onto her game. I knew that every authority figure in her life had let her slide through with a slap on the wrist unless she did something truly inexcusable, like punching someone. Chris and I decided early on to stop that cycle once and for all. We didn’t care how small the offense was, there were going to be consequences. Once I grounded her from her phone. Another time I took away her TV so she could only watch shows with Chris and me in our living room. The party was over, and Whittley was furious. It was all worth it as she graduated on time!

Whittley was just the beginning. We accepted a sibling group of four girls the following year, four months away from our wedding. The girls arrived on December 26. The only clothes they had were what they were wearing. All four each only brought one Christmas present. They left everything else behind. I found out later that their aunt purposely didn’t send anything for fear that whoever they were placed with would steal their belongings. Luckily, we already had piles of presents waiting for them. We expected them to be emotional messes after leaving their family, their uncle passing away, and all they had endured. We braced ourselves for the worst, but surprisingly, they were excited to be here.

All of this was just the beginning. There was no getting around it—having five kids was crazy, but I loved it. There were so many moments when I threw up my hands and prayed, God, I need you right now because I absolutely cannot do this alone. But even in the midst of the insanity, I felt this overwhelming sense of peace. I knew God brought us these girls for a reason, and I was determined to give them all the love and help they needed. Becoming a foster parent was the best thing I have ever done. I finally found my purpose and reason for being alive. Becoming a foster mom put everything in perspective. As much as I had always struggled with perfectionism, I realized that those tiny details didn’t matter when I had five kids who needed my attention.

By now it’s safe to say we have no idea what the future holds. If the past is any indicator, it won’t look anything like what we imagine even now. God’s plans are always bigger and better than our own. We can’t wait to see how God uses us next.”

‘We have 2 biological and 9 adopted kids, and all 11 are completely ours. We can now say we have 5 baby-daddies.’