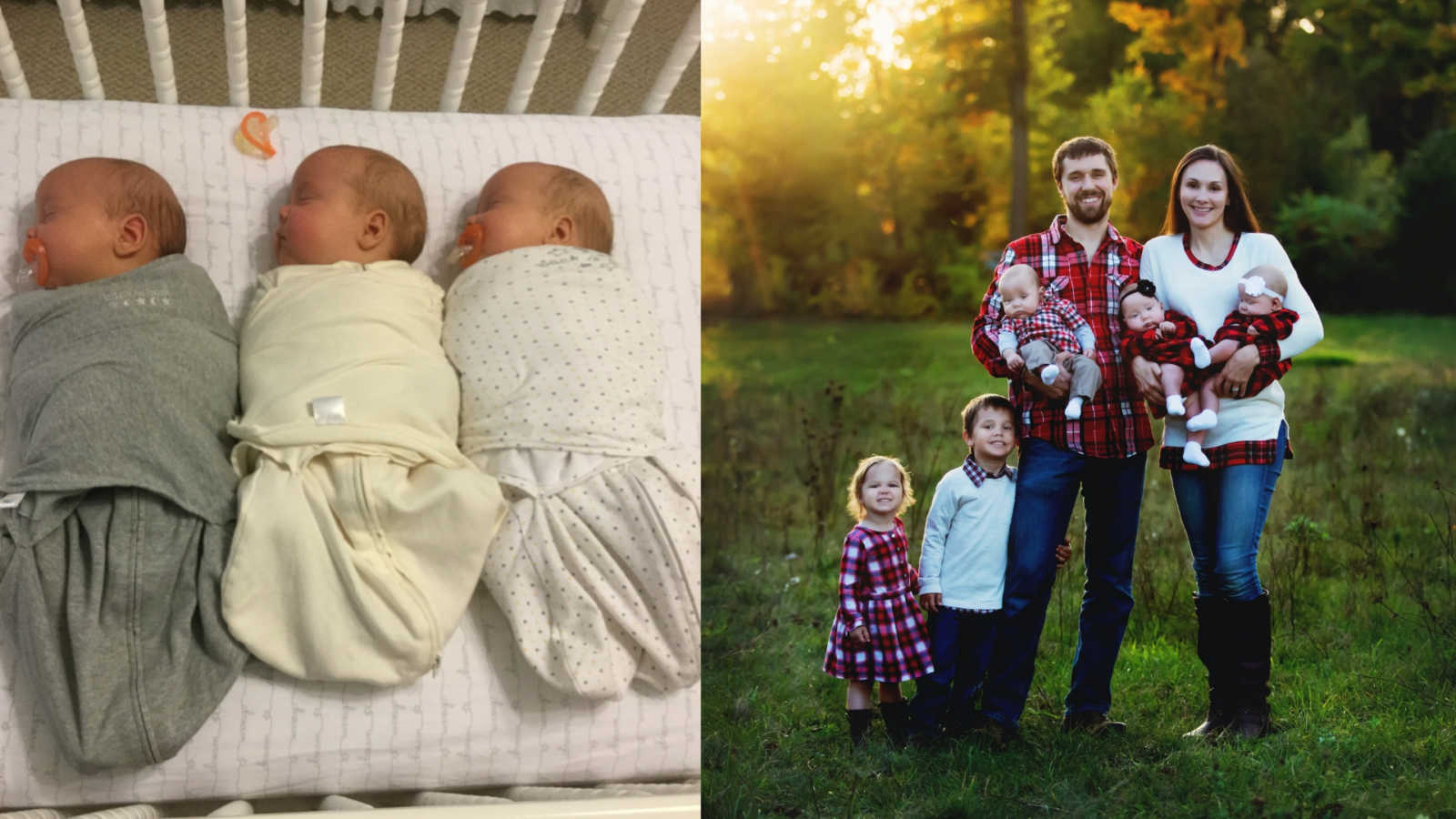 The room was dark and cool as I sat on an ultrasound table, my husband trying hard to pay attention while simultaneously keeping an eye on our 3-year-old son and 20-month-old daughter who were intent on not sitting still. I was staring at what was probably the biggest shock of my life. There on the screen in black and white, were three precious, perfect, tiny little humans with three tiny little heartbeats…triplets! In less than five minutes my day had gone from just another day to a day I will never forget. My heart was racing as I  grabbed my husband’s hand, briefly catching the sound of his nervous laugh. It was as if it was off in the distance rather than right next to me. Everything seemed surreal.

This was not what I had expected from my third pregnancy. No, it was quite a bit more than I’d bargained for. Yet, an undercurrent to the shock was joy. Though unexpected, these triplets were amazing blessings! They were, in fact, an answered prayer.

After the birth of my second child, I faced some unexpected health issues which could affect how many more children I could safely have. It was a very difficult thing for me to process because my husband and I had always wanted a big family. I, however, surrendered the issue to the Lord. I had confidence that if it was His will for us to have more children, then He would make a way.

Time passed and I pushed the thought of more children to the back of my mind. It stayed there, peacefully unnoticed for awhile. But God had more in store for me. He spoke to my heart it was time for another baby. I didn’t feel quite ready, but I knew I couldn’t run from Him. As of October 2016, we were officially trying for baby number three and quickly got a positive pregnancy test, quite to my surprise. By my estimates, I was only three weeks along (I know, I know, I shouldn’t even have tried to test so early but I am ‘that’ person).

It wasn’t long before I began to show. At three months pregnant, I looked more like I was five or six months and it made me a bit self-conscious. I had no idea why I was showing so much, why I was so extremely tired and sick, or why I was gaining weight so quickly! The thought of ‘Hey, maybe it’s twins’ did begin to cross my mind, but multiples don’t run in either of our families, so I knew it was unlikely.

However, here I was, three months along, being told we were expecting not twins, but spontaneous triplets! (‘Spontaneous’ is a word used by the medical community to describe higher-order multiples that occurred on their own with no help from fertility treatments.)

‘Hmm, looks like you have two babies in there,’ the technician had said as she moved the wand.

Wow, those crazy thoughts were right! I knew it. Go mom-tuition!

‘You’re kidding, right?’ I asked the ultrasound technician. ‘Like, you are telling me I’m having triplets just to get a reaction from me?’

She responded with no and switched to a view that showed all three tiny, precious babies on the screen at once. Our identical twin girls were on the bottom and the third, a boy (though we didn’t know the genders at the time) was above them.

I felt shocked and overwhelmed, but excited. God had answered my prayer for a big family, just in a completely different way than I could have ever imagined. It was definitely a blessing, but there are these pesky little things called logistics that started to make my head spin.

How do you feed three babies? Do we need a bigger vehicle? How do you get triplets to sleep? I think we just outgrew our house. How much stuff will we need? Can we afford it? I guess I’m signing up for a c-section. Oh my gosh, I’m gonna be huge!

As our family of four, which became a family of seven overnight, sat there, our hearts were full and our heads were reeling. We did not get much time to process the news before the Maternal-Fetal Medicine doctor came in. He informed us there was already a complication. My heart dropped. My other two pregnancies had been smooth and relatively uneventful, and now I was entering a high-risk multiples pregnancy?

When the tech was looking at the triplets she had kept going back to the twins and saying that she could only find one sac. I wasn’t sure what that meant. The Dr. explained the twins were not only monozygotic (identical), but also monochorionic and monoamniotic. In normal terms, they shared both an amniotic sac and a placenta. This is a relatively rare complication. According to *statistics*, it happens in only 1% of identical twin pregnancies.

Now, just this amount of information had been quite the roller coaster of emotions.

Triplets! Wow! What? Crazy. How do we do this? Complication? High risk? Mono-what?

I would have been quite content if that had been the end of the conversation, but it wasn’t. No, it was only the tip of the iceberg. The fact they were mono-mono twins gave them a 50% chance of not making it to birth. The reason being a high risk of cord entanglement and thus, death. They would also need to be delivered two months early and spend time in the NICU. In about ten minutes I went from excited shock to tears.

Death? Up to a 50% chance of dying in the womb? Do they need to be born at thirty-two weeks? What will happen in the NICU?

I knew, however, our babies were a miracle unfolding and I felt the peace of Jesus envelop me. I never truly understood the phrase ‘peace that surpasses understanding’ until then. It was an experience of feeling peace when you absolutely should not feel peace; everything within you and everything around you suggests you should not have peace. The same God who nudged me toward another baby (babies, apparently), spoke again to my heart. He had a plan.

We gathered up our things, made a follow-up appointment (one of many) and headed home. On our way, we stopped to get some McDonald’s and for the first time in my adult life, I felt zero guilt (wink).”

This story was submitted to Love What Matters by Jenny Ashbay of Michigan, USA. You can follow her journey on Instagram. You can also visit her website here.  Do you have a similar experience? We’d like to hear about your important journey. Submit your own story here. Be sure to subscribe to our free email newsletter for our best stories, and YouTube for our best videos.

‘The ultrasound tech lubed my belly. ‘OMG. There are SO MANY!’ My heart dropped. ‘So many what?!’: Mom births triplets after battling infertility, ‘It’s hard, but in the end it’s all worth it!’