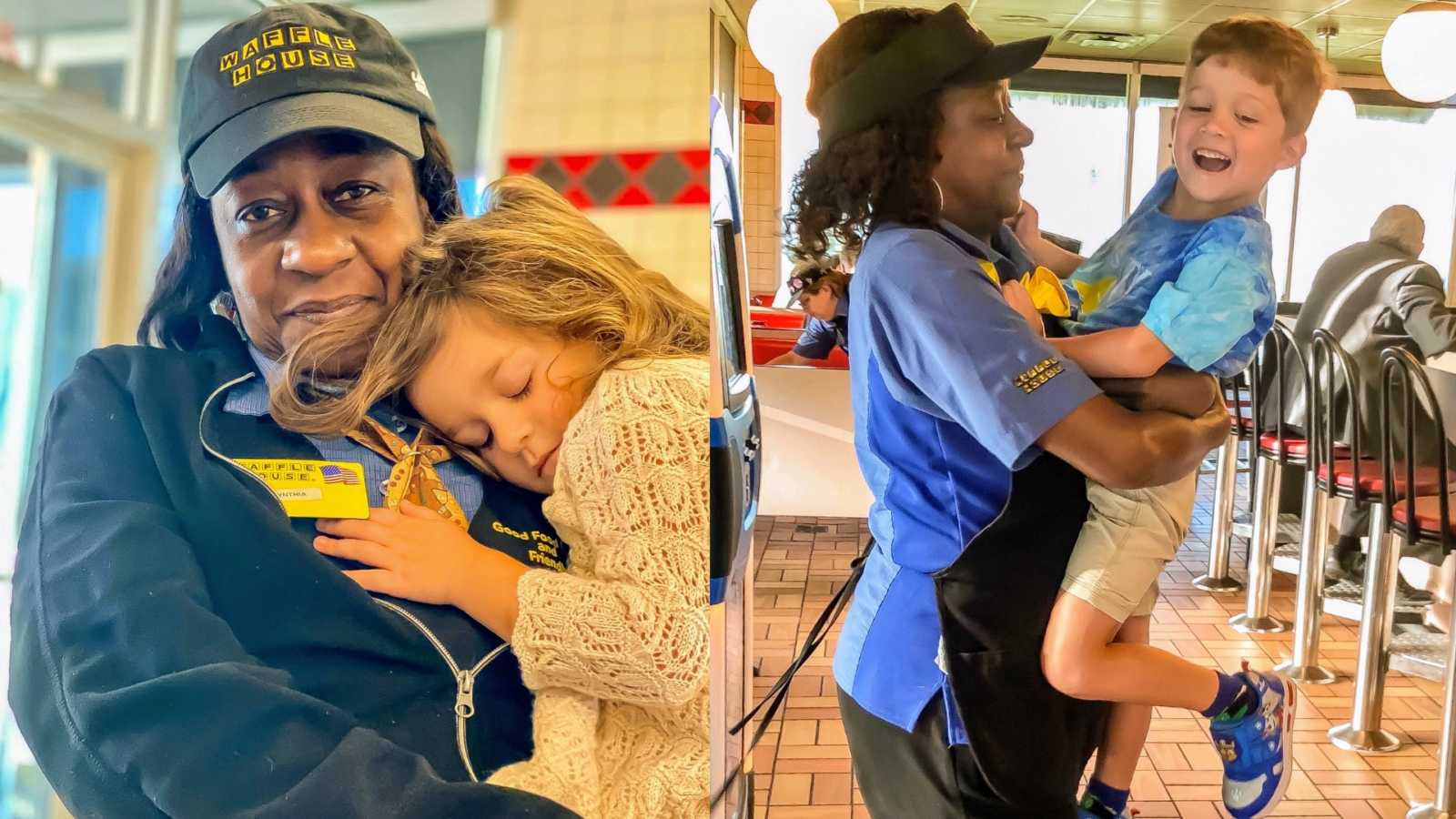 “Mrs. Cynthia has been in our lives for a long time. As long as Holland can remember, this woman has brought raisin bread and apple juice to the corner booth at Waffle House in Fort Myers.

Holland was just a baby back then, but she always grinned when she saw Mrs. Cynthia.

By the time Holland turned one, we had connected with Cynthia on a more personal level. We knew her life story: where she was from, what her children were up to, how her day was actually going.

We started to share more of our lives with one another.

I prayed for her adult son. She prayed for my breast cancer. I wrote the majority of my book in her section. She refilled my coffee and encouraged me when I felt frustrated.

I have grown to love Mrs. Cynthia quite a bit, but NOBODY loves that woman as much as my baby girl.

Holland had her first, second, and third birthday parties in that Waffle House. Nowadays, Mrs. Cynthia places Holland’s order the moment our car pulls into the parking lot.

Crispy bacon, a waffle, and a side of chocolate chips. Always served with her trademark smile

For about two years, the Waffle House staff started playing ‘Let it Go’ on the jukebox whenever we arrived. Rica, Kia, and Cynthia would sing and dance ballet around the restaurant with Holland. They would pick her up and twirl her. I would take pictures and laugh until I cried.

And this year, when Holland decided she was ‘too old’ for all of that nonsense, I’m pretty sure it broke Mrs. Cynthia’s heart as much as it broke mine

The unexpected friendship that bloomed between those two has always been so simple. So easy.

I mean, look at this picture, y’all. It melts my heart.

But things aren’t always simple with kids. As they get older, the wheels in their brains start to spin. Toddlers get curious and ask questions that sometimes a parent would rather not answer.

And you can’t control it. Not even a little bit.

Like today, when Mrs. Cynthia walked away to help another customer. My daughter’s eyes followed her a little more intently than usual.

I should’ve known she was thinking about something by the way she stared with her eyebrows furrowed.

But she didn’t say a word until Mrs. Cynthia came back to sit with us. Then she looked up at Mrs. Cynthia, put two tiny hands on either of her cheeks and asked,

‘Mrs. Cynthia, I want to have dark skin like you. Why is your skin so dark?’

My heart stopped. Race is such a fragile topic, especially these days. And my daughter just approached it with the grace of a bull in a china shop.

I am usually able to stop my kids from asking these things out loud. I see their wheels turning, and I shush them before the words even escape their mouths. But my daughter was too fast, and I was left there, panicking.

But before I could even form response, Mrs. Cynthia scooped up my baby girl and said,

‘Because God made everyone different! Isn’t that wonderful?!’

My daughter nodded her head yes.

‘But, Mrs. Cynthia—if I had your skin, we could both dress up like Tiana!’

And that was that. Cynthia was on to the next task in her busy, busy morning.

This week, I was reading the comments section under a hard-to-stomach news story. It was a race related piece, and thousands of keyboard warriors were engaged in fiery debate.

Some argued racism didn’t exist. Some argued that everyone is a racist.

But the most absurd thing I saw perpetuated, over and over again, were from people who claimed that they simply ‘didn’t see color’.

Here’s the thing: I understand what’s at the heart of this comment.

I’ve been guilty of saying it, myself.

But can we just acknowledge something for a second?

My three-year-old daughter sees the difference between a black woman and a white woman. Human beings aren’t born oblivious to our differences.

And honestly, in so many ways, pretending these differences don’t exist is an insult.

What we must do—intentionally—is teach our children to see and APPRECIATE the things that make God’s people so unique. Whether that be their race, nationality, or religious beliefs…

We need to talk about these things.

Because, spoiler alert: our kids ALREADY see them.

Today, I froze when my daughter broached the topic of race. I did this because fear convinced me I was going to mess things up.

But fear is a liar. And silence is a terrible teacher.

Thank God for the wisdom and grace of Mrs. Cynthia.

Moving forward, I won’t stop my children from asking questions about the world around them. I won’t shush them into silence and teach them that ‘difference’ is a dangerous or taboo topic.

Instead, I will tell them this simple, honest-to-goodness truth, straight from the mouth of our dear friend, Mrs. Cynthia:

‘God made everybody different. And isn’t that wonderful?’

‘My husband is a hottie. But his blue eyes and brilliant smile aren’t what make him The Sexiest Man Alive. His fatherhood does.’: Wife swoons over husband’s ‘sexy’ traits taking care of their kids

‘HOW OLD ARE YOU?’ The man yelled. ‘Five,’ the boy mumbled. ‘THEN ACT LIKE IT,’ he growled.’: Mom appalled by father’s rude behavior at Disney World, ‘I was livid. Kids are freaking kids’