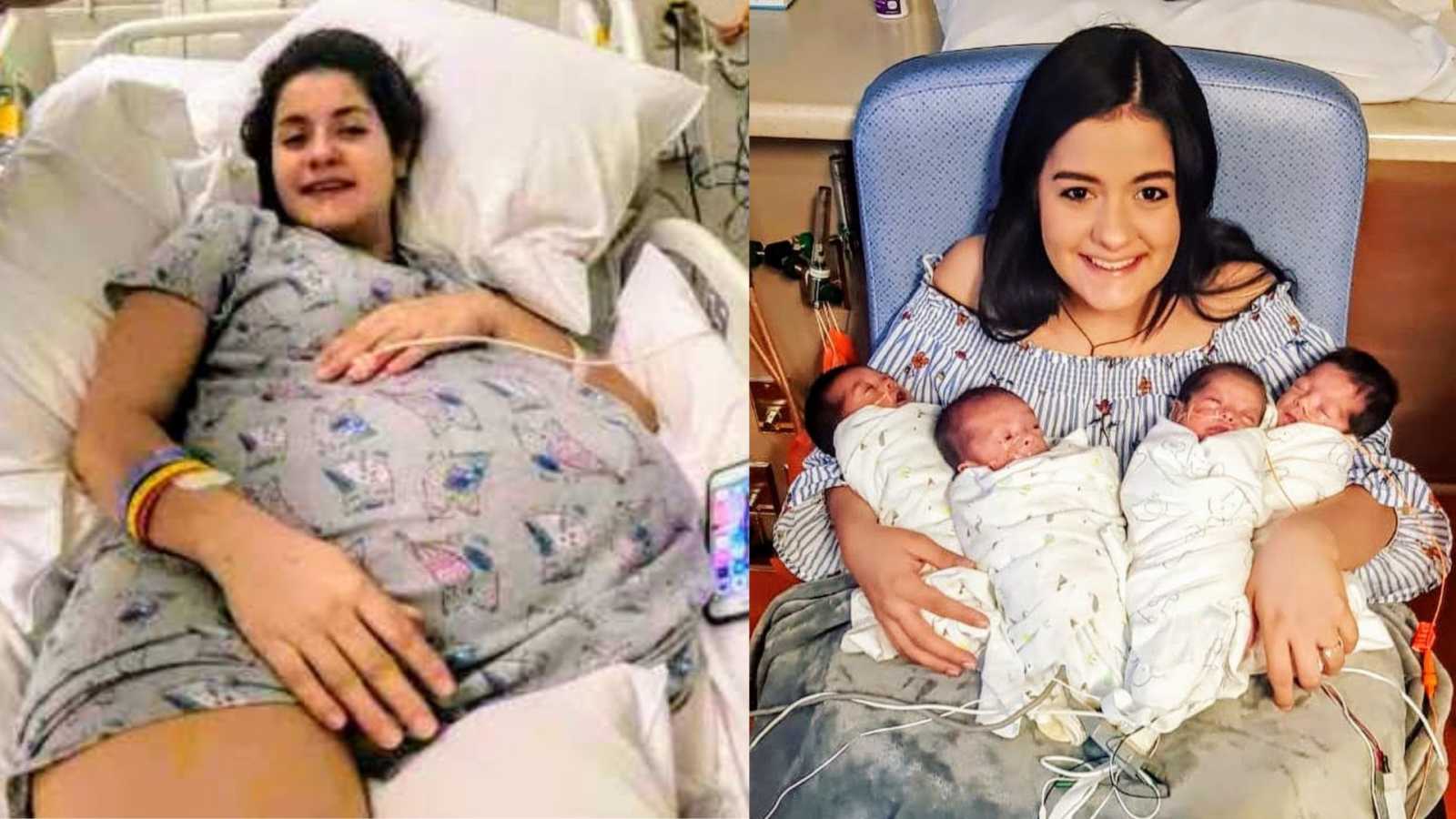 “My name is Lourdes Fuentes. The first thing I will tell you about me is that I am a very fortunate and above all blessed person. I am 26 years old and married to an extraordinary man, Francisco Sánchez. He is 32 years old and we share the great blessing of being parents. But we are not ordinary parents.

On March 11, 2018, my husband took me to the emergency room. That day, we were preparing to celebrate our first anniversary, but I wasn’t feeling very good. My abdomen had started to swell days prior and it became hard for me to breathe. I began to fear that something weird was happening to my body.

They performed several tests and it was determined that, health wise, I was fine. However, I appeared to look 7 months pregnant due to the fluid that had accumulated in my body. They extracted 4 liters of it, but still could not discoverer what was causing the fluid retention.

Soon after, I decided to take a pregnancy test. When the results came back positive, we scheduled an appointment with a gynecologist. At the first appointment, she performed an ultrasound. The fluid made it difficult to determine tiny signs of life, we were informed that it seemed we would be having twins. I was told to come back for a more accurate reading in a week, once my body had expelled the excess fluid.

The possibility that we were going to have twins seemed plausible. In my husband’s family, there are several sets of twins. At our second appointment with the gynecologist, she performed another ultrasound to check if everything was fine and to confirm whether it was one or two babies. I watched as the doctor’s face suddenly changed. She grew silent for a long time. She said, ‘There is something out of the ordinary here.’ I started to feel afraid.

The doctor wasn’t looking at one or two embryos. She was looking at four. Quadruplets! My husband began to question if it was a joke, but the doctor reconfirmed the information. We would be parents to four babies.

The second we left the clinic, fear invaded us. We had heard of risks with pregnancies of this kind. Not only for myself, but for the babies. We were overwhelmed with stress and worry.

When we told our family, they immediately offered us support and good vibes. As Catholics, me and my husband began praying to the rosary every day. In need of a miracle, we got closer to God.

But we already had one miracle. During our investigation into other cases of quadruplets, we found that less than 0.5% of the world had quadruplets, only 1 in every 75 million pregnancies, most of which were conceived by fertility or in vitro treatments. However, our multiple pregnancy was a natural gift. We felt like God was asking us to carry out this difficult, yet beautiful, task.

In preparation for our quads, we moved to Phoenix, Arizona to be near Dr. Elliot, a specialist in multiple births. She had helped to bring over 6,000 babies into the world and I was the 109th patient of hers that was pregnant with quadruplets. It gave us peace of mind to know that we were in the hands of a person with a lot of experience.

On September 8, at just 29 weeks of pregnancy, one of the babies broke the sac. I was admitted to the emergency room, where they gave me medication to accelerate the development of our babies’ lungs and brains. It was a very difficult time given that one of our babies was suffering from not having much amniotic fluid. In addition to labor pains, the medication they gave me began to accelerate my heart and cause complications with my breathing. But I wanted to do everything for the welfare of my children.

At 5 a.m. on September 12, I began to bleed and an emergency caesarean section was necessary. Between doctors and nurses, a team of 25 people was prepared for us. Each baby would have its own group of doctors.

My husband was with me in the operating room as each baby was delivered. I was sedated, but the doctor showed me them one by one as they arrived into the world. Only two minutes passed between the first and fourth baby. Each weighed between 2 and 2.5 pounds. From the moment they left my body, I was concerned about their health. To our surprise, they were all perfectly healthy.

In the five months since their birth, we have experienced many difficulties. We’ve taken them in for countless tests. When one baby got the flu, they suddenly all had the flu. Taking care of four sick infants is like taking care of ten healthy babies, complete madness. Moving four babies around requires great logistics.

But the most difficult has been the moments I have had to nurse them by myself. The second I learned that I would be having quads, I decided to quit my job. My husband must take on the responsibility of providing for them financially. At times, his job requires him to be out of the country. There are even days where his demanding job disallows him adequate time for eating or sleeping. We hope to be together again soon.

The experience of being a mother is unbelievable. I always dreamed of being one, but I never imagined having quadruplets. Although it is very complicated, I would not change this great blessing for anything else in the world. Seeing their faces when I wake up has been the most rewarding thing for me.

Every day, their little smiles make me regain the energy I need to continue. They have filled my husband and I with so much love. And it is because of that love that we decided that each of their names would come from the initials for the word LOVE.

Every day, we get up thanking God for such a great blessing. Even in our best dreams, we could not have dreamt this up. Before the pregnancy, I was told that I had a very small chance of ever getting pregnant. I was diagnosed with Polycystic Ovary Syndrome (PCOS) and told that one fallopian tubes didn’t work. My chances of getting pregnant were less than 40%. Turns out that 10% was just enough for each little angel.”

This story was submitted to Love What Matters by Lourdes Fuentes Sánchez of Phoenix, Arizona. You can follow her journey on Instagram here and Youtube here. Submit your own story here, and subscribe to our free email newsletter for our best stories.

‘Are you sure there’s two babies?!’ The doctor grew silent. ‘Actually, you’re having triplets!’ We were only planning to have ONE child. It felt like the earth stopped spinning.’ Mom pregnant with triplets advised to ‘terminate’ one baby

‘Holy FREAKING COW,’ I yelled. FOUR babies?! Is that even possible? I wasn’t even doing IVF! There must be a mistake, I can’t be having four babies! But there they were, quadruplets.’