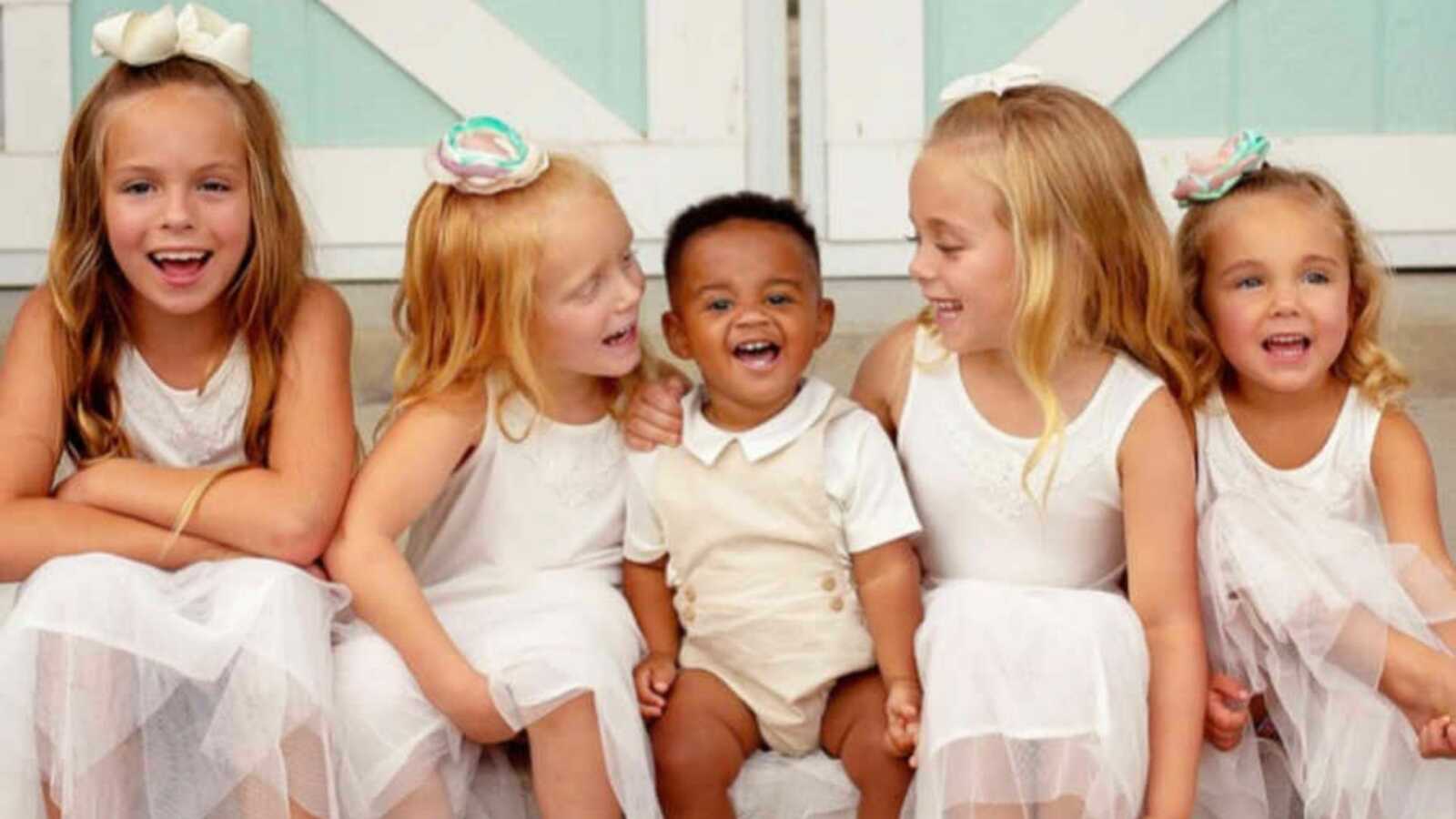 “Sitting at a stoplight on my return home from our morning school routine, I vividly remember the words that changed the direction of my life. I was listening to Joel Osteen radio and he said, ‘God would not put a dream in your heart, if he hadn’t already given you everything you need to fulfill it.’ I broke down in tears at that moment knowing that the call to adopt a child was a powerful force that proved hard to ignore.

Throughout my life I had always loved the idea of adopting a child despite being blessed with six biological children of my own. Different seasons of life, including a divorce, remarriage, finances, a stillborn daughter and my husband’s Major League Baseball career, combined to push adoption to the side in a manner that was often forgotten. After my sixth child and fifth C-section, I was busy being a mother to four children under age five and two preteens when the call to adopt became stronger. Our family was so fortunately blessed and I just could not shake the feeling that we were meant to do something more.

Like many mothers I have spoken to, the same desire to parent a child in need of a home did not fall upon my husband immediately. At the time, his MLB career was coming to an end, he was already parenting my two children from a previous marriage and understandably, was content with four daughters of his own. He naturally questioned the cost of adoption, potential issues with a birth mother and if there were differences in biological father love, step father love and adoptive father love. He innocently just didn’t know how all of those different types of love developed. This is just his nature; he is slow to make decisions as he questions all of the ‘what if’s’ until he is often stuck. Having never adopted before, I explained that I felt when a child is placed in your arms and all they know is you and all they have is you, the same parental instinct that cares and protects our other children, would develop with a new baby.

I continued to pray for guidance, peace and direction. I did research and was told that having six children significantly reduced my chances of a birth mother selecting our family. Another director told me that I would only be able to adopt a medically needy child and would probably wait two years…yet I held out hope that my husband would have more ‘than his big toe in the water’ and that God would show our family the path we were supposed to be on. I accepted that this may never happen.

A few short weeks later, a dear friend, an African-American adoptive parent and ARNP/midwife who I had shared my adoptive hopes with for years, called me one fall day in 2016. When I was recovering from my last C-section and tubal ligation, Sharonn Jones walked into my room to check on me and said with a laugh, ‘This isn’t your last baby.’ She reminded me of that when I answered the phone and told me that that she had heard from an adoption agency who had several unmatched, black, baby boys due in the spring. I began crying on the phone and ran to my husband in excitement knowing that this would be discussion he was not prepared for in that moment. After much discussion over the next two weeks, we moved forward with the process and began our home study.

My husband and I were matched with an African-American, teenage birth mother who had placed a child for adoption the year before. She was pregnant with a boy and due in just 12 short weeks. Race had never been an issue for us; in fact, knowing that black boys were the hardest to place, made our decision easier knowing our family and friends would not have any issues with race. Our birth mother was one of nine children and had experienced a lot of trauma and abuse in her childhood. Although that led to poor decisions, she knew that a greater life existed for her children beyond what she could provide. When I met her for lunch I was the one who left in tears because not only did her baby need a mother, it was apparent she needed one too.

Having had no prenatal care to that point I began attending doctor’s appointments with her. We went to lunch regularly and I became a source of guidance for her in difficult times. We were fortunate that our adoption director, Kristin Van Hof of Evermore Adoption Consultants, was also a birth mother and her gift in assisting families with adoption was invaluable. Our prenatal journey wasn’t always easy as we were dealing with a teenager in crisis. There were the occasional hang ups, often she called me a few choice words but I knew that she was also a child who carried a lot of pain and as a former teacher of at-risk high school students, I knew to expect this. I grew to love our birth mother as the decision to allow us to raise her child was a privilege not lost on me.

I was fortunate to be in the delivery room when our son, Asher, was born. Because our birth mother did not have a supportive or stable family, she delivered our perfect little boy with only me at her side. She spent a few hours with him alone the next morning and then checked herself out of the hospital with a few tears knowing that her precious son would be forever loved and cherished in our home. Prior to her leaving, we may the joint decision for me to breastfeed Asher.  When my husband and I decided to adopt, I was nursing a then 14-month old who struggled to wean. I decided to keep her going in the hopes that the milk supply would be sustained and fortunately, and often awkwardly, my little girl set the table for her baby brother. The birth mother hand expressed her colostrum in the first 24 hours and then fed him by syringe. I then followed up with my own milk for the next year of his life. The bond I have with our birth mother and my son is a unique one and I will ensure that he understands her selfless sacrifice that gave him the life that was not afforded to her.

Adopting our son has been one of my life’s greatest blessings. The sweetest little boy whispers ‘Momma’ to me each morning and then reaches over to kiss my face. Asher has become my husband’s shadow; they have an inseparable bond with our little boy insisting that he curls up in my husband’s arms to sleep each night. These are moments that every parent cherishes and moments that every person who wants to be a parent deserves to have. As a mother who has lost a child, I could not help but want this moment for Asher’s birth mother as well. Before Asher’s first birthday, the other adoptive mother and I brought both babies to her in Florida as a way to unite the siblings with the woman who gave them life. Although we do not know what the future holds, we do know that these children will always know that their biological mother’s love for them was the start of their life’s journey.

Adoption has reset my life’s purpose in that I am a passionate advocate for adoption and young mothers in crisis. I share our story in the hopes that birth mothers know that adoption is no longer the taboo or shameful process it was many years ago. I hope that families considering adoption may not miss out the love of a child because they are worried about that child’s skin color. Adoption is a celebration of LIFE, a decision that birth mothers can be proud of and one that families can rejoice in. Our son’s journey has led to several other adoptions and my commitment to teenage mothers has led to working with young women and their babies in foster care. The tears I shed at a stoplight in Atlantic Beach, Florida, forever changed my life. You do not have to know the beginning of a child’s story to change the ending. ‘Never give up on something that you can’t go a day without thinking about.’  – Winston Churchill.”

This story was submitted to Love What Matters by Jenny Reimold. For more specific information on adopting outside of your race, please read my blog post, ‘Adopting Outside of Our Race: What People Want to Know and What Some Are Afraid to Ask.” Do you have a similar experience? We’d like to hear your important journey. Submit your own story here. Be sure to subscribe to our free email newsletter for our best stories, and YouTube for our best videos.

‘Then he said it, ‘So what should we do now? Adopt a kid or something?’ My chin dropped to the floor. Our family had JUST gotten our heads back above water.’