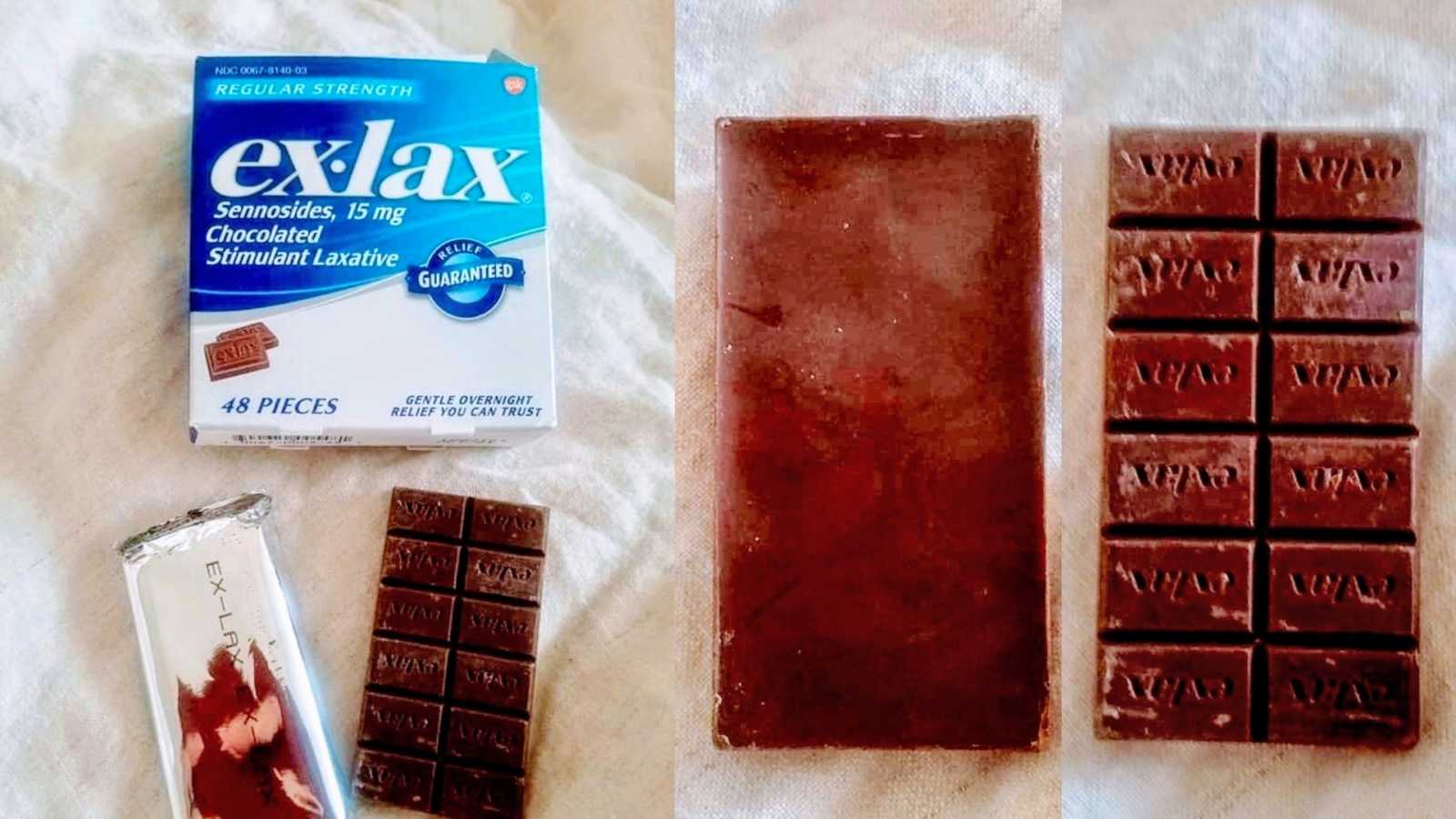 “Oh my God, I have never laughed so hard in my LIFE!

So last night my husband took some Ex-lax. Then this morning, some stuff started going down. Like, literally. He looked at the packaging and realized that when it said to eat 1-2 squares, it meant the tiny squares, not an entire block.

(Husband, baby, I can see where the mistake was made. With that whole block of chocolate wrapped up like one dose, and it flipped backwards like it was, I get it. But good Lord, I can’t even with this.)

So, I’m calling Poison Control because he thought he was dying, and I literally cannot stop laughing. I’m barely able to talk, I’m laughing so hard. The guy on the other end probably thought it was a prank call. I swear to God; I hope they record their calls and enjoy that one at the staff meeting later because even thinking about me trying to explain that my 39-year-old husband just ate a whole brick of Ex-lax is making me wheeze.

The guy was like, ‘The biggest risks are cramping, dehydration, and diaper rash.’

The poison control guy was being all calm and professional and he was like, ‘How old is your husband?’ And I laugh-wailed ‘Thirty NINE!’

I was NOT ready for this dude to come at me with diaper rash. I completely lost it. My husband was so pissed (from the bathroom of course). The Poison Control guy kept chuckling and going, ‘Oh boy. Oooooooh boy. You’ll need to get some Desitin.’

I am not equipped to deal with this kind of crisis. I know it could have been super serious, but OMG

And the funniest part of all is he thought he only took a half dose because he only ate one bar!

My husband said the level of diarrhea that hit him was so violent, he immediately knew something was wrong. He said he grabbed the box of Ex-Lax and read it like that scene in the movie Into the Wild when Chris McCandless realizes he’s eaten the wrong berries and he’s going to die.

He’s going to be fine. I’m still crying. I can’t even drink my latte because I keep choking thinking about it and spitting my coffee back into my mug. I had to lay down sideways in a restaurant booth because I was laughing so hard, I couldn’t breathe, three full hours after this happened. I kept clearing my throat on the call with Poison Control like, ‘Ahem. Okay, I know this is serious. Please continue. AHAHAHAHAHA!!!’

He let me share this story. I have no idea why. All I know is it’s a gift to the universe.”

This story was written by Abby Jimenez. Follow her on Facebook here. The article originally appeared here.  Her book ‘The Friend Zone‘ is available here. Do you have a similar funny experience? We’d like to hear about it! Submit your own story here, and subscribe to our best stories in our free newsletter here.

The Day I Was Banned From Chick-fil-A

‘I’ve birthed an entire baby in the time it takes my husband to poop.’