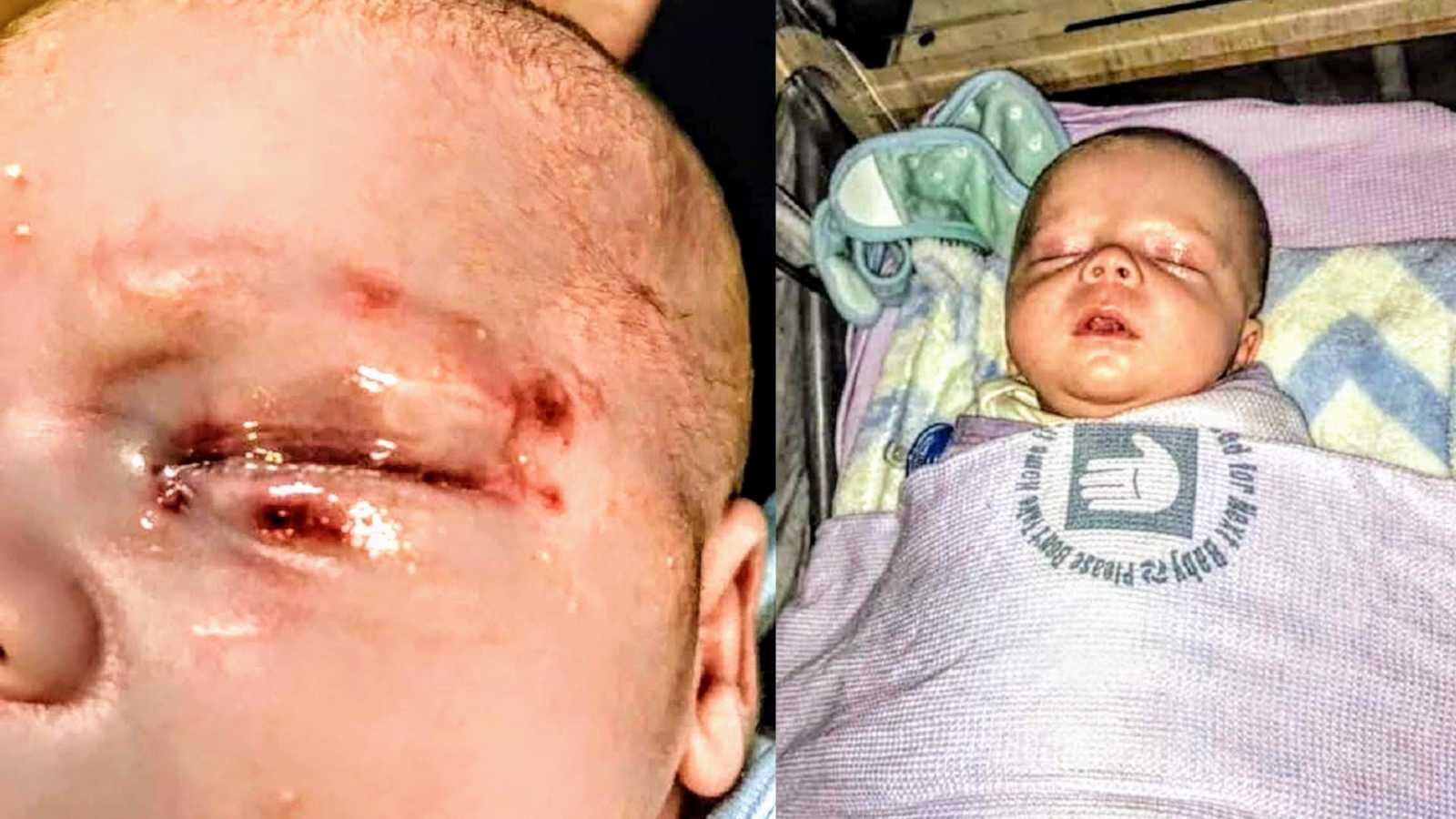 “When I first noticed something was wrong with Noah, he was around 4 weeks old. It was September of 2018 when I noticed his right eye was puffy, a little agitated, and watering a lot.

I was advised by my health visitor that it may be a blocked tear duct, which is something they don’t normally worry about. ‘It should clear up,’ I was told. He didn’t have any high temperature, was still eating as he should, and took lots of wet nappies. There was no other symptoms to make me think he wasn’t well.

A few days later, I noticed he had some blisters appear around his eye and read something on Facebook about another baby having a virus. The blisters looked exactly same. I immediately took him to the doctor who said he suspected something else after me raising concerns. Our doctor referred us to the Barnsley Hospital Children’s Ward where, again, I raised my concerns. Immediately, they started testing him for everything, giving him injections, and antibiotics. After I persisted for a few days, he came back positive for HSV-1, Herpes Simplex.

As it turns out, he contracted it from an adult’s kiss at his christening days earlier.

HSV-1 is more commonly known as the cold sore virus which isn’t harmful to adults. However, in babies it can be fatal. The virus spreads to their brain and vital organs and shuts them down. Even if you don’t have an active cold sore, you can still carry the virus in your system, saliva etc. So, you can never be too careful.

Noah was sent to Sheffield Children’s Hospital  to have a long line fitted as the anti-virals he was on were nasty to his veins. He was given the antivirals for 2 weeks, 1 hour at a time, 3 times a day. He was then to be on the prophylactic antiviral for 6 months.

Unfortunately, he had a re-occurrence in March and again went through the same thing. 2 weeks of intense antivirals and now he won’t be off of his medication until October.

We still have a long way to go before we’re out of the dark, and we’re still continuously having checkups with his doctors and ophthalmologists. But after our appointment with his doctor yesterday, he’S happy Noah is well and happy, so it’s good to know we’re doing something right.

I was lucky enough to catch it in time and still have my little boy here with me today, but some might not be that lucky.

Lately, I’ve been seeing more and more babies becoming ill by contracting HSV-1 (the kiss of death) and I just want to make more people aware of the risks and consequences of kissing a baby/newborn when you suffer from cold sores as I know how heartbreaking it can be.

Hardly anyone has seen the photos of Noah when he contracted the virus and seeing more and more families go through the same thing, I’d just like to spread more awareness of it.

It was physically and mentally draining seeing Noah so poorly and I would do anything to help stop families going through what we went through. So, PLEASE, PLEASE, PLEASE, do not kiss newborns!”

This story was written by Ashleigh White, and originally appeared here. Submit your own story here and be sure to subscribe to our free email newsletter for our best stories.

‘This looks herpetic,’ remarked the doctor at the urgent care center. ‘Who will love me? Now that I have this?’ I mumbled. ‘You should’ve worn a condom,’ the nurse uttered over the phone. 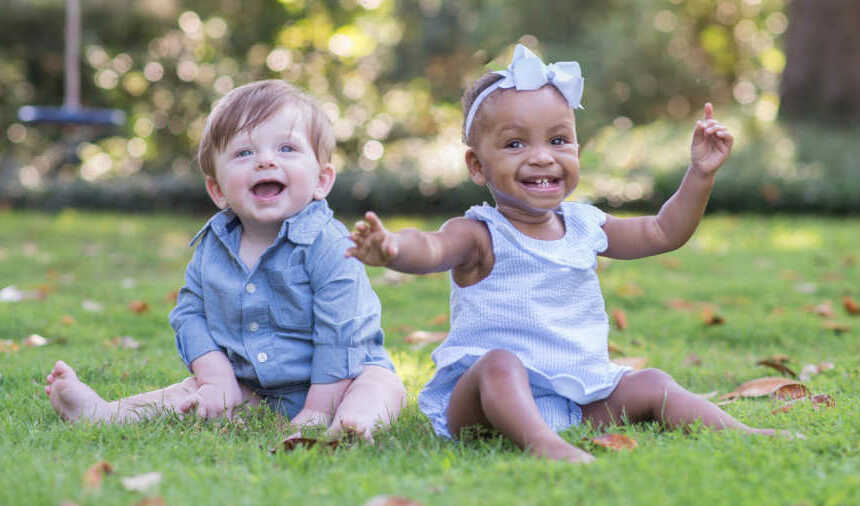 How I Became A Mom To Two Babies Three Months Apart

“I vividly remember the crazy looks I got walking down the street with my huge pregnant belly and a newborn baby draped across my chest. I would probably stare too.” 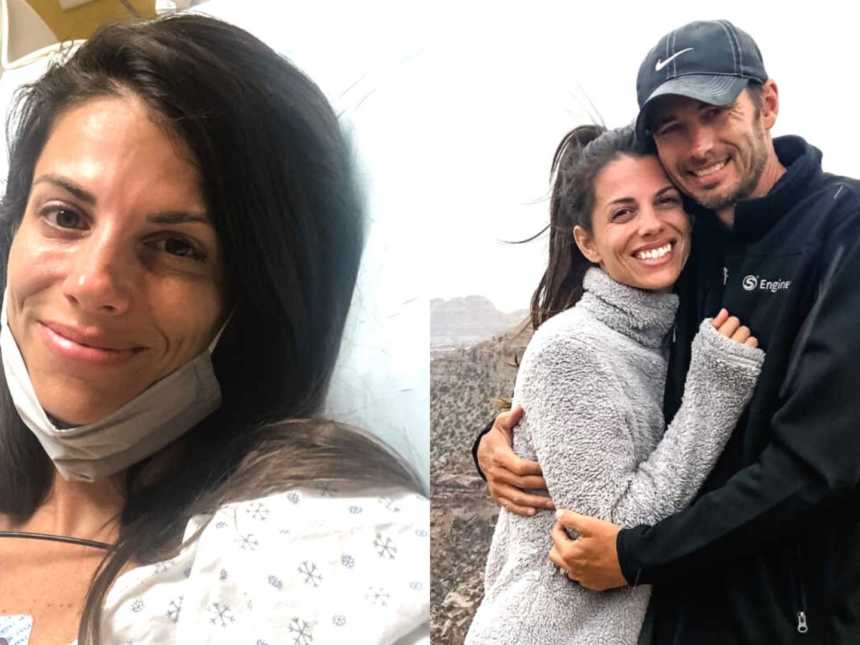 ‘There’s nothing we can do.’ I felt my hopes and dreams slip away. My life was falling apart and nobody could tell me why.’: Woman diagnosed with Ehlers-Danlos Syndrome, ‘I’ll never stop fighting’

“My body’s injustice and betrayal would send me fleeing to a quiet place where I wouldn’t be discovered by my kids. I’d hide in my closet, trying my hardest to muffle my crying. As the tears fell from my cheeks and were washed away, I’d wish they were carrying the sickness out of me.”