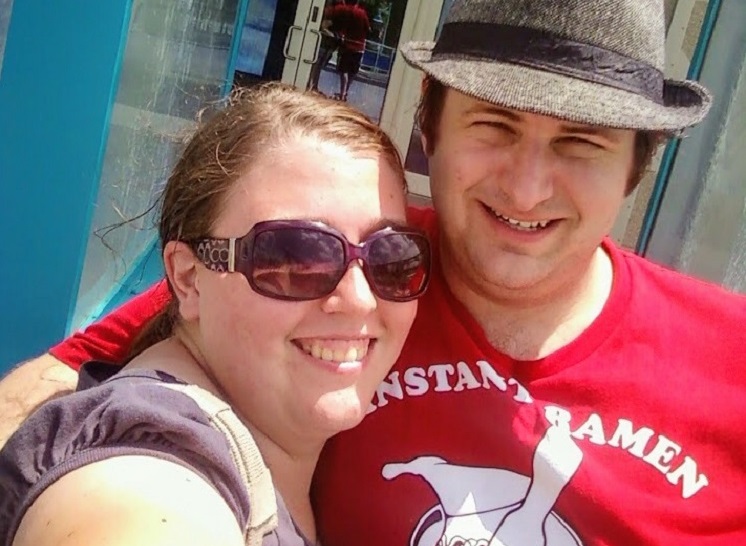 “Ana and I got married about seven years ago, and we had no plans to lose weight.

We were both at one of the heaviest weights we had ever been, but our lifestyle didn’t put us in situations where being obese was a problem. For a few years, we did a few diets, but never really tried. You know, saying you are on a diet, dieting for a week, or month, then going out for fried chicken and never looking back. I had always wanted to be thin but was convinced that my weight was my natural shape, and some people were just destined to be larger.

We kept gaining, and failing our diets for a while. The breaking point for me was during a vacation to New England. While on a short hike, I was completely winded and uncomfortable. I was embarrassed because I used to hike all the time as a kid.

It was about two years ago that I started to try to lose weight. I started with the Weight Watchers app, counting points for everything I eat. I also tried to jog/walk at least three times a week. My wife wasn’t too happy with the counting, and after several months, I had lost about 20-pounds over about six months, and hated every moment of it. I hated jogging and the smaller portion sizes had me always starving and feeling weak. I didn’t want to do it anymore; it was too hard. We had tried the Ketosis diet while we were on/off diets early in our relationship, and we decided to try it again, but to stick with it.

Over the next six or so months, I lost about 30-pounds, and wasn’t running anymore. In January of last year, we had both lost some weight, and were feeling good about it. We were both still thinking, ‘this is our natural shape’ because neither of us really felt like we had changed much, but we were happier. We decided we would stick with it, and we wanted to give ourselves some motivation. We both set benchmark goals and gave us a reward that was worth a lifestyle change. If we hit out goals, we would go to Disney world.

We spent most of 2017 paying close attention to what we ate, making sure we stayed in our diet. The vacation was motivation to start walking again, neither of us wanted to have sore feet at Disney World after all! 2017 was a year of change, and it was like everything we had been working for finally showed. Ana showed a determination I hadn’t seen in her before — the vacation was going to happen, and she was going to make sure of it. During this time, I remember waking up one morning and looking at my thighs, they were thin. I had a moment where I realized I wasn’t meant to be any specific shape or size, that I had control over it. For the first time in my life I didn’t feel helpless about my weight, I felt in control. That feeling alone made it so much easier to keep pushing towards the goal. We would plan out the meals for each week over the weekend, do the shopping together, and cook together (though she does most of the work!)

Last year we both saw transformations that we never thought possible. We grew healthier in body, and as a couple. Losing weight together brought up a lot of uncomfortable challenges for us. Keeping an eye on each other’s eating habits can be tough, but it’s helped us with communication and determination.

Our reward week in Disney world was amazing. I had lost almost 100 pounds, she had lost 60 pounds. We both hit our first major goals, and now we must lose a combined 70 more pounds to hit our final goals, or until we have awesome beach bodies!

It has been an eye-opening experience. The most often asked question of me is ‘how did you two stay motivated?,’ and the answer is just the results. Seeing the scale go down was exciting and motivated us to work harder to see the number drop even more. The hardest part was the first three weeks. After that, it just seemed like another day.”

This story was submitted to Love What Matters by Joe Dolan, 31, of Dallas, Texas. Submit your story here.