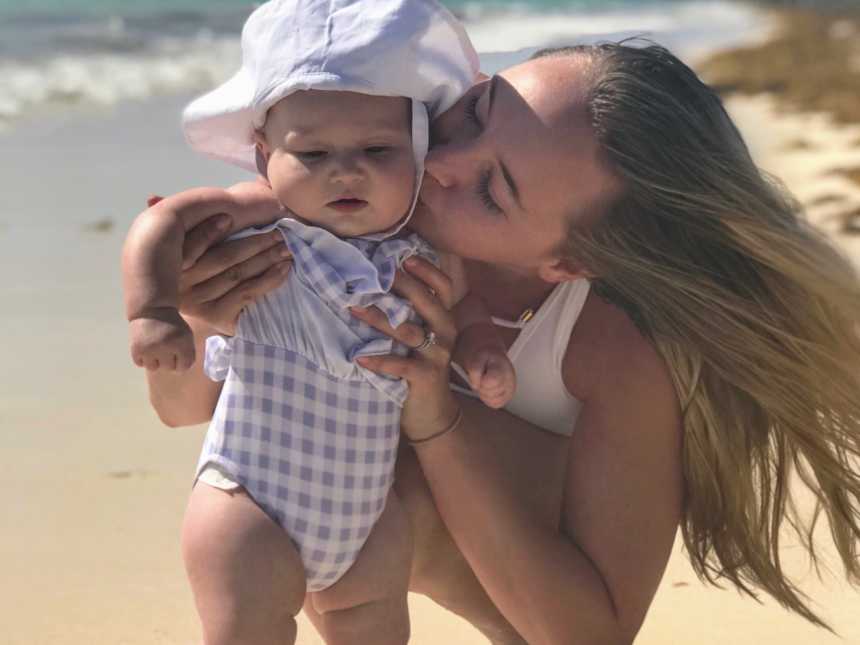 “I feel an obligation to be open about a rare postpartum thyroid condition I have developed since giving birth in hopes that raising awareness can help and protect another fellow mom from having to endure and figure out alone what I have had to since December. Four months after this picture was taken, my whole world was turned upside down.

On Christmas night I began having really intense heart palpitations. I thought it was postpartum depression (PPD) or anxiety, but my heart was beating so fast and pounding so hard it was scaring me. I was finally able to go to bed that night around 3 a.m. but after driving home nine hours back to Colorado from Oklahoma, the heart palpitations began again that night.

The next day I couldn’t stand up. I couldn’t change Elizabeth’s diaper without lying on the ground so dizzy, gasping for air, and blacking out. Same thing when I tried to walk up my stairs or make myself food. I would have to lie on the floor, crying, as I kept holding my chest and feeling how hard my heart was pounding. I am stubborn, so I told Eric I would go get checked out if this wasn’t gone by tomorrow. But tomorrow came, and the same thing happened again.

I went to Urgent Care first. The doctor put his stethoscope to my heart and immediately sent me to the emergency room because my heart rate was somewhere in the 160s-170s. When I got to the ER the physician thought I had a blood clot in my lungs but after many tests, scans, and bloodwork he diagnosed me with Thyroid Storm, a condition so rare that the doctor told me in four years of medical school, three years of residency, and seven years at Littleton Adventist he had never seen anyone like me. He also told me it kills 75% of people that get it, and admitted me immediately for further evaluation. The fact that he was able to correctly diagnose me in such a short amount of time was nothing short of an absolute miracle that probably ended up saving my life. And here I am by myself hooked up to machines trying to breastfeed a 4-month-old in my lap in a different state with no family, no friends, and a husband who was at work in downtown Denver. I am honestly in tears just reliving this day in my mind.

As it turns out, I found out at my endocrinology appointment the next week that I had Postpartum Thyroiditis (PPT) after giving birth to Elizabeth and did not know it until I became so profoundly hyperthyroid four months later that I eventually developed Thyroid Storm.

A few years ago, I was diagnosed with Hashimoto’s Thyroiditis, and was never told that if I have children I could potentially develop a condition that NO ONE TALKS ABOUT: Postpartum Thyroiditis. Even during my pregnancy my doctors were aware of my thyroid condition, but never mentioned PPT. Most moms (like myself) who give birth do not get their thyroid levels checked after they have their baby, and most new moms (like myself) dismiss PPT symptoms as PPD symptoms because they are strikingly similar! I cannot say it enough – the symptoms are almost identical!

Once I was released from the hospital, I thought the worst was over, but I was very wrong. On top of how difficult it is already to take care of a 4-month-old baby, having postpartum thyroiditis made even the smallest tasks of basic everyday function nearly impossible. My hair fell out in clumps every day and since I breastfeed, my baby was covered in it. I lost 15 pounds in six days, I still couldn’t sleep, I could barely regulate my blood sugar, and I would sometimes still have to lie on the floor from being so dizzy just getting myself dressed. I couldn’t fold laundry, make dinner, or hold Elizabeth for too long because my joints and muscles ached so bad and my heart would start palpitating so hard it felt like I was about to pass out.

She would cry, and I couldn’t be the mother she needed so I would cry, too. The feeling of despair and helplessness made me feel like I was failing as her mother on a daily basis. I couldn’t really concentrate on anything or hold conversations for too long because my brain felt so foggy and I was so discombobulated that I would have to close my eyes and be silent to regain my thought processes. My movements and my speech are much slower these days, but I know it is because of my thyroiditis. I can still feel heartbeats in all limbs and areas of my body. Sometimes it’s so bad my chest tightens up and I feel like I can’t breathe and have to yawn to get enough oxygen.

Having thyroid problems seems so far-fetched to people who are lucky enough to go throughout their day without noticing normal cellular processes and reactions taking place in their bodies. But not me. I am plagued with neurological and physical symptoms even I cannot explain. I still struggle with these symptoms on a daily basis, but I would never trade my daughter for any of it. She is my heart and soul.

I find hope in knowing that someday I will come across someone like me who will say, ‘I know and understand exactly what you’re going through. I’ve been there.’”

This story was submitted to Love What Matters by Kimberly Alberts, 27, of Denver, Colorado. Submit your story here.