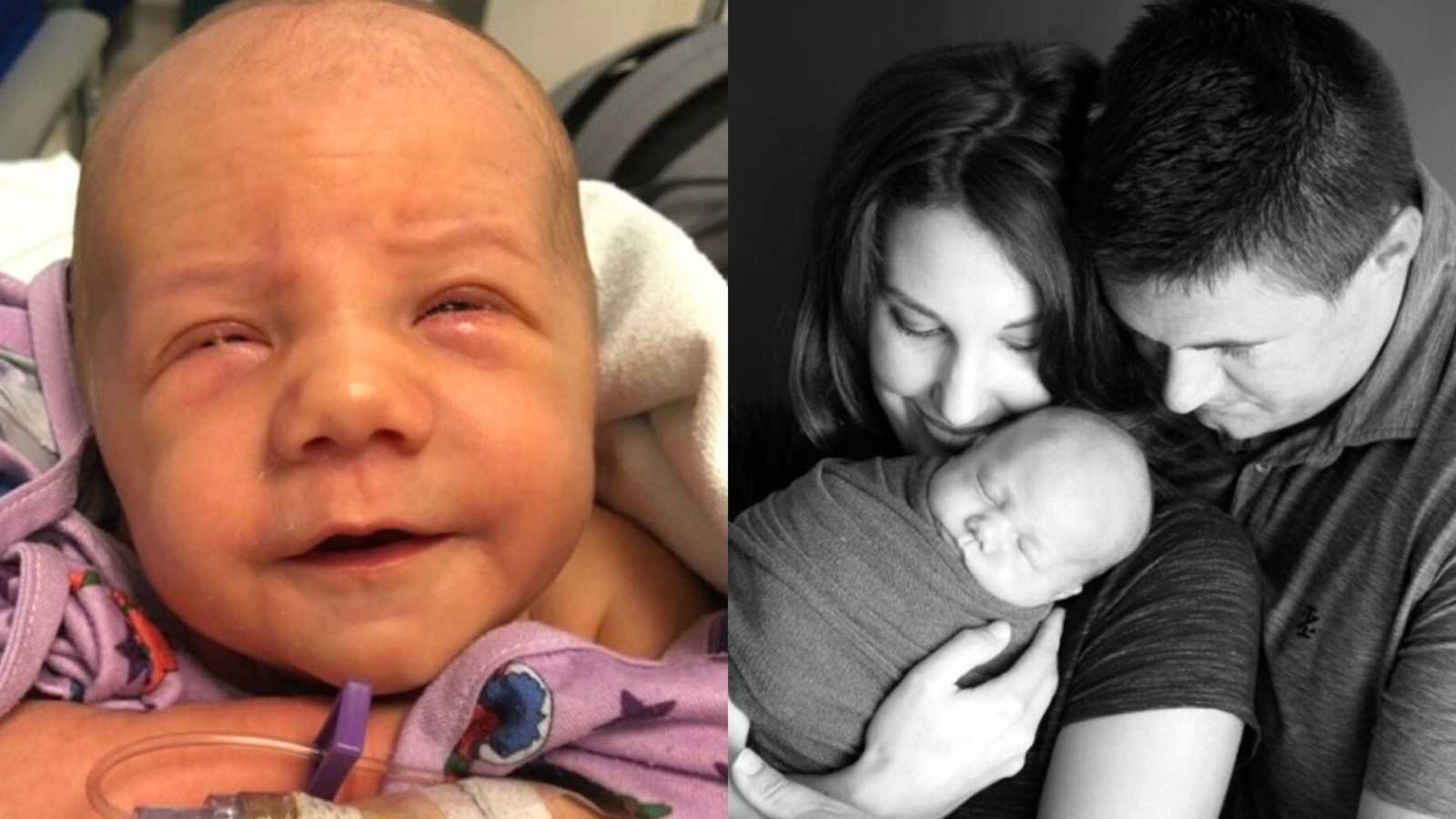 “‘Your son’s eyes aren’t compatible with vision.’ After sitting in our car for hours with rock-hard engorged breasts while my husband was inside with our 3-day-old, this was my only take away from what the doctor was saying over the car phone. So here we are with our first child in the middle of a pandemic where only one parent is allowed in the hospital and on top of everything, I forgot batteries for my portable pump. Talk about facepalm.

Sure, Jensen was measuring small throughout my pregnancy, but there was no way for anyone to detect the roller coaster we were about to encounter. Tuesday, day one of life, Jensen had bilirubin issues. Sure, no big deal, many babies go through this. Wednesday, day two of life, his bilirubin was better but now the pediatrician noticed something just wasn’t quite right with Jensen’s eyes. Not only did the second opinion from another pediatrician agree, but she also heard a heart murmur, which with further testing showed two holes in Jensen’s heart.

By the doctor’s reaction, the holes in the heart didn’t seem to be as concerning as the eye issue. The nursing staff got Jensen squared away with all his normal protocol tests and exams so we could be discharged on time to get to an eye exam with an ophthalmologist down the road.

This was already not right. I was supposed to be blissfully loading my baby into the car excited to get him home to introduce him to his fur siblings, as well as anxious first-time grandparents. Instead, we were sitting in a dark room listening to our baby cry as they pried his eyelids open with clamps. From there, words like ‘bilateral hemorrhage’ were being thrown around. This local ophthalmologist wanted us to be seen at the children’s hospital, where they have more experience with pediatrics, which would be scheduled for the next day. My husband suggested we do our best at forgetting everything we had just experienced and enjoy taking our newborn home.

Friday, day three of life. We drove an hour to the children’s hospital on a beautiful July day, hopeful and skeptical at the same time about our son’s future diagnosis. The children’s hospital would only allow one parent in at a time so I watched Josh walk away with the car seat that held precious cargo. I sat in the car for hours complaining about my throbbing breasts because I didn’t realize the pump battery pack had two sides. I’m pretty sure this was just a ruse to keep my mind busy, as I knew my husband had the short end of the stick. Finally, the time came when I was put on speakerphone, and though many sentences were spoken the only one I truly heard was, ‘Your son’s eyes aren’t compatible with vision.’ Many questions arose from that statement, none of which could be answered by the doctor. Only that Jensen had bilateral detached retinas and we were going to be set up to see an eye surgeon 3 hours away in Chicago come Monday morning.

Monday, day six of life. We packed the car up at 4 a.m. and went on our way. Thankfully, my husband and I were both able to attend the eye surgeon appointment. To save you some time, I’ll fast forward from here because this is only where our journey began. We were told Jensen, my 5-pound baby, was to have eye surgery the next day at 1 week old. We had to drive 3 hours home all while juggling phone calls to our pediatrician’s office, insurance, HR, and the hospital in Chicago where surgery was to be done. As soon as we got back into town, we went straight to get labs drawn at the hospital and then right to the clinic to see our pediatrician to get cleared for surgery. From the pediatrician’s office, we were sent back to the hospital where Jensen was born, to stay the night due to excessive bilirubin levels. By 7 p.m., we were admitted and Jensen was put under the phototherapy light. Not until 7:30 p.m. did we know Jensen’s surgery was scheduled for 7 a.m. the next day.

We left the hospital at 2 a.m. in order to be back in Chicago on time for his eye surgery. I had no idea when we originally left the house Monday morning at 4 a.m. I wouldn’t be returning until Wednesday night. Again, only one parent was allowed in the hospital for the procedure. And again Josh walked away with my son and I went and sat at my aunt and uncle’s house while the estimated 3-hour surgery turned into 6. Some of those anxious hours were spent not hearing a word due to poor cell service within the hospital.

At one point, all I got was he was out of surgery, but then nothing again for an hour. I was having a mini heart attack thinking my 5-pound newborn wasn’t coming out of sedation. Finally, we took Jensen back to my aunt and uncles that night with strict restriction of keeping him face down to ensure the glue stayed attached to his retinas.

For 2 months, we had checkups in Chicago and kept Jensen face-down constantly other than to change his diaper and feed him. The outcome from surgery was a 50/50 shot for some light perception. After multiple eye exams under anesthesia, Jensen slowly stopped reacting to light. In the end, we gained nothing other than knowing we tried.

At 2 months, we saw a genetic team who gave us a couple of options for possible diagnoses. Norrie Disease being the most severe. At 4 months old, I received the call confirming Jensen had the most severe form of retinopathy — Norrie Disease. Norrie Disease is a rare disease that affects males with blindness at birth with a high chance for hearing loss as well. Other issues may include neurological, cognitive, intellectual, behavioral issues, as well as seizures. Our baby was born with a one in a million diagnosis. The most ‘exciting’ part of this diagnosis is its effects on people vary so much we don’t know where Jensen will fall on the spectrum.

Going off of his gene mutation, Jensen is missing chapter 3 of his book. Now we wait to see if this chapter was one necessary to follow along with the rest of his book or if chapter 3 only held small unnecessary information. To put this further in perspective, they explained some kids might just be missing a word, a sentence, or have one letter flip-flopped, but Jensen was missing a whole chapter.

I am still a firm believer everything happens for a reason. As I sat wondering, ‘Why me?’ I also sat trying to figure out the reason or the silver lining. The first thing I came up with is Jensen was going to broaden our horizons. The second thing that was a constant in my mind was the lack of information on the internet but also the lack of videos on YouTube covering vision-impaired kiddos. I knew I had to start a vlog in order to be that little bit of light for someone else. To tell them it’s okay to be upset and to grieve this process, but that it’s doable and rewarding as hell when your kid finally accomplishes that milestone they’ve been working on for weeks. Thank the good Lord for social media and the more accepting views of this generation as we connect with other families and spread the awareness of Norrie Disease and our one in a million baby!

If you’ve made it this far, I just want to shout out to all the amazing love and support we’ve received from family, friends, coworkers, doctors, nurses, therapists, and neighbors. I really appreciate you all!”

This story was submitted to Love What Matters by Jillian from Iowa. You can follow their journey on Instagram and YouTube. Do you have a similar experience? We’d like to hear your important journey. Submit your own story here. Be sure to subscribe to our free email newsletter for our best stories, and YouTube for our best videos.

‘We noticed wobbling in his eyes. My denial turned to heartbreak. ‘I can’t believe I passed on my problems.’: Woman learns to embrace blindness in herself and son, ‘I can guide him through life’

‘Her eyes were going back and forth horizontally, uncontrollably. ‘How do I tell everyone who loves them this?’ My husband was stunned.’: Mom births 2 blind babies, ‘We live joyfully every day’

‘Mom, look at THAT!’ my son yelled. I had no idea what he was referring to. It looked like just a plain storefront.’: Colorblind boy receives color-correcting glasses for first time ever