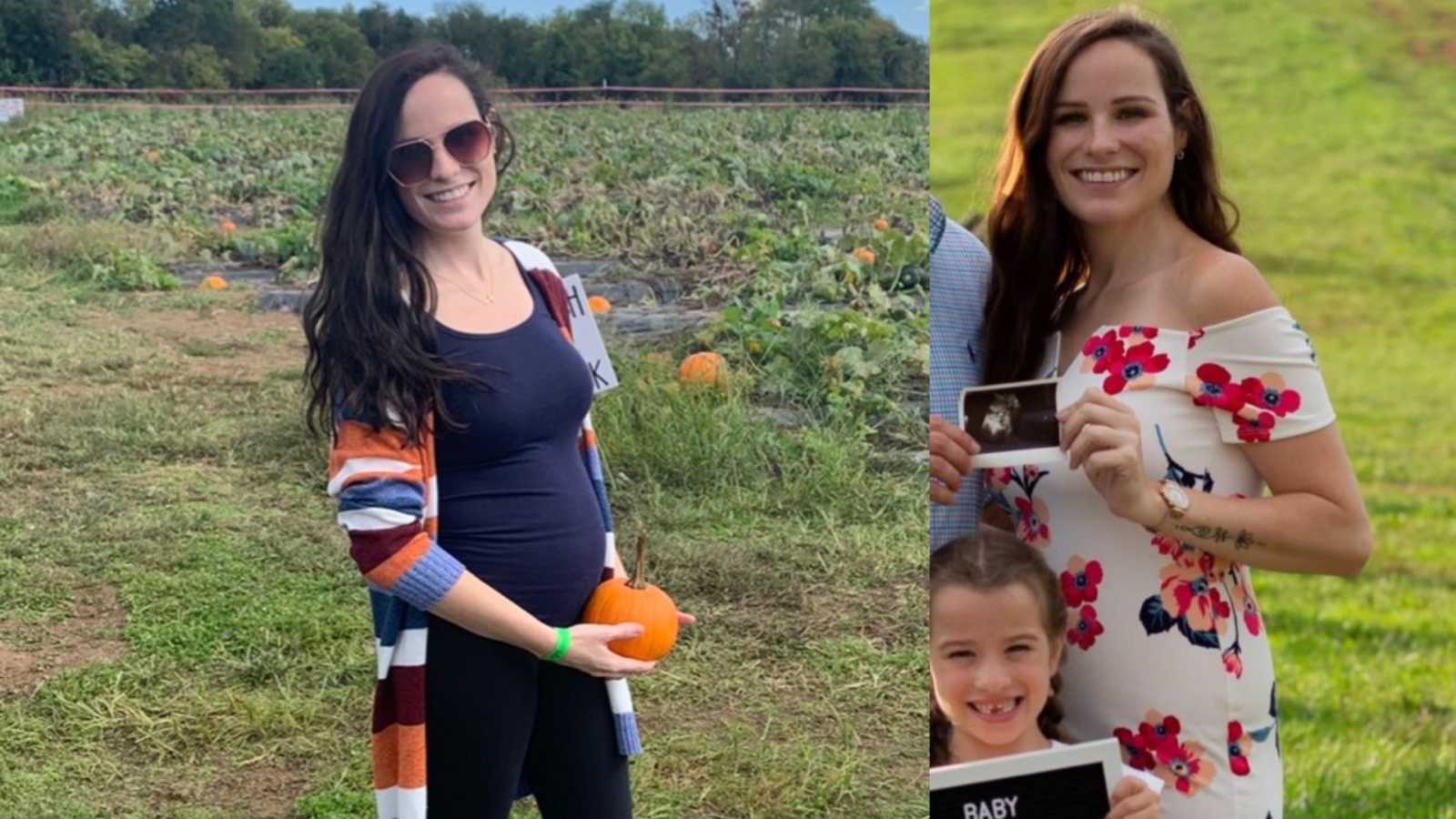 “I was 15 weeks pregnant when he abandoned us. My pregnancy had already been very debilitating on my body as I was diagnosed with hyperemesis, but none of it compared to the debilitating effects of the devastation I felt when he left us. The last morning I saw him, he hugged my daughter and I simultaneously, as if he knew he wasn’t coming back. He parted with telling my six-year-old daughter he’d see her Friday and he’d take her to the pool for more swimming lessons. Something in him this day must have finally broken, and he isolated himself from everyone.

At first I made excuses for him. Yes, I was angry, sad, and at a loss for all hope. I questioned my worth, God’s love for me, and shamefully, I admit, even my existence. Despite the unbearable pain, I felt I still had to believe he would never abandon the baby he was once so happy about—the little girl he wanted to be a father to. I just told myself it was his fear of becoming a father, of being like his own father, and I thought he’d snap out of it. Possibly, it was his fear of the life-long commitment of being a parent, knowing that feeling trapped as he did as a child made him run from nearly everything in his adult life. I soon realized no excuses could be made and this was just who he was.

I came to this realization when I found out he had abandoned his family time and time again, and then would reappear months later as if nothing had ever happened. Worst of all, I found out he had never been committed, or even faithful, in his previous marriages. The man I loved and was having a child with had a pattern of abandonment and lies which followed him his whole adult life. I slowly began to uncover lie after lie about who he truly was, and I was ashamed I gave him my heart for so long. I knew he battled trauma from his childhood he didn’t want to talk about. I cried out to God with questions. I felt forsaken; I didn’t understand why God didn’t protect me from this man.

I realize now I must have thought my love was all-powerful and I could save him from the trauma which sent him running scared so often. I had always been willing to fight for him. The difference was he wasn’t fighting, not for himself or for me. Running away and having no responsibility to anyone was a life he was content with living. As much as I still wanted to continue the fight, I had to allow reality to set in so I could begin to heal. I could not force my importance into someone’s life. I could not bring love to someone who only brought me unbearable pain. I had to realize the way I was treated mattered more than I how I felt.

After five weeks of silence, he finally showed up. To my surprise he came to an ultrasound and we found out together we were having a little boy. If I’m being honest, I felt like him not showing up would have been less disappointment than it was to sit next to an emotionless man. He had nothing to say. Nothing about his absence, how or if he planned to be a father. He didn’t ask about my daughter or me. Following this appointment he was instantly gone again, and I was left with so many unanswered questions. I didn’t think my heart could break any more, but I was wrong. I was devastated I had to share a little boy with someone I no longer thought was a good man, let alone an adequate role model. It was on this day I really took notice the man I once knew was gone. He had shut us all out: the family he had with me, his own family, and any friends we shared. He was completely empty and emotionless.

Even still, I want to see him have a relationship with his son. On occasion I still try to extend kindness and offer to include him, only to be met with the same disappointing silence again and again. The times I find myself falling apart the most are when my daughter asks questions. She had bonded with him, he was a father figure for her. He had promised no matter what he would love her and be there for her. She truly misses him, constantly asking when is he coming home. I fill my emptiness by holding her extra tight. I let her sleep in my bed at night just so I won’t feel alone. One night she told me, ‘I haven’t slept in my bed for so long, I’ll sleep in my bed again when Todd* is here.’ So many conversations with her I’ve had to force back my tears. Things as simple as her compassionate heart stating, ‘Let’s make this pizza when Todd comes home,’ devastates me.

I hid her from it for as long as I could, I made excuses for him. I couldn’t lie anymore, but I couldn’t necessarily tell her the truth. ‘Todd’s going to be gone for awhile, I’m not sure when you will see him.’ She said, ‘Aww, but we were supposed to have so much fun together!’ My heart shattered, and I had to force myself to hold back the tears I felt surfacing. Her response was so pure and so innocent. I responded, ‘I know, and he loves you so much. You’ll see him again but not right now.’ I felt like I lied to her. I didn’t know if he truly loved her anymore or if she’d ever see him again. I was hopeful she’d stop asking, but even still she asks regularly when she’ll see him. I can’t protect her from this, and it breaks my mama heart.

My emotions still rage, most days I have to forcefully tell myself I’m not broken. From the moment I realized I was going to be a single mother again I was ashamed. Let’s be honest, the stigma on single mothers is very real and very unfair. I did not want to be pitied and certainly not viewed under any stigma. I was lost on how I got here, I felt God was punishing me. I struggled to continue believing love could conquer all things. I felt the faithful love I was once dedicated to was a punishment. If I had just given up on him long ago I wouldn’t be here. I loved this man so immensely, fought for him, supported and encouraged him, and in return he left with no words.

My mind still races with so many questions. How am I going to be a single mom of two? Why me—the girl who is so committed to love and family, how did she end up alone? I’m scared, scared in ways I didn’t know existed. I do my best everyday to believe, to hope, and to have faith strength truly is found in weakness. Some days it would be so easy to hate him, but instead I choose to pray for him. I seek forgiveness in my heart for him. He’s fighting a battle I can’t understand and one he hasn’t begun to want to heal from. So often the people who hurt you the most take away so much of you, but they can’t have control over your peace unless you allow it. If I hate him he wins and I live in bitterness. Although I am scared, I seek peace in knowing God is holding me, and He isn’t going to let go. Even when my faith starts slipping, even when I fail Him, He isn’t going to let go of me. I stand on the truth that this pain does have a purpose.

I have courage God’s plan for my daughter, my unborn son, and myself is perfect. The unknown is terrifying but I’m learning fear is okay and it truly makes you stronger. Hopelessness is just a temporary emotion, and soon after it settles we start find the strength we had in us all along. I take every day one breath at a time, because for now it’s all I can do, but I am far from broken. I choose everyday to still believe love does conquer all; I choose to let my love be stronger than my anger. I search to find peace in how my life is playing out so my soul may reawaken. My family isn’t at all what I’ve prayed for. I’ve been chasing the fairy tale dream with a happy ending my whole life. It’s time to stop chasing it and see it for what it really is. It may not be the fairy tale most girls dream of, but I do have a great life in front of me. We aren’t a traditional family but even still we do make up a family—it’s different, it’s beautiful, and it’s made in Gods image.”

This story was submitted to Love What Matters by A.P. Submit your own story here, and be sure to subscribe to our free email newsletter for our best stories, and YouTube for our best videos.

‘I’m going to die young.’ I was drunk the day I took my SATs. I’d go days without eating.’: Single mom overcomes addiction, ‘I wanted to see my daughter grow up’

‘We don’t have a dad here.’ I scrambled how to respond. I was by myself, thrown head first into parenting.’: Single mom fosters 18 children, adopts son, ‘Our heartbreak is worth it’

‘Why’s there no daddy in our home?’ I couldn’t speak the truth. I never expected the question so early.’: Single mom discusses divorce with children, ‘They should make their own decisions’