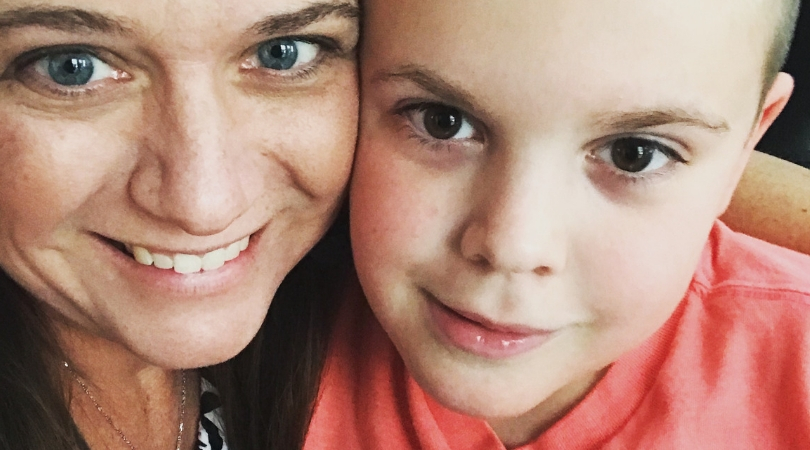 “Will he ever talk? This is the question I get asked most often about Drake.

The simple answer is, I don’t know. Along with autism, Drake also has an Apraxia of speech diagnosis. Apraxia is much more complicated than many people realize. While therapy is available, it’s still somewhat of a mystery. In short, there is no way to know for sure if the muscles of the mouth and the brain will learn to cooperate effectively. Sometimes they do, sometimes they don’t. I will say that Drake has a severe case of Apraxia. On top of that, Drake is an absolute perfectionist and doesn’t want to do much of anything unless he can do it 110%.

Drake was diagnosed with autism at 2 1/2 years old. However, I suspected something was different when he was less than 1 year old. At the time, lack of communication was the biggest red flag. The other red flags for us were: lack of eye contact, appearing deaf, no interest in toys, odd fascinations, various aversions, and appearing to be in his own world. As someone who knew very little about autism, I was most concerned about his lack of verbal communication. In the last few years, I’ve learned so much, therefore, my feelings have changed quite a bit.

While Drake was a very good baby, those signs all appeared even in early infancy. I remember the first thing I ever googled was ‘1-year-old has poor eye contact.’ The first several links that popped up were all autism related. I was terrified and kept this news to myself for several months.

If you look at the research, statistics, and listen to most healthcare professionals… most of those things will tell you that our time is running out. The window of opportunity for speech development is rather low at this point. Drake will be 7 years old in another month. According to ‘science’ the likelihood of him ever being able to communicate is almost at zero. But you see, I don’t rely much on what ‘they’ say. I choose to hold onto hope. I’m one of those, ‘your will be done, Lord.’ On the flip side, I’m not in denial about it either. He may never be able to verbally communicate, and I can say with confidence I’m okay with that.

Maybe I’m crazy, but it just isn’t at the top of my list of priorities anymore. You see, even if Drake does find his voice, he will always struggle with verbal communication. At this point of the journey, I have given him as many tools and ways to communicate that I possibly can. He has always been persistent when it comes to getting what he wants. He may lead by hand, he points (that didn’t come until about a year ago), he knows a few basic signs, and he has an AAC communication device. All these things help him to communicate his needs. Sure, none of these things are as ‘easy’ as verbal communication, but it sure makes it easier for him. Plus, in this age of technology, he will one day be able to type/text, etc. I’m content with that.

Do I wish I could hear him say ‘mama?’ Of course I do, and I have a couple of times. Drake has spoken several words randomly over the course of the last few years. Mama, Daddy, iPad, Hug, No, Yeah, Yum, and more. The words are all there. In fact, his receptive language is literally astounding. He has always been a listener and a thinker… I think it would be scary if we actually knew all that he has to say. The thing is, he will be able to tell me one day. It may not be verbally, but because of technology…one day he will be able to tell me whatever he wants. It’s exciting to think about it.

In many ways, I’ve learned that verbal communication is overrated. Drake has taught me so much on this journey, but the number one thing is to listen with more than your ears. He has taught me to be more observant, more patient, and shown me a level of love I didn’t know existed.

When I tell him I love him, many times he will put his face next to mine and nuzzle. If I ask him if he loves me too, he will reply with a nod and sign, ‘mama.’ Ya’ll, it gets me every time. I don’t need to hear the sound of his voice to know he loves me… I can feel it.

My hopes and dreams for Drake are so far beyond verbal communication. What I want more than anything is for him to be happy, gain independence, and continue to be confident in who he is. None of those things require him being able to verbally communicate. I’m not giving up hope he may one day find his voice, but I’m also not going to despair if he doesn’t. One of my goals in this parenting gig is to make sure this kid knows he is amazing, loved, and capable of anything. I never want him to think he has failed or isn’t good enough because he can’t verbally communicate.

So when someone says, ‘do you think he will ever talk,’ they may hear a sigh from me…especially if he is in the same room. I understand their concern, but I am also frustrated because being able to blab out a bunch of words doesn’t make you a more complete human being. I wish people would look at Drake and see more than a deficit. I wish they understood he is smart, funny, happy, and content being who he is. To me, those things are far more important than words coming out of a mouth.

Will he ever talk? Only God knows that for sure. My job is to love him and encourage what he CAN do and leave the rest to the one who does.”

This story was submitted to Love What Matters by Jill Powell of North Carolina. She chronicles her son’s journey with autism on her Facebook page and blog, Walking With Drake. Submit your story here, and subscribe to our best stories in our free newsletter here.

Do you know someone who could benefit from this story? Please SHARE on Facebook to let know a community of support is available.