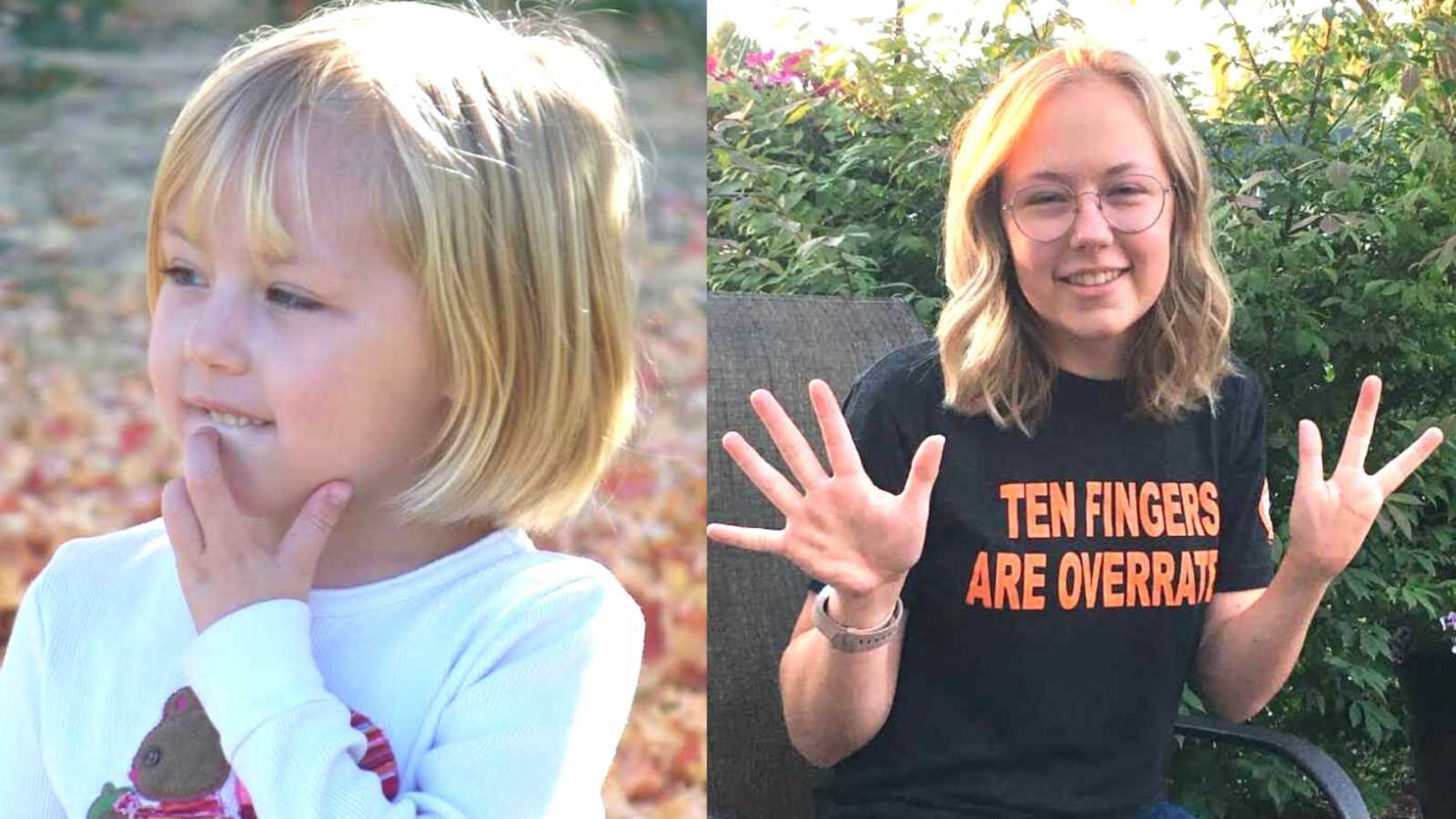 “My limb difference affects my left hand. I have three fingers (my thumb, middle, and index finger), a shortened palm, a smaller wrist, and I’m missing some bones and muscles. Because of this, I have a limited mobility in my wrist and constant pain, which usually gets worse when I move which… is a pain. I wear a wrist brace frequently.

Growing up, I went through phases of loving my hand and wishing I was the same as everyone else. As a kid, it’s hard to be different. It’s not as hard when you’re an adult but kids don’t really have ‘filters,’ while adults usually do, so I heard and experienced some hurtful and weird things.

One time, I was in a class and another student noticed my hand and continually tried to grab it and feel it. Then he told the whole class about it, which was super awkward. Another experience I’ve had, that involved an adult, was when I was about 10 and my class had gone on a field trip to a botanical center. One of the presenters was giving a presentation when she suddenly started bringing up how all humans have ‘two legs, two arms, and 10 fingers.’ After she said that, the entire class of 10-year-olds turned to look at me to see what I would do. I just stared straight ahead at the instructor, who suddenly became very uncomfortable and said, ‘Well I guess not everyone has the same things.’

Luckily I was never really bullied for my hand but I did hear some comments from my peers that were annoying and painful. For example, being told you look like a t-rex or an alien doesn’t really boost your self-esteem, and I heard that a lot when I was younger.

What also made things difficult was the need to adapt things, which was sometimes hard. When my class started learning how to type, the teacher basically told me that she could try to help me but I would need to figure it out on my own. It was very hard and super annoying but I was able to learn how to type my own way. I started playing softball, which was an interesting sport for me to choose. Because of my limited mobility, I couldn’t catch like everyone else, my hand didn’t fit the mitt, and I was dealing with a lot of wrist pain. But I was able to adapt everything and softball ended up really helping me. Not only did I find a passion and now one of my favorite hobbies but it helped me work on my mobility. Like I said before, my mobility in that wrist was limited so I couldn’t hold my glove up and turn it to catch pop flies. I couldn’t catch balls coming directly at me without stepping away from the ball and turning my glove to catch it sideways.

I would warn every coach before a new season of my limb difference (which was really awkward and uncomfortable until I had one coach who was missing part of a finger and literally made me feel so comfortable and confident about myself). Usually, the coaches wouldn’t get at me about catching correctly but one of my coaches did. He flat out told me he wasn’t going to take any excuses and I was going to need to learn how to catch like everyone else. At the time, I was SUPER bothered by this. I was the one with the limb difference, and I knew what I could do with my hand. He forced me to push myself and it taught me that I shouldn’t give up so easily on things. I can do much more than I think I can. That is a lesson I will always remember. What he did worked. My mobility drastically improved and has stayed improved. I’m so grateful for that push because it really helped me.

As I grew up and began to be more confident with my difference, things began to bother me less. People’s words didn’t hurt and the stares directed at me didn’t bother me as much. What did bother me was the fact no one I knew looked like me. In fact, I had never seen ANYONE with the same hand as mine. I felt alone because, in a sense, I was. I remember sitting in my room on my bed searching up different variations of ‘three-fingered hand’ into google to see if I could find someone out there like me. It never really worked, which was hard. I ended up finding an organization called the Lucky Fin Project. I cannot even describe how amazing that feeling was when I learned there was a community for me and it was so big. I was so excited I cried! After going my whole life feeling like I was completely alone, finding this amazing community was just incredible.

A few months later, I decided to create an Instagram account to help raise awareness for limb differences. My initial idea was to just post photos with my hand in it to show that difference is beautiful but I wasn’t that great of a photographer. I decided to just write about what it’s like to have a limb difference. It turned out to be a lot harder, and scarier than I thought it would be because I needed to be transparent and open about stuff I dealt with. I’ve had several knee surgeries throughout my childhood and I’ve had to rely on other people a lot because of it. Thus, independence is an important thing for me to have. I don’t love people feeling like they are obligated to help me. I tried to keep the things I was dealing with to myself. So having an Instagram where I told people (especially people I didn’t know) how I feel or what I deal with was hard. But it was SO worth it. I have received so many messages from people asking me questions so they can help their children whose hands are like mine (which I LOVE doing). Through doing this, I also found a Facebook page for people with the exact same hand as mine, which was literally like a dream come true!

By sharing my excitement about this, I hope I don’t make anyone feel like they should do exactly what I did and they will be confident in themselves because it won’t. That’s a process and something that needs to be constantly worked on. Make sure to give yourself a break when you don’t feel good about yourself. That’s totally okay. I still feel that frequently. It’s completely normal and okay. I know I feel that when my wrist is particularly sore or when I’ve noticed someone’s stares. It’s really hard and I just want to be ‘normal.’ I can’t be ‘normal like everyone else,’ but I can accept my kind of normal and keep living.”

This story was submitted to Love What Matters by Savannah from Kaysville, Utah. You can follow their journey on Instagram. Do you have a similar experience? We’d like to hear your important journey. Submit your own story here. Be sure to subscribe to our free email newsletter for our best stories, and YouTube for our best videos.