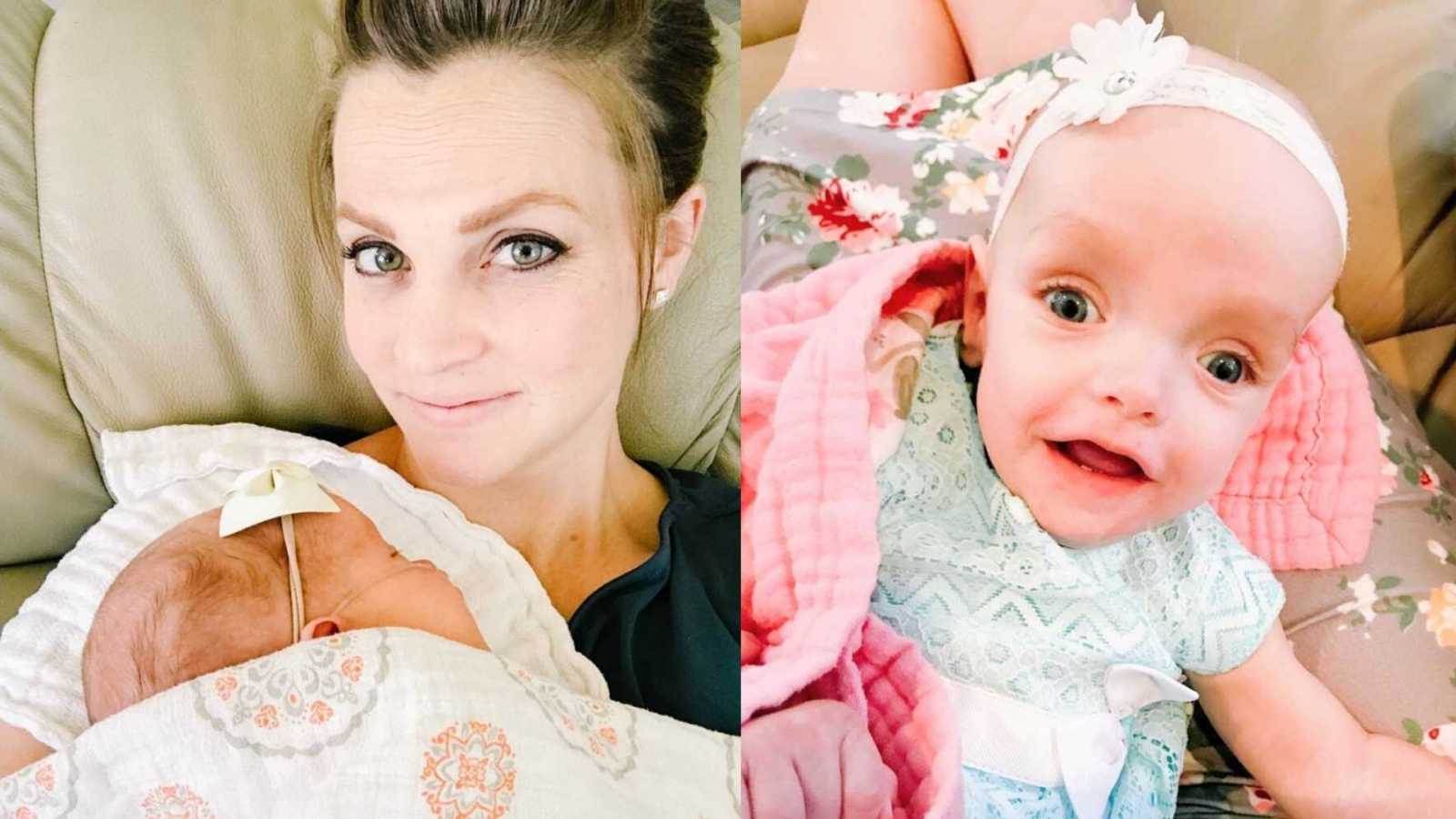 “What is ‘normal’? That is a question I’d never have asked myself if not for Oaklyn.

I’d had an uneventful pregnancy so far (aside from my typical all pregnancy sickness and extreme fatigue), and in pregnancy, uneventful is usually good, and means all is going well. I was 32 weeks when my husband and I went in for an elective 3D ultrasound to see our sweet Oaklyn’s little face, which we did. She was perfect.

A few days later, at a routine checkup, I sat in the exam room waiting to see my doctor, expecting to be in and out in 5 minutes flat. I heard her in the hall (I’m sure she was unaware I could hear her), talking about the ‘awful day’ she was having and all the ‘rough news’ she was having to break to families. ‘Can my day just be done?,’ I heard her say. I was excited to tell her that I’d keep our appointment simple for her. When she entered the room, everything changed.

At our 3D ultrasound, the tech by chance noticed Oaklyn had a brain condition, Ventriculomegaly; or increased size ventricles in the brain. I had never heard of this before, let alone know how to pronounce it. She went on to describe it, and that there is ‘no telling what this condition means for one baby to the next,’ and it was a ‘wait and see.’ She then said a word that took me by surprise, and scared me: ‘Abort.’ For me, that would never be an option, but what it implied was that this was something to fear. Something negative. Something that could really endanger my child’s life. I was confused at what this diagnosis was, and I was scared for my baby’s health. I was referred to Maternal Fetal Medicine to take care of Oaklyn and me until delivery, and I walked out of the office in a haze.

I wanted to avoid any more doom and gloom, and mostly avoided google searches that would bring just that. I wanted to find real people, with real stories, and I did find those people in a Facebook group! They gave so much hope, joy and excitement to meet my special baby!

MFM continued to closely monitor Oaklyn for the next few weeks and we scheduled an induction at 39 weeks, because of her increased head size. We wanted to be sure her birth went well… and it did. She was so strong and so brave, and we had an amazing team helping Oaklyn and I through the birth process.

Oaklyn spent the next 2 weeks in the NICU where she went through dozens of tests, an MRI, ultrasounds, and endured countless examinations. All in the attempts of gathering any puzzle piece we could to try and determine the cause of her Ventriculomegaly. In all the testing, they found her to have a few more brain conditions, a few brain injuries, and lower brain mass than is typical, as well as mild hearing loss, and some other conditions that were unique to her… but still no cause, or main diagnosis.

She remained there until she learned how to eat, and in this process, we learned that Oaklyn learning things was going to be a challenge for her. Oaklyn becomes overwhelmed and overstimulated very easily. She could learn parts of a function (like learning how to suck, or how to swallow), but could not piece the many parts of a function together. She would also get overwhelmed, and exhausted very quickly, and we would often lose our chance at teaching due to her becoming overstimulated by the simplest things, like me moving my arm the slightest bit. We worked hard and learned about how she learned, and how she functioned, and we eventually got her eating on her own, and was healthy enough to go home on oxygen, which she remained on for 2 months.

The next year was filled with doctors appointments and therapy; it wasn’t often we’d go an entire week without a single appointment. Oaklyn has 5 different specialists, and an in-home therapist. We also went through a horrific two-week trial of waiting to find out if Oaklyn had a terminal syndrome that would take her before she was one. This diagnosis, more than any other possibility before, just made sense. Thank goodness, her tests came back normal!

She was also diagnosed with an eye condition that required two double eye surgeries in her first year of life. One of which she contracted pneumonia after, and recovered from surgery and pneumonia simultaneously. And in true Oaklyn fashion, did so beautifully.

When Oaklyn was 8 months old, she went in for an MRI. A couple days later, her Neurologist called me and said the words, ‘I had to double check that I was actually looking at the same baby!’ Oaklyn had some brain injuries heal that weren’t expected to, she had one diagnosis removed, and had grown a great amount of brain tissue she didn’t have before. She had a much healthier brain, and her Neurologist was amazed!

This year has been one of the hardest years of my life, but also one of the fullest years. Never have I been a witness to more miracles, and more blessings than I have been this year because of Oaklyn.

Oaklyn is not your ‘normal,’ or as we like to call it, typical baby. She does things in her own way, and at her own pace. Her development was steadily delayed 2-3 months for the first 8 months of her life, but this girl has never ceased to be a fighter! Even through two eye surgeries, pneumonia, and other trials, she keeps the sweetest spirit and smile, that is absolutely contagious. From 8-12 months, this girl proved to us, for the 1,000th time, as she had done 999 times before since she was born, that she has no limits. That nothing is holding her back. That she is precious. That she is a fighter. That she is extraordinary. That her conditions are not something to fear. That she is exactly who she is suppose to be. That her conditions are what make her, her, and she will move mountains.

In those 4 months, not only did she make up for her delayed development, but became advanced developmentally in many areas! Watching her learn, develop, and grow at such an increased speed has been nothing short of miraculous. Not only to me, but to all the medical professionals who’s care she is in.

The lessons I have learned from my baby girl are countless. She has taught me to persevere. To be brave. That you are stronger than you think you are. To have faith, and trust in God more fully. To fight harder when you feel like giving up. To share the light that is so uniquely, and divinely yours. She has taught me to love more deeply, because of the full love she gives.

Never have I looked at Oaklyn and thought there was anything ‘wrong’ with her, or that there should ever be any sorrow surrounding her conditions. Do I wish I could take away the trials she has to go through, and the pain she has had to endure? Of course! It has been heart wrenching since day one knowing she would have to endure so much more than most. However, without a doubt, I know Oaklyn is exactly who she is suppose to be. This is what makes Oaklyn, Oaklyn.

So, what is normal? Throughout Oaklyn’s life, I have heard, ‘what a ‘normal’ baby would do…’, or ‘what we would ‘normally’ see…’ is Oaklyn normal? Abnormal? I don’t know. That part doesn’t matter to me. What I do know is this:

And it is normal for her to make me feel like the luckiest mama, because she is mine.”

This story was submitted to Love What Matters by Aubrey Williams of Salt Lake City, Utah. You can follow her journey on Instagram. Do you have a similar experience? We’d like to hear your important journey. Submit your own story here, and be sure to subscribe to our free email newsletter for our best stories.

‘I need to tell you something.’ He teared up. ‘How do we fix it?’ I took my sweet little girl to the car, and buckled her in. ‘There’s nothing wrong with you. You’re perfect!’