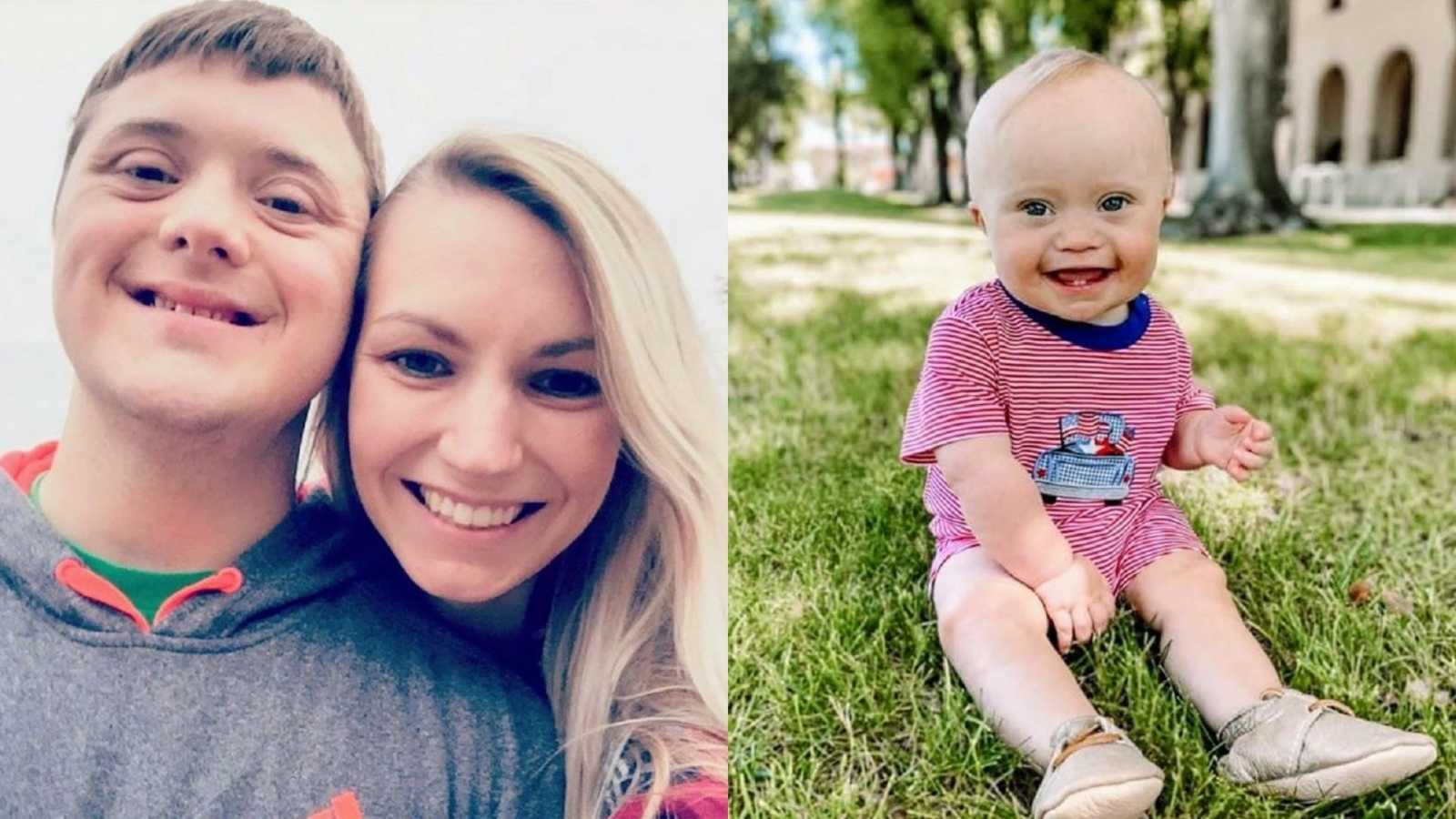 “My husband and I met in our early twenties. I was a nursing student in Nashville, TN, and he was in the military stationed in Oklahoma at the time. We dated long-distance for three years until I finished school and moved out to where he was stationed. At the beginning of our relationship, he made it very clear that acceptance of his younger brother Isaac, who has Down Syndrome, was non-negotiable. Anyone who he decided to date or marry would have to be all in and compassionate towards his younger brother.

Like everyone else Isaac meets, I was instantly drawn toward his funny and happy personality; not to mention how extremely popular Isaac is in our hometown. Isaac was nominated homecoming king in high school, has been asked by typical girls to three proms, and our family cannot go out to dinner without seeing at least one person he knows. He can just walk into a room, and his light shines so brightly. While I was in college, I spent spare time watching Isaac while his parents worked, and I even picked him up from school. My husband and I attended every Special Olympics competition and cheered him on as he walked across the stage to graduate from high school. We both have so much pride for him and how well he is doing.

Fast forward to almost ten years later, my husband and I had a beautiful daughter and found out we were pregnant with our second child. We decided to do the Non-Invasive Prenatal Testing (NIPT) again for this pregnancy. We did the exact same test with my daughter, and honestly, it was only because we wanted to find out her gender early. My doctor even tried to steer me away from doing this test because I wasn’t considered ‘high risk.’

The phone call came early afternoon. My daughter was down for her nap, and I was so tired I decided to lay down as well. I felt the phone vibrating on the bed and contemplated whether to ignore it. I decided to look and see the number calling and realized it was my OB office. I sat straight up out of bed because I knew our NIPT testing had come back, and that meant our gender results were in.

I should have immediately known something was wrong because it was the doctor calling with the results. When I received my daughter’s test results, it was a nurse who was able to relay that information to me. The phone conversation was a blur and the doctor said something along the lines of, ‘I’m sorry, but your testing has come back positive for Trisomy 21. We would like to schedule a follow-up ultrasound for you.’ Excuse me? What? My husband’s younger brother has the spontaneous type of Down Syndrome. It doesn’t run in our family. Is this really happening twice? I’m so young. I’m not even supposed to be at risk for this.

The unexpected was happening, at 28 years old, the geneticist told me my chances were 1:1000 of having a child with Down Syndrome. I never really knew parents felt so many emotions when their child received a Down Syndrome diagnosis. When I told my mother-in-law this statement, she asked me what did I think they felt? Honestly, I had no clue and no response for her. It was a thought that had never crossed my mind before.

There was so much pain during the first few weeks after finding out and the baby growing inside of me felt so distant. My husband became the glue that held me together during those first few weeks. Don’t get me wrong, he had his dreams which looked a little different, and he felt those losses too. But he knew… he knew how much love we would have to give our son. He continued to remind me of this love even when I was full of doubt and fear. He gave me hope, reassurance, and glimpses of the love he saw growing up as a child. I’ll never forget how he carried me through that difficult season with understanding and without judgment.

Expectations are a funny thing. Some expectations we are consciously aware of, others hide deep in our hearts, and we don’t even know they are there until they get taken from us. We expected a child with 46 chromosomes. Having a child with 47 was not in our plan. My heart was a beautiful garden, full of plants blooming on the surface and unaware of what had been growing underneath. Obtaining our son’s diagnosis was like God coming through that garden and pulling out all the weeds hiding under those beautiful plants, leaving me to adjust my eyes to a new kind of beauty, and taking away my plans in preparation for His own.

After Emmett was born, I knew I wanted to share our story and help others who were going through the emotions of having a prenatal diagnosis. We knew all the things Emmett would be capable of because of Isaac, and we had so much hope because of him. There are so many other families who do not know anyone or anything about Down Syndrome and are usually only told about the negative parts.

When Emmett was only six months old, we decided to move forward in launching a Nonprofit called Love that Surpasses. Neither my husband nor I have a background in business, but I was determined to get this Nonprofit off the ground. I spent the next six months researching and putting together all the pieces during any downtime that became available. Love That Surpasses was officially launched on March 21, 2020. Our Nonprofit sells shirts that promote the value and worth of children with special needs. The proceeds go towards creating Bags of Hope for mothers who get prenatal diagnoses.

Since launching our nonprofit on World Down Syndrome Day, we have been able to send Bags of Hope to prenatally diagnosed mothers in sixteen different states. The story behind our name originates from Ephesians 3:17-19, which states just how abundant God’s love is for all of us. People who have special needs are often viewed and described as less, broken, and defective by worldly standards. We spread awareness about how we can fully rest in knowing how valued, loved, and worthy we all are in His love that surpasses knowledge.

‘And I pray that you, being rooted and established in love, may have power, together with all the Lord’s holy people, to grasp how wide and long and high and deep is the love of Christ, and to know this love that surpasses knowledge.’ Ephesians 3:17-19″

This story was submitted to Love What Matters by Sarah Lowry of Love that Surpasses. If you or someone you know has a prenatal diagnosis of Down Syndrome and want to request one of their Bags of Hope or you would like to find out more information on how to donate to their Nonprofit, you can email them at lovethatsurpasses@gmail.com. You can follow her journey on Instagram and her blog. Submit your own story here and be sure to subscribe to our free email newsletter for our best stories, and YouTube for our best videos.

‘Who is this stranger they placed on me? This is absolutely NOT my son.’ I couldn’t look at my husband.’: Mom to son with Down syndrome says ‘I have been so beautifully humbled’

‘He’s totally fine.’ I knew something was up. I deleted photos of him. It’s seen as a ‘curse from God.’: Baby diagnosed with Down syndrome months after birth, ‘He is so loved’

‘I don’t know how to tell you.’ He looked fearfully at her twin. My body turned into a science experiment.’: Preemie twin diagnosed with Down syndrome, ‘We truly are the lucky few’