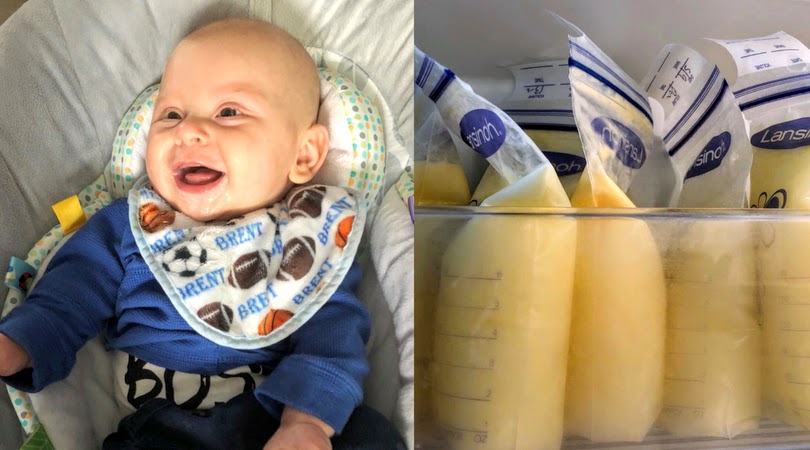 “Last week my husband and I took our 5-year-old, 4-year-old and 2-year-old to Disney. Our four-month-old baby, Brent, was home with grandma because we all know Disney at four months isn’t magical for anyone.

While we were away, first thing in the morning, in the baby care center at Magic Kingdom (which is remarkably comfortable and so nice!), and as soon as we would get back from whatever adventure the day took us on, I was pumping. Standing in the bathroom or sitting on the floor next to the bed, I was stockpiling milk and keeping up my supply. So when we left on Sunday morning, I delicately packed up my roughly 100 ounces of milk in the black travel lunch bag I brought for the occasion, stuffed it with ice and went on my way. I securely wedged the milk under the seat in front of me on the plane, careful about it not to tip over and make a giant mess. Unfortunately for me, we had an embarrassing number of carry-on bags, our three kids, and I left the milk in its safe little spot when I got off the plane.

Fast forward about an hour, I was in my kitchen alone with my husband, beginning to unpack and exclaimed, ‘I have to put the breast milk in the fridge!’ I could not believe I had forgotten to put it away! And in that same moment, I realized what I absolutely could not believe — I had left it on the plane. I am generally on the stoic side, but between Disney exhaustion and the onset of intense frustration at myself, I started to cry. My husband, at a loss seeing me in tears, told me it was not a big deal (even though we both knew it was!) and we moved on with what was supposed to be a happy Mother’s Day. My girlfriends suggested I contact United lost and found, but when I started looking into the process, I decided there was little hope for Brent’s Disney souvenir.

Later in the evening, as I was putting the last of the four little ones to bed, my husband looked up from his computer and casually mentions, ‘I think they found your breast milk. Let me send you this text I just got.’ Shocked, I read the first, of now many, texts from Jeff Nowotny, a United flight attendant who came on board our aircraft after we deplaned. I got on the phone with Jeff and found out that the impossible was possible. He had rescued my milk!’

‘Don’t worry! I have been keeping it on ice all afternoon!’ I could not believe my ears. Not only had he found it, but as he spoke for a minute straight, I was overwhelmed to hear how much he cared about its worth. I was a perfect stranger. Not even a passenger he had met on board. Towards the end of his synopsis of how he had been tending to my bag o’ milk, he told me he was still in Miami, but would be flying back to Newark shortly, due to land around 11:30pm. He asked if I wanted to meet him at the airport, but frankly, I was not sure how going to Newark Airport at midnight was going to play out. Not an instant passed, before he offered to drop the milk at our house!! ‘It’s Mother’s Day and I know how important this stuff is. Don’t even worry about it.’ He was more worried about waking me at a late hour dropping the milk than he was about going out of his way after a long day.

I was flabbergasted. I still am. I left him a little gift outside my front door with a note thanking him and told him I wanted his last name so I could make sure United knew the above and beyond service he was providing. Being the person he is, when he dropped the bag, he left ME a thank you note! And told me where I could leave feedback for United but reminding me that it really was not necessary and that he was just happy to help.

The next morning, after I unwrapped my milk surrounded in nearly 10 pounds of ice, I told my husband we needed to make sure everyone at United was made aware of his grand gesture. This was not just customer service, this was the act of a selfless extraordinary human being. Lucky for me, my husband owns nuts.com, which is sold on United flights, and he was able to quickly let the right people at United know what had happened. I should have taken a picture of exactly what he left, but here are the goods now.

I also added Jeff as a friend on Facebook, so I could tag him and let all of my friends and his friends know in a public way, how grateful I was for his compassion, concern and effort.

To Jeffrey Nowotny, the United flight attendant who has yet to meet me, but found my bag full of breast milk on a plane…

A few days have now passed, and I am so happy to know that thousands of people have learned of his kindness. Assuredly, Jeff’s friends already knew. And lucky for me, I can now call him a friend of mine. We still have yet to meet, but have been speaking regularly and as he told me yesterday, it feels like family.”

This story was submitted to Love What Matters by Rachel Cohn Braverman, of New York, New York. You can follow her journey on Instagram and Facebook. Submit your own story here, and be sure to subscribe to our free email newsletter for our best stories and YouTube for our best videos.

‘Lonnie said, ‘This is all for you.’ Now any time he sees a truck, he tells me about his buddy, Lonnie.’: Neighborhood in tears after recycling worker’s act of kindness for little boy