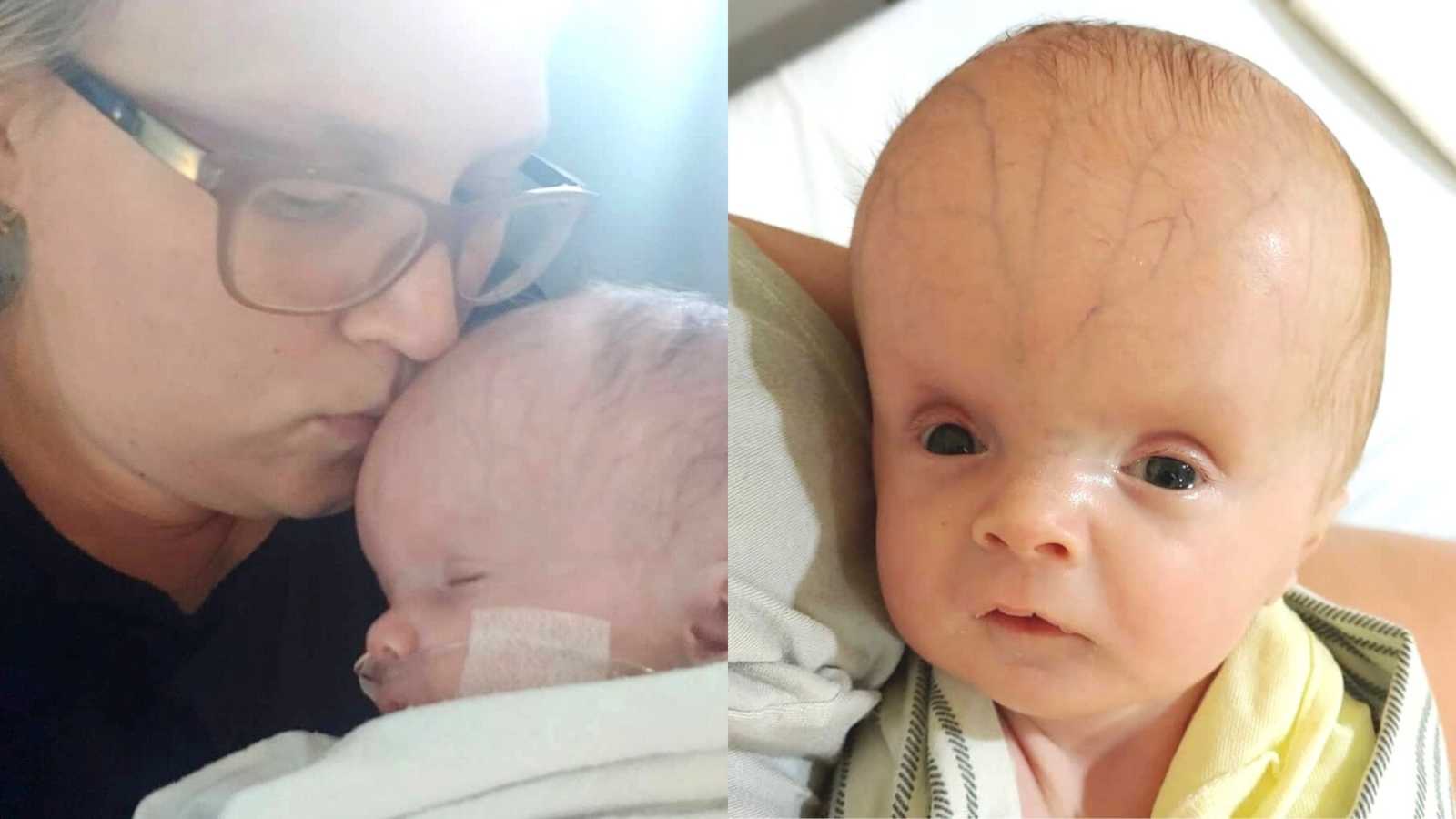 “Hearing the words, ‘It’s a boy but he has severe hydrocephalus and will have severe disabilities’ is something no parent wants to hear. My husband and I went to our 20-week scan with the maternal-fetal specialist, and the doctor gave us a vague and negative diagnosis. She listed several ways our son would not thrive. In our minds, she left us feeling like he would not be able to do anything.

Each appointment, we were given no hope but reminded about the severity of his hydrocephalus. It was devastating! Every day was filled with tears and anxiety about the unknown. Our needs and questions were not being addressed by our specialist, which led us to question our quality of care. Later in the pregnancy, we decided to end our visits with the specialist and continue our care with Dr. Carter, my obstetrician. We trusted God’s plan for our family and prayed for guidance on how to proceed throughout the pregnancy. After many conversations with Dr. Carter, we decided it was time for Henry to make his appearance. Dr. Carter considered my well-being just as much as he did for Henry, and we did not want to wait any longer.

On July 17, 2019, Henry Wallace was born at 34 weeks. His delivery started as a planned c-section, with the best doctor and care team, but turned into a few moments filled with fear. Before the surgery, we knew Henry was a breech baby, but we did not know his head was stuck in my ribs. While laying on the table, I remember Dr. Carter urging the words, ‘We have to cut more’ and ‘pull harder,’ as I felt them pulling. The pain was excruciating as my spinal block wore off not once but twice because they were struggling to deliver Henry. If it was not for my amazing doctor, who decided to take Henry early and performed the surgery with so much care, I believe Henry and I would not be here today.

Many of the doctors were surprised to witness Henry breathing on his own. The NICU team performed their assessments and then rolled Henry down the hall for our family to see. At two days old, he was transferred to the children’s hospital for brain surgery. The neurosurgeon performed a surgical procedure called an endoscopic third ventriculostomy (ETV) to create an opening in the third ventricle of Henry’s brain. During his two week stay, he thrived and did better than any doctor expected. We were thrilled! Our fears were beginning to subside, and we were feeling hopeful about Henry’s future.

Our road came to a halt soon after. We settled in at home and were back in the hospital for another brain surgery and mysterious complications. The ETV did not allow enough cerebral spinal fluid to drain, and Henry needed further intervention. The worry and fear began to creep back into our lives. Just shy of a month old, Henry had his second brain surgery. A VP shunt was placed to help drain the cerebral spinal fluid from his brain. The surgery went well, but Henry struggled with the intubation and did not wake up for several days. We became extremely concerned. We begged the doctors for answers. Several different specialists evaluated Henry to try and find the reason why he would not wake up and what was causing him to have strange breathing episodes. The only diagnosis to evolve was central and obstructive apnea.

Henry was sent home with oxygen and a feeding tube. We felt defeated because we left the hospital with more concerns and medical equipment than ever before. Life was a rollercoaster, and his list of admissions was not complete. Henry has had three more hospital stays because of rhinovirus, which is known to be the common cold and another brain surgery. After many repeat admissions, we decided to seek genetic testing because Henry’s case was complicated. The doctors wanted to put more pieces of his puzzle together. This is when we found L1 Syndrome, which is 1 in 30,000.

A little side note about my family: my brother, Jay, is also medically complex. He is 32 years old. After completing the genetic screening, we were able to get answers for his genetic background as well. Hearing your child has a genetic syndrome that affects the nervous system is difficult, but it was also a relief to have answers for Henry and Jay.

With several admissions and brain surgeries, Henry is thriving today! He is a fighter, and he has shown the world anything is possible! His first birthday is a huge milestone for our family! We will celebrate everything he has been through and all he has accomplished. We wish we could show the specialist how far Henry has come. He may not be doing typical twelve-month-old skills, but he is hitting goals people didn’t think were possible.

Henry loves yogurt and oatmeal. His best friend is his sister, Alice, and he will search for her when she is nearby. If you want to see him smile, have his sister talk to him, play ride the horsey, or take him swimming. He loves the pool! If you are talking to someone, be prepared for Henry to coo because he wants to be a part of the conversation. One of his favorite places is his activity mat. He plays with his red toys that hang down from above. He tends to love the color red. Musical light-up toys are another favorite! He will kick and move his arms to activate all the lights and sounds.

Oh, let me tell you about his laugh because it’s the best! He spreads happiness and he brings so much joy to our family! These great qualities are just a glimpse into Henry’s life. He is moving mountains and making an impact on so many lives along the way. We will continue to focus on the good and take deep breaths during the bad.

Henry’s story is a testimony to share with the world. I hope his story can give light into the medically complex lifestyle and show the doubters a different perspective. Overall, our family wants to remind everyone some of your most difficult days will turn to joy, so make sure you show off your greatness!”

This story was submitted to Love What Matters by Megan. You can follow their journey on Instagram. Do you have a similar experience? We’d like to hear your important journey. Submit your own story here. Be sure to subscribe to our free email newsletter for our best stories, and YouTube for our best videos.

‘Will she have brain issues?’ The doctor held my hand and said, ‘I don’t know.’ I’ve never been so scared.’: Woman births baby with Spina bifida, Hydrocephalus, ‘We’ve been through so much’

‘We’ll operate to decrease her brain damage. Nevermind. BMI is too high.’ I was too fat to save my baby.’: Mom births baby with ‘severe’ Spina Bifida, says she is ‘not disabled, just does things in her own way’

‘Something is wrong with her brain…’ I was wailing, screaming. ‘What does that mean?!’: Mom births rainbow baby with Spina Bifida after 3 pregnancy losses, ‘She is a twice-born miracle!’