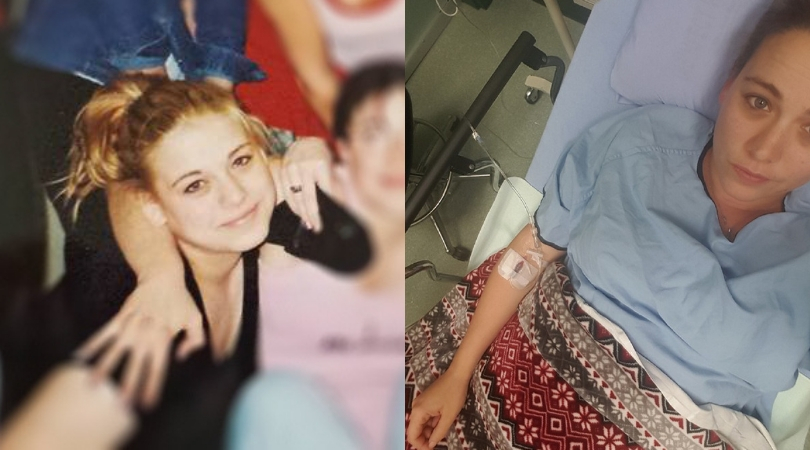 “Even before life began I didn’t have the best chance of survival. I was conceived by two reckless, ill prepared, teenagers in the 80’s being instructed to ‘consider all of their options.’ When I was born, my visiting grandfather, not a doctor, was the first to notice I was, in fact, turning blue and had to be rushed to the NICU.

When I was 3 I would contract salmonella poisoning so bad the doctors would phone my mother in the middle of the night to come say her goodbyes as it did not look like I would make it until morning. In my school years I would suffer more serious concussions than a professional hockey player. One of those concussions would land me with life altering brain damage that causes me to experience intense nausea or vomiting every day of my life from the second I open my eyes in the morning.

When I was 15, I would succumb to numerous amounts of stresses, triggers, and bullying. I would survive my mental health incident of swallowing over 150 pills.

I hold no shame in that, but I do hold a deep sadness for my family, friends and future/current self. Most days I don’t even think about it anymore, but on the days where I need to be honest and acknowledge my past, like while writing a story about how I have survived life, it saddens me that it needs to be included. Mostly because right after my teens, in my mid 20s, I would fight for my life with all I had.

In April of 2013, shortly after the passing of my godmother, I fell ill. At first I tried to excuse it with my gastroparesis (reason for my nausea). Than I went to the emergency room and the doctors told me I had the flu. Two days later I was experiencing a deep chest pain and went in again. After 8 hours, the doctors in the small emergency room phoned an ambulance and rushed me to the new hospital in the city of Calgary. It was on the way there that a paramedic would discover my heart was being affected by whatever was attacking my body.

On arrival to the hospital, tests would reveal pneumonia in my lung due to aspiration, rubbing against my heart, which was swollen on the inside and outside. I was suffering from epicarditis as well as pericarditis. I had an uncontrollable fever and my blood pressure was an unstable 78/45. What gets me the most is my vivid recollection of most of the events that happened 5 years ago, even with my body under all that stress. It was almost like I became hyper aware of my surroundings.

My friends and loved ones came dressed in isolation gear from head to toe to visit me. All I could see was their eyes, but I was grateful for each and every one of them. One friend sent me flowers. I wrote a letter to another, one I never sent, telling them how much I truly loved them. I remember asking the doctor when I could go home and them telling me that they were doing ‘the best they could.’ The defeat written on his face was undeniable. I can still feel the smile disappearing from my face after witnessing his somber response to my hopeful request. I made a joke to a cardiologist how I felt like I was on an episode of House. He nodded with a sad sincerity and said,  ‘You’re the closest thing to an episode of House we’ve seen, that’s for sure.’ Another nurse stayed more than two hours past her shift ending to go into depth, whiteboard and all, about what was happening to me and what it meant. They knew it was attacking my entire body. But they also knew it was a virus. Which meant it had to run it’s course, and the course didn’t look hopeful.

I remember texting my mom in the middle of the night asking her if I was going to be okay and telling her I was scared. Her response was makeup on fear. As her daughter, I could see right through it. I knew my mom enough to know if I was going to be okay, she would have told me I needed to get some sleep, and maybe stop being so dramatic. This time, my mom told me I was in the best hands. My mom can hide most of her emotions – except fear and sadness.

For the first time since getting to the hospital, I grabbed my hospital pole and weakly shuffled my way around my ward, in despair, feeling completely sorry for myself, and plummeting to a new level of hopelessness. Bored with looking at my feet I slowly raised my gaze to experience what I can only describe as an epiphany.

The floor was filled with glass rooms. We were all under 24 hour observation due to the seriousness of our illnesses. At night, all the curtains were open and without trying to look too deeply into any of the rooms, I did notice something almost automatically. All of these rooms looked the same. They had one person lying in a bed, and nothing else. In comparison to my room, which was filled with 150 tea bags, 4 kinds of Jell-O, three kinds of broth, a blow up balloon hand, my personal blanket and pillow brought from home, my own gown and comfy clothes so I didn’t have to wear all hospital gear. I was humbled to tears. I shuffled my way back to my room, opened up my pencil crayons and started drawing the worst bees, fishing poles and blue skies on folded pieces of paper. With permission, I included an individually wrapped tea bag or two in each card and asked the nurses if they could give them to everyone on our floor. They said silly things like ‘Wish we were here’ and a stick figure fishing. Or ‘Bee Well’ and a horrible bumble bee I’m sure they thought was drawn by a child. I know how much these tokens of love had meant to me while I was struggling and I hoped they would do the same for the others.

I do not know what to tell you, but it makes you believe in miracles, I can tell you that. That year I would pick up a camera, and never put it down.

I would go on to win my way into a rural calendar, and land the front cover of it. I became a professional wedding photographer being paid to visit all the best places.

And less than a year later, I would arrive at that very same hospital, the one I barely walked out of, making my way to the maternity ward two floors down, to give birth to my first son.

I write this as I nervously await results on a pre-surgery CT scan that has been grazing my mind for a while now. A growth on my sinus has been plaguing me since a child and it may be time to have it removed. The medical system moves quite slowly and the waiting process is a brutal stress. I have some amazing precedents to show though, no matter what comes my way. The trick is, I believe, to just say point blank: Whatever is in front of you will NOT bring you down.

When I get asked how I have managed to pull through impossible feats, or survive near death experiences, my answer is always, ‘I knew that wasn’t the way I was going out.’ When you get sick and tired of being sick and tired, rest, but do not quit. You owe yourself all the white flags you tie-dyed with laughter and memories, in order rescue you from even the possibility of surrender.”

This story was submitted to Love What Matters by Kayleigh C. Lynds of 16 Seasons photography in Alberta, Canada. It originally appeared on her blog. Submit your own story here, and subscribe to our best stories in our free newsletter here.