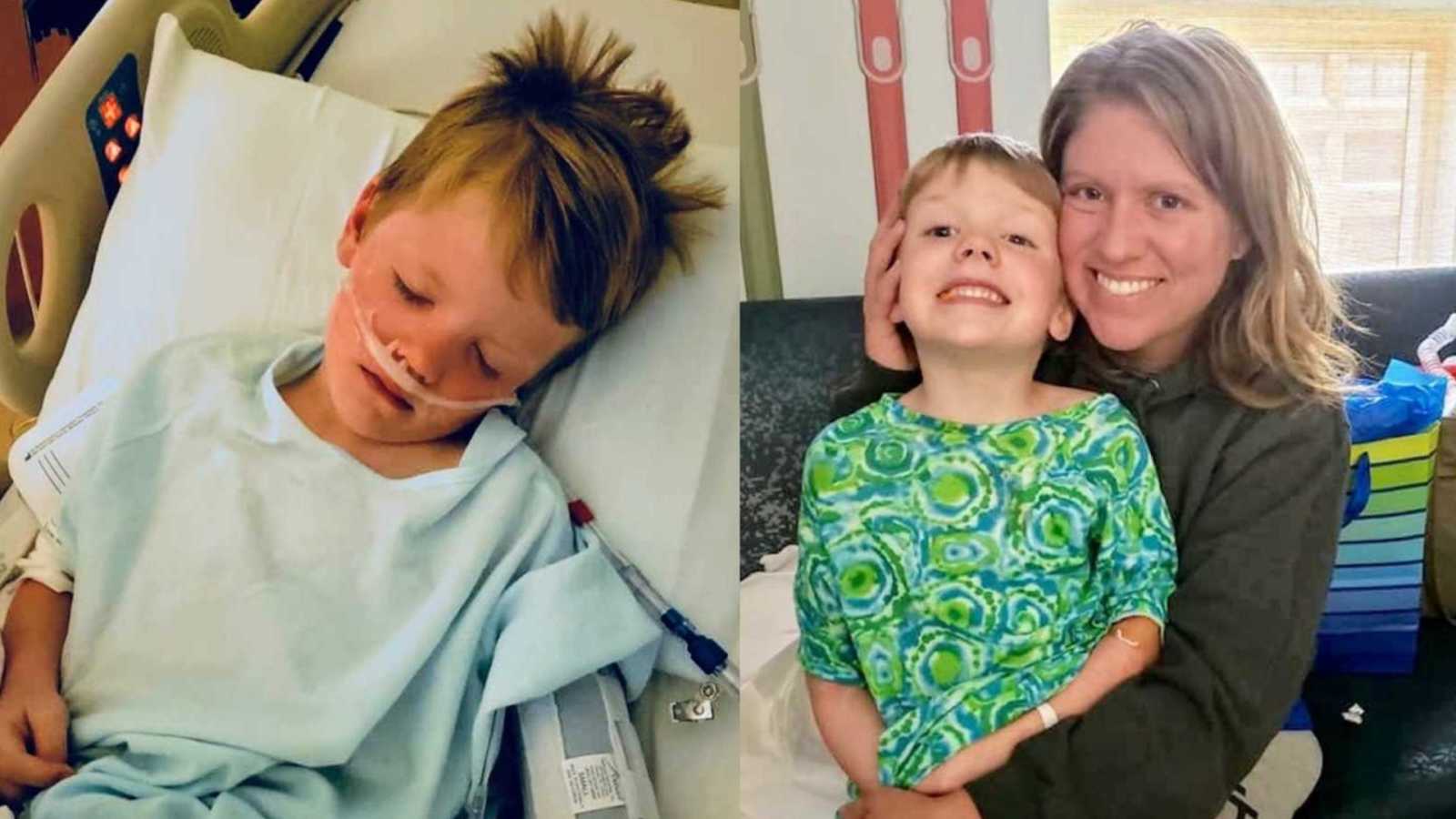 “My son drowned 3 days ago. His limp, gray, lifeless body was pulled from the pool and it was every mother’s worst nightmare. He was dead. I heard screaming, and after a minute realized the screaming was coming from me. I watched in slow motion as people rushed to him, as he was laid on the concrete, as CPR was started.

A million thoughts were flying through my head as I stumbled around, not knowing what I was doing, screaming. I saw my dead baby on the ground. I thought about his twin brother and how could his life go on without his twin. I saw my 10-year-old son, hysterically sobbing, in his bright blue swim trunks, his beautiful tan skin glistening with pool water still. His life ruined because he just watched his brother die, drowned in the same pool where he was playing. I saw my sassy little 3-year-old daughter, in her pink unicorn and rainbow suit, just watching me, confused. And how was I going to tell my husband that I let our perfect 5-year-old son drown?? It was exactly like I’ve read other people say in emergency situations: I thought this must be a dream, one of those dreams that you wake up sweating from, short of breath, because it was so real. Wake up! Wake up! But no, I was already awake. Then the screaming was worse. This is happening. My funny, silly, sweet, handsome, artistic, thoughtful little blondie was dead.

I finally was able to force myself to stop screaming, I ran over to where CPR continued on my precious baby. I have no idea how long it was. 10 seconds? 3 minutes? I don’t know. But I ran to him and watched and cried and talked to him as my friend tirelessly and relentlessly continued CPR. He looked awful and perfect still at the same time. I watched as water and vomit poured out of his mouth, eyes swollen and rubbery looking. Then a miracle happened! I don’t remember what it was first, but he showed some sign of life because several people at the same time exclaimed ‘there he is!’ and encouraged me to keep talking to him. My friend kept working, I kept talking. He started to try to open his eyes and another round of exclamation occurred. My friend said she could feel a pulse, they decided to move him off the concrete to the pool house. A million thoughts continued racing through my mind. I was sure even if he was saved, it was too late. I was sure machines were going to be doing his living for him. I was sure it had taken too long.

Everything that happened next seemed like an eternity. The ambulance took forever to get there. They tried to get an IV on the scene but couldn’t. The ride to the hospital was painfully long. But my baby started coming around! He jerked his arm back with the IV needle stick! He cried! He was coughing! Somehow, my baby was still with me!

We have now been in ICU at Peyton Manning for the last 3 days. He is sitting beside me in bed right now playing with a stuffed puppy a friend brought to him and watching Captain Underpants for the 70th time. He’s off all oxygen. He will very likely come home with me today. Home with me 3 days after drowning, home to live happily with his family instead of us burying him today.

The reason I’m sharing? This happened in a pool full of people. A pool full of ADULTS. I’ve read so many stories about kids slipping away from their parents and getting into a pool, to be found drowned shortly later. I’ve never considered the possibility that my child could drown right in front of people who were watching him bob up and down from the bottom of the pool to just below the surface, but didn’t think he was struggling because he looked like he was PLAYING. When I found him myself, 2 feet from adults who were in the pool, my first thought was that it wasn’t him, that it was someone else’s kid who was seeing how long they could hold their breath. I can 100% understand why the adults who were RIGHT THERE didn’t recognize that he was drowning because when I saw him, I too thought he was just a kid who was playing. What tipped me off was the kid I saw was wearing a shirt: Adam had gotten in the pool in his shirt. He doesn’t know how to hold his breath. GET HIM OUT!!!! THAT’S ADAM!!!!

This was 100% preventable. The fault was MINE. He’s a big 5-year-old. He has a very needy twin who makes it easy for me to forget that Adam is still 5 too and has needs that other 5-year-old’s need. He’s not self-sufficient even though sometimes I feel like he is because he’s so capable. I didn’t tell him to get in the pool without his Puddle-jumper on, but I was aware that he had. I simply told him to stay in the shallow end while I got his sister’s swimsuit on, then I would be over. I thought it was fine for 5 minutes, as he could touch just fine in the shallow end, he wasn’t alone because there were multiple adults IN the pool, and I’d be right next to the pool getting her suit on. Wrong. I have never ever been so wrong. He remembers what happened. He said he slipped off the edge. Based on where he was in the shallow end, and where we found him, he means the ledge from the shallow to the deep end. He said he kept going to the bottom then to the top and tried to yell ‘Mommy!’ It kills me to hear that. It kills me to know that his last thoughts were that mommy didn’t come for him. But God decided to give me another chance to do better. He gave my baby back to me. Now he knows I DID come for him.

Who knows what we’ll face from here? Physically, it is beyond comprehension that he is suffering no consequences. He is asking to go back to my friend’s to swim and says, ‘this time, I’ll wait for Mommy,’ before getting in the pool. But he yells for me every single time I’m out of his sight. He clearly has some anxiety that he didn’t have before. I pray that some counseling and lots of reassurance will fix that.

I’m sharing this because I want to prevent this from happening to anyone else. Before going to any pool, first make sure your kids know not to get in until the adult who is responsible for them is ready to watch them. That sounds like common sense, but I was thinking because so many adults were present, he was fine, but those adults didn’t know his swimming ability, so they didn’t question when he was under water. Second, KNOW THE SIGNS OF STRUGGLE! Adam didn’t look like he was struggling! He wasn’t splashing, thrashing, or screaming. He was simply underwater and couldn’t get his head above water. Third, know CPR. I do know CPR. Could I have performed it in that moment? I like to believe I could have if I hadn’t seen someone else taking charge. I like to think if I had been alone, my survival skills would have kicked in. Luckily, I don’t know, because my amazing friend was busy saving him, but I do know that if I didn’t know CPR, my helping him if we’d been alone wouldn’t have even been a possibility.

I said I wasn’t going to share what happened. I feel so responsible (I am responsible!) because I let him get in without any sort of safety device on, and he was in before I personally was ready to watch him. But I decided to share because I see parents at pools doing these same things every single day! And I’m sharing to hopefully spread drowning awareness.

Please take water safety seriously. I never thought this would be me. It was me, but thanks to God and my dear friend Kristin, my son is still safely here. Learn from my mistakes so it’s not you.

I have no pictures of what he looked like when he drowned. Unfortunately I only have the image forever tattooed on my brain. I’ve shared a few images of him in the hospital and the most important one, the one with his guardian angel, Kristin Moon.

Please, please, please share this. I’m a nervous wreck to share what happened, sick to my stomach to hit ‘share’ actually. But I feel this happened to save others. In my heart of hearts, I know other parents need to read this.”

“We’re home! We actually got here last night. Adam is fantastic, outside of coughing and shortness of breath with too much activity. We’re beyond overwhelmed by the outpouring of love and support we’ve received these few days. There will never be one thing I can do to return the kindness. Much much love to you all!

Please don’t forget Adam and his story! Remember every time you go to a pool. Watch your own kids, and also signs of drowning from others as well. Learn CPR. If Adam can save some lives by teaching others my mistakes, all he’s been through will be worth it!”

This story was written by Maribeth Leeson and originally shared on Facebook. Do you have a similar experience? We’d like to hear your important journey. Submit your own story here, and be sure to subscribe to our free email newsletter for our best stories.