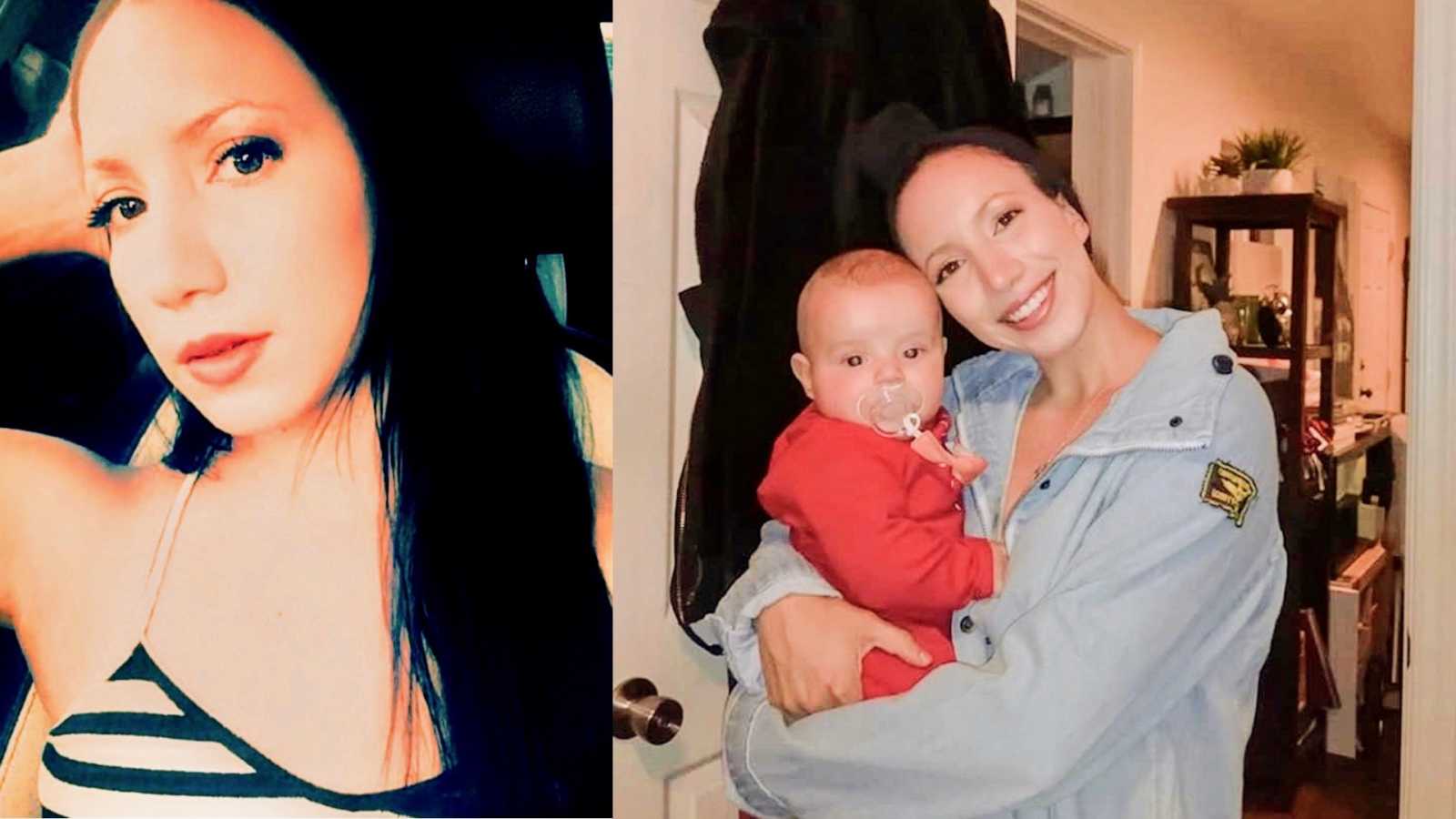 “The day I found out I was pregnant was one of the most shocking days of my life for many reasons. I was told I had Polycystic Ovary Syndrome (PCOS) when I was 13 years old and from then on, many doctors always told me that because I only ovulate once a year and had a tilted uterus that getting pregnant on my own would be ‘like hitting a nail in a haystack’. I had accepted this at a young age and always saw myself adopting one day. I also at 27 years old was still nowhere near ready to have a baby so the thought of it could not be farther from my mind.

I began having problems with drugs and alcohol at 19 after an abusive relationship and serious depression left me broken, lost, with an overwhelming sadness and dislike for myself. As my addiction progressed, I found myself 27 years old with a crippling heroin addiction and I hadn’t gone a day in 8 years without drinking. I was a master at hiding my addiction from family and friends but when I was alone, I was an absolute mess. I cried myself to sleep every night and woke up in full blown withdrawal almost every day. When I wasn’t falling asleep smoking cigarettes I was escorting or partying.

Finally, one day I was able to open up to my family when I just could not take it anymore and they told me I had to give up everything I had and come stay with them and get clean. I was fully open to whatever they told me to do I was just so grateful to be getting help. I went through the most painful and debilitating withdrawal of my life.

Every day I would talk to my friend Austin, who had gone through the same struggles and now had 5 years clean, he was my rock during that time. We had been very good friends for years and helped each other through battling the same demons. He helped me make it to about 25 days clean. And then I got the call, he had been robbed and shot in a parking lot. He was gone. My world crumbled. I remember feeling so confused and shocked. Why him? Why now? What’s the point? Everything told me to go use drugs because who cares anyway?

Instead I went to a meeting, I spoke and told everyone what happened and told them I was so distraught I couldn’t think of what to do but to go back to addiction. A week went by and I had managed not to go back to drugs by sheer will but after the funeral I decided I couldn’t do it and I would meet with my dealer, I texted him and he responded and then in that exact instant I received a different text that I believe saved my life. A guy from that meeting texted me asking if I was ok, how I was doing. I stopped and made a decision right there not to use drugs that day. It was like GOD was showing me there was something else waiting for me if I just stayed sober.

We ended up talking and I opened up about my grief and he shared that his father had passed away and we were able to connect. We started dating and somehow against all odds and at seemingly the worst time, 2 months later with not even 90 days clean… I found out I was pregnant.

My sister pushed me to have an abortion, but I couldn’t do it. I was soon forced to leave her house because she didn’t agree with my decision and in a scramble and with almost nothing to work with, me and him found the tiniest guesthouse to live in. We both found jobs and slowly but surely created a modest life to bring our baby into. The odds were fully stacked against us, but we both stayed sober and in a mountain of grief and chaos we brought light into the world.

Our baby boy came after 22 hours of labor, perfect and healthy. I gave him the middle name Austin after my friend who helped me so much and passed away far too soon. I stayed sober for my son, but he was the one who saved my life and gave me my purpose, my reason to be the best version of myself.

We are still together, our little family. Sober, stronger, and happy as can be.”

This story was submitted to Love What Matters by Laura Amoretti, 28, of Phoenix, Arizona. Do you have a similar experience? We’d like to hear your important journey. Submit your own story here. Be sure to subscribeto our free email newsletter for our best stories, and YouTube for our best videos.