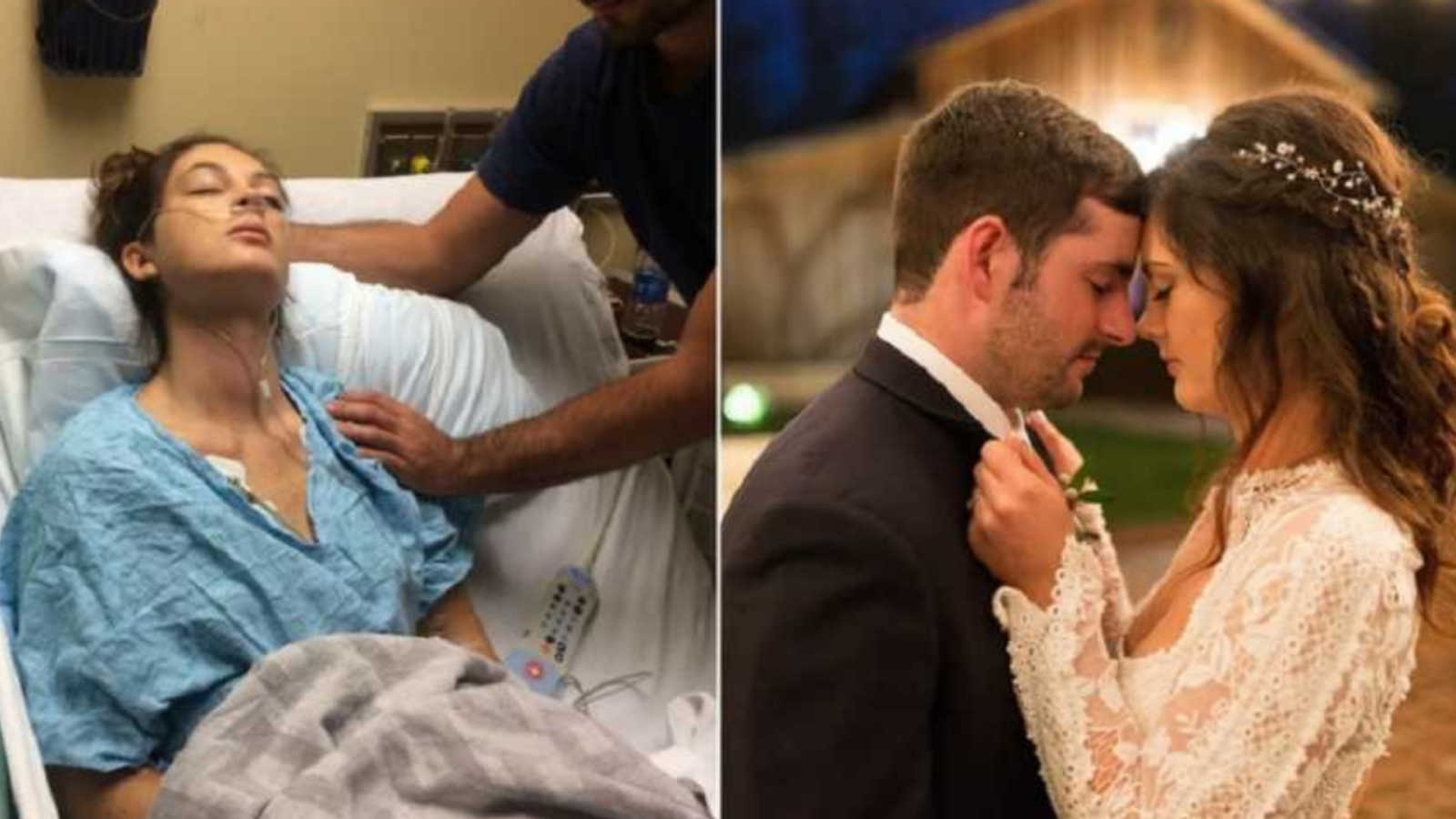 “Bryan and Taylor’s love story began when they were 14 years old—they were literally just kids when they fell in love. They are both approaching 25 now and were engaged in August 2017. To understand the beauty of their story, I need to take you back…

In December 2005, when Taylor was 12 years old, the US Air Force moved us to my husband’s final duty station in Charleston, South Carolina. (Tim, my husband, served the USAF for 22 years before retiring).  We settled down not far from the air force base in Summerville, South Carolina. Bryan and Taylor met when they were in middle school. Bryan’s circle of friends quickly began to include Taylor when they were 14—that circle of friends included Bryan’s twin sister, Allyson, and two others who actually stood next to Bryan and Taylor on their wedding day as their Best Man (Chase) and Matron of Honor (Rachel).

From the time she was 14 years old, Taylor really only ever had eyes for Bryan—we call these the ‘You Belong With Me’ days…yep, the Taylor Swift song. See, our Taylor was the biggest Taylor Swift fan then, and she still is. After two years, their friendship finally blossomed into something much more. At 16 years old, on January 25, 2010, they began to officially date—and so began the ‘Sparks Fly’ part of their journey together. This journey took them through the remainder of their high school years and all that comes with it.

Bryan and Taylor were inseparable. Taylor could always be found in the stands at Bryan’s baseball games, watching her star 1st baseman and cheering Bryan and his beloved Ashley Ridge High School team on. She cheered along with many others as the team won the State High School baseball title in 2012, his senior year.

During that final championship game, Bryan sustained an injury that he disclosed to no one—he didn’t want to let his team down, so he continued to play through the pain because his team was relying on his strong bat and his swift skills at 1st base. That injury, which required the Tommy John Surgery the summer after he graduated, impacted Bryan’s original plan to play baseball at the College of Charleston, where he had already signed a letter of intent. He pushed through the healing process that summer and fall and eventually was able to take the field the following spring at the University of South Carolina – Lancaster. He completed two successful years at USC-Lancaster before transferring to Charleston Southern University to begin his final two years and complete his BS in Criminal Justice.

During his time at USC – Lancaster, Taylor was enrolled almost 200 miles away at Charleston Southern University working on her Bachelor of Science in Nursing. While most young relationships fail with strains of time and distance, Bryan and Taylor’s only grew stronger. They remained committed to one another. Bryan’s college baseball career was marked with a nationally ranked hitting streak, a Golden Glove and Defensive Player of the Year Award. And through it all, Taylor supported him and the busy schedule that is created for any college level athlete, all while working part time, attending class and working her nursing clinical shifts.

We were proud of their love in those days, but what occurred in July 2014 transitioned their love in everyone else’s eyes to a new level. As they both were approaching their 21st birthdays, Taylor went in for a routine dental procedure (extraction of wisdom teeth). What occurred afterwards wasn’t so routine. As she was coming out of the anesthesia she began to have trouble breathing and experienced what appeared to be a series of seizures. The oral surgeon called an ambulance, as he knew something was very wrong with Taylor and she was rushed to a local hospital. In the frenzy that ensued, no one could explain to us what was occurring with our daughter. Bryan was working that summer day in Myrtle Beach, South Carolina, and upon getting the call rushed to make the 2-plus hour drive back to Summerville—not knowing what actually happened, just that Taylor was not stable and she would stop breathing intermittently.

In the moments where Taylor was coherent, the only thing she would mumble was, ‘Bryan.’  She asked for him so many times that one of the ER Nurses said she needed to size him up to be sure he was worthy when he got there. In horror, Tim and I watched as crash carts were brought in and we were pushed out of the emergency room. A little over two hours later, Bryan arrived and joined us in what we all can only describe as what felt like an episode of ‘House’—initially no one could tell us what happened or was happening with our daughter. The initial fear we saw on Bryan’s face is something Tim nor I will ever forget—but we watched as that fear turned into an incredible strength, a strength fueled by love. See, we always knew Bryan loved her, but we never truly understood the depth of that young love until that day—a day we watched their young love experience a very adult situation.

Taylor failed to stabilize, and this resulted in a move to the ICU where she could be closely monitored.  That first night, we were told only two people could stay with Taylor. Tim, Bryan and I all looked at one another and Bryan mumbled something about, ‘Of course’ with a nervous and almost defeated look on his face. And then, in the moments that followed that silence, I watched my husband make the most difficult yet easy decision he had ever made as a father. I watched him hand Taylor over to Bryan. ‘Tina, you need to stay—and so does Bryan.’ I looked at Bryan and asked Tim to follow me into the hall. ‘Are you sure?,’ I asked as I watched tears begin to well up in the eyes of my strong soldier. He said, ‘Yes, I’m sure. Tina, don’t you see it—she needs him more than me now—he is her protector, it’s not my role anymore.’

Over the next four days we experienced significant ups and downs—and multiple diagnoses shared by the many physicians and specialists who came in to see Taylor. The ultimate diagnosis was a severe reaction to the anesthesia, that would result in no permanent damage. Looking back, the diagnosis almost doesn’t matter. What matters most was the love we watched between those two ‘young kids’—after the moment Tim entrusted his child to Bryan, he refused to leave her side. I forced him to go home and get proper rest on day two—he showed back up in three hours—and didn’t leave her side again until it was time to go home. He slept in the hospital chair sitting up, fed her, and wiped her forehead and held her hand every step of the way.

What was clear to every person who walked into that hospital room was their love was a love beyond their years, it was a love that would serve as an example to couples twice their age. It was a love only God Himself could have planned for them. It inspired all of us, to the point that nurses chattered about them in the halls and family began to realize it would pursue long beyond this hospital stay. Quite simply, it was the love fairytales were made of. It made you believe in love when you watched them.

In December 2016, a few weeks after Bryan graduated from Charleston Southern University with his bachelor’s in criminal justice, and a year and a half after Taylor’s hospitalization, Bryan asked Tim for Taylor’s hand in marriage. However, he was clear in telling Tim and anyone who continued to give him a hard time about proposing that he would not ask Taylor to marry him until he could provide for her. On August 16, 2017, that day finally came, a few days after Bryan accepted a position in law enforcement. This engagement was met with so many ‘It’s about times’ it was ridiculous! Yep, our two civil servants (an RN and a Police Officer) were finally going to get married!

From the beginning, everyone will tell you Bryan and Taylor just fit. So much alike in so many ways, so admired by so many—their perfect love, a love they found at 14 years old and made official at 16 years old, never saw one break up—not for an hour, not for a day—THIS amazes every one when they hear it.

Separately they were loved so much. Together, they were adored. Simply put, everyone who knows them or even knows of them has always loved and cheered on their love story. It’s been ‘perfect’ in nearly every way, so it wasn’t surprising when at their wedding on April 15th, 2018, they danced to ‘Perfect’ by Ed Sheeran.

Tears flowed throughout the barn of the Wheeler House in Ball Ground, Georgia, because everyone knew they were witnessing a true fairy tale unfolding into a Happily Ever After. Anyone present will tell you, this love story will be celebrated for a lifetime—and it’s rare but believable that young love can last…it can overpower anything—just ask that father who knew as he walked away from the ICU on July 11, 2014. He will tell you all about what young love can do…”