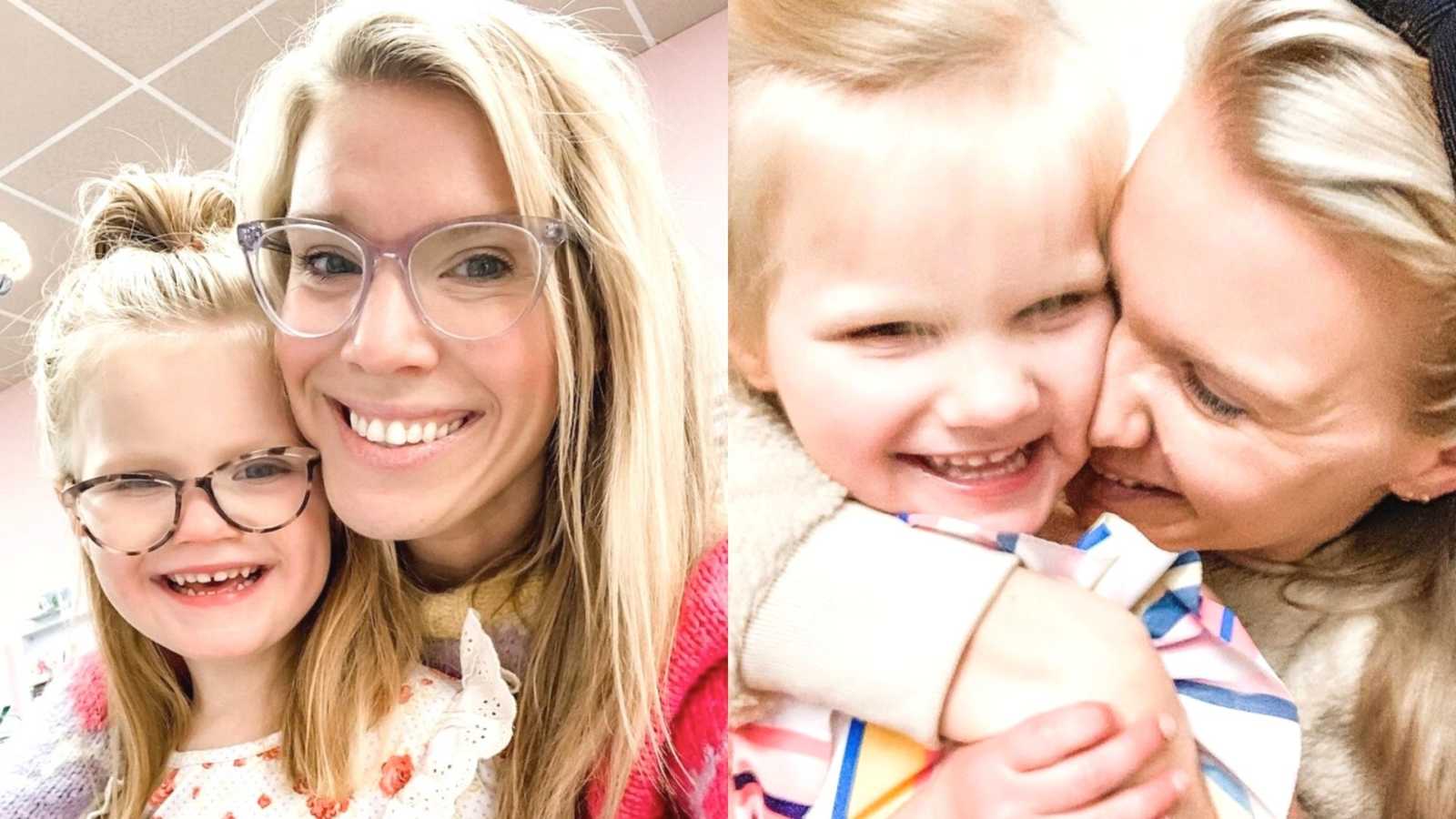 “After a decade in NYC, the city where we met, got engaged, and brought our first child home from the hospital, it was time for us to quit New York. It’s never just leaving this town – it’s a pulsating place that serves as a port to so many post-college milestones in both career and in life. Our chapter here was ending. I was pregnant with our second daughter and we wanted what most non-native Manhattanites desired: a home, a yard, a place to grow our family. So we did the unthinkable as a born and raised Pennsylvanian couple. We moved… to New Jersey.

My pregnancy was textbook easy. Not new to the game anymore, I had come to anticipate and enjoy the changes in my body all the while watching my almost 2-year-old daughter, Morgan, blossom as a toddler. I suffered from severe postpartum anxiety after Morgan was born and the work I had to do to heal from that was simply my training course to what life had yet to unveil. A figurative foreshock earthquake of my life. A year of therapy, many psychiatry visits, and fellow new mama friends all aided in my recovery and I felt confident in the plans laid for our second child and motherhood round two.

We found out our offer was accepted on the house in November of 2014 while we were at the Museum of Natural History. The finality of it felt like the deep breath and celebration we needed just before the holidays. The new home nestled near a park in a darling town in New Jersey. My pregnancy continued to be completely uneventful even as we hustled to furnish and decorate an entire home. We came from a 925 square foot life in the Upper West Side. And yes, we felt boringly blessed. And then along came Milly! 7 days late just like her big sister, our Milly girl came into this world in an uneventful fashion. Epidural, a little relaxing before pushing three times, and out she came. ‘Do not tell your friends that your labor and deliveries are like this. It’s completely unfair how easy this is for you,’ said my OB, with whom I had
formed a wonderful and banter-filled rapport.

My tiniest baby of my now three children, she was 6 pounds and 14 ounces of sugar. She slept soundly in hospital, she nursed fine, and she honestly barely made a peep. Her first nickname had emerged: Chilly Milly, our little second born who just goes with the flow. I felt so confident and at ease at the pace of our days. They were full but they were also really really good.

When Mills was about a year old and wasn’t babbling much or walking, I began to suspect something greater was going on but quickly landed on something I knew for sure: every child was different and I didn’t birth Morgan’s clone. She was along for the ride in some ways and I easily sold myself the idea she’d catch up on her own, on Milly time. But then the behaviors began to arise. Her lack of play. Her complete disinterest in other children her age. The way she’d fling her head back every night when I’d read her a book and rock to sleep. She really just started to feel more foreign to me. As she got older with each passing month, I didn’t seem to understand her MORE… I actually understood her LESS.

Around 18 months of age, a pivotal experience occurred and one that is ironically marked with a series of photos. We had decided to have family pictures done with a photographer at a park on the opposite of our town. I had planned the timing and the day down well, we would get the pictures done in the late afternoon so both girls could nap, have a snack, and be fresh-faced for the golden hour in the park. Morgan turned it on. In fact, as Milly’s cries became inconsolable, Morgan had the photographer snapping away at her.

‘Did she nap today? Do you think she’s hungry? Maybe she just doesn’t like the tulle on the dress?’ remarked the photographer. But I knew it wasn’t that. My holding her wasn’t enough, my singing wasn’t enough, being put down wasn’t enough. And it wasn’t just not enough; her cries sounded painful. As if these gorgeous woods and crunching leaves and walking along a path she didn’t know of caused an aching in her body and mind. I felt defeated in this moment but also in my second-time motherhood journey. I was allowing her to develop in her own way, yet when I let her lead me, I was only met with deep frustration, hit the floor style meltdowns, and tears. Lots and lots of tears.

We began early intervention sometime shortly after Milly’s second birthday – something for me that seemed foreign yet necessary. ‘If you can just get my child to talk, we can take it from here,’ I thought to myself and likely said out loud to the case manager and evaluating team. ‘We would like to max out on speech therapy and take it from there…’ I learned quickly speech therapy was only part of the
puzzle in early childhood language development, and that play therapy and occupational therapy of fine and gross motor are even more important in establishing the mind’s road maps for language.

We gave way to the experts on this and followed their guidance. However, none of it was dramatically changing Milly’s course. Her behaviors were becoming increasingly violent. The two to three times a week morning therapy seemed to only exacerbate her frustrations and then leave us both wiped out and tired. (I was also pregnant at the time with our third and my energy’s bandwidth was shrinking.) The wait-and-see remained. I honestly didn’t even know what that meant at the time, this ‘wait and see’ nonsense. Wait and see what? For her to miraculously wake up one morning to talk and act like my oldest did at the same age? To do a behavioral 180? In some scarily truthful way, yes that was what I thought would happen. We’d wake up one day and she’d be ‘fine.’

The summer came and went, my belly grew uneventfully well, and in October of 2017, our first son was born. The magical moment of the girls meeting him was both adorable on one hand and dissolved into a mess within minutes. There was no holding of her brother. There was only shrieking and tears. I just didn’t know what to make of it all. Why oh why is this dream of mine – of having a family and kids – evolving and morphing into something I didn’t even understand. Reality itself was so foreign to me and yet we kept on moving right along as there was no other choice.

Milly’s diagnosis came on January 11, 2018. The after. We no longer lived a life where autism was just a term. It was the world, country, state, and town on every level of our emotional governing body. I collapsed like an empire. I collapsed onto the bathroom floor sobbing. I collapsed into my friends’ arms and on the phone sharing the news. I physically collapsed alongside all my dreams for my Milly. I didn’t even know which way was up, how to guide this precious girl of mine, in my sleep-deprived newborn haze I was also in. I wanted to ‘fix it’ and just be told what to do. But what I leaned into was a quote from my favorite author and activist Glennon Doyle to ‘just do the next right thing. One thing at a time. That’ll take you all the way home.’

So that’s what we did. We educated ourselves on autism, schooling, and therapies. We sat in the hard days of observations and evaluations and meetings and calls with what seemed like 45 practitioners trying to lead us to what our ‘next right thing’ was for Milly. It took 3 months for us to know solidly what to do, what school to send her to, and how to settle in as an autism family.

My heart broke daily for things like the sisterhood relationship I had envisioned for Morgan and Milly. But it also, within those cracked dreams held space for something so beautiful I never could have ever imagined had autism not come into our life. The gift of today. Of the now. Of no single developmental milestone uncelebrated. Of the amazing depth of childhood empathy. Of the rock bottom style love of friends. Of the barbed wire of togetherness my husband and I felt navigating something so guttural. And of profound acceptance of our new reality.

Milly has since gone on these last 2 years to thrive. Her ABA preschool provides the structure she needs to learn and allow her personality to emerge. A true ‘worker bee,’ Milly has become a beautiful example of how a diagnosis doesn’t change who you are. It simply allows you to become the best version of your innately wired self. She wakes us up most morning chirping away her little songbird like melodies. She loves her favorite books and nursery rhymes a hundred times more than any neurotypical toddler ever would. And my god am I so proud to be her mama. If you ever need to know what unspoken love looks like, just find yourself a way to stare at the space between a nonverbal autistic child and their mother. You’ll find it right there.”

This story was submitted to Love What Matters by Sarah Markle from Westfield, NJ. You can follow their journey on Instagram. Do you have a similar experience? We’d like to hear your important journey. Submit your own story here. Be sure to subscribe to our free email newsletter for our best stories, and YouTube for our best videos.

‘Mama’s only human. I can’t promise I won’t ever let bad thoughts creep in or have bad days. But I can promise I’ll always be there.’: Autism mom pens open letter to kids 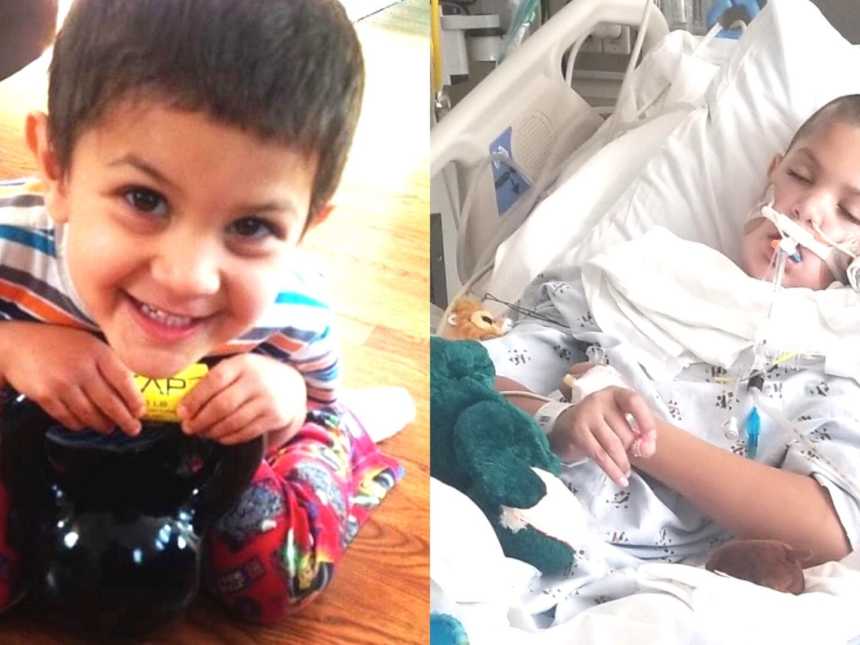 ‘THEY CALLED A CODE BLUE!’ He started screaming and grabbing the sides of his head. ‘It hurts!’: 8-year-old survives AVM brain rupture, ‘He’s still a fighter’

“A text came through that said, ‘Get to the hospital now.’ I thought it was a typo. His dad carried his limp and lifeless body into the hospital. I was shaking and screaming. ‘No! Not my baby, not my Ricky.”

‘My daughter was placed on my chest. Then I began hemorrhaging over half my blood volume.’: Mom recounts traumatic birth of miracle twins

“My journey to motherhood was less than traditional.”