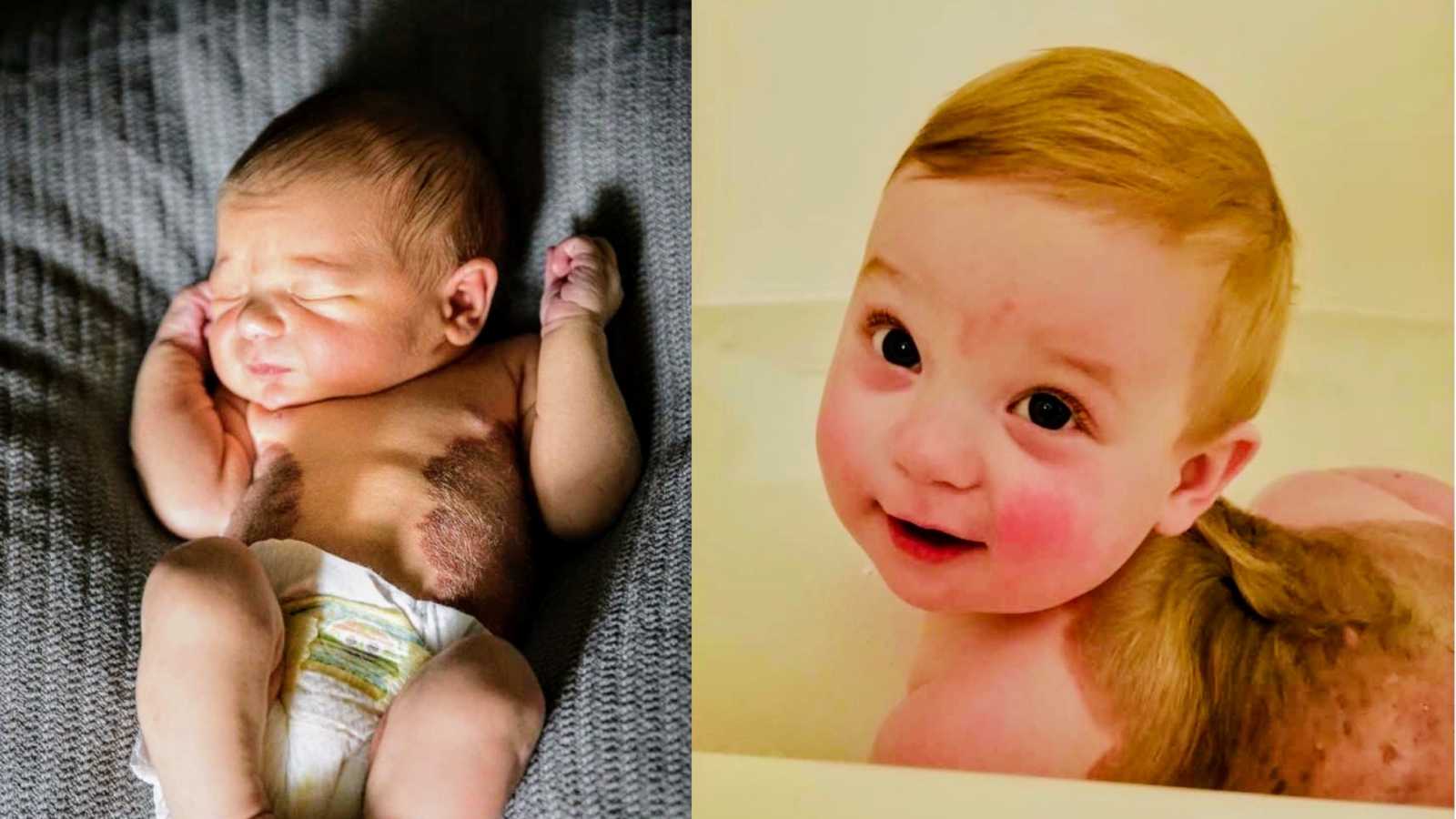 “Our older son’s birth was surrounded with drama after my mother in law was badly injured in an accident on our farm just six weeks before he was born.

Three years later, I was pregnant again and we were looking forward to having a much less stressful birth. Once again, I developed a pregnancy condition called Intrahepatic Cholestasis of pregnancy, but that was something I knew was likely to come and while scary and extremely uncomfortable, at least I knew what to expect this time around. However, our baby had been cooking up drama all along we discovered.

Ben was born via a planned C-section. I didn’t understand why they only let me see him for a split second before whisking him off to be cleaned up. My husband told me later that as they were cleaning him up, he saw the nurses look at each other wide eyed over their surgical masks. As they stitched me up the pediatrician told me that Ben was born with a birth mark on his back. I think her exact words were ‘he has a large birthmark on his back.’

Ben was born with what is called a Giant Congenital Melanocytic Nevus. Basically, it’s a huge mole that covers his entire back as well as most of his belly. While a baby born with a Small Nevus is quite common, but only about 1 in 500,000 babies are born with a Giant Nevi. We soon learned that while the main issues facing Ben were cosmetic and likely physiological as he got older, there was also a chance that Ben could have melanin deposits on his brain or spine that could cause problems. We also learned that children with Giant Congenital Nevi are at a much higher risk of developing Melanoma.

Then there was the additional curve ball Ben decided to throw at us.

When Ben was born, he had a small lump about the size of a nickel, in the middle of his birthmark, on his lower back. The hospital where he was born didn’t say anything about it but by the time he was two weeks old and we had our first appointment with a pediatric dermatologist, it had tripled in size.

The day we met Dr. Arkin, is a day I will never forget. We arrived at her office so very scared and unsure. As a dermatologist, she knows all about birthmarks and Nevi. But she took one look at the lump on his back and stepped out of the room to make a few phone calls. When she returned, this sweet and caring doctor gently broke the news that we wouldn’t be going home that afternoon. Instead we drove from her office to the American Family Children’s Hospital. As my husband drove, I completely broke down.

Our stay at the hospital ended up lasting 5 days. While we were there Ben was put under general anesthesia to have an MRI looking for any signs of melanin deposited on his brain or spine. The hardest thing I have ever done in my life is to hand over my tiny, 3-week-old baby to the anesthesiologist. We thanked God when the doctors told us that everything looked exactly as it should. A day later he was in surgery to biopsy the lump on his back. The tumor didn’t look like anything our surgeon had seen before. Samples were sent off and we waited for the phone to ring.

When it did, we got the worst news that could come, the lump wasn’t just a lump, it was a tumor and it was cancerous. They suspected it was some sort of sarcoma, most likely a fibrosarcoma, but they weren’t positive. Within three days of the biopsy it had grown so much all of the stitches had ripped out.

We found ourselves back at the hospital, and in a weird twist of fate, under the care of Dr. Garland, the same amazing plastic surgeon who had done my mother-in-law’s skin grafts after her accident. At a month old, Ben once again had surgery, this time to remove the tumor and areas around the tumor to make sure they got all the cancerous cells.

I am not an extremely patient person, waiting to hear what type of cancer your child has is not the type of waiting that anyone should ever have to do. Finally, a piece of the pathology came back, and it ruled out any type of sarcoma and we were back to square one, not knowing what exactly we were dealing with.

After waiting a few more weeks we got another phone call. It was the call that every person and their loved ones who are diagnosed with cancer hope for. After further pathology, the tumor was found to be a mesenchymal proliferative nodule, a rare but non-cancerous tumor that shouldn’t require further treatment after it was removed. Once again, we thanked God and cried tears of joy.

Ben was healing nicely, and we thought we would finally get back to our new normal, raising two boys on our farm but once again Ben had other plans for us.

This time we noticed that there was a small lump that seemed to be getting bigger at his incision site. After some testing it was decided that the lump was just a Seroma, a little pocket of fluid that the body would absorb after a week or two.

A month later we were back at the hospital again, with the lump more than doubled in size. This time they tried to drain the Seroma, but when they inserted the needle, instead of clear-ish fluid all that came out was blood. We made phone calls and sent text messages to make sure someone would be able to feed and milk the cows for us that night while we waited to be called back for another ultrasound.

This time it turned out that Ben had once again developed a rare complication from his tumor removal surgery and had acquired a lumbar hernia. The lump that bulged out on his back when he cried, was actually the fat that surrounds his kidney. So, he had one more surgery to repair the hernia.

Ben is now nine months old and growing and developing like any other baby his age. He is the happiest baby in the world and adores his big brother and our cows.”

This story was submitted to Love What Matters by Carrie Mess of Wisconsin. You can follow her son’s journey on their Blog, here. Submit your story here, and be sure to subscribe to our best love stories here.