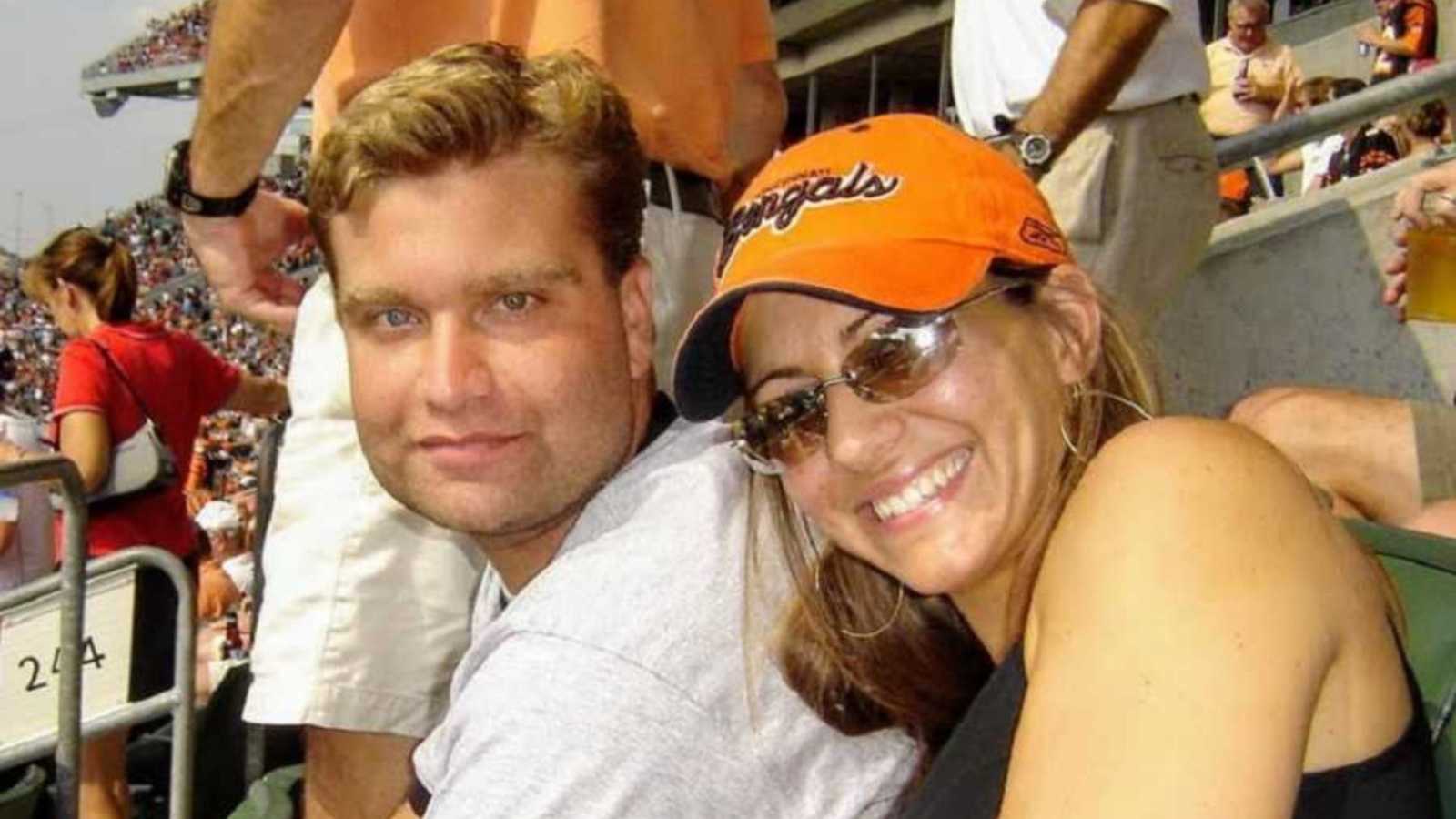 “A friend of mine told me the other day how that new song on the radio, ‘Memories,’ makes her think of my late husband Matthew. She said it reminds her of all the fun memories we all had over the years —like summer lake trips before we all had kids, dinner and drinks out downtown, of him just having a good time with all of us. I remember them, too, I said. But I didn’t, however, tell her about all the memories of him that are starting to fade.

I’m nearing the two-year mark without him. Fall used to be my favorite time of year—running with the leaves crunching under my shoes, the football games, my wedding anniversary. Now, there’s only an ominous feeling. Like waiting for a gut punch from someone lurking around the corner, ready to strike as soon the calendar flips to November. It was the Sunday morning before Thanksgiving when I became a widow. It feels like a blink but then it also feels like it’s been a lifetime. I somehow got past the ‘year of firsts’ where every calendar date was pure heartache to re-live. The first Christmas without him. The first Father’s Day without him. The first kindergarten graduation without him. The first birthday without him. It all sucked. I cried a lot behind the bathroom door. I faked a sh*tload of smiles. I did a lot of self medicating with Baileys and Amazon Prime.

The second year was just a lot of new normals instead. They still sting, but it’s what we’ve grown used to, living every day without his presence, without his voice or laughter. The condolences are gone. Life has fully moved on around us, as I knew it would, despite my not wanting it to. There are pieces of him—of us —that seem to be getting lost amid what’s here and now and I don’t know how to feel about it.

I am trying not to forget his smell but it’s fading. It’s all but gone from the clothes I saved in the closet. That clean, soap-fresh smell. Even when he was working out, he always smelled good. I found myself in the deodorant section at the grocery store the other day for a really long time. I opened up and breathed in every men’s Right Guard stick on that shelf until I smelled the sport one, the one he wore for years, and I held it close to my nose. I didn’t cry. I wanted to. But there was a guy behind me browsing gift cards and a lady looking at shake supplements next to me, and I figured they’d find it really odd to see a woman weeping at the smell of antiperspirant in aisle 11.

It’s getting hard to remember specific things about him and that scares me. Like what kissing him felt like. We hadn’t kissed in a really long time before he died. He was sick for a while and before then we had a rough patch where we fought so much and dealt with so much marital discord that the last thing he wanted to do was kiss me. He probably wished many nights to be away from me. That thought still hangs in the back of my head today because we never made everything right before cancer took him away.

I hate that I’m starting to forget stupid little things. I couldn’t remember if his favorite cereal was Honey Smacks or Fruity Pebbles. I know we had a cereal debate a while back and I’m kicking myself for not remembering how that one ended. I guess at the time, it didn’t seem important. But now I’d give anything to go back just to know the answer. The kids asked me if daddy liked Rice Krispies treats and I can’t remember. I know I used to eat an entire pan myself but I can’t remember if he thought that was gross or if he wanted me to save him some. All these things seem insignificant to others, but they aren’t to me. They are huge pieces of a puzzle that was once whole but is now slowly being broken up and dismantled in order to be put back into some invisible box it seems. To be put away forever.

I am mad at myself for letting memories fade. I should have space in my brain to keep it all in. We were together for 20 years—half my life. I can remember the way my childhood bedroom smelled over 35 years ago, so why the hell can’t I remember his smell on the pillows, from just a few years ago?

He loved holding my hand. To pinch my fingers because they were cold. He first held my hand in 1998. A lifetime ago. I’m starting to forget the way his hand felt in mine now though. I stupidly wonder to myself if he could be mad at me for that.

Because I’ve been holding a new hand lately. I haven’t told many people. I’ve been seeing someone for several months now who’s really great. He’s smart and funny and he’s irreverent and unfiltered like me. We like some of the same things—Billy Joel and Seinfeld and binge watching comedy shows on Netflix. And he loves kids and I’ve got a shit ton of them. He makes me laugh and I’ve missed that. I think he genuinely likes me—faults and temper and all. He doesn’t take any of my stubborn or b*tchy bullcrap —all the stuff my husband either ignored or complied with just to please me all those years, but annoyed him to no end. He’s the opposite. He doesn’t let me brood or pout in disagreements, many of the things that stirred the pot during my marriage. I’m learning to deal with myself and relationships differently. It’s like I’m learning how to be an adult with him—but then again, he and I have had entire text conversations with emojis that make me laugh. Some days I feel like a silly teenager again. But I dig it. He’s just who I need. Did Matthew have a hand in sending someone like that to me? I wonder.

I still feel overwhelming grief some days. And it sneaks up on me. Our son is almost 13 now. He’s a hair taller than me according to his recent doctor checkup. Sometimes the grief manifests itself as tears at the pediatrician’s office due to the aching desire to have his daddy here to see something as simple as his son’s height surpassing mine.

If we really want to talk about some super grief-y stuff, I’ve got a doozy I keep behind this computer. Sometimes I listen to the recording they emailed me of the 911 call I made the morning I found him. I collapse in tears at this desk every time because the despair in my voice that morning is so tangible it physically hurts. The memory of me trembling holding that phone, staring at him realizing he was already gone is still fresh in my mind. It’s one memory that I don’t think could ever fade. But maybe I don’t want it to either.

Yes, two years may have blurred some of the memories. It has dulled the edge of the blade that used to expertly pierce my heart every morning I’d wake up realizing he was still gone. But two years has also shown me that I’m going to be ok. The kids are ok. I’ve chosen to keep living and loving—as hard and as awkward as that might be some days. I run parallel between loving him, holding dear the memories I still have of us— and with the idea that I can be in love with a new person who’s willing to share the rest of this life with me making new memories. And there are days I fall more to one side and it scares me when it’s the side without Matthew on it.

I worry and feel guilt for still being here, breathing air, laughing and living life, especially starting to care for another man. Some people don’t like it either, I know this. Others have said, ‘It’s good to see you’re moving on.’ But I wish they wouldn’t say that. Because I haven’t ‘moved on.’ I’ll never ‘move on’ from the one person I loved more than words, the man who gave me the life I’m living now, who gave me my children. I’ll never ‘get over’ him, they don’t understand. No matter how much time keeps adding onto that calendar day when I last saw him, no matter two years or twenty, no matter what memories have faded—I will never ‘move on’ from the love I had for my husband. That is a truth that won’t ever fade.”

This story was submitted to Love What Matters by Andrea Remke of Kentucky. You can follow her journey on her blog and Facebook. Submit your own story here, and be sure to subscribe to our free email newsletter for our best stories and YouTube for our best videos.

‘Last night, my son was called ‘HOT.’ He’s 12 years old! I’m having issues with this.’: Mom uncomfortable after son is sexualized for the first time, ‘he is always going to be my little boy’