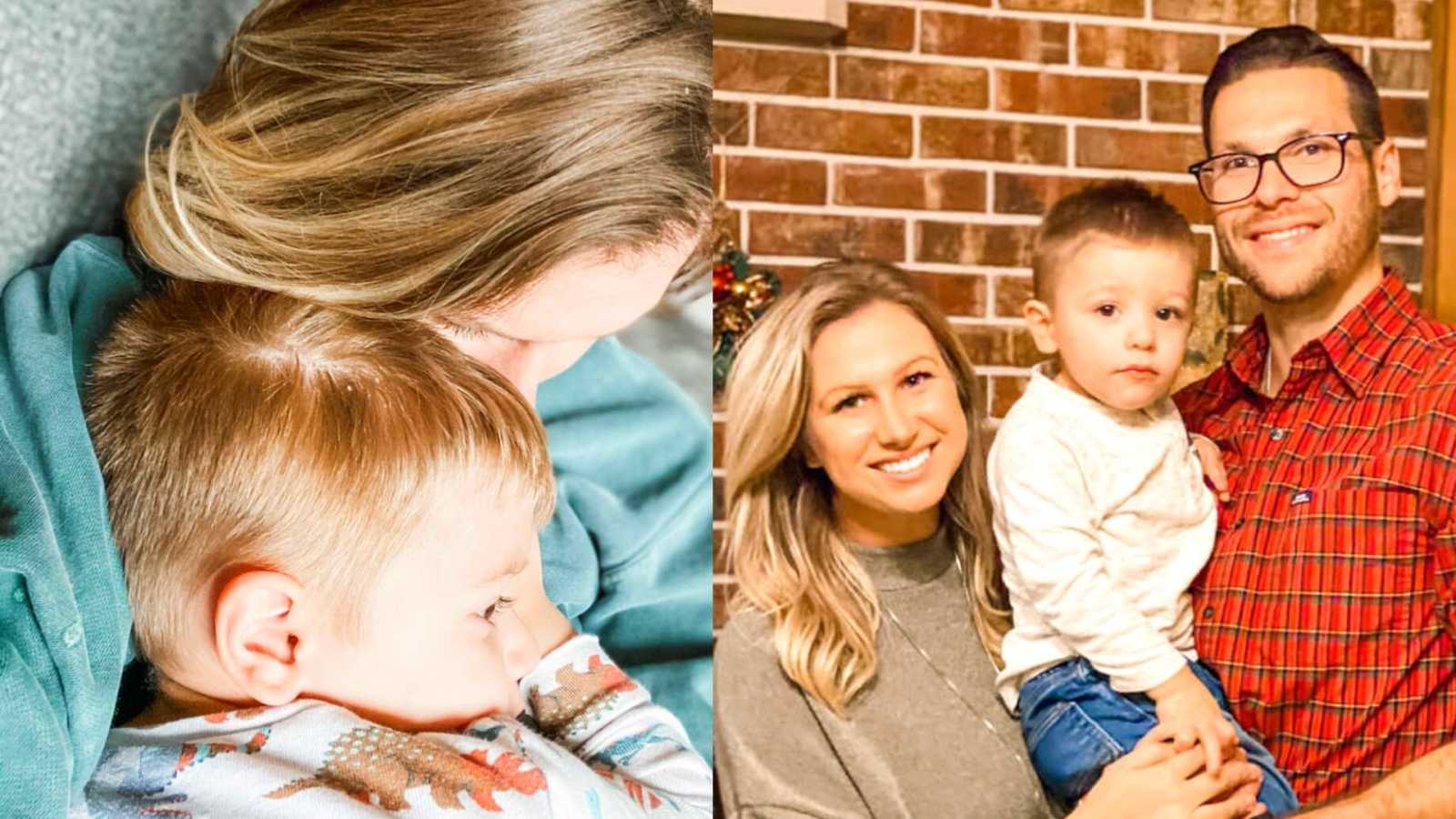 “A friend of mine recently told me I should start a blog. At first, I thought this was kind of funny… I have always wanted to but I haven’t because who really cares what I have to say, anyway? But then the word resilience came to mind. People want to hear stories of resilience. To hear about how this life has knocked them down and they come back swinging. A few years ago, I wouldn’t have described myself as this person… but today? I can absolutely sit here with you virtually and tell you I am that person. I have been through hell on Earth this year, but I’m still here, and I’m still swingin’. So if you care to follow along, I’ll tell you a story about the bravest, strongest little boy on Earth… in my totally biased opinion.

Matthew Scott was born a completely healthy little boy on December 18, 2017. This story begins 14 months later. We woke up around 4 a.m. to what we thought was Matty snoring, which he does, loudly and every time he sleeps. Something didn’t sound right, so I hopped out of bed and went to check on him. He was pale and slightly blue and having a seizure. His seizure was in status epilepticus, which means had we not woken up when we did, he would have died. We called 911 and an ambulance came 6 minutes later. I know the time because this was the longest 6 minutes of my entire life. When they got him into the rig, his O2 sats were in the ’50s.

We got to the hospital and right away we noticed the whole left side of his body was limp. He wasn’t reacting when they were trying to put the IV in his hand. This was so unlike him. Up until this point, he had been a perfectly healthy and very active little boy. The doctors said it could be because they had given him some versed to stop the seizure, so he was likely just ‘out of it.’ We were transferred to Riley Hospital for Children and the next few hours would consist of different teams of doctors coming in and out of our room with solemn faces and stumped expressions. No one knew exactly what was happening. We heard the words, brain tumor, skull defect, and stroke thrown around like they were just common terms you hear every day.

All the while, Matty was almost a shell of the kid he had been the last 14 months. The left side of the room still didn’t exist to him and he continued to have seizures for the next 24 hours. They put him on some seizure meds and did an analysis of his spinal fluid. After an MRI, the doctors suspected it was a febrile seizure that caused all of this. There was a tiny spot on his MRI consistent with seizure activity. We finally felt like we could breathe a little. The spinal fluid came back positive for HHV6 or the virus that causes Roseola, but they told us Roseola wouldn’t cause this. It was more consistent with HSV and they started intravenous antiviral meds.

After Matty went 24 hours of being seizure-free, they decided he could be transferred out of the PICU and to a room on the regular floor. I felt like this was too early, but trusted the doctors. Around 3 a.m., Matty started to seize again and also started non-stop projectile vomiting. A nightshift doctor came in and said, ‘I am concerned that we need to start looking for brain swelling.’

‘Brain swelling??’ I thought to myself… HOW did we get HERE? 3 days ago, he had a COLD! The next few hours were filled with chaos, sweat, and lots of stress as Matty continued to have seizures. They were increasing in intensity and length and the meds were getting stronger and less effective. We were transferred back to the PICU where the doctors made the decision to medically sedate him in order to give his brain a chance to stop swelling. Once he was sedated, they did another MRI.

The neurologist called us that evening from her personal phone number. I knew this wasn’t going to be good. She said the whole right side of his brain was lit up with swelling. The MRI from a few days earlier only showed one tiny spot of irregularity consistent with seizure activity. She said she thinks Matty has something called Hemi-convulsion Hemiplegia Epilepsy Syndrome and she would give us some case studies and documentation in the morning. They still have no idea what caused this or why it happened to Matty. The next morning, when I read the case studies, I sobbed. And I mean, ugly sobbed, facing what I thought was inevitable for our future. Words like total paralysis and hemispherectomy glared back at me. The neurologist warned us there’s a very high probability Matty would never walk again. They couldn’t make any promises about his cognitive abilities, either. But I knew God would take care of Matty. I just had so much faith he would restore Matty back to health. There had to be a purpose for all of this. He would use this for His glory.

Our neurologist told us it was imperative we control the seizures to give him the best chance of healing. Typically once a kid is seizure-free for 48 hours, they will start to wean them from sedation. In Matty’s case, they wanted to wait for 72. The next week consisted of constantly counting the hours since he last seized. He was wearing EEG leads and was under 24/7 video observation from the EEG techs. Every time the nurse’s phone rang, I shot up from wherever I was sitting and ran to ask if he was having a seizure. I can still hear the sounds from each machine beeping in my head. I will always remember the ‘ding ding ding, ding ding’ of him fighting the breathing tube. Once 72 hours came and went, they started to wean Matty from sedation. The problem was he was on such strong drugs to keep him sedated whenever he did come out of sedation, his heart rate shot up to 260. It was not a smooth process. He was withdrawing from all of the meds he was on. We would have to wean him a little slower off of the medications.

After a day or so, we were transferred to a regular room and once Matty was weaned from the Ativan, we were able to go to the Rehab unit where he received Occupational and Physical therapy two times a day for about 3.5 weeks. Once we were discharged from Riley, Matty began seeing an OT and a PT four times a week. In June, he started walking again! (Praise God!) We are so very thankful for our therapists. They have become like family to us, and they love Matty like their own. His personality and his cognitive abilities are exactly as they were before all of this happened. We’re still working on that left hand but all things considered, this boy is a miracle. We are incredibly thankful and we know the outcome could have been so very different.

One silver lining in this whole mess is I learned what it was like to advocate like a mother. You should never doubt your instincts, Mamas. Matty just had his second birthday and he is happy, healthy, ornery, and adorable as can be. (Spoken like a true mama.) I’d like to tell you I have chilled out a little bit… but let’s be honest. We’re probably using a baby monitor until he’s 18.”

This story was submitted to Love What Matters by Lesley Mannen from Indiana. You can follow their journey on Instagram. Do you have a similar experience? We’d like to hear your important journey. Submit your own story here. Be sure to subscribe to our free email newsletter for our best stories, and YouTube for our best videos.

‘My mind kept thinking, ‘Don’t say it. Don’t say it!’ I started to panic. Something inside me knew it was bad news.’: Mom brings awareness to secondary infertility, ‘You are not alone’

‘Jack was screaming for over 10 hours, no tears. ‘Did you forget how to hold a baby?’ The nurse took him out of my arms.’: Mom advocates for son with rare epilepsy after multiple misdiagnoses