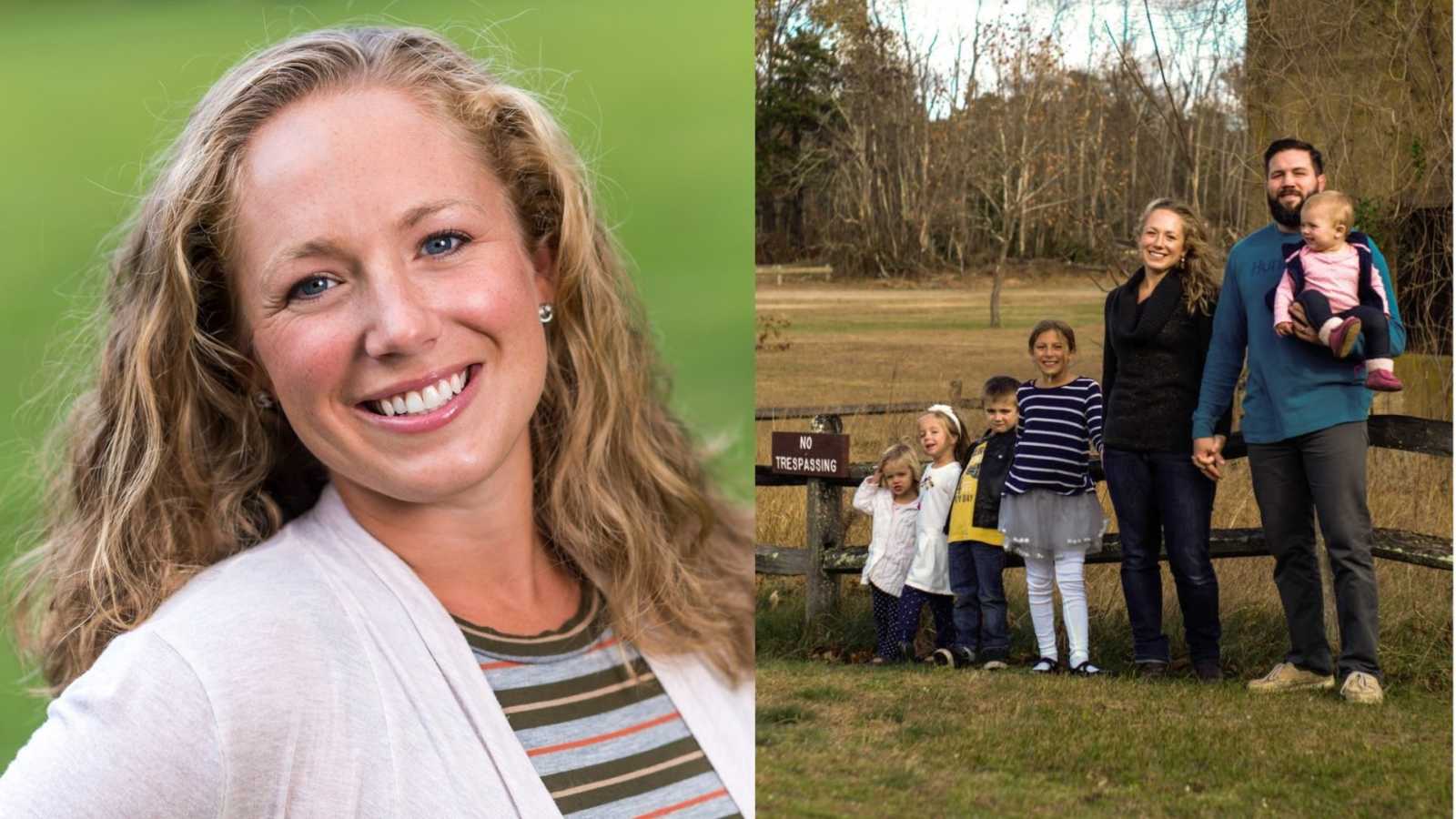 “Seven years ago, I spent the night in the ER with my husband. We had two amazing little kiddos at the time, a four-year-old daughter and a one-year-old son. ‘A perfect family’ – everyone said so. But I’ve come to know there’s no such thing…because all life is a gift, and children are a blessing.

One evening all those years ago, when my hubby came home from work, I secretly knew our ‘perfect’ little family was about to be perfected some more with another one on the way. I told him there was something on my stomach I really wanted him to take a look at. He nervously lifted my shirt and saw written across my belly in eyeliner, ‘Baby #3’ with hearts all around. He was so excited; we were overjoyed!

The next week I had an early ultrasound and was able to see our beautiful baby’s heartbeat – stable and strong. But the doctor was confused because he thought he saw some other stuff in there with the baby. Tumors, masses, polyps, bleeding? They weren’t sure what to call it. So, the doctor said to keep coming in every two weeks in order to keep an eye on the baby’s heartbeat, and just make sure everything was still okay.

We were a little scared and confused. But my husband shared a scripture with me that read, ‘Be still in the presence of the Lord, and wait patiently for him to act.’ That’s all we could do…wait. And our kind of waiting was hopeful, prayerful, confident. Worry creeped in, sure, but we had such hope. So we waited, prayed, and thanked God for this life inside me. ‘Right now, we have a baby,’ we said. ‘In this moment, we have three kids. And we can be glad for that!’

We knew this baby already had a unique, genetic blueprint. DNA present for several weeks now would determine every characteristic this child would have, all the way into adulthood. Not to mention a strong, beating heart apart from mine, which I got to see with my own eyes! It was amazing because it was life, and life is something to be celebrated. So we definitely did. But I asked my husband to please keep it quiet until the next ultrasound, for my own piece of mind. As difficult as it was, we didn’t tell our observant 4-year-old or most family and friends. But still, we were so happy and so in love already.

But then things took a turn. Less than a week before my next follow-up ultrasound, I started bleeding. It started out so slight. But when I went to bed that night, it was intense, even accompanied by the familiar feeling of early labor contractions. I was in so much pain sitting in the bathroom, I couldn’t even walk to wake my sleeping husband. I just knocked as hard as I could against the bathroom wall until he finally heard me and came running.

We had an idea of what was happening, we just hoped that it wasn’t.

‘I think we need to go to the hospital,’ I said. It was just before midnight, and I was still in a good amount of pain. We made arrangements for our two kiddos and quickly left. We prayed together in the parking lot, then headed in. After settling in at the ER, I suddenly felt the known feeling of downward pressure followed by a natural push. I wasn’t sure of it when it was happening, but soon found I had delivered my baby, right there. Completely on my own. Way earlier than I had ever wanted to.

I cried and cried as I watched the nurses put my helpless, tiny baby in a plastic take-out container, to be sent out to a lab somewhere. That’s all the time we got to spend together. My baby was quickly swept away from me, still bundled up within the sac.

And after spending the entire night in the hospital with tests and ultrasounds, it was finally confirmed I had a spontaneous, complete miscarriage. We were sent home, babyless, around 6 a.m… We left entirely empty-handed with nothing to hold. No tangible reminder of this child, or any physical proof our baby ever existed.

I guess up until this point, when I heard the word ‘miscarriage,’ I ignorantly imagined the pregnancy would somehow dissolve or absorb or just disappear. I just never gave much thought to the fact, if a baby existed it somehow had to be delivered – and then what?

I’m thankful at least my body was able deliver the contents of my womb, baby and all, in the form of labor contractions and one single push. If this weren’t the case, the doctor plainly told me I would have needed a D&C, which I knew meant a forced dilation and surgical curettage (medical talk for scraping up and suctioning) to remove my child from me. The look of terror on my face when he told me this, alerted him to pry with some more questions.

‘So, you know what that is? Have you had any abortions in the past?’ he asked looking down at my file. ‘No,’ I said in tears. ‘I’ve just worked as a pregnancy counselor in the past.’ Up until this point, it was all sterile in the hospital room. No condolences. Just business as usual. He nodded a single nod and looked back at his paperwork. I continued, nearly pleading for his attention now, ‘So life is important to me. This life was important to me!’ He looked up and finally said it, however straight-faced and insincere it might have been. At last, my husband and I heard it for the first time that night, ‘Oh… I’m sorry for your loss.’

Maybe the word ‘miscarriage’ takes away from what this really is. Maybe if we called it by what actually happened, we’d have more understanding and compassion. Instead of saying, ‘I had a miscarriage,’ maybe the term in conversation should have simply been, ‘I birthed my baby, but my baby had already died.’

Days later, at home in my recovery, I realized my baby, that was placed in that round, plastic dish after delivery, was simply sent off somewhere. Suddenly, I needed to know where. Eventually, I was able to speak with someone at the hospital. I guess I ignorantly made some more assumptions again, but I thought I’d somehow be getting my baby back.

A burial, perhaps ashes? I needed some kind of closure here.

The nurse had to break the news to me over the phone. No, there would be no way to do anything like this. Once tested, the remains of my teeny, tiny one would simply be incinerated collectively with all of the lab’s other specimens and such. I honestly don’t know what I thought would happen after watching my baby be swept away in that take-out container. But the loss now felt so heavy, too open-ended, and just unbearable. I told the hospital I needed something. SOMETHING to see, to touch, to know this was real.

They had nothing to offer me, but I was persistent. Mamas just don’t give up on their children that easily. They referred me to someone who dealt with support… ultimately, I was given a hat. It was a little preemie hat given to the tiniest of infants born at that hospital. Sure, it was just a hat, but it meant so much. I now had something to hold.

In the months that followed, my husband built a double-sided glass frame. I wrote out my feelings, while he used his hands to grieve. This is how we found some closure together. In that frame, we placed the baby’s original ultrasound with a strong heartbeat visible, the tiny preemie hat, and a Bible verse that reads, ‘For you created my inmost being, you knit me together in my mother’s womb.’

It was beautiful, it was tangible, and it even made me smile sometimes. We hung it up in the kids’ playroom to remember that child while we watched our others play.

It was hard to be ‘ready again’ – to allow that space within to possibly be occupied by somebody else, when you’re still missing the last baby who lived there. It took time. It took prayer. It took healing.

But a third child did come. And then a fourth. And even a fifth! We know we are blessed and we are overwhelmingly joyful. But that baby of ours, born seven years ago, still mattered.

This story was submitted to Love What Matters by Michelle K. Umbehauer of New Jersey. You can follow her journey on her website, Facebook, or Instagram. Submit your own story here and be sure to subscribe to our free email newsletter for our best stories and YouTube for our best videos.