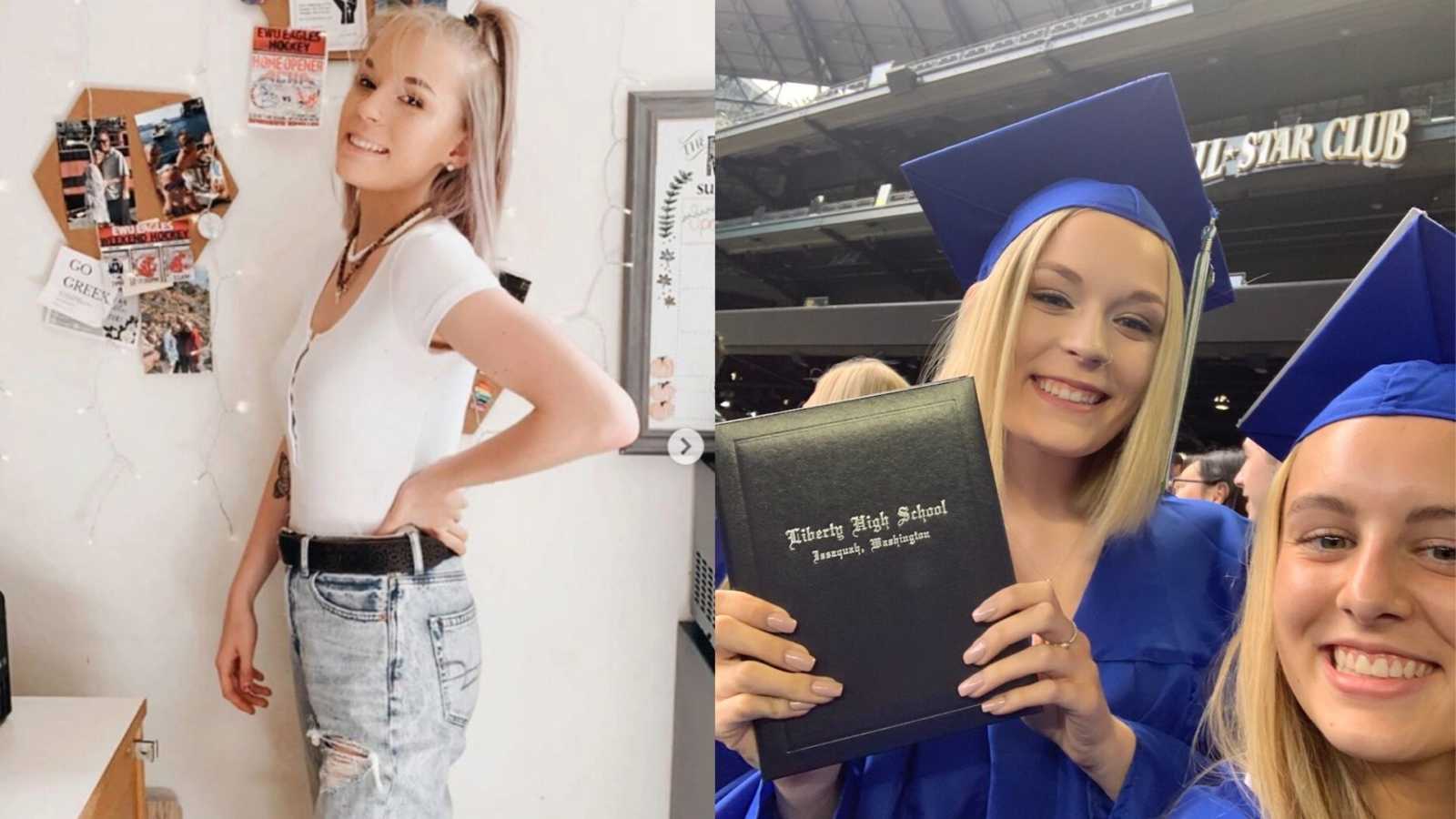 “My eating disorder journey started in March of this year. Ever since I was little, I’ve struggled with confidence and body image issues. I’ve never believed I was beautiful and I often let that determine my worth. Between January and March, I was sick with an extreme case of Mono and was prescribed Prednisone, a steroid that fights the virus. Unfortunately, a side effect of the prednisone is weight gain, which ultimately triggered the start of my anorexia.

In March, I stopped taking the medication. I threw what was left of the pills in garbage. My weight was at an all-time high, along with my insecurity level. To be honest, I was disgusted with what I saw in the mirror. I hated my body. So I began working out. I went to the gym every day, sometimes twice a day if I wasn’t satisfied with my first workout. I changed my diet and ate ‘healthier,’ but I wasn’t seeing any changes in my body. I started to obsess over the numbers on my scale, weighing myself after every workout, shower, meal, snack, and any daily activity. My restriction increased fast. I cut everything out of my diet that I thought to be ‘unnecessary,’ leaving me with only raw vegetables and meat. I got to a point with my restriction where I wouldn’t use chapstick because I was afraid I might lick my lips and accidentally swallow some of it, convinced it would make me fat. My outings to the gym slowed and eventually stopped altogether, due to my extreme lack of energy and motivation. Since I wasn’t exercising, I didn’t allow myself to eat. My family was getting suspicious so I would have a few bites at dinner and be done. But the guilt that followed would torture me endlessly.

In the depths of my disorder, I was accepted into Eastern Washington University, attended prom, and graduated from high school. I remember those important experiences pretty well. However, any downtime or normal days I had between April and early July, I have absolutely no memory of. Day-to-day life during that time exists nowhere in my brain. It’s extremely scary to hear friends and family talk about things we did together and have no recollection of it whatsoever.

On July 31st, I was admitted into a residential hospitalized treatment program (res) at Eating Recovery Center (ERC) in Bellevue, Washington. My blood test results were a disaster. I had a heart rate low of 30, I was extremely underweight, and absolutely no energy. I was practically a zombie. I knew I needed help, and I accepted going into treatment, but it wasn’t long until I changed my mind.

I was on the eighth floor of the hospital. All doors were alarmed, and I was surrounded by strangers who were either sick like me or were ERC staff. In the last few days before my admittance, my identical twin, Macee, made me a blanket to take to treatment. She wanted me to feel as much at home as possible. Unfortunately, the staff wouldn’t allow me to have it, along with most other personal items. The rules on items we could bring were strict to insure mine and all of the other patient’s safety from harm to ourselves or others. All I had at treatment with me were comfortable clothes, pictures, letters from friends and family without envelopes, a deck of cards, and closely-regulated personal hygiene essentials.

After my first full day in res, I was ready to go home. Since I was still on Red level, which I will explain soon, I wasn’t allowed into my bedroom. I sat on the floor in the hallway by my room and cried to my mom on the phone, begging her to bring me home. As I cried on the floor, a patient walked up to me and handed me a little slip of paper. He had written ‘You can do this’ on a scrap of paper. I read it and sobbed. I still have his note.

Four days later, I got to have my first visit with my family. Since we had been fighting for days, my parents thought it would be a good idea for them to come and to have my siblings come to the next visit. That was a smart decision on their part because the visit was a lot like the previous days. I spent the hour that I had with them trying to convince them to bring me home with them. They just kept telling me that they were proud of me and that they loved me.

There are three levels that patients can be on in res depending on their progress. Everyone starts on Red. Our bedroom door was closed and locked until bedtime, we had incredibly limited phone time, and were only allowed morning showers. On Yellow, we got some time in our room, a little more phone time, and were allowed to have short outings with family. On Green, we could go to our rooms during any downtime, we were allowed our phones during any downtime, we could shower at night, and got longer outings with family. If we were in our rooms, doors had to remain open, even while we slept. At night, we were allowed to close a curtain to block out the hallway light but every 20-30 minutes, staff would come into our rooms to check on us while we slept.

Meals were intense. We had assigned seats and strict eating rules. It was extremely easy to lose my identity in treatment because we aren’t treated like people. We were treated like patients. It can make you feel even more lost than you already do.

I lived at ERC for three weeks until I was finally discharged to their next level of treatment called the Partial Hospitalization Program (PHP). I went to PHP every day of the week from 7:00 a.m. to 6:00 p.m. for a couple of weeks. After being discharged from there, I dropped down to their next level of care called Intensive OutPatient (IOP). I attended IOP for three hours a day, three days a week until I went to college.

Now here I am, almost a year into my eating disorder journey. I am still in recovery and will be for a while. It’s something I’m going to live with for a long time. I’ve had setbacks already but I’ve been able to come back and learn from them. I’m spending my time focusing on my education and spreading eating disorder awareness however I can. I am incredibly proud of my progress and personal growth this far and am confident in my recovery going into the new year.”

This story was submitted to Love What Matters by Marlee Vadney from Renton, Washington. You can follow their journey on Instagram and YouTube. Do you have a similar experience? We’d like to hear your important journey. Submit your own story here. Be sure to subscribe to our free email newsletter for our best stories, and YouTube for our best videos.

‘Our beautiful, once vibrant Sarah is now a shell of a human.’ I was spiraling out of control. A monster was being born.’: Young woman overcomes eating disorder, ‘struggling is not a character flaw. You are worthy of help.’

‘You better stop, or we’ll haul you off to the loony bin with the REAL crazy people.’ My father was in a drunken rage.’: Woman overcomes eating disorder from childhood trauma, ‘I’ve found strength to set that baggage down’

‘I’m THAT girl who spent 6 months with a ring on her finger. Who planned an entire wedding, only to find out a week prior it was all a lie.’: Woman discovers fiance’s pornography addiction, ‘I felt uncontrollably numb’