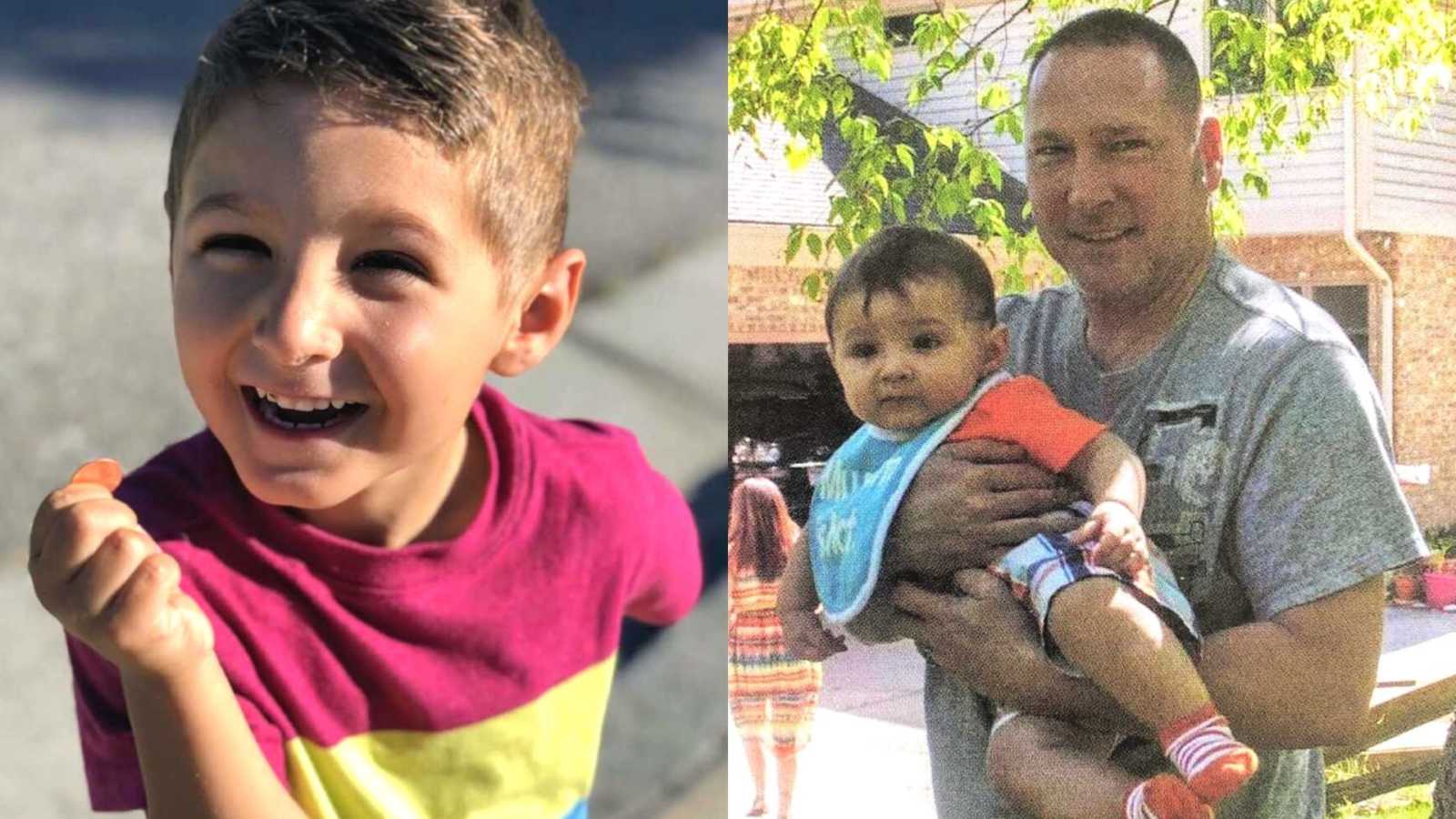 “I’ve always believed in all things spiritual. I am not very religious, but I do believe that our loved ones are all around us after they pass away.

Ever since the day my dad died, I have believed he’s still around. I’ve always thought of it as him just being on a new wavelength that I cannot see. But I believe he’s constantly near us, supporting us from a different vantage point. While I miss him, I still can feel him. Truly believing he is still here has brought me a lot of peace throughout the last four years.

He sends me signs all of the time. At first it was pennies. My kids and I would see pennies everywhere. We still do and we still thank him every time we find one. It was the first tangible sign I could show to my kids. It was the first way I could still give them that connection with him. Those pennies mean the world to all of us.

When we decided to have a 6th baby, it shocked a lot of people. We couldn’t even explain why we wanted to add another one but we just somehow knew it was the right decision. We waited until birth to find out the gender and waiting was one of the best surprises of our entire lives. We had four biological daughters, then adopted our son, and then we birthed a son. Giving Easton a brother was one of the most magical and amazing things we have ever done. The first thing he did when he met his new baby brother Bowie in the hospital was sing ‘you are my sunshine’ to him. It’s like he knew he was just given the best gift, straight from his parents in Heaven.

Bowie just turned one in quarantine at the beginning of May. Two days after his birthday I was in the kitchen with my hands deep in ground beef, making hamburgers for dinner. Easton walked into the kitchen and asked if he could help. I told him he could help me cut up the veggies for our salad after I was finished making the hamburgers. He hung around my legs sort of just twiddling his fingers. I could tell he wanted to tell me something. I said, ‘Is everything alright, bud?’

He looked up at me with his big brown eyes and announced, ‘Did you know I know who Bowie is?’

I said, ‘What do you mean?’ I was a little confused by what he was saying. But he kept the conversation going.

‘I know him!’ he stated again.

‘Where did you guys meet?’ I figured I needed to ask in a different way.

‘When I was a baby and a little kid before I came to be your baby!’ His answer was so matter-of-fact. Like he knew exactly what he was saying.

‘That’s really cool! Could you see Bowie in Heaven?’

And with that declaration, he walked away. I stood there at the counter with my hands in this bowl, truly taken aback. I didn’t even know what to say. It was one of those clear-as-day memories I think will forever be burned into my brain. Kids can make things up all of the time! Who’s to say he’s not just projecting a really interesting imagination?

My mind flashed back to a session I had with a psychic medium a few months prior. The sessions I’ve had with mediums over the years has brought me a ton of peace. Their ability to tap into the realm I so desperately long to see brings a calmness to my heart I could never put into words. Connecting with my dad and hearing specific messages that no one else could ever know is comforting. I walk away from each of those sessions (there’s been 3 of them since he passed) truly feeling like he’s still so close to me.

In this particular session she mentioned my son Bowie, who was about 6 months old at the time. At the end of the session she said, ‘Your dad came back to you in the form of your son.’ I remember thinking, ‘Okay, that’s crazy talk…even for me! I’m a pretty open-minded person but…reincarnation? My DAD reincarnating already? I don’t know about all of that…’

I let Easton’s statement simmer for a few days. Then I seeked out more.

‘What else can you tell me about Bowie?’ I started off.

‘That he’s my brother,’ he said as if I was asking a silly question.

‘Right. But what you said before…that he was your dad…’

‘Oh, yeah. He used to be my dad. But he told me that he’d rather be my brother so we could have more fun together.’

‘When did he tell you this?’ I was so intrigued. Even if he was totally making all of this up, I was all-in.

‘When he was in your tummy. He played trains with me in my room. He said he was going to be my baby brother and that we could play trains together all of the time soon.’

‘How do you feel about all of that?’

My mind flashed back again to the moment Bowie was born. Adding a sixth kid, in theory, would cause a lot more stress and a lot more uncertainty. But I never felt more peaceful. Our home has never been more calm. Our lives have never made more sense. Newborns usually rattle a household with how much they need to be cared for. But Bowie from the beginning has been so easy. I also haven’t cried about my dad since the day Bowie was born. My heart hasn’t ached to see him or longed to hug him. I see pictures of him now and my heart no longer sinks, I just smile so hard and thank him for the first 25 years of my life. I miss him, yes. But not like before. Not nearly as desperately.

Is it because I can feel his soul inside my tiny baby boy? I guess only time will tell if he really is who Easton says he is.”

This story was submitted to Love What Matters by Molly Schultz of Tried and True Mama. You can follow her on Instagram. Submit your own story here. Be sure to subscribe to our free email newsletter for our best stories, and YouTube for our best videos.