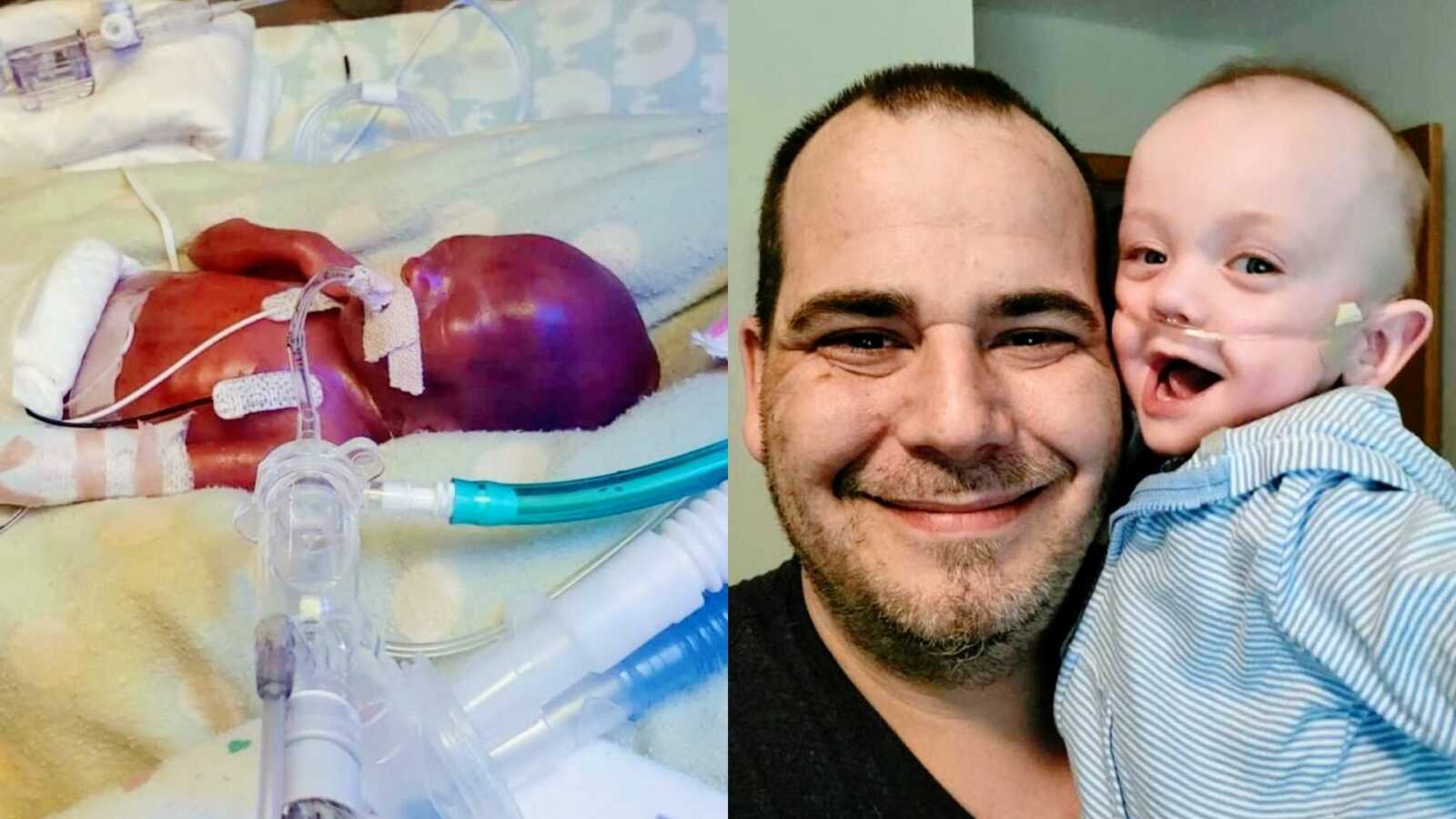 She didn’t know it at the time, but on June 6, 2020, Beth Hutchinson of Somerset, Wisconsin, made history by giving birth to the world’s most premature baby.

The new mom was just five months pregnant at the time when medical complications resulted in her premature labor.

Doctors at Children’s Minnesota hospital in Minneapolis issued a dire warning to Beth and her husband Rick. Since the infant was born 131 days early, they did not expect him to survive. In fact, they were given a 0 percent chance of survival by their neonatology team.

At birth, Richard Scott William Hutchinson was so tiny he could fit in the palm of your hand. His parents never lost hope that he would beat the odds, but his doctors knew he would have to fight hard to stay alive from the second he was born.

“I knew the first few weeks of Richard’s life would be very difficult, but I felt that if he could make it through that, he would be a survivor,” neonatologist Dr. Stacy Kern said.

Yet Richard did not die in those terrifying early days after his birth. Instead, he got stronger with each passing moment! He stayed in the hospital for six months, gaining weight and waiting for his body to catch up to his early birth date.

Due to COVID-19 restrictions, Richard’s family wasn’t able to stay with him in the hospital full-time, but they were there every moment they could be.

“We made sure we were there to give him support,” Rick said. “I think that helped him get through this because he knew he could count on us.”

In December, Richard was finally able to leave the hospital and go home with his parents.

His doctors were moved by the sight of this strong little baby who was about to start his life, all thanks to their care.

“The day Richard was discharged from the NICU was such a special day. I remember picking him up out of his crib and just holding him with tears in my eyes,” Dr. Kern said. “I couldn’t believe this was the same little boy that once was so sick, that I feared he may not survive.”

This June, Richard defied the odds by celebrating his first birthday! His parents had a cake party and spent the day counting their many blessings. They had something else to celebrate, too. Guinness World Records sent them a certificate announcing that Richard is officially the World’s Most Premature Baby ever!

“It doesn’t feel real,” Beth admitted. “We’re still surprised about it. But we’re happy. It’s a way we can share his story to raise awareness about premature births.”

Richard is now officially the most premature baby to ever survive those early odds. It’s hard to believe this gorgeous little guy was once so fragile. Way to forge your own path, Richard!

‘As a bereaved mother of a medically-fragile, premature twin, I can finally say I’ve met my ‘people.’ And the funny thing is, I’ve never actually met any of them.’: Mom thanks ‘Insta-Village’ for ‘being my source of strength’

‘We cancelled our baby shower. I went from Googling dangly monkey earrings to ‘28-week baby premature survival rates.’: Woman expecting her rainbow baby says ‘I will continue to stay home and fight to be a helper’

‘We cancelled our baby shower. I went from Googling dangly monkey earrings to ‘28-week baby premature survival rates.’: Woman expecting her rainbow baby says ‘I will continue to stay home and fight to be a helper’