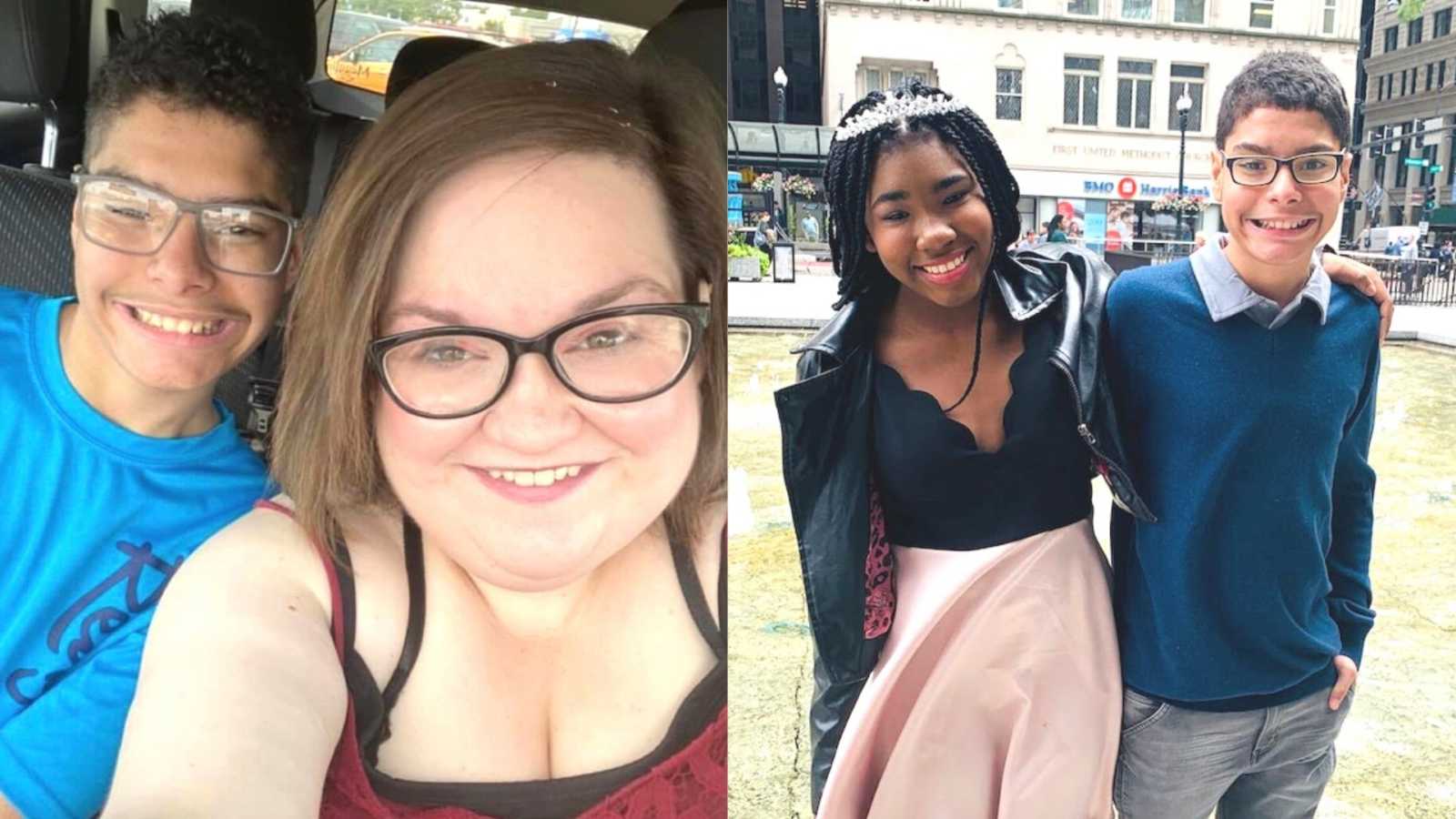 “I got a call about the 11-year-old boy in January of 2016. All I knew about him was he was in a shelter three hours away and he had special needs. When I pulled up to the children’s shelter, I distinctly remember the barbed wire and how scary it looked. I had asked the caseworker about what he liked and she told me he liked trains. I brought some of those with me and a train puzzle for us to do. We made some small talk but the little boy was overstimulated and I didn’t push very much. Kind of abruptly he asked me, ‘Would you be my mom?’ I immediately said, ‘I hope so.’ The caseworker had somewhere to be, so the visit was short.

Afterward, I was at a restaurant with my foster daughter and remember having this moment of ‘I just met my son.’ When I got home, I emailed the caseworker and said I was all in and willing to be the permanent guardian they were looking for. Shortly after, I found out they had found a family closer to the agency’s office location and were going to take Josiah to meet that family the next day. I had several foster children come and go and had never wept. I was devastated. I had just felt deep down this little boy was supposed to be with me.

As it would turn out, Josiah refused to talk to the other family, telling them he ‘already met his mom yesterday.’ This touched the heart of the director of the shelter, who made some calls allowing for Josiah to try an overnight with me. She called me to give me this news telling me, ‘Sometimes when you see a family that’s meant to be, you just know.’ Josiah’s name wasn’t Josiah then and he wasn’t supposed to be adopted but when he met with his lawyer after moving in, he told her, ‘I want to change my name and I want Molly to be my real mom.’  It was a hard road for both of us but on his thirteenth birthday, my son officially became Josiah.

I met my daughter in December of 2018. Our paths had crossed a couple of times over the course of a couple of years and I had seen her photo but had never gotten to meet her. It was supposed to be just a visit but she and I both know what we were hoping for. She was more vocal about it though on Christmas Eve, giving me a present and writing ‘Mommy’ on it several times.

We did visits for several months from a residential center and each time I brought her back, I felt like part of my heart was being ripped out. She had a lot of fear, grief, and loss to work through but she was determined I would be her mom and that she would become Mia Grace.

Mia moved in that June and officially was adopted in October of 2019. She had on a pink and black dress with a tiara. I remember driving into the city of Chicago, full of energy and life, feeling triumphant. The song, ‘Hey Look, Ma, I made it,’ was playing and that’s how it felt…. like we made it.

Around November of 2019, I started to feel ‘off’ and my stomach was upset more often than not. Mia was really first to notice, as she is a caretaker by nature and overprotective in a sense She was adopted as an infant and her mom had passed after a long illness when she was 9. By March, I could hardly get out of bed. Mia would bring me food I couldn’t keep down. Trying to get into the doctor during the pandemic was difficult and things were so chaotic. If it hadn’t been for Mia insisting something was wrong, I might have waited longer.

Finally, after lots of doctor’s visits and blood tests, I went in for a CT scan in May. One of the techs told the other tech to come to look, and I knew then I had cancer. About an hour later, I got a call from my doctor telling me it wasn’t what they had hoped and to come in and bring someone with me. My friend came in with me and the doctor showed me a scan, telling me some numbers of how big my ‘growth’ was. I asked her to compare it to something. She said ‘volleyball’ and I started laughing.

For at least two months, Mia had been telling me that I had a ‘baby’ in my stomach because my stomach was getting bigger. I was throwing up all the time. All I could think at that moment was ‘she was kind of right.’ When I got to my car, it actually hit me and I thought, ‘Oh my God, they can’t lose another mom.’ I was both Mia and Josiah’s second adoption. They had both experienced the loss of not one but two moms already and had been courageous enough to love again with me. I imagined this all to be too much the fear of losing me and the idea of me being sick. I felt all their hard work slipping away with one doctor’s visit.

It turned out it was, in fact, cancerous a granulosa cell tumor. I had it removed on June 5, 2020, the day before I turned thirty. I wouldn’t find out until after surgery if I would need chemotherapy or if I would get to keep my uterus. I wish I could say in the weeks preparing for surgery I was the pillar of grace but I wasn’t. I tried to play it off for them. We named the tumor ‘Tommy,’ since Mia called it my tumor baby. I was scared though and the tumor was pushing on my organs, causing a lot of pain.

Instead of falling apart under the pressure, though, my kids stepped up. Instead of pulling away from me to protect their own hearts, they chose to love me through it and love me hard. Yeah, we all have moments but I remember always thinking, ‘Wow I have never felt so loved.’ I woke up on my thirtieth birthday tumor-free. It had been my dream to watch my kids see the ocean for the first time for my birthday but instead, I got to watch them love hard.

I found out about a month later my cancer was stage one A and I wouldn’t need any chemotherapy. I am immensely grateful they chose me to be their mom and still choose me every day.”

This story was submitted to Love What Matters by Molly from Dixon, IL. You can follow their journey on Instagram. Do you have a similar experience? We’d like to hear your important journey. Submit your own story here. Be sure to subscribe to our free email newsletter for our best stories, and YouTube for our best videos.