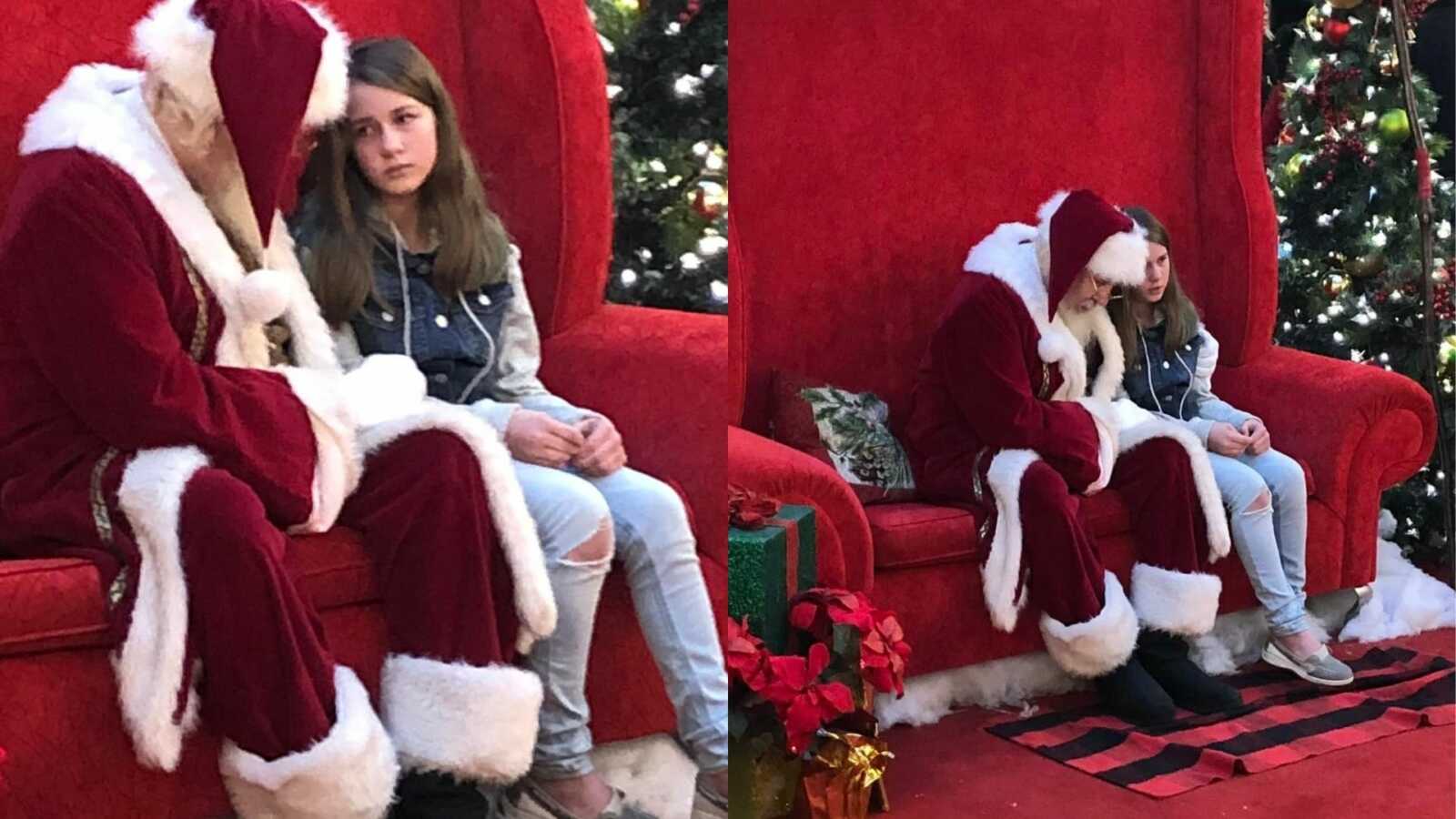 “The kids got to see Santa today.

After they were done and started to exit, Santa patted Haidyn’s leg and asked her to stay an extra bit.

She was obviously very emotional as he talked to her.

He was so gentle and kind and whatever he was saying to her impacted her deeply.

Despite the long line behind her, he stayed focused on Haidyn as they talked for a couple of minutes until she was comforted enough to leave.

She gave him a big hug and then joined us.

When she was done we asked her what that was all about.

First, she just said it had to do with what she told him she wanted for Christmas.

She ‘knows’ about Santa so I prodded a little further because, umm, I kind of need to know what she asked for.

That’s when she broke down and told us that she told him her only wish for Christmas is to have her best friend, Brooklynn, move back to Indiana.

He held her back after the boys had left so he could talk to her in private about her wish.

He told her that he knew how much she misses Brooklynn and that if he could, he would do anything to make her move back happen.

Unfortunately, that wish is simply outside of his realm of magic.

He talked to her about her friend and about their relationship and how much Brooklynn is missed.

I know this Santa gets paid to sit there whether he takes the extra time or not.

In fact, I’m sure the company he works for would rather he push the kids through as fast as possible since they make their money through picture sales and more visits mean more pictures.

Regardless of that fact, he took the extra time to talk to and then truly LISTEN to a 10-year-old little girl and comfort her heartbreak.

He didn’t need to do that.

She knows her parents play the role of the gift-giving Santa.

She knows that there isn’t magic during this season in the traditional way kids think of when they think of Santa.

Yet he decided it was worth his time to speak to her heart.

What this Santa didn’t know is that Brooklynn and her mom and sister are coming to Indiana on Sunday as a surprise for both sets of kids.

He didn’t know that while the wish for her friend to move back won’t come true, she will get to spend time with her.

He didn’t know that he IS helping make this Christmas extra magical for my sweet little girl who thinks she knows the secrets behind Christmas and the true magic of the season.

I just wanted to give a shout-out to the Santa at University Park Mall today.

If you know who he is, I would love for him to know how wonderful he is for doing such a simple thing.

Even if we weren’t already surprising her with a visit, taking the time means so much to me.

I told my two littlest boys that while the Santas we see at places like the mall are almost always just his helpers so all the kids get a chance to talk to him, sometimes the real Santa pops in and takes a turn.

I agree with the littlest one and I think this may have been one of those times we got to visit the real Santa.

Merry Christmas everyone and I hope you have some magic and love in your own lives this season.

UPDATE: The girls were reunited today.

I don’t know if I have received that many hugs from my sweet daughter in a long time.

As she gave me a final hug before going to bed she whispered, ‘Best Christmas EVER! And you’re the Best Mom!’

I’ll take what I can get.

UPDATE #2: Santa has been found!

Thank you so much Dieter Schneider for perfectly embodying the role you play in the lives of these children and our community.”

This story was submitted to Love What Matters by Carrie Noël. You can follow her journey on Facebook. Do you have a similar experience? Submit your own story here. Be sure to subscribe to our free email newsletter for our best stories, and YouTube for our best videos.

‘I’m not sure I will get to meet Santa.’: Boy fighting leukemia gifted magical day to ‘be a kid again’ at North Pole