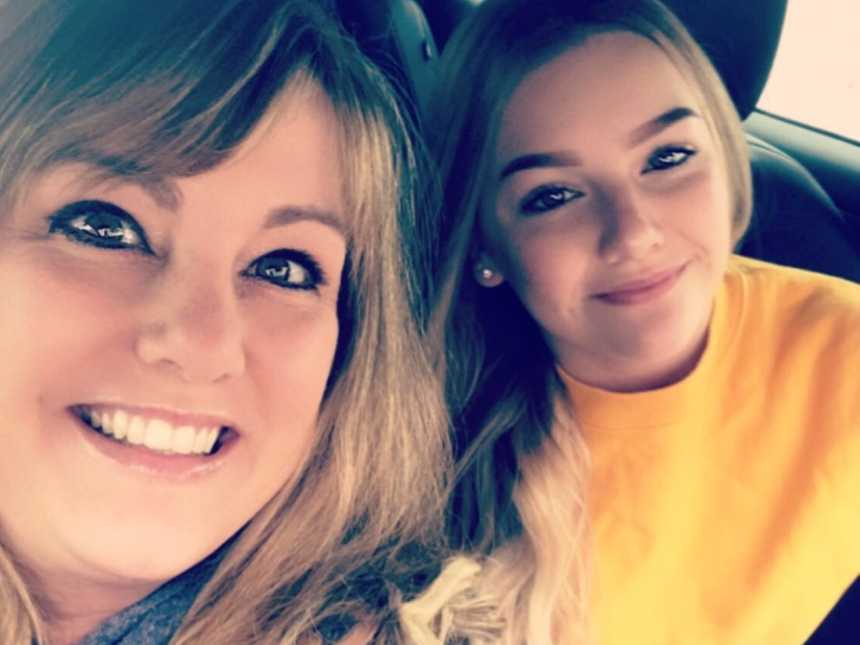 Ahhhh, summer. That magical time when you’re excited that your kids are going to be out of school and home to spend time with you.

For about five minutes.

Suddenly, in between all the fun things you have planned and events you’re going to do together, you realize your sweet little Susie isn’t so little any more and she’s turned into (insert scary music here), a teenager.

Alright, take a deep breath. It’s going to be ok. I think. I mean it has to be, right? As you know by now, my husband passed away almost two years ago from pancreatic cancer. I write about my grief. I’m pretty raw and very honest about my life because I think sharing my journey is important if it helps people, but even sometimes I get burned out and don’t want to talk about it. And this week, I don’t want to talk about death. I don’t want to talk about grief. I want to laugh, and I want you to, too, so with summer here and teenagers at home, I just couldn’t pass up an opportunity to let you into that part of my life, too.

Now listen, my editor made me clean up the language that really goes into this post but you’re still going to be offended if your don’t have a good sense of humor. So if you don’t think making fun of your kid is funny, then just don’t read this. In saying that, my daughter has read it and not only did she give me the seal of approval, she laughed all the way through. Because it’s true. And it’s funny.

I do a lot of thinking as a single mom, and I had an epiphany the other day. You see, For thousands of years, philosophical masters have tried to figure out where the “Seven Deadly Sins” came from and what exactly they mean. They’ve literally gone to the ends of the earth doing research into it and some even died not knowing the answer. Well, listen, I’ve figured it out. No, it wasn’t the Greeks or the Romans or some Biblical character. It was a mom describing her teenagers. And here’s why:

“Lo, you there, child.” A mother yells out to her teenager.

“Whaaaaaaaaat? Why thou callest me while I am sleeping?” He answers.

“Fetch me a water pail, so that I may draw your father a bath.”

“But, child, he works his hands to the bone for your comfort. He is weary and hungry upon his return. A hot bath will ease his tired body.” The mother tries to reason.

“Alright then, I shall do it myself.”

“Moooooooooom.  Why you gotta be like that? Why you gotta make me feel guilty while I’m trying to sleep? Why don’t you just ask?”

Oh, give me a break. Kids are lazy, they always have been and we let them get away with it.  Now, it saying that, I honestly have always thought that teenagers need more sleep than most people, so I always did try to let my kids sleep. But, like 14 hours a day? I wish I could do that. Not only can I not fall asleep very quickly, but I can’t stay that way. If one thing or another doesn’t hurt, it’s the middle of the night bathroom visit that really wakes me up. How in the world do kids hold their bladder for that long anyway? Especially after all the crap they’ve ingested all day. Does Mountain Dew have like some kind of mystical power where they don’t have to pee in the middle of their slumber? Is it hibernation? I watched a documentary on bears the other day and no shit, they can sleep for seven and a half months. IN A ROW. Are our kids bears? Is this natural? Are they preparing for the winter? Zombies? I’ve found my kids sleeping everyplace. In beds, in closets, on the floor, in the kitchen, in chairs, in the car; everywhere. I seriously think this goes back to the fact that their body is mad at them for filling themselves up with crap and it puts then in a mini-coma to digest it all. But yes, even I can get my kids to do chores. Lots of threats, bribery, crying, but eventually, they help. One time, my daughter was so excited to show me how she cleaned up her room really nicely, and boy did she. It was beautiful. Everything in it’s place, cleaned out. Neatly arranged. Even some big things were missing, but that’s ok, it gave her space. Until I found all her crap in the guest room the next week. I love parenting.

Time for me to wrap up this up because my dog is barking and growling into thin air. I’ve told him to stop sixteen times but he listens as well as my 15-year-old. In all seriousness, friends, try to remember back when you were a crazy kid. All those hormones, mixed messages, pressure, stress – it’s all natural. They’re going to get through it. And so are we. I hope.”

This story was submitted to Love What Matters by Diana Stefano of Idaho. Submit your story own here, and subscribe to our best stories in our free newsletter here.

Submit your story own here, and subscribe to our best stories in our free newsletter here.