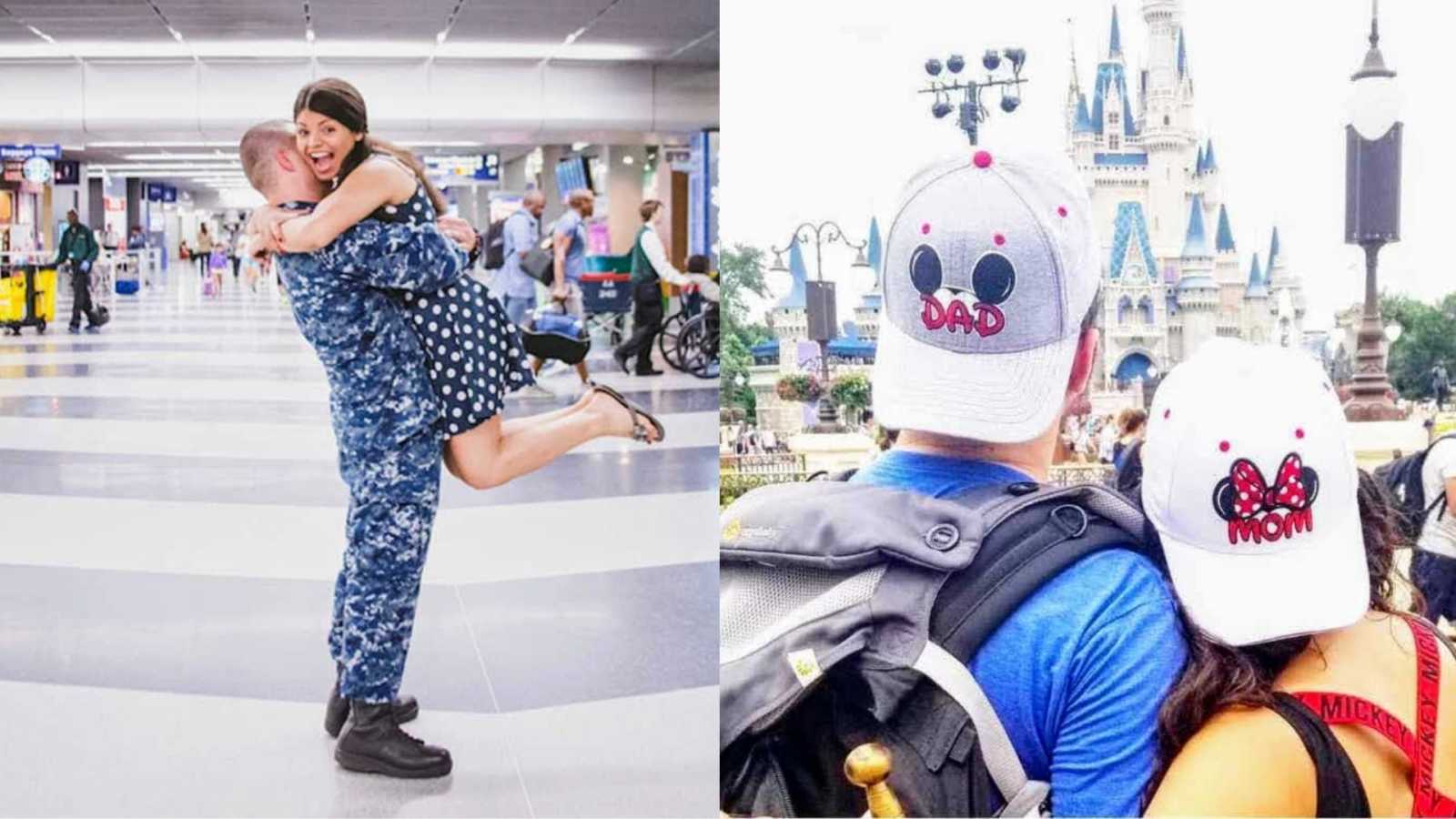 “‘She’s the kind of girl I would marry,’ Tim said about me to my cousin while we were in Vegas.

My husband, Tim, and I took a gamble of our own after meeting in Vegas. And it has turned out to be our best gamble ever.

Tim and I met in Las Vegas on January 14, 2011. I was with my cousin and her friend for my cousin’s birthday, during my winter break from law school. Tim was there with his brother following a seven-month deployment with the United States Navy. His and his brother’s flight was set to leave Vegas the night we met. But, we met and he thought I was someone he could not pass up an opportunity to get to know. So, he rescheduled his flight, unbeknownst to me.

Now, I do not believe in love at first sight, but if I did, that would have been the time for it. I do believe when you know, you just know. I can not adequately put into words how it felt, as I’m sure no one can who has felt that way, but the feeling of just knowing is exactly what happened in the moment we met.

After parting ways that first night, I sobbed as I walked back to my room. In full transparency, I had a long-term boyfriend at the time, but I had been having doubts about the relationship. After meeting him, I knew I had to be honest with everyone, including myself, and I knew it was time to follow my heart, despite how scary it had always seemed. I also knew following my heart, unfortunately, meant breaking someone else’s. Ultimately, though, I realized I deserved to be happy and loved in ways I had longed for. Everyone deserves those things.

The morning after we met, I woke up to a voicemail and text from him. Acting completely out of character, I texted him back. And, well, the rest is history. Tim wound up postponing his flight two more times to hang out for a few more days. In retrospect, I am very grateful for his spontaneity and those days together, because I came to learn just how precious a few days with one another are.

When we each got back from Vegas, life was a bit hectic, so we took the time to work on ourselves and evaluate a prospective relationship. At the time, he was stationed in Norfolk, Virginia, so we went between Norfolk and New York City, where I lived, every two to four weeks. People thought we were moving fast, but we were simply moving at a pace that felt right.

Then, in June of 2011, Tim received orders to report to Hawaii that fall. He was nervous to tell me, and when he did, I was beyond devastated. We were being put to the test — again. For the first time, I started having serious doubts about long distance. New York to Hawaii just seemed way too far a distance for any relationship to endure. Yet, Tim reassured me he was fully committed and our relationship could endure it. We would visit one another as often as we could. This would be just a small portion of time in the grand scheme of a life together. I trusted him and decided to once again follow my heart.

In October of 2011, we celebrated Halloween and his birthday early, and prepared for his move. The night before his flight, we cried in each other’s arms. The next day, I felt the saddest I had ever felt. I even briefly told myself I could not do it — I was just going to move to be with him. With time, however, I adjusted to the new 5,000-mile distance between us, and I stayed on the East Coast to follow my dreams.

Over the years, we managed as best as we could. We spoke daily on the phone, Skyped weekly, and visited each other every two to three months — aside from when he was deployed in the summer and fall of 2012. I started blogging to cope with the extended time apart.

The hardest parts for me were: (1) not really having friends or family who could relate to long distance at the time — most people I knew who had done long distance were reunited with their partner by then; and (2) having to accept Tim and I were living separate lives when we were apart, because I wished so badly we could just be together. I therefore focused on my studies and on saving money so I could visit him as much as possible.

We tried to stay connected across the miles in different ways. In 2013, we entered a Valentine’s Day contest for long distance couples — two weeks after it had begun — hosted by Southwest Airlines and Bryant Park NYC. I had never entered a contest before, but that one seemed like a perfect first. We asked our family, friends, and social media networks to vote for us, and vote they did. We won! The big prize was roundtrip tickets. In November of 2013, I used the tickets to fly to Las Vegas to meet my family and Tim there — not knowing he was going to propose! We got engaged on November 2, 2013.

After graduating law school, I temporarily lived in Hawaii with Tim while I awaited my bar results. In the fall of 2013, I moved to Chicago for work. Tim ultimately made the decision to honorably separate from the military and join me in Chicago in the summer of 2014. We got married November 16, 2014, on the East Coast, where we now live with our two sons.

Through the years, I had people, some of whom were also in long distance relationships and some who were just intrigued, ask how we did it — choosing to stay together while also choosing to remain apart. There really is no simple answer, especially because every relationship is different. What I can wholeheartedly say is it will take a lot of quality communication, effort, trust, love, and faith.

Tim and I always said ‘I love you.’ We always wished each other good morning and good night, no matter how busy our days. We worked together through our issues. We made the most of our visits, making sure to live in the present and not dwell on the impending ‘see you later.’ And we made a choice every day to prioritize one another and our relationship.

The hardest parts were feeling alone in my long distance experience back home, because not many others I knew were apart from their partners, and having to accept, together, we were living separate lives. Tim would always remind me the time apart would eventually be a ‘blip’ in our life together. While that has turned out to be true, it was sometimes difficult to believe in the moments I really missed him and just wanted to be a ‘normal’ couple. In those moments, our ‘now’ seemed so far away. Our story is proof it is okay, and very possible, to fall in love with someone who lives far, far away. One of the biggest hurdles is to simply let yourself. Let yourself fall in love. Yes, there will be tears and lonely nights. But it can also be the most romantic, passionate love story you could ever be a part of.

You will look back on those long distance days and feel like together, your partnership can conquer anything. You will feel stronger because of those days, and your relationship will have a solid foundation because of them, too. Because if you can live apart from your love most of your dating days and succeed, then together, you can overcome a lot.

Sometimes, I look back fondly on our long distance days because it still amazes me how our love carried us while being thousands of miles, bodies of water and, at one point, continents apart for years. These days, that same — yet different — love continues to carry us. And I am so grateful for it.

Ours is a love story that has withstood distance, doubt, fear, and darkness. It has given us the greatest gifts in the form of our sons. And it is based upon a love that has prevailed despite the odds and that continues to evolve, grow, and thrive. We know together, we can conquer anything.”

This story was submitted to Love What Matters by Jacqueline Hernandez Lewis. You can follow their journey on Instagram and blog. Submit your own story here, and be sure to subscribe to our free email newsletter for our best stories, and YouTube for our best videos.

‘We had a long-distance marriage, and adopted a teenager. Yes, you heard that right. We adopted a 14-year-old teenage boy when I was 27 and my husband was 31.’