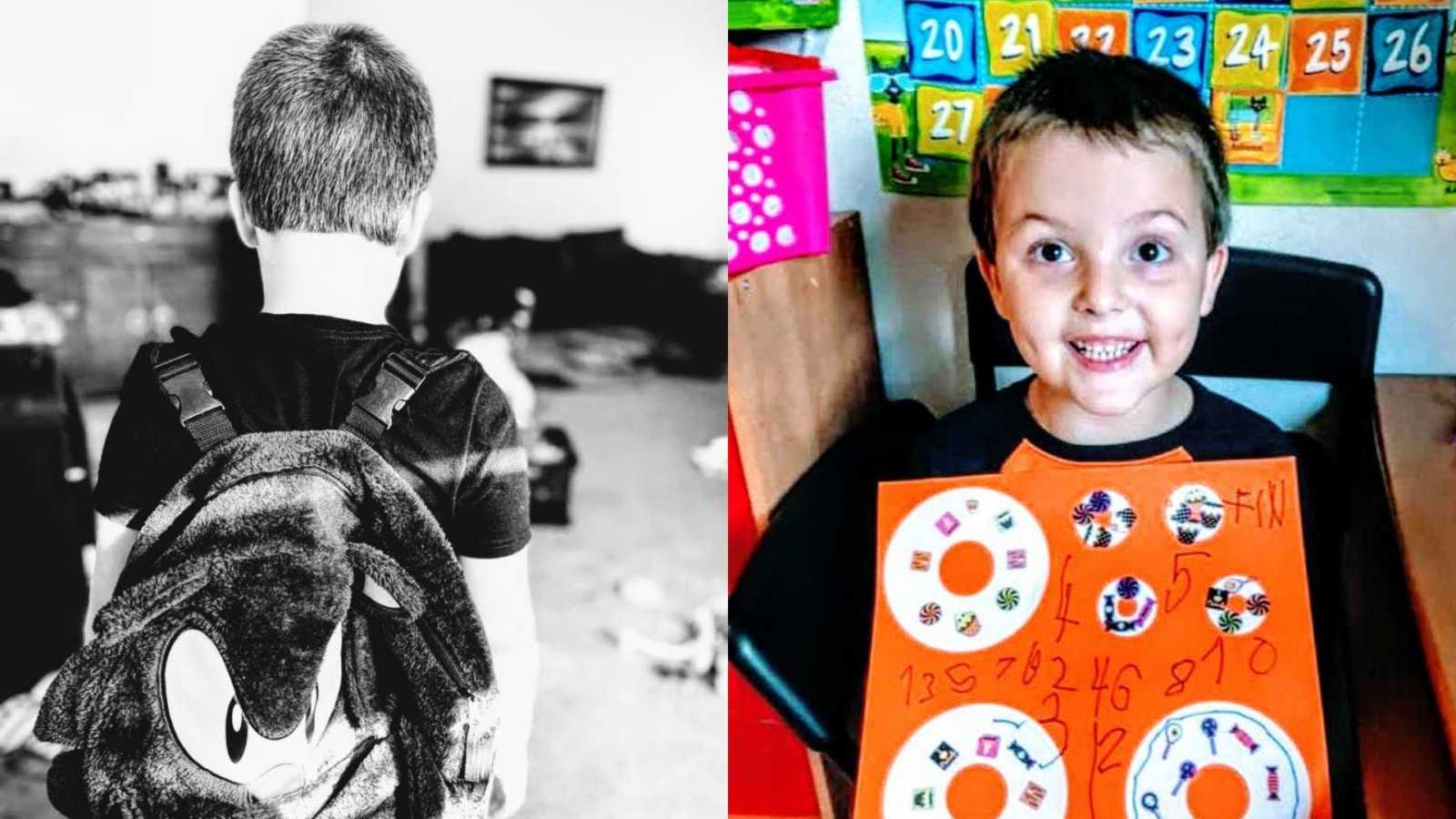 “A paper being stapled to a child’s head as a ‘reminder’ to bring a water bottle from home.

That is the latest ‘alleged’ abuse story circling the news this week about a special needs student and an aide.

But this is just one of many, believe it or not.

An aide’s hand placed around a child’s neck.

A shoe thrown at a child’s head.

A child being hung by his belt from a blackboard by his teacher.

Students bullying a child with a teacher’s knowledge.

A girl raped on a school bus.

Dangerous restraint methods that could kill a child.

Children as young as eight being taken away in handcuffs.

These are just a few examples.

My son is six, almost seven. He is autistic and his verbal skills are limited.

When he was five, I watched him walk into his new elementary school for his first day of Kindergarten.

I had to trust the people I was leaving him with to care for him, to be kind to him, to treat him with respect and dignity. That they wouldn’t harm him or ignore him. That they had his best interests at heart when it involved his education and in just treating him as a human being.

The first week, they lost my son from lack of supervision, even though he was supposed to have 1:1 care due to elopement issues. It took them four days for them to tell me the incident even occurred. It took the aide a half hour to even notice my son was missing in the first place.

My son tried to escape the classroom daily. Every day I would get a note saying this. He even got as far as out the door to the playground. Yet, it was a two month fight to get a lock and an alarm placed on the door for his safety. A teacher once told me my son was ‘unteachable.’

This was being said about a child who could read books and write sentences. Who could do math already even though he was considered to have ‘severe autism.’

I had sent in amazing therapists and we had all suggested new strategies to put into place to help my son. Ones that would cure his boredom of having to fill out monotonous alphabet sheets, tracing letters – things my son actually did for fun already at home.

He needed more. More stimulation for his mind. More activities to fill his days. We even provided those and a bin for him to use, for them to utilize.

But they never wanted to help him, teach him, the way he needed to be taught.

He wasn’t ‘unteachable.’ Far from it.

He just needed someone to care. Someone who was willing to adapt to how he learned.

Not someone who on the very first day I met, said to me, ‘As long as they don’t change anything’ when I asked them if it was okay if I sent in his trained ABA therapist and Occupational Therapist to assist some days.

Which honestly, it was a good thing I did, because I later found out how they were ‘handling’ his unwanted behaviors.

My last straw was when I was told instead of helping build the coping skills my child needed to succeed, when he was having a ‘hard time,’ they put him in a desk, facing the corner with headphones.

They kept him away from his peers and punished him by not allowing him to do fun group activities he enjoyed and would work towards his IEP goals, like crafts and cutting.

They simply didn’t want to be bothered to help or educate my son. According to the teacher, he was the ‘most autistic’ child out of the group.

I’m still trying to figure out what that means, since autism is simply a spectrum and there’s no such thing as being ‘more or less’ autistic.

After that day, I pulled my son out of Kindergarten after only two months. His behaviors at home and the uptick in aggression we were dealing with, was all I needed to know he wasn’t being cared for properly.

He didn’t need words to tell me. I was actually grateful, because it told me what I needed to know.

Something was very wrong. Because aggression…behaviors…it’s all communication.

And as his mom, the one who needs to protect him when he can’t protect himself, the one who knows how vulnerable he is to those who don’t understand him (or choose not to), I had to remove him from such a damaging and neglectful situation.

I feared the worst. Not just his physical safety, but his mental and emotional well-being.

Now I sit here, a year and a half later, after successfully homeschooling my son on my own, even during a pandemic, and watch him gleefully put on his new backpack.

We are taking the leap and trying again.

In the past month, I have had endless conversations and tried to ever so carefully choose.

I had literally just emailed registration forms to a new public school. The same week I read this story.

And as I’m preparing for his next ‘first day of school,’ I’m reminded of the fear and of the unknown.

I am trying to remind myself of the beautiful, loving, and helpful teachers, aides, therapists and caregivers that have graced our lives. Ones that came before Kindergarten.

So, let me be clear…I indeed know they exist. We have some I consider family.

But letting my child go out there again…for me…it’s like watching someone play that game where they stand behind you and say they’ll catch you.

All those people are supposed to catch my son, but they expect me to close my eyes and just trust that they do.

He could tumble onto soft grass and get a few bumps.

He could fall onto hard cement and crack his head open, need some stitches. Or worse.

He could leap off a 10-ft story, burning building and they didn’t even try to catch him. They didn’t even put up the trampoline or give him a parachute.

In fact, maybe they are holding the matches.

This is what it is like to be a special needs parent.

We have to trust strangers to be kind to our children, with disabilities and struggles, to not do harm.

And that if something does happen to them, we may not know or ever find out.

We can only hope our child will return safely home and that the places and people we surround them with, will  carefully see to it that our child is never a victim in stories like these.

This is why we must hold people like this aide, other adults, and people of authority responsible. There must be consequences for those who commit these horrible acts and abuse their power.

And this is also why there must be training and staff that is proactive. Many ‘hard’ situations can be prevented when the right strategies are put into place.

Excellent and continuous communication between parents and staff is essential.

Imagine being us. Imagine trying to sleep at night.

Imagine trying to let go of your child’s hand and put them with people all day knowing you truly have no idea, and praying you did the right thing.

If you know me, I say the phrase, ‘Shatter the nevers’ quite often.

Let’s shatter this one…

I ‘never’ know if my child is safe when I send them to be with other people for the day.

Let’s move forward together and take the crucial steps that need to be made, so that another special needs parent NEVER has to worry about sending their child out into the world again.

This is part of a flood the feed initiative to put a stop to abuse and crimes like these.

Have you heard about this story or others? Do you have one of your own? We need your help to make a difference.”

This story was submitted to Love What Matters by Sheryl St. Aubin of Three Little Birds. Submit your own story here, and be sure to subscribe to our free email newsletter for our best stories, and YouTube for our best videos.

‘She fell into my arms, tears falling. ‘My boy was non-verbal. He let himself out the front door.’ She tightly clutched his blanket, and described a boy just like my own.’: Special needs mom talks anxiety, missing children statistics

‘I loved him when he had words, and when he lost them. Through the sleepless nights, endless screaming, and walking in circles. I loved him even when he couldn’t say, ‘I love you.’: Mom to son with autism urges ‘all you need is love’

‘We see you put self-care on the backburner, skipping workouts and coffee with friends for an IEP meeting. You are miracle workers, moving mountains by sheer will.’: Husband pens sweet letter to special needs moms, ‘You’re the epitome of beauty’

Do you know someone who could benefit from reading this? SHARE on Facebook with friends and family.